Looking for something under $20K that boasts a bit of sporty appeal and a bit of pep in its step? Normally those criteria were completely incompatible, but Kia Australia has given Australia the budget-friendly performance hatch some have been waiting patiently for.

This is the 2019 Kia Picanto GT, a sporty spin on the South Korean Brand’s smallest hatchback, powered by a turbocharged 1.0-litre three-cylinder engine and tweaked for more joy-inducing handling.

It’s been in Australia since January 2019 and sits atop the Picanto range, being the only turbocharged variant – and indeed the only performance-oriented vehicle in the sub-compact hatchback segment overall. 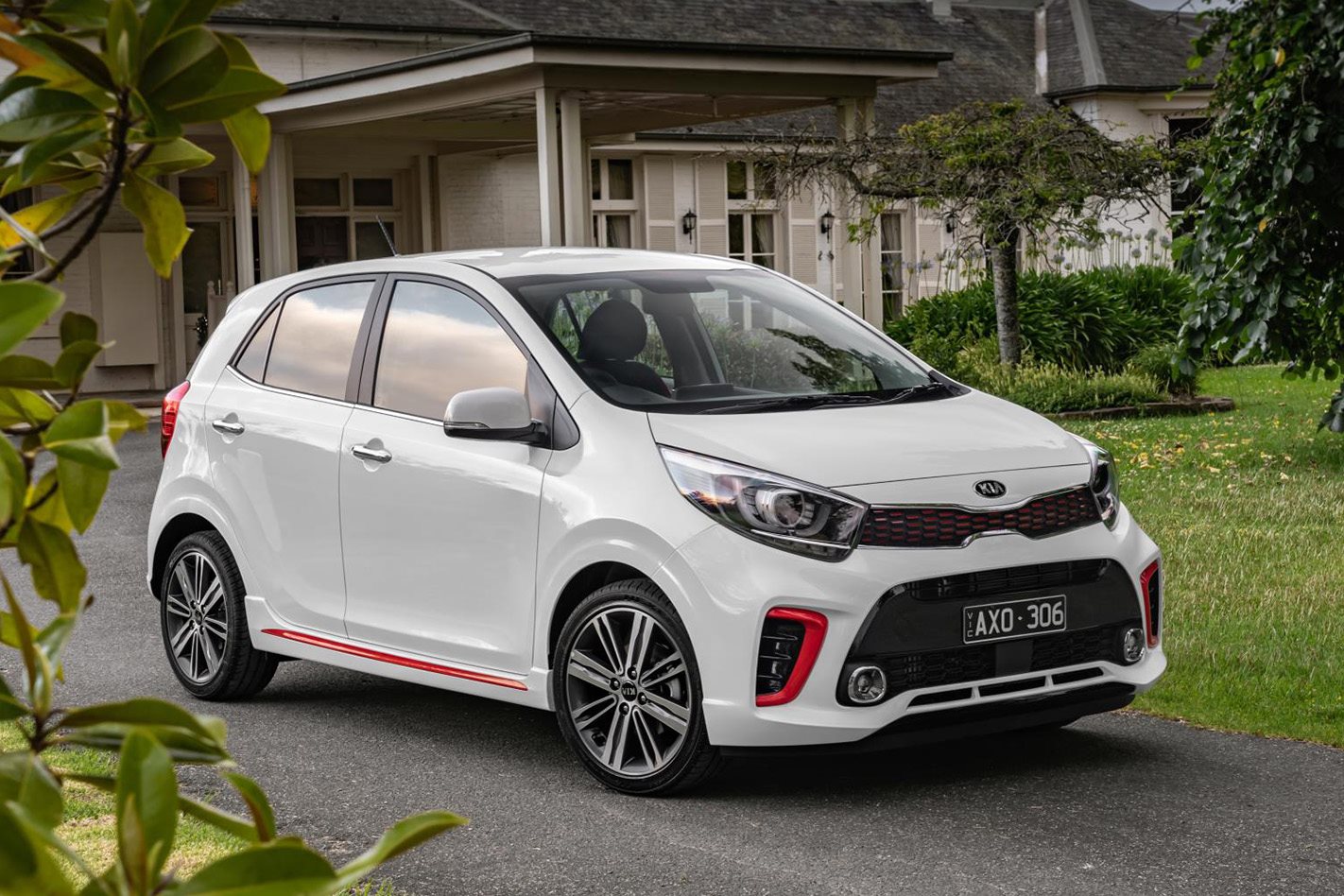 How much is the Kia Picanto GT?

The Picanto GT costs just $17,990 driveaway, which in terms of cars designed to be fun to drive, makes it the cheapest one in Australia.

For some context, the Suzuki Swift Sport might offer significantly more power and a sit in a size class above the Picanto, but its $25,490 retail sticker is well above that of the more modest Picanto GT. There are no other sporty options between the Picanto GT and Swift Sport either, so the Kia claims the title of “most affordable performance car” by a generous margin.

Within the Picanto range, the GT isn’t an enormous step up in pricing with the base Picanto S manual starting at $14,190. And while other light hatchbacks at a similar price point like the Mazda 2 Maxx, Holden Barina LS, Honda Jazz VTi, Hyundai Accent and Toyota Yaris SX all have more power and space, none are intended as sporty options. 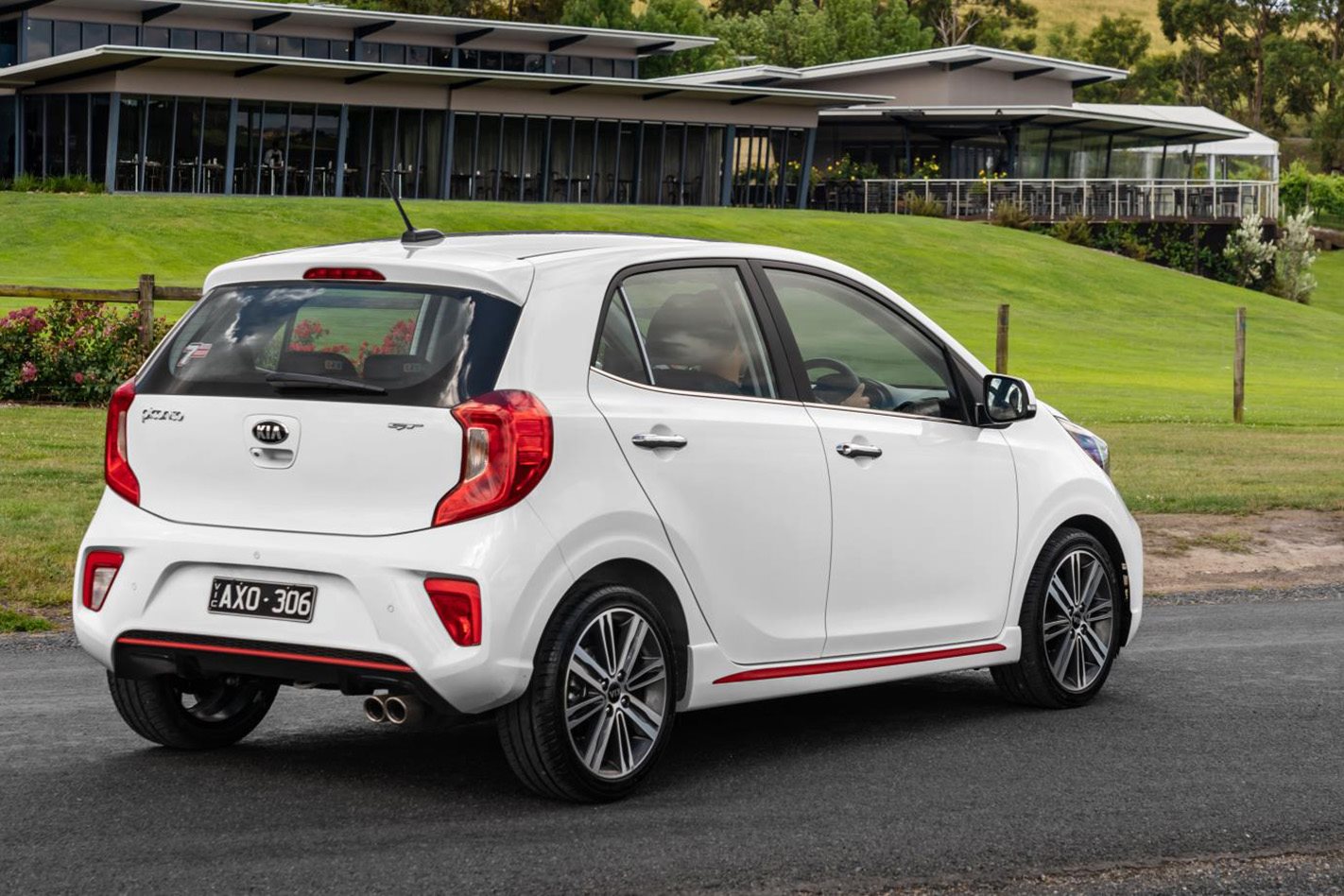 If you’re looking for a small city car that’s not going to break the budget, but has a bit of sporty character, then the Picanto GT is worth adding to the list of potentials.

Students who enjoy driving and can afford to buy new, or inner-suburbanites who don’t need to venture out of town often should consider this car.

Is the Kia Picanto GT easy to live with?

As a city car, the Picanto GT makes a strong case for itself with plenty of kit for the price and a conveniently diminutive size. Parallel parking, for example, is incredibly easy in the Picanto. The reversing camera provides a clear image and even on-screen guides for steering, so piloting it through tight streets is never a challenge. 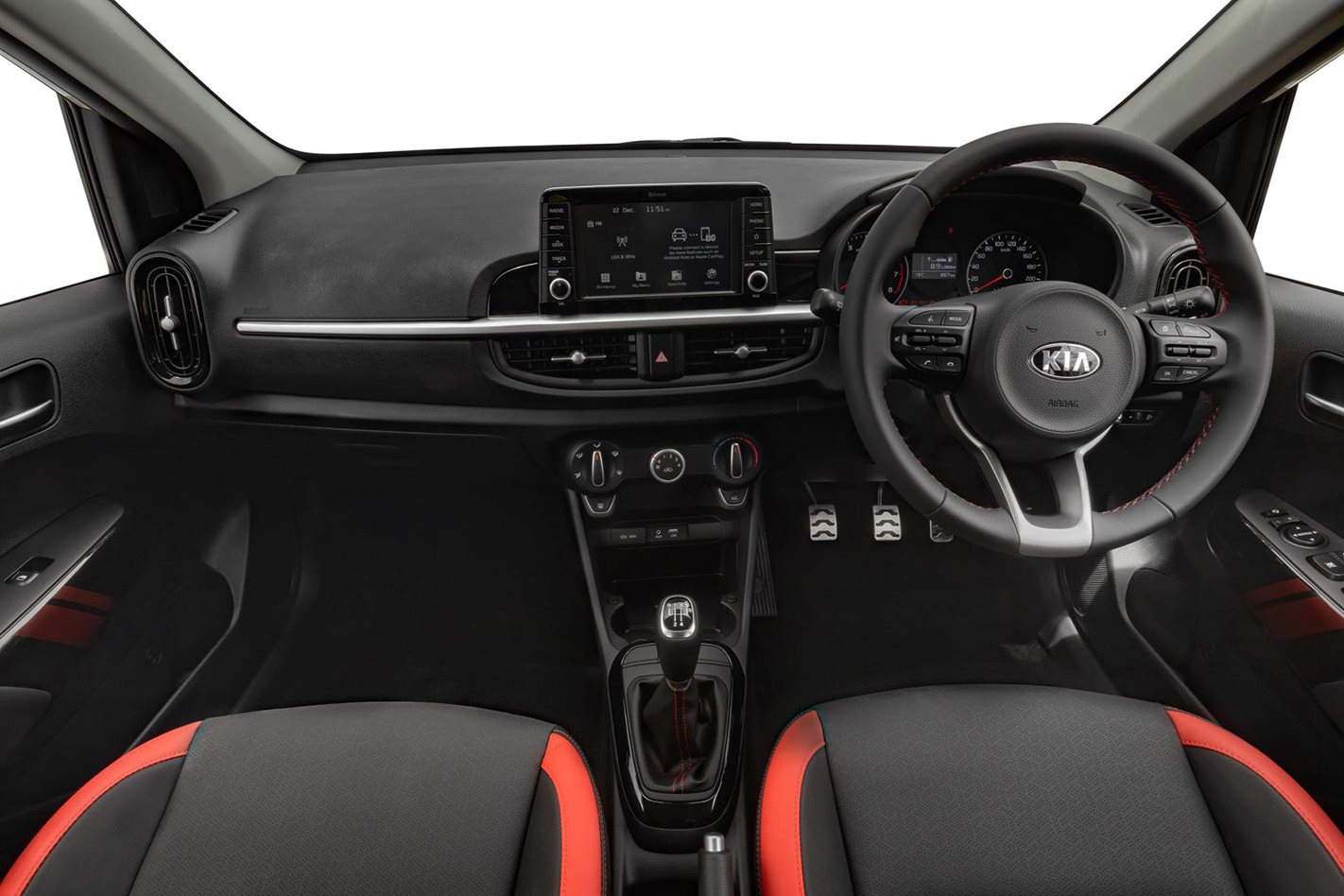 However there’s one big caveat: the GT is a manual-only offering, so dealing with stop-start city traffic might become tiresome for one’s left leg after operating the clutch pedal on a long commute.

Inside, two front passengers will find themselves with a generous amount of space for a compact hatchback, and during our test a taller (6’2”) adult found the rear seat comfortable enough on a 30-minute drive through city traffic.

For the driver, the seating position isn’t perfect but rates better than some hatches which can feel a little upright and ‘van-like’. 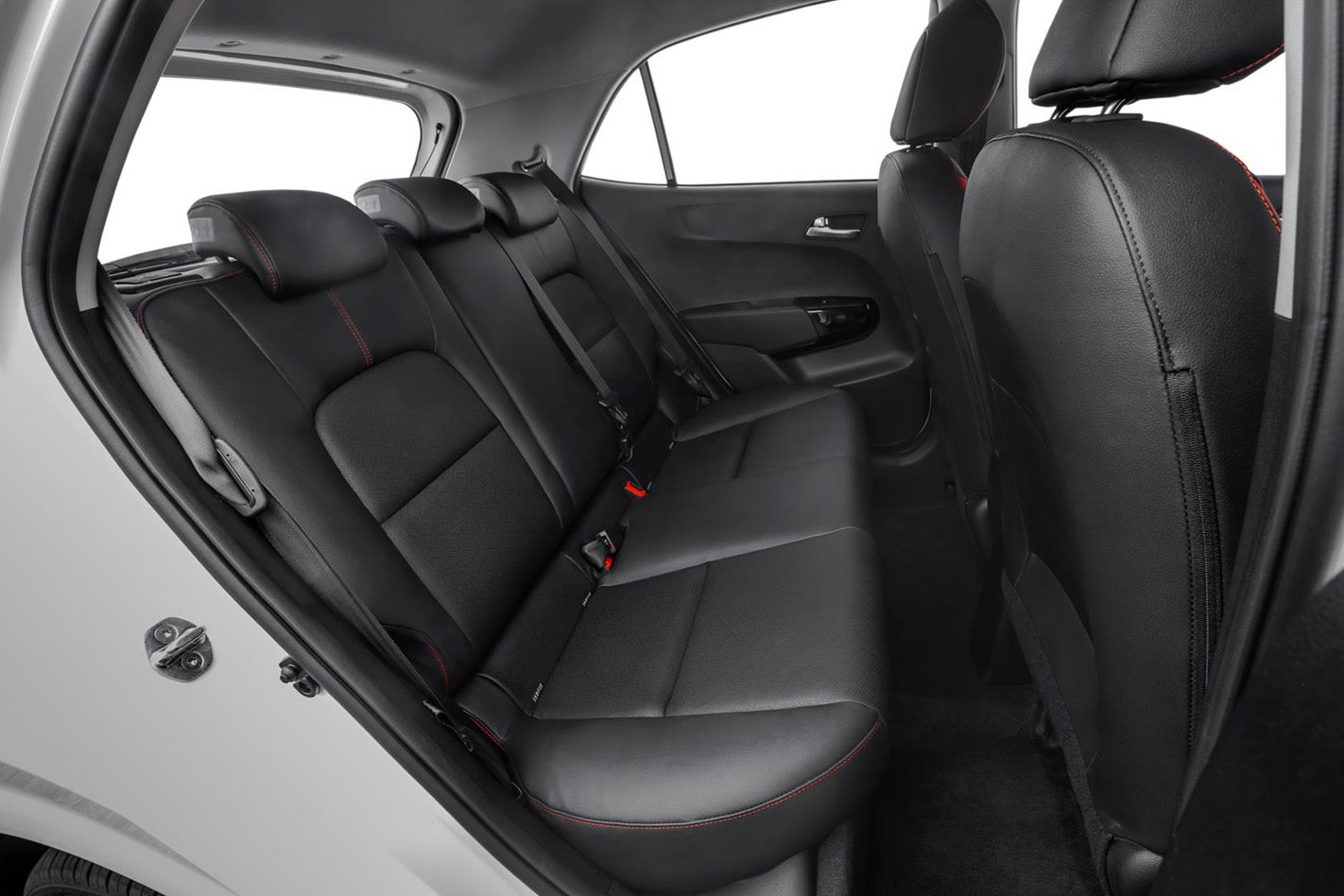 The seats are comfortable enough, but given the GT’s stiffer suspension the road surface itself has a more direct influence on comfort levels. We’ll cover that in the next section of this review.

The design and materials in the cabin are relatively spartan, though the build quality seems more than acceptable for the low price-point. Faux leather seats are a nice thought, but there’s no mistaking their synthetic feel and we can’t help feel that a decent cloth or microfibre upholstery would impart a more premium feel and change the cabin ambience for the better.

Infotainment features a digital radio tuner and Bluetooth phone/media streaming, but no built-in sat-nav. For that you need to utilise Apple CarPlay or Android Auto smartphone mirroring, which thankfully is standard-issue in the Picanto and makes the big touchscreen interface very easy to use. 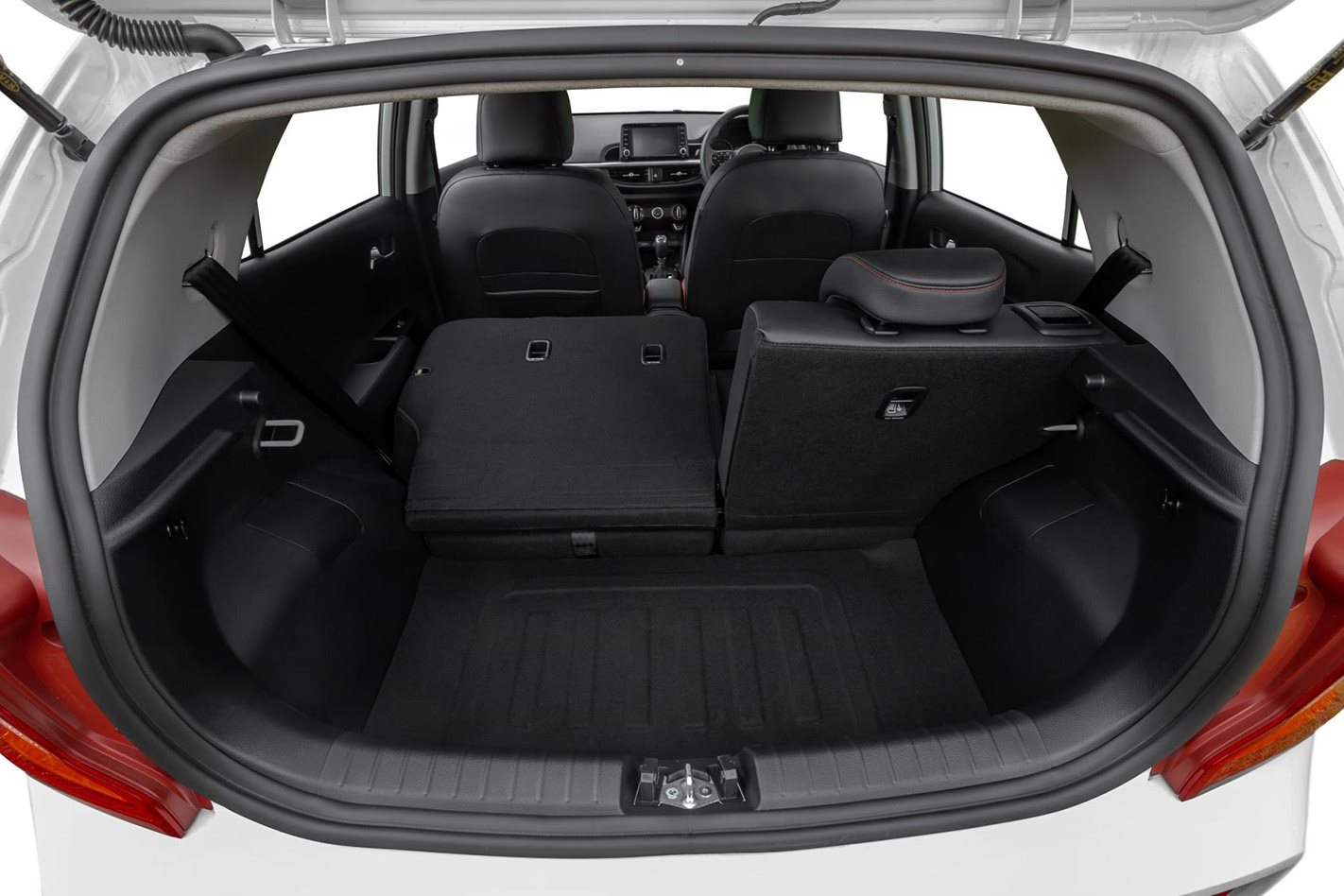 In terms of storage, the Picanto’s 225-litre boot is rather remarkable for the car’s overall size. With the rear seats folded down, it becomes spacious enough for several reasonably sized items of luggage, and can even fit a bicycle with some clever manoeuvring.

Thanks to its small turbocharged engine, the GT boasts a lower fuel consumption claim than its stablemates, an impressive 4.8 L/100km. Unfortunately we didn’t have the opportunity to verify this, as the tank didn’t run empty for its stay with us. However even on a lively drive out of the city, the fuel gauge’s needle barely dropped.

How well does the Kia Picanto GT drive?

Around town, the Kia Picanto GT provides a fun drive without the risk of licence-jeopardising acceleration, and even though its suspension is stiffer, it still rides well enough for a car in its pricepoint.

It’s also rather manoeuvrable, thanks to a 2.4-metre wheelbase, without detracting from its stability while driving around town. 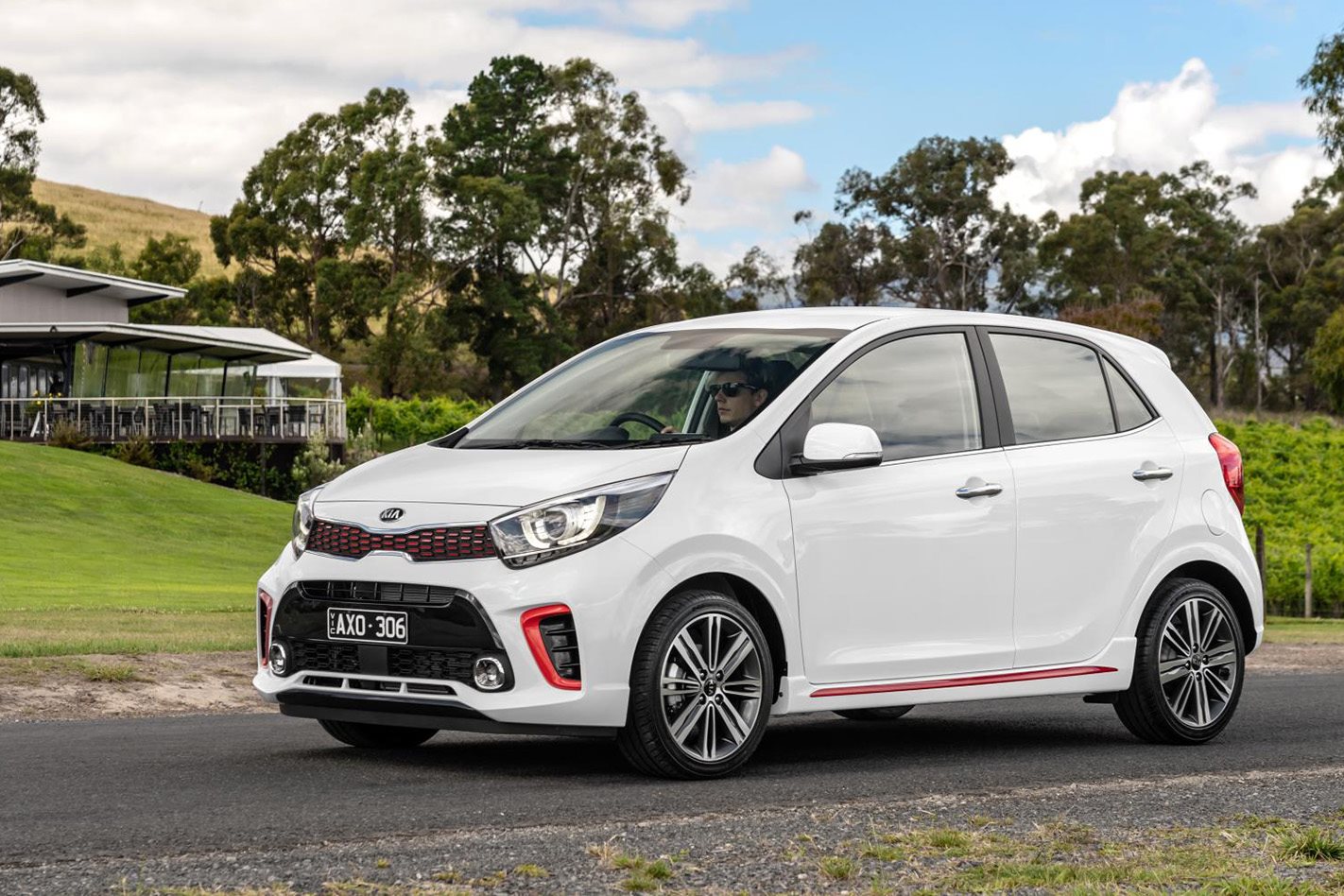 As long as you’re not attempting to hook into corners like a rally driver, the Picanto can be fun to steer, but it’s not a hot hatch that can be grabbed by the scruff of the neck and manhandled - smooth inputs achieve better results when hustling the Picanto hard. Having said that, the Picanto GT feels competent and stable in urban driving.

Once the Picanto GT ventures out of city limits, its lack of power and chassis talent starts to become more obvious, with acceleration up to 100km/h taking in excess of 10 seconds (Kia has published no claimed time) and tyre noise becoming intrusive.

On a long, open, and winding road, the Picanto GT can be fun when able to keep up to speed, but sharp corners can’t be taken quickly without understeering, which means rowing back through the gears. 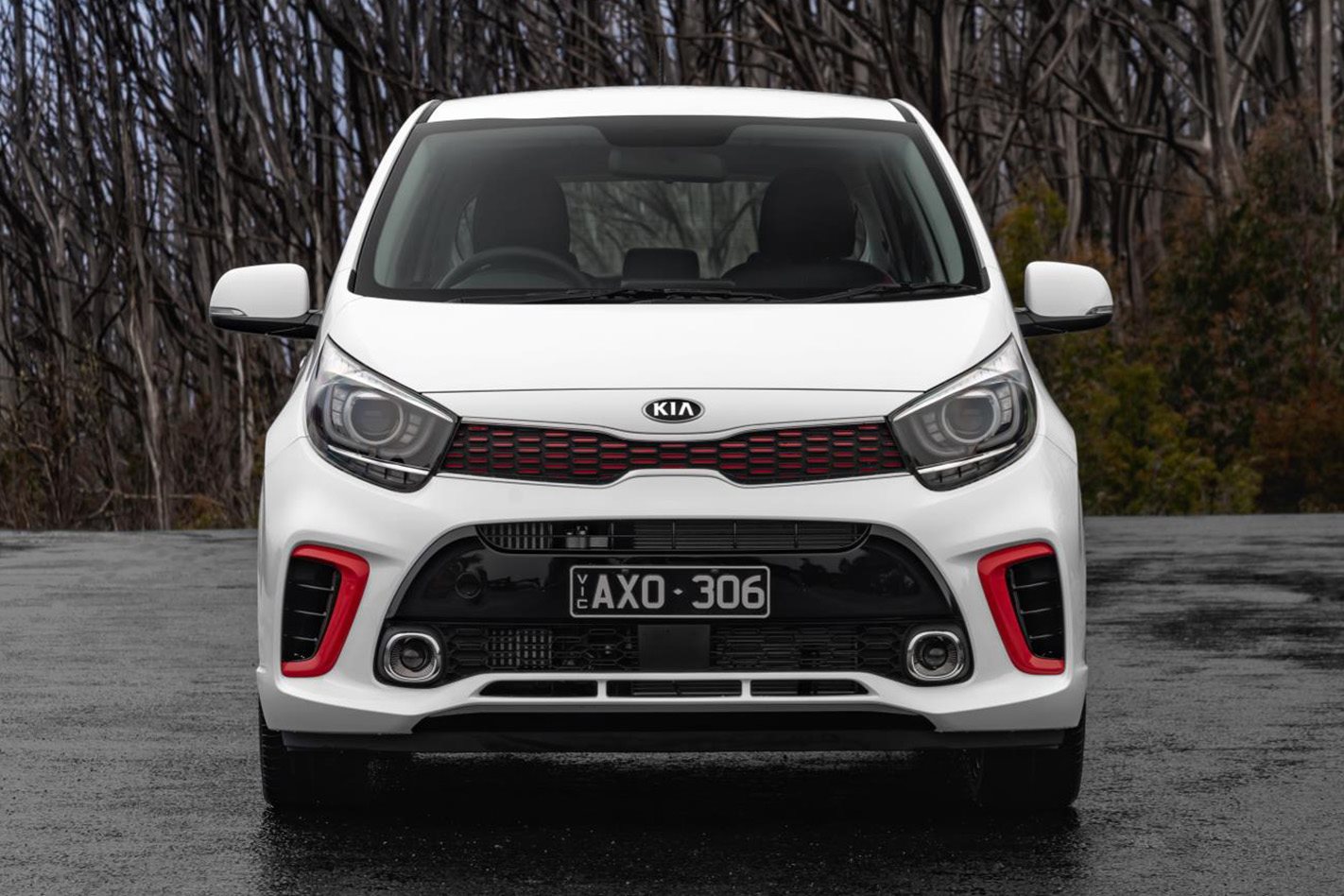 Speaking of which, the first two gears are quite short followed by a long third gear – that ratio gap sees the engine drop out of its power band, delaying progress. The Picanto GT’s turbo engine may have class-leading torque, but sadly the gearing doesn’t exploit that.

Luckily, the Picanto GT only weighs 1041kg, so it’s not too harsh on perishables like brakes or tyres, even though its standard tyres are more focused on economy than performance. Best not to think of this one as a proper hot hatch, then.

As a small city hatchback focused on providing a little bit of edgy style and extra pep on a budget, the Picanto GT hits the mark pretty darn well. But start treating the GT like a performance car or a hot hatch, and the facade starts to fall apart. Perhaps Kia should’ve left its GT badge for the likes of its big brawny Stinger GT, or the genuinely capable Kia Cerato GT.

In its own right, and forgetting the badge, there’s a lot of fun to be had in the sportiest Picanto, and its three-cylinder engine has potential... if only the rest of the car was tuned with performance in mind.

Smooth roads and long bends seem to suit the Picanto GT more than tight windy roads, which can make the GT feel underpowered – especially on an incline.

At this price you might also consider a funkier Fiat 500, a more spacious Suzuki Swift, or even a Renault Clio, but the advantage of the Picanto is a seven year warranty and a deliberately athletic aesthetic. That and knowing you’ve bought from the top of the range and still have plenty of change from $20K.