What is the Ford Puma?

Here’s a home truth… if it weren’t for the Ranger, Ford Australia really would be in a world of trouble right now.

If not for its ever-widening range of Thai-made commercial pick-ups, in fact, it would very likely join Holden in the ranks of benched car companies in Australia. Sobering, but true.

A quick glance at its current roster provides plenty of supporting evidence. Just over 700 Ford-badged SUVs sold in September 2020, in a market that snapped up more than 32,000 of them.

MOREAll the details of the Ford Puma

Even Holden sold more Acadias in September than Ford sold Enduras, for example.

In short, Ford needs another hitmaker on the books - and it needs it quickly.

So, then, there’s a lot riding on the car we’re testing today, the Puma.

Based on the latest Fiesta, the Puma is a five-door, five-seat light SUV that breaks few conventions. An entry-level car simply named Puma starts at $31,990 driveaway, before stepping up to the ST-Line as tested here for $33,990 driveaway.

Capping off the three-strong range is the ST-Line V that costs $36,990 driveaway.

Ford says that the driveaway pricing would be offered until the end of 2020.

The Puma will really need to set itself apart from the Mazda CX-3 and the Nissan Juke in a space where price isn’t necessarily the last word.

In such a fiercely contested space, there is absolutely no room for error. 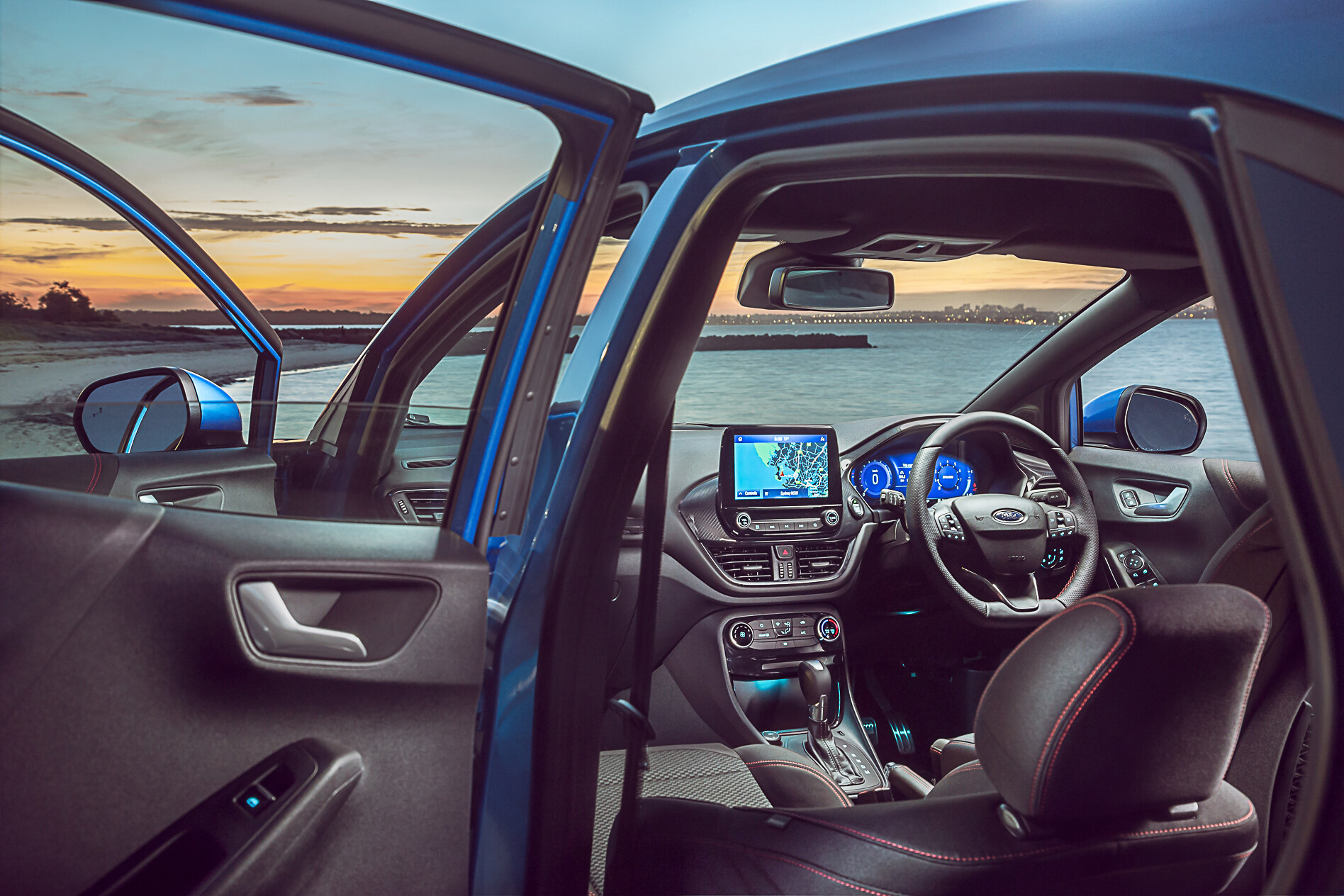 Living with the Ford Puma

A flat-bottomed steering wheel – adjustable for rake and reach - is generously proportioned and well-equipped with multimedia and adaptive cruise control buttons, while a 12.3-inch digital dash comes standard on this mid-grade ST Line, and is easy to access.

A big tick, too, for having the indicator stalk on the right side of the steering column.

There are, however, some spec oddities. For example, it offers a pushbutton start system but doesn’t allow for keyless entry. The lack of climate control air conditioning is also noticeable by its absence, but an abundance of charging options for devices - including an inductive charging pad, a 12 V socket, and two USB points - goes some way towards making up for this.

Hard-wired Apple CarPlay and Android Auto connectivity form part of the SYNC3 multimedia system that runs through an 8.0-inch touchscreen that sits proud of the dash. 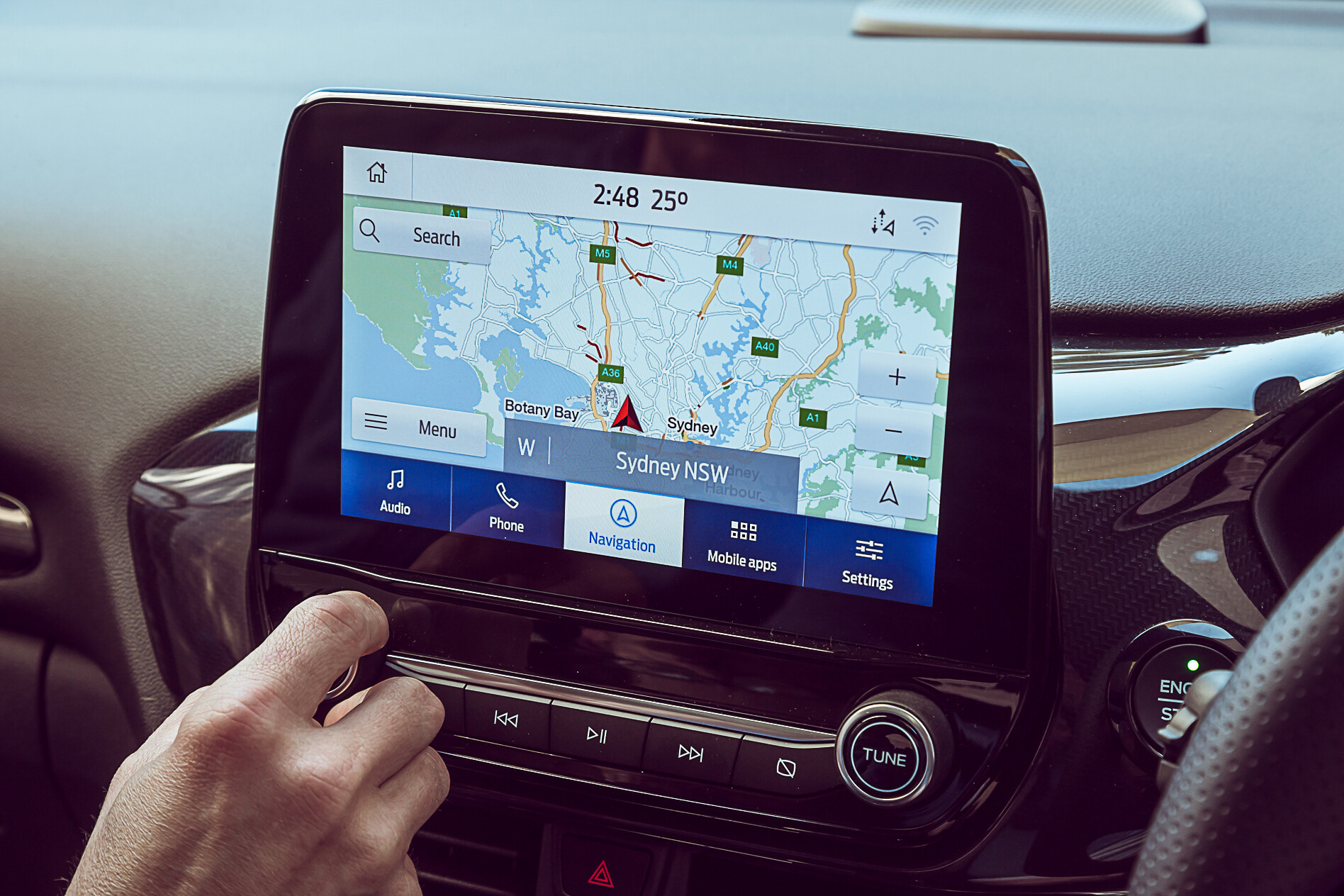 One of those variables will include design and appearance - and it’s safe to say that the Puma will polarise opinion.

It’s actually a rare case where the photos do the car a favour; in the metal, the front guards appear to be much more arched and pronounced, the 17-inch wheels fade away into the wheel wells and there’s an inherent imbalance between width and height that cause people to wonder if it’s actually nothing more than a regular hatchback.

The glasshouse is reasonably generous, with good visibility from the driver’s seat, even in the dreaded rear three-quarter view, thanks to a porthole window in the C-pillar.

There is plenty of headroom up front for even the tallest of driver and passenger, thanks to a deeply sculpted headlining, while contact points like the armrests, centre console bin lid and tops of the door cards are adequately padded.

That front room, though, comes at the expense of rear space, though it’s better than the CX-3 from that standpoint. Its well-thought-out cargo area, too, earns it genuine brownie points, with a deep 80-litre removable wet tub under the floor complete with its own drain hole.

At 410 litres, it’s 60 litres to the better over the CX-3, let down a little by a tailgate handle that stretches the reach of our more diminutive testers when it comes to closing it.

However, from here things go downhill. For example, there is no left-foot rest, and the driver’s calf ends up leaning uncomfortably against the transmission tunnel.

The seat itself feels a size too small for the average Aussie male, too. It feels too narrow across the thighs, too short in the squab and too thin across the backrest.

It also sits about 50mm too high at the front to be comfortable under-thigh, which only exacerbates the missing footrest.

Even the angle of the throttle pedal puts the driver's ankle in an unnatural position.

The driving experience is also a bit of a mixed bag. The 1.0-litre three-cylinder turbocharged engine – good for a hale 92kW and a hearty 170Nm - and seven-speed dual-clutch gearbox do actually work very well together, providing more than adequate urge around town and enough nip on intra-city freeways.

There’s a typical three-cylinder gruffness about the engine’s note, which may offend some but I reckon gives the Puma more of a presence. A growl, if you will…

Throttle response is excellent, too, with the merest brush providing adequate get-up and go. The same can’t be said for the brake pedal, though, which feels very wooden and hard to modulate at low speeds.

The Puma’s steering feel has also been plucked from that same pile of lumber. There’s weight underhand but there’s little correlation to where the front wheels are located.

Its primary ride is just on the right side of firm on smooth surfaces and offers decent roll control, but it quickly comes undone.

Square-edged bumps crash through the chassis like a touring car smashing a kerb, and it happens at both ends of the car, creating a jostly, bouncy ride over typically broken urban roads.

Such was the jarring ride that we dropped the tyre pressures to the lowest side of placard pressure that we could, but the improvement was marginal at best.

Even though the Puma rides about 40mm higher than its donor Fiesta, it simply doesn’t feel like there’s any more suspension travel available.

The 2020 Ford Puma has a five-star ANCAP safety rating, based on Euro NCAP data scored in December 2019.

While it misses out on the most up-to-date safety features like centre airbags, the Puma's pedestrian and cyclist-detecting AEB and its lane-keep assist are highly rated.

Six airbags, a rear-view camera and speed-sign detection are standard across the Puma range.

How much does it cost to run the Ford Puma?

As one would reasonably expect, fuel economy is pretty good aboard the three-cylinder Puma, with our best score hovering around 6.4L per 100km against a combined fuel economy claim of 5.3L/100km, edging towards 6.8 around town.

With its 42-litre fuel tank, it should cost about $50-60 to fill, and it has a theoretical range of about 790km between refills.

There's a five-year/unlimited-kilometre warranty on the Puma, with service intervals suggested at 12-monthly or 15,000km intervals.

Its first four services are capped at $299 each through Ford's Service Benefits plan.

The Puma has the job ahead of it, then, to hunt down and capture the likes of the CX-3s and Jukes of the world.

It’s a sound proposition with decent interior space and appointments and a lovely driveline, but it's let down by a less-than resolved chassis tune and pricing that may favour its competitors in the argy-bargy of showroom showdowns.