While Audi’s athletic RS machines and futuristic electrified models garner a majority of the limelight for the German brand, it’s the less glamorous vehicles that actually keep the cash register ringing and the four rings welded together.

The Q3 little SUV might not be particularly sexy in any traditional sense of the word but it was Australia’s favourite Audi last year, while its bigger sibling – the Q5 – is the company’s most successful SUV to date.

It’s therefore in Audi’s best interest to keep its popular mid-sized SUV as attractive as possible to the discerning local audience, especially given the compelling options from other manufacturers in the premium market.

Most recently, Mercedes joined the battle with its first-generation GLC, while Volvo proved what it’s capable of with a Wheels Car of the Year win in 2018.

That’s why, four years after the gen-two model arrived in Australia, the Q5 range has been given a light update.

There’s no sizzling SQ5 in either petrol or diesel variants yet, nor a V6 in either fuel type for the rest of the range (although a V6 50 TDI will arrive later in 2021), with the updated range remaining exclusively four-cylinder-powered for now.

Both versions can be had in sportier Sport spec but for a limited time, the 2.0-litre four-pot pair are on offer as a more exclusive Launch Edition.

Throw the special extras at the base diesel and its price jumps to $78,300. That’s serious cash for a mid-sized SUV so why would you drop the significant extra investment over the entry level 40 TDI, which is already $3000 more expensive than the 2017 version in standard form?

For your extra $9400 over the most affordable diesel, Audi will add a package of extras that enhances the Q5 styling for a more premium look.

On the outside there’s the largest 20-inch (unique) Falx-design wheels, a black style pack that turns a number of trims gloss black, metallic paint (Matador Red in our case), and door mirrors capped in real carbon-fibre.

Depending on the driving mode and road conditions, the cutting edge lighting can alter its pattern and will even illuminate its most notable setting if a following vehicle is within two metres of the Q5’s tail.

Its maker claims the application is the first of its kind in production vehicles although BMW would probably argue that, having already introduced organic LED lighting for the rear light clusters in its M4 GTS and CS.

The special extras are in addition to the 2021 facelift, which is headlined by the all-new nose and a more imposing Singleframe grille with resculpted brake vents and foglights.

It’s the same story at the back where the plastic-work has been redesigned leaving the metalwork untouched.

On the inside, the subtle upgrades extend to contrasting stitching on the leather seats, illuminated treadplates, darker privacy glass, and selectable colour ambient lighting.

You’ll also have the cozy feeling that only 400 other Australians will have the option of owning a Launch Edition Q5.

The effect is a Q5 more prestige in its appearance if lacking much tangible value for the nearly $10,000 added to the bottom line. Value however, is in the wallet of the beholder.

More notable though are the improvements offered for all Q5 variants as part of the 2021 update including the arrival of mild hybrid technology for the four-cylinder powertrains.

Wait for the 50 TDI and you will have access to more beefy 48-volt muscle but the existing range uses a 12-volt system to improve efficiency.

The starter/generator unit now replaces the more conventional starter motor and the noise associated with it, the new Q5 firing up from idle stop with an eerie smoothness and silence. The same system can add a small amount of torque into the proceedings for improved performance and economy.

Officially, Audi says the 40 TDI will asks for just 5.4 litres of diesel to travel 100km on the combined cycle, which is the same as the previous pre-hybrid engine although the new 2.0-litre has more power with 150kW versus 140kW. Peak torque of 400Nm is unchanged. We feel the benefit will be most felt in stop-start traffic.

However, while fuel use remains the same, the update brings a larger 70-litre tank (previously an option in some other global markets) and that means, if you can achieve Audi’s claimed economy figure, the 40 TDI has a range in excess of 1200km. Impressive.

As before, power is sent to all four wheels via a seven-speed dual-clutch automatic transmission and Audi’s proprietary quattro all-wheel drive system.

The result is a power delivery smoother than you might expect from a four-pot diesel, paired with the urgency of a dual-clutch gearbox when you need it.

Acceleration can be a little delayed off the mark with a combination of transmission and turbo lag as the powertrain fights sticky all-paw traction, but in-gear performance and acceleration is gutsy and eager. Perhaps it’s the intervention of a little electric torque or simply sophisticated diesel tech, but throttle response is fast and precise once up and rolling.

Pin the accelerator from standstill and the Q5 40 TDI will get to 100km/h in 7.6 seconds, says Audi.

The power increase of 10kW has not altered the manner in which the refined diesel delivers power nor has it impacted the excellent noise, vibration and harshness levels to any perceptible degree.

Audi’s diesel future is slowly being overshadowed by electric – as are all its combustion powertrains for that matter, but the solid 2.0-litre is still making a compelling argument for itself and the advantages of diesel in general.

No changes have been made to the Q5’s chassis with the update and that’s good news. The model has always offered excellent ride quality that is on the firm side but aces a good balance of comfort for occupants and involvement for the driver.

The only downside is the excessively light steering which struggles to communicate much of the action from the front wheels.

In foul weather there is a confidence to be found in the quattro all-wheel drive and a satisfying resistance to body roll, but it would be even more enjoyable if the beautifully ergonomic steering wheel was a little more chatty.

There’s little change to the Virtual Cockpit digital instrument cluster even though more rivals are introducing their own interpretations of the feature that was largely championed by Audi.

For the 2021 update, the display has been refreshed with three views, which effectively translates to six when you hit the ‘view’ button to switch between dominating gauges or a more prominent information screen.

Some owners would perhaps prefer the fold-away option Audi offered in some earlier models for a beautifully clean dash layout when the screen is not required, but with standard smartphone mirroring it’s hard to imagine a time when the screen won’t be in use. It’ll also allow two Bluetooth connections simultaneously.

If you don’t get along with touchscreens in cars then you might like the Q5’s new ‘Hey Audi’ voice activation function that’s similar to ‘Hey Mercedes’ MBUX technology. While our experience with the Benz interpretation is largely positive, the Audi equivalent wasn’t quite so successful – perhaps it was just our reviewer’s accent.

The Q5’s cabin is, as always, clean, well laid out, and features the sharp design you might expect from any model in the four-ring family.

The driver is treated to a driving position that’s hard to beat, although the seat support feels better suited to the, ahem, wider driver when you hit the twisty stuff.

Hop back to the second row and there’s enough room to comfortably accommodate two adults plus a smaller human; even with the standard panoramic glass roof, there’s just enough headroom for a 184cm passenger.

At the back there’s a 520-litre boot, which expands to 1520 litres if the rear seats are folded. Helpfully, they are split 40-20-40 and slide-adjustable to allow the right balance of load space and passenger accommodation.

As always, perhaps the only treacherous element of Q5 shopping is the tempting but pricey options list.

There are a couple of packages that bundle frequently ticked items including the Comfort pack and Technik pack but roam far from the better value packs and you had better have deep pockets.

Our test car was outfitted with a $390 heated and cooled drink holder between the front seats, a selection of gloss black interior trims that amounted to nearly $1000 and the trick OLED rear lights added another $2500 to the bottom line.

Want a diesel Launch Edition just like ours and it’ll cost you $87,160 before on-road costs. Ouch.

In base 40 TDI grade, it can’t quite match the driving enjoyment of the identically priced BMW X3, Volvo’s XC60 also represents a compelling alternative, and the options selection is still merciless, but the Audi continues to battle hard in the fickle market thanks to a blend of subtle style, sophisticated drivetrain tech and a badge with which Australians are fondly familiar. 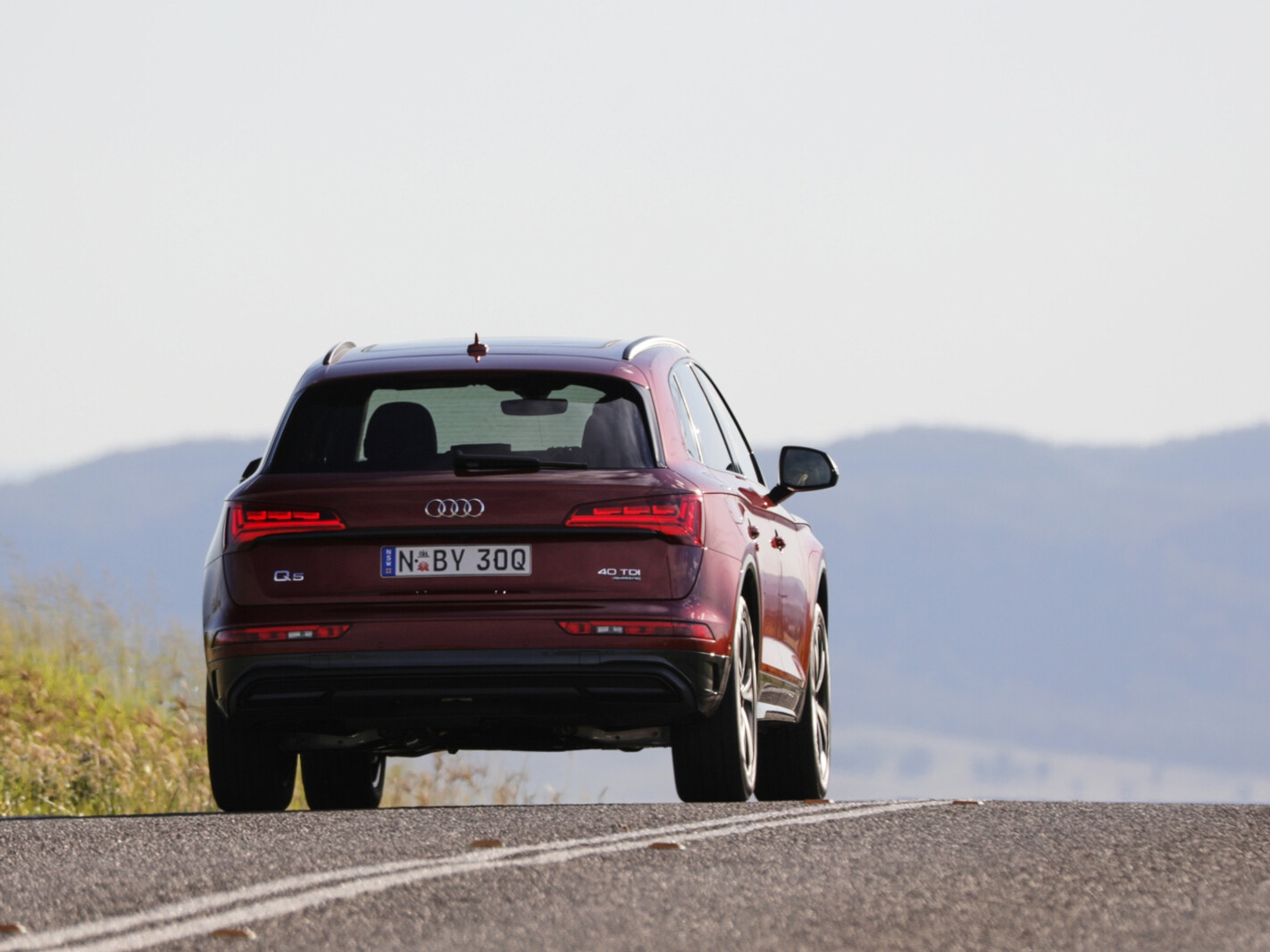