Toyota’s first new HiLux in 10 years is big news and is set to transport Aussie tradies and 4x4ers for another decade.

Toyota’s all-new eighth-generation Hilux has been more than six years and one million kilometres in the making. Toyota claims it’s a clean-sheet design that’s tougher yet more efficient, refined and better equipped than the outgoing Hilux that was launched in 2005. As well as the choice of two completely new, more efficient diesel powertrains, the new Hilux boasts an all-new chassis and three all-new cabins.

Fortunately for Toyota, the product-cycle timing in the wider market has also allowed the new Hilux to be benchmarked against the best of its competitors, namely the Volkswagen Amarok and the Ford Ranger, which has no doubt worked to its betterment.

More than 650,000km of the Hilux’s development was undertaken right here in Australia, resulting in locally developed and tested suspension and an underbody protection package for vehicles sold in tough markets like Australia, South Africa, the Middle East, Russia and South America.

The new Hilux comes in 31 variants, 19 are 4x4 models, more than half of which are dual cabs that come in four equipment levels: Workmate, SR, SR5 and SR5+. 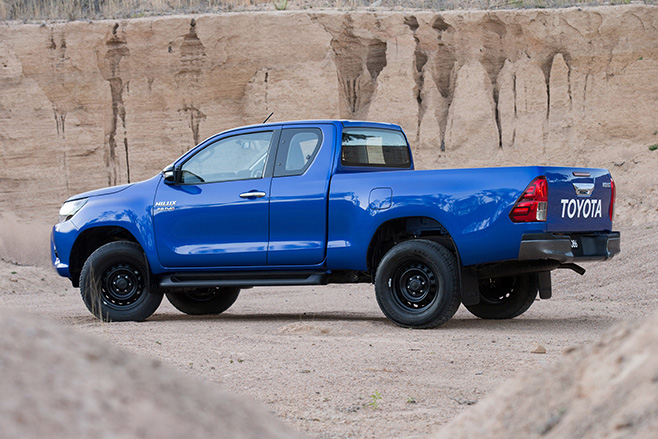 The Hilux 4x4 comes with three engines, one of which comes in two states of tune. The smaller of two all-new diesel engines is the 110kW/400Nm 2.4-litre 2GD-FTV, which is offered with both the new six-speed manual and the new six-speed automatic, but only in Workmate models.

The largely unloved 175kW/376Nm 4.0-litre petrol V6 is carried over from the previous-generation Hilux, but is only available as a dual-cab automatic. 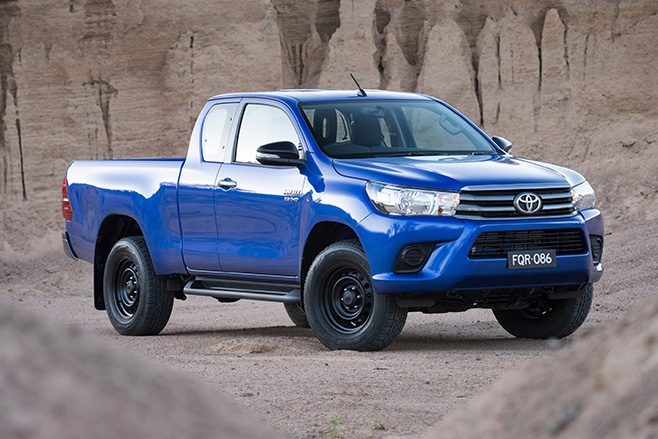 The new Hilux boasts a ladder frame with 20 per cent more torsional stiffness than the outgoing model thanks to 30mm-wider side rails and cross-members. The bodies are stiffer, too, thanks to higher-grade steel and 45 per cent more spot welds, and they’re dropped onto the chassis with more chassis-mounting points.

At the rear the leaf springs are 100mm longer than before and are mounted 50mm farther apart, while bigger-diameter dampers are now mounted forward of the axle. This improves rear-wheel travel by 520mm; a 67mm increase over the old model. At the front the double-wishbone suspension features revised springing, new swaybars and larger-diameter dampers. The new 4x4 Hilux also has more extensive and robust underbody protection. 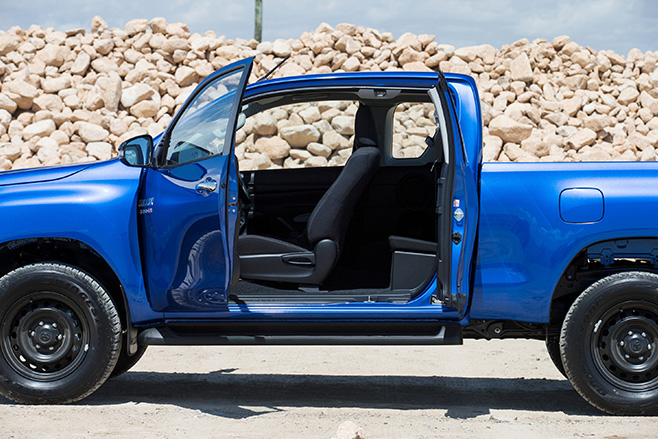 The Hilux’s new cabin isn’t notably larger than that of the outgoing model; although, there is slightly more shoulder and headroom up front and, importantly for driver comfort, all 4x4 models (even single cabs) have tilt and reach steering-wheel adjustments. SR and SR5 models also benefit from seat-height adjustment while the SR5+ gains electric seat adjust.

Rear-seat passengers have a bit more legroom, while the rear seat base in SR and SR5 dual-cabs now splits 60/40 and has a stowable armrest.

The cabin certainly feels more passenger car than commercial vehicle, thanks in part to a tablet-style multi-function touchscreen that dominates the dashboard on all models, including the Workmate.

As expected, the new Hilux has achieved the maximum five-star ANCAP safety rating. 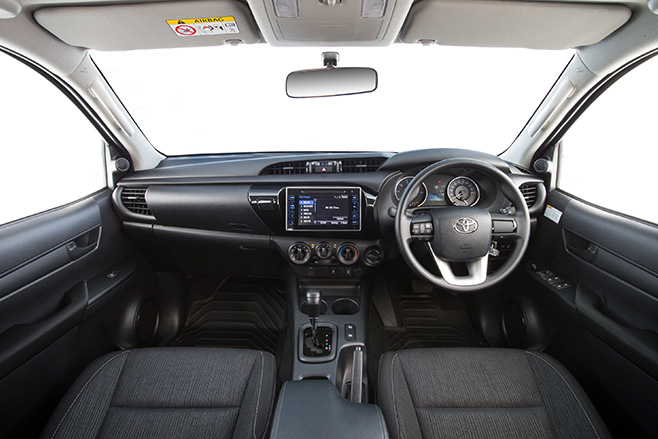 Both diesels sound far more refined and quiet right from start-up. Once underway they have far less diesel rattle and diesel knock than the old 3.0-litre engine. Despite just a 4kW increase in maximum power over the outgoing 3.0-litre, the 2.8 offers far better response and general flexibility, thanks to an extra 90Nm with the auto ’box and 77Nm with the manual.

The 2.8-litre actually feels more willing with the manual gearbox, despite having 30Nm less than the auto ’box.

In SR5 spec the 2.8’s manual gains a mode which softens the shifts by matching the engine revs from one gear to the next and makes the engine all but stall-proof on take off.

In many ways the smaller 2.4-litre diesel is, however, the real surprise as it gives little (or even nothing) away to its bigger brother in most driving situations, even if it ultimately can’t match the pedal-to-the-metal punch of the 2.8.

The 2.4 claims 16kW less than the outgoing 3.0-litre diesel, but has 40Nm more torque in auto form and 57Nm more as a manual; a good indicator of just how efficient these new-generation diesels are. 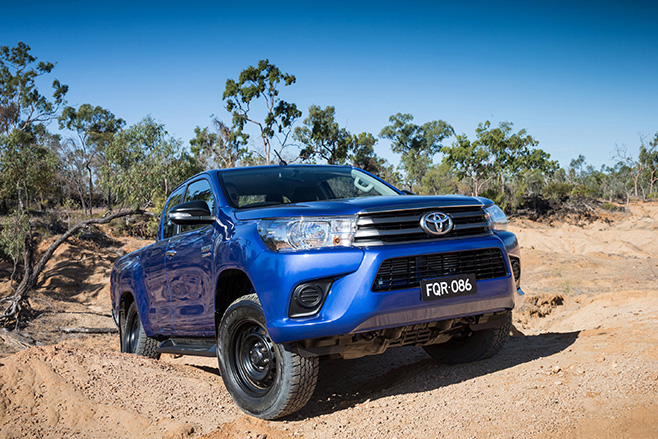 Both diesels mate nicely to the new six-speed auto, which has two overdrive ratios and is a more refined gearbox than the five-speed automatic introduced less than two years ago with the previous-generation Hilux diesel.

The new Hilux also rides and handles better. Even though it still feels like a ute thanks to its load-carrying rear suspension, the overall ride compliance and front-to-rear suspension match is much improved, as is steering feel.

As good as the new Hilux is on-road, the biggest improvements are felt off-road, thanks to the longer rear wheel travel, extra ground clearance and, more significantly, the new A-TRC electronic traction control.

The new A-TRC is more aggressive in limiting wheel spin than the traction control of the previous-generation Hilux, so much so that the rear diff lock, which is now standard on the SR and SR5 models, is almost redundant. When the rear locker is engaged the A-TRC is disabled on the front axle; a move that’s in the interest of driveline durability, according to Toyota.

A-TRC can also be completely switched off in situations (like mud and sand) where momentum is more important than traction. 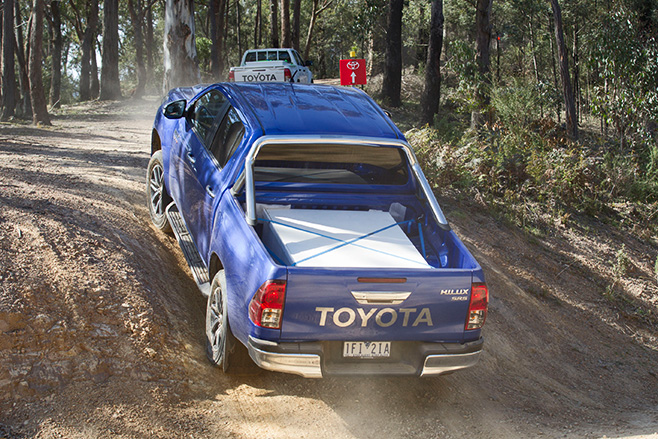 Over the Workmate, the SR adds sidesteps, carpets, an up-spec audio, a larger touchscreen, a cooler/heater box, driver’s seat-height adjustment and a rear diff lock.

SR5 Pick-Ups also have smooth-sided tubs rather than tubs with external tie downs as per the Workmate and SR models. Over and above the SR, the SR5+ then adds leather and electric driver’s seat adjustment.

Given that the outgoing Hilux has been the best-selling vehicle in its class, it’s hard to see how this new Hilux will do anything but build on that success. It looks like the ute might even outsell the best-selling traditional passenger cars. And while some buyers may be concerned about the move to smaller engines, the new diesels, even the 2.4, manage to produce more torque than the old 3.0-litre, without having to rev any harder or rely on higher compression ratios. You can put that down to improved combustion efficiency.

The new Hilux also manages to be more civilised on the road and more capable off-road, and it can tow and carry more, too. We can’t wait to line it up against its competitors.

This article was originally published in 4x4 Australia December 2015.

Click here to read the full range review on the Toyota Hilux. 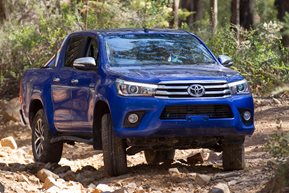