The Hilux 4x4 Workmate comes with a 2.4-litre diesel and not the 2.8-litre of the up-spec models. But is it up to hard yakka?

Opt for a base-spec Workmate in the new HiLux 4x4 range and you get a 2.4-litre diesel and not the 2.8-litre diesel that comes in SR and SR5 models. This is the first time that there’s been two diesel engines on offer in a HiLux, not that you have any choice with the Workmate. It’s 2.4 or nothing.

Workmate 4x4s come in single, extra and double cabs, but only the double-cab comes with a ute tub, as the others are only offered as cab-chassis models. The 2.4 is available with either a six-speed manual or automatic and here we are driving the auto. 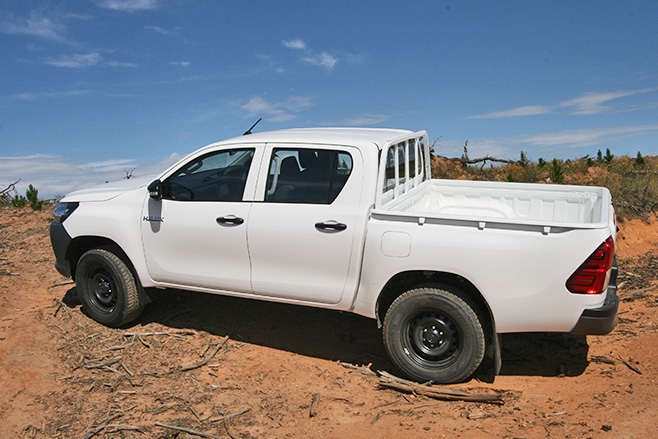 Despite its steel rims, the Workmate comes with 7 airbags, stability, traction and hill-start control, 5-Star ANCAP, DRLs and auto-off lights.

The 2.4 is a short-stroke version of the 2.8. In fact, in shortening the stroke from the 2.8’s 103.6mm to the 2.4’s 90mm, the engine has gone from undersquare to oversquare, given it has a 92mm bore. Retaining the same bore also means the cylinder-head architecture can be similar, if not the same, and a commonality of parts.

The 2.4 also shares the 2.8’s design philosophy, which includes a low compression ratio of 15.6:1, a relatively small, low-inertia turbo, but much improved thermal efficiency compared to the 3.0-litre diesel in the previous-generation Toyota HiLux. 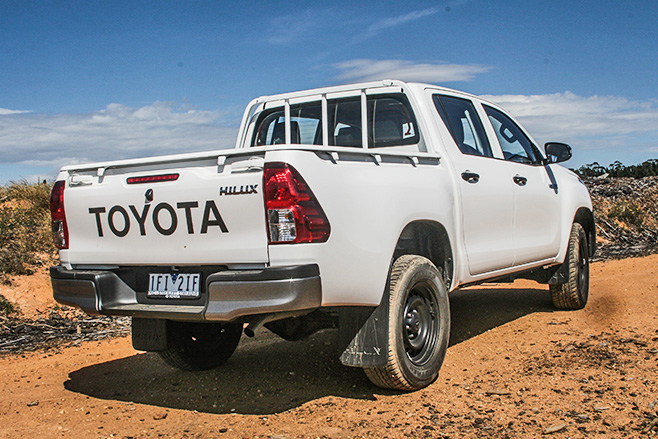 On the road this engine is noticeably smooth and quiet and gives away little or nothing to the 2.8 in general give-and-take driving, thanks in part to the slightly shorter final drive; 4.1:1 compared with the 2.8’s 3.090:1 (with the automatic gearbox). And given that both fifth and sixth are overdrive gears in the six-speed auto, and sixth is particularly tall, the shorter final-drive gearing never makes the engine feel busy at highway speeds. 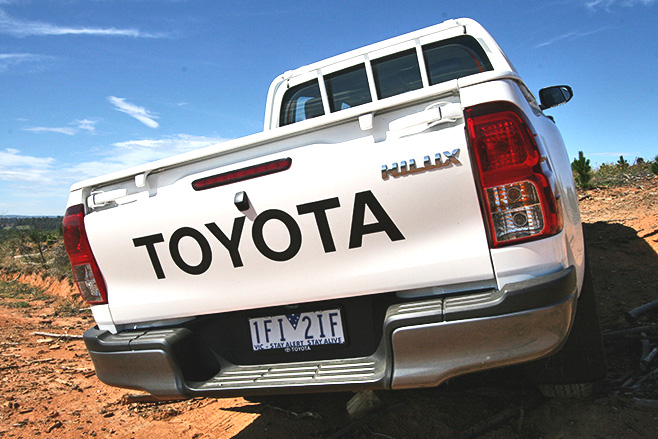 Equally good on the sand and the bush tracks.

On the downside the 2.4 lacks the overtaking response of the 2.8, which isn’t anything special anyway, and it obviously won’t have the same grunt for hauling or towing heavy loads.

As with other 4x4 models in the new HiLux range, the ride is jittery at low speeds when unladen but smooths out at speed, while its general road manners are much improved on the last-generation HiLux.

This new HiLux is also excellent off-road thanks to improved ground clearance, better approach and departure angles, massive wheel travel at the rear (more than half a metre) and a highly effective traction control system. 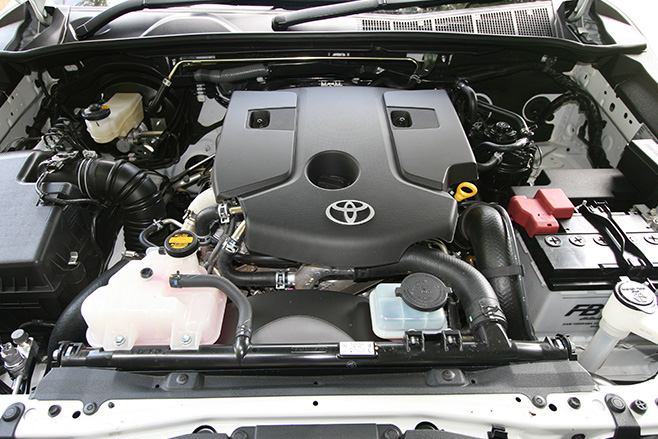 The Workmate doesn’t come with the rear diff lock of the SR and Toyota HiLux SR5 models, but this doesn’t really hinder its off road ability, as engaging the rear locker cancels the ETC on both axles, not just the rear, which largely negates its benefit.

The new HiLux’s cabin isn’t any bigger than the out-going model, but it is more passenger-car-like and comfortable with tilt-and-reach steering wheel adjustment. The Workmate even gets the tablet-style touchscreen of the up-spec models, somewhat of a surprise in this base-spec level. While this works okay in itself, the touchscreen audio-system volume control is  a very poor substitute for an old-fashion volume knob, even if there is also volume adjustment on the steering wheel. 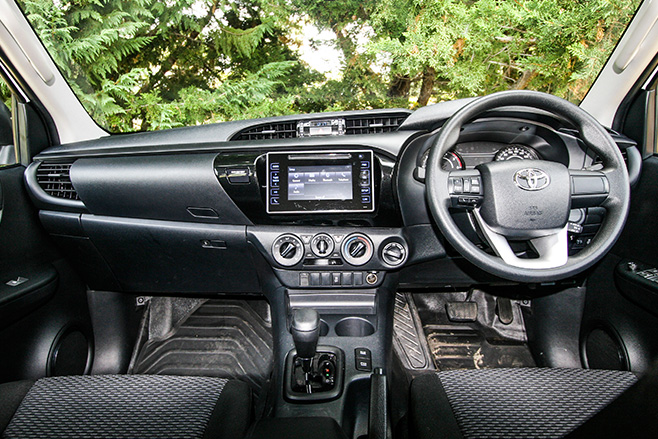 New interior is more car-like and even includes the tablet-sized touchscreen for secondary controls.

The Workmate also misses out on some equipment of the up-spec models; most noticeably there are no side steps to help entry into the high-riding cabin and no height adjustment for the driver’s seat, neither of which will please shorter drivers. On the other hand, the basic fabric seat trim and vinyl floor coverings both offer day-to-day functionality.

All in all the 2.4 is somewhat of a surprise packet as it performs well above what you’d expect of a 2.4-litre engine, even if it’s no star in terms of pedal-to-the-metal grunt. You just need to be more patient…

Click here to read the full review on the Toyota HiLux range.

This article was originally published in 4x4 Australia March 2016. 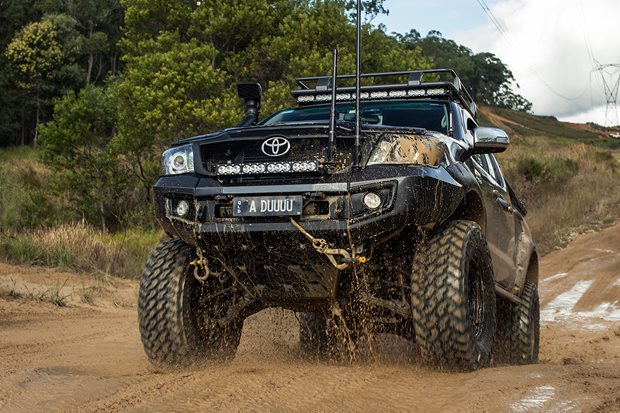 Lifted Hilux SR5 pumps out 200kW at the wheels

This Hilux could’ve ended up on the farm, but it morphed into this hellishly impressive weekend warrior.