BY their nature, performance cars have an enormous hill to climb at Car of the Year. Typically compromised on space and comfort at the expense of going fast, they nail some COTY criteria but fall spectacularly flat in others.

Except the BMW M2 arrives with very few of those go-fast compromises.

Utilising much of the body of the regular 2 Series but with 80mm added to its girth, the M2 benefits from a compact yet spacious cabin that can transport four people at a pinch. 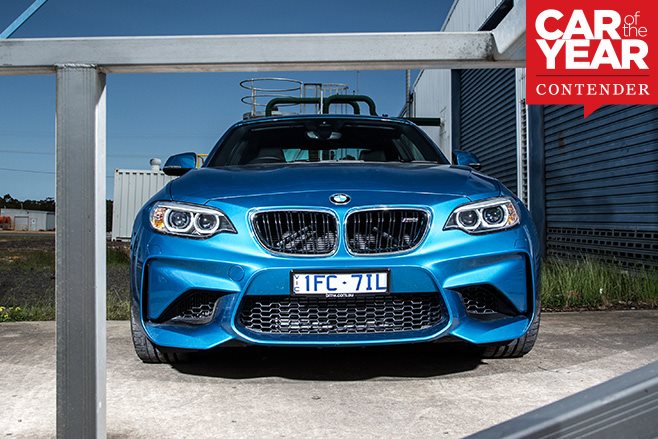 That it also manages to ride with maturity and some semblance of comfort earnt it early COTY praise. It sits on low-profile 19-inch rubber, yet is never harsh, proving compliance is not mutually exclusive to handling ability.

Judges also loved the simplicity of what is BMW’s most affordable M model. Whereas M cars with larger numbers require button pressing and adjustments to alter throttle mapping and gearshift points, the M2 is more point-and-shoot from a choice of three driving modes.

The M2 also has some worthy additions to the BMW family, such as autonomous emergency braking. BMW has been resisting on the grounds that drivers should be in control of driver’s cars, yet it’s finally succumbed to the inevitable with this iteration. The AEB worked well when aimed at a regular passenger car, but didn’t always pick the back of our ute target. 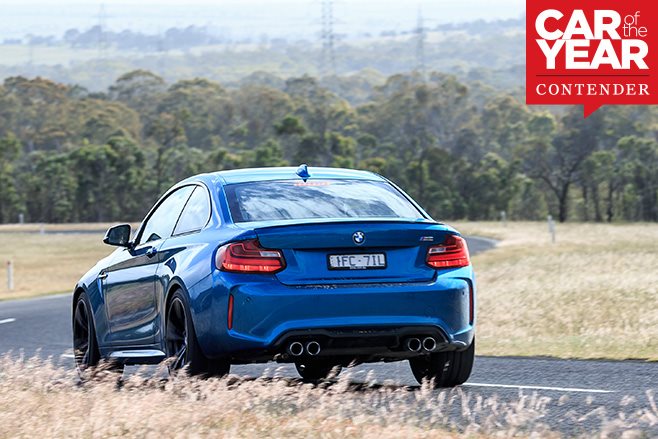 But it’s value that made the M2 a favourite.

In the Pure form of our COTY tester it’s a $90K proposition – and one that brings near-Porsche 911 acceleration to the bitumen.

Indeed it’s the engine that cements the M2 as such a delight. Incredible tractability and low-rev torque flourishes to a near-7000rpm concerto of big kilowatts. It’s an engine rarely lacking, yet one that happily obeys more mundane commands in everyday driving.

It’s teamed with one of the slickest DIY-shifters in the business. That six-speed manual is arguably the better transmission with a wonderfully crisp and accurate shift action, even if it adds 0.2 seconds to the 0-100km/h time achieved by the seven-speed DCT. 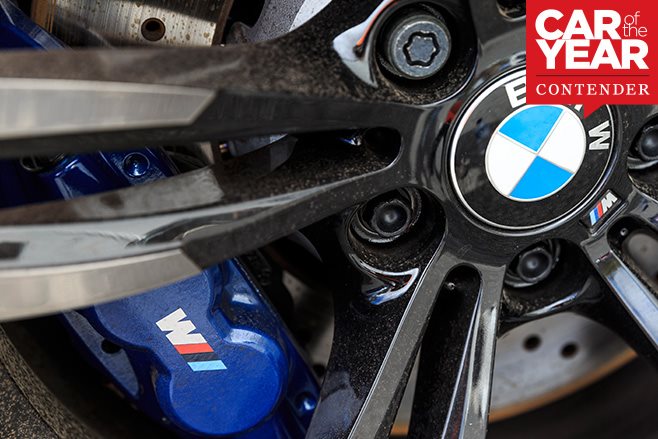 Corners are also an M2 forte; at least in the dry. Sublime balance and oodles of grip ensure it makes the most of that prodigious power. But, while it’s not as spikey as the 1M, or even the BMW M4, it’s still a car that demands respect on damp roads. Too eager on the throttle and you’ll feel the stability control nipping and biting as it trims the line and tries to keep you pointing in the right direction. By consequence, you drive the M2 with a bit in reserve.

Its brakes, too, are a bit underwhelming, giving the occasional metallic grind.

In the end, though, while the M2 did score two votes from the judges, it’s more a welcome return to form for M than a genuine boundary breaker, which is why it failed to progress beyond round one. Yet that shouldn’t detract from the M2’s apeal. This is the kind of car BMW’s M Division should be making.