This year’s Monterey Car Week managed to stir up all seven deadly sins with the sheets coming off an incredible line up of concept and launch vehicles that became instant legends.

WHILE it’s difficult to single any cars out from the endless dream fodder on display at Pebble Beach at the weekend, here’s our pick of the fresh metal and carbon fibre on show.

This is the topless version of the Centenario Coupe that was revealed earlier this year to celebrate what would have been the 100th birthday of Ferruccio Lamborghini – and it really is the stuff of a hundred birthday dreams.

Its carbon fibre monocoque is built on the underpinnings of the Lamborghini Aventador, and surrounds a 6.5-litre naturally aspirated V-12 that produces 566kW (51kW more than the Aventador Roadster).

The most powerful engine to be built by the iconic Italian brand, it takes the Centenario Roadster from 0-100km/h in 2.9 seconds (just 0.1secs slower than the coupe). Lamborghini reckons it can reach 350km/h, aided by an aerodynamics package that includes an active rear wing, which can extend up to 150mm and rotate up to 15 degrees.

The good news is this isn’t just a concept – it’s going into limited production and selling for around A$3 million. The bad news is they’re only making 20, which have already been sold. It’s available in an awesome new colour, Argento Centenario, but customers can choose from any Lamborghini hue. 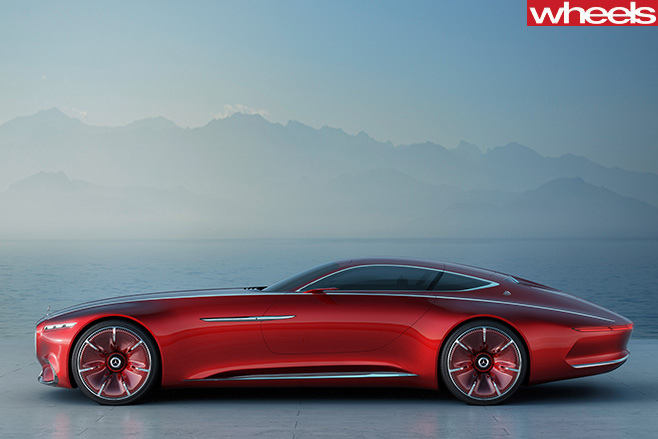 Mercedes teased us with a sneak-peak-image of this incredible luxury coupe and its full reveal didn’t disappoint. Full pictures were leaked the day before its official launch but we still had to wait to see what was under the 2-metre long bonnet. In the end there was nothing except for luggage space because as suspected the Maybach Vision 6 is an entirely electric-powered vehicle. Motors at each wheel combine to produce 550kW, which Mercedes claims can take this 6-metre long and 2.1-metre wide racing-speed-boat-on-wheels from 0-100km/h in under 4.0secs. Top speed is an electronically governed 250km/h.

The motors are fed by an 80kWh underfloor battery pack enabling a 320km-plus driving range and a quick charge feature allows an extra 100km of range to be zapped in after just five minutes. The battery can either be charged via a cable connection or wirelessly, via an electromagnetic field.

Gullwing doors open to what looks like futuristic boudoir with two inbuilt seats and an ‘augmented reality’ windscreen with crystal-look displays and gesture controls replacing buttons. Under the padded leather, sensors monitor the occupants’ vital functions and set comfort features, such as climate control and a massage function, accordingly.

Sadly it’s just a concept, but a positive reaction at Pebble Beach could hopefully lead to the Maybach badge being applied to a bespoke production coupe. 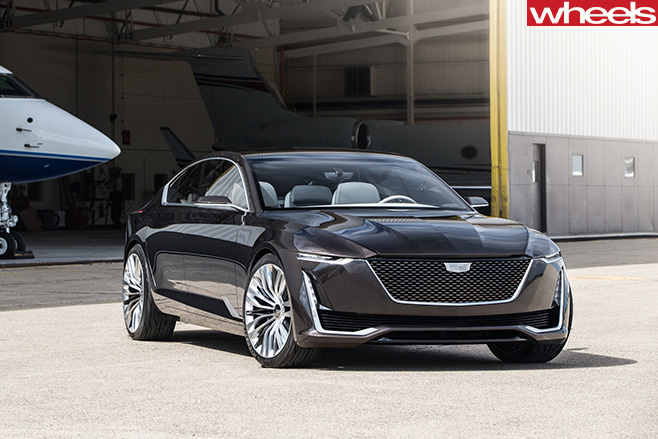 While some may have been disappointed that Cadillac’s eagerly awaited reveal at Pebble Beach wasn’t exactly muscle-bound, the Escala four-door-coupe concept is interesting to us as it could signal a shape of things to come in post-Commodore Australia. It could also show Cadillac’s future direction with former Holden design chief Michael Simcoe about to take on the role of GM director of design.

As concept cars go it’s pretty tame and rather than being the product of designers with time on their hands, it represents Cadillac’s “return to the pinnacle of premium”.

It looks a little like a four-door Camaro, and purists will be happy to know it’s powered by a new 4.2-litre twin-turbo V8 engine that’s a prototype for a powerplant that will make its way into future GM models.

Inside is a central control module that works via voice or gesture commands with displays shown on three curved OLED screens that merge the traditional driving gauges and “centre stack” into one integrated unit. 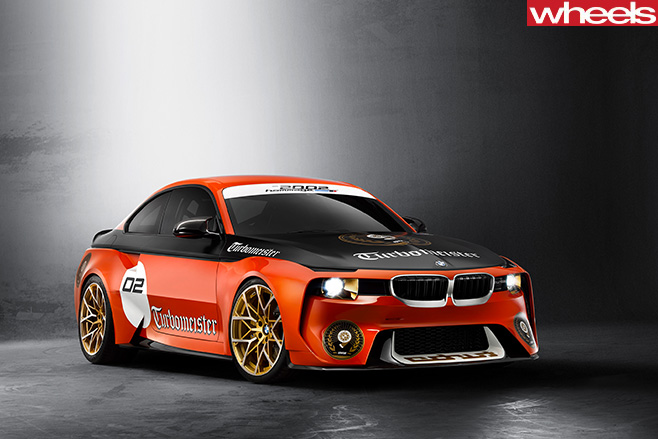 Retro concepts still have the ability to excite, and that was the case with BMW’s tribute to the birth of the turbocharged car and its subsequent racing success with the type.

The 2002 Homage is an M2 with a body resembling the 1973 BMW 2002 turbo, which became the first series-produced vehicle in Europe to feature turbo technology. This tribute, complete with bulging wheel arches and shark nose, first appeared Concorso d’Eleganza Villa d’Este in May in civilian M colours, but arrived at Pebble Beach sporting an orange livery based on the Jägermeister Racing Team, that was prominent throughout the 1970s.

Where’s not sure if it’s political correctness or just a clever pun, the liquor brand isn’t actually mentioned on the car, with Jägermeister replaced by “Turbomeister” on the side. 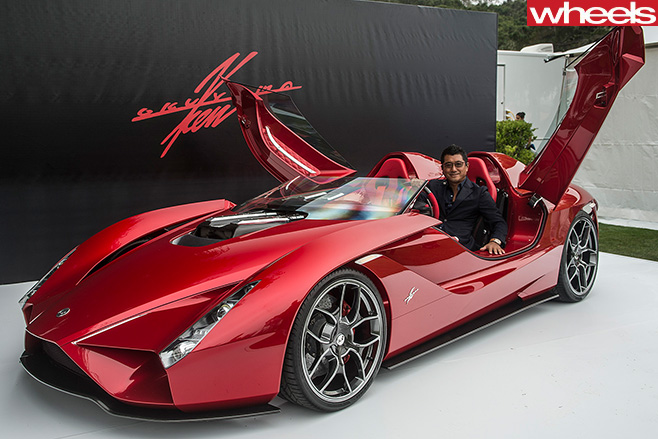 The Kode57 sits atop an aluminium chassis believed to be taken from a Ferrari 599 GTB and is powered by a front-mounted 6-litre, V-12 engine that produces 447kW.

The carbon-fibre body panels are designed with cut outs to enable clean airflow and while there are fenders over the front wheels you can see them, open-wheeler style, through apertures running parallel with the bonnet. Reverse opening doors top off the striking design.

The “57” in the name pays homage to the year 1957, but this is certainly no retro design. Okuyama says he chose the name because that was a great year for iconic cars.

Orders are being taken and while there’s no confirmation on numbers and prices, there are reports that boxer Floyd Mayweather has dropped around A$3.3 million for the first one to come off the production line. 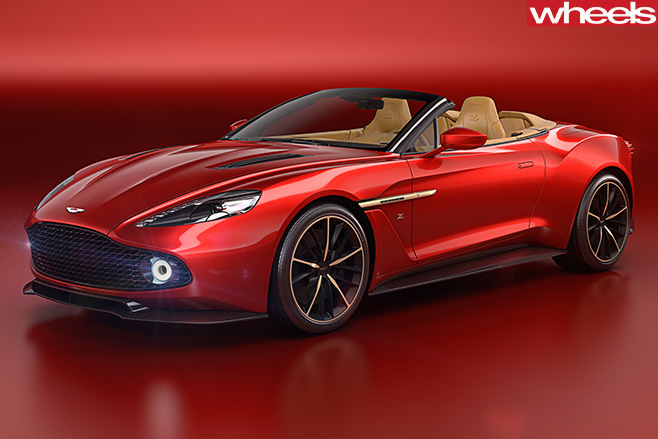 Not to be outdone by Lamborghini, Aston Martin revealed a new convertible at its pop-up dealership at Pebble Beach. An open-topped version of the stunning Vanquish Zegato coupe, the Vanquish Zegato Volante features the same 441kW V12 engine with a 0-100km/h time of 3.7secs.

The Vanquish Zagato Volante shares its proportions with the Coupe, including round tail light reflectors that use the same 'bladed' LED technology as the Aston Martin Vulcan supercar and a carbon fibre ledge around the lower body.

As you’d expect it’s pretty impressive inside too, with highly luxurious finishes including herringbone carbon-fibre, anodized bronze detailing and Bridge of Weir leather. The Volante features the unique signature ‘Z’ quilt pattern stitch on both seat and door sections, as well as the celebrated trademark Zagato ‘Z’ embossed on the headrests and stitched into the centre console.

Previous Aston Martin Zagato convertibles have included the striking V8 Vantage Volante, first shown in Geneva in 1987 and the DB7-based DB AR1 in 2003. Like the DB ARI the Vanquish Zegato Volante will be limited to 99 cars with delivery commencing next year.

Chances are most of them were sold at the weekend.