FERRARI'S devotion to the dozen has never deviated.

The company was founded on V12 power, and has been faithful to the format now for 70 years. And the V12 engine remains as exotic today as it ever was.

Seven decades ago it was a path to power few dared or cared to follow. This remained the case through most of Ferrari’s long road car history. Today there are more straightforward highways to hell-raising performance than 12 cylinders and high, high revs. But, at least for its elite models, Ferrari spurns them.

Hope that this remains so. Pray to your preferred God if you think it will help. For there are few other engines on this earth quite so worthy of veneration as the latest Ferrari V12. 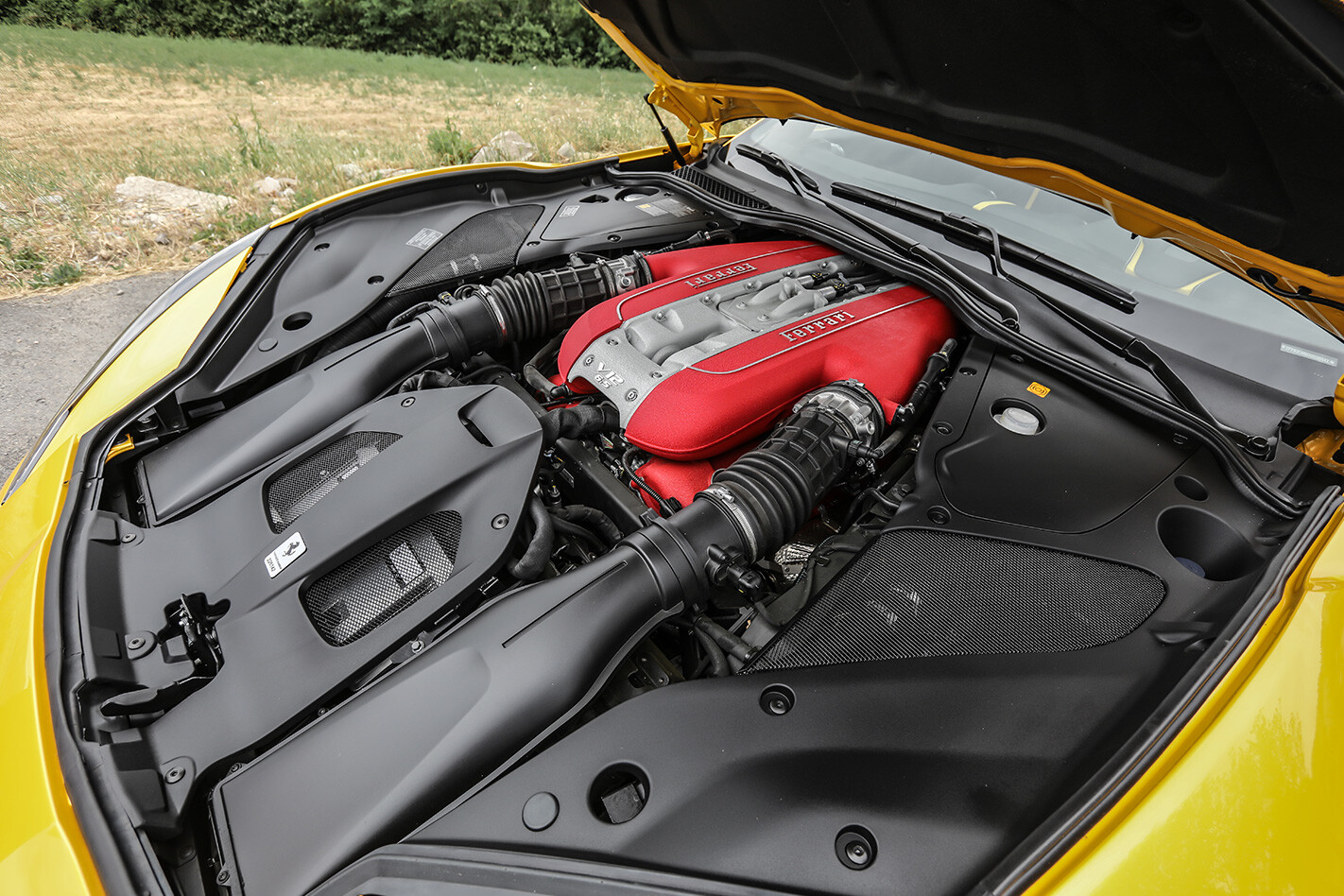 At the end of the Ferrari 812 Superfast’s throttle travel there’s 588kW. Exactly 800 metric horsepower. So, with the exit to Fiorano’s tight Turn 6 hairpin coming into view, I squeeze the throttle until it squeezes no further. Just as I’d seen Ferrari test driver Fabrizio Toschi do during the two-lap, two-up familiarisation just minutes ago.

Ferrari’s electronic expertise these days never fails to amaze. The broad Pirelli P Zero rear tyres (315/35R20)take a bite of the bitumen and viciously spit the 812 Superfast forward. No dithering, no slithering.

The 75-percent-new V12 has a little more capacity than the 6.3-litre of the F12 berlinetta. While the cylinder bore dimension remains unchanged, it has a new crankshaft to increase stroke by 2.2mm. New pistons and rods and cams, too. And all-new cylinder heads, the first in the world into production with new high-pressure, high-precision direct injectors made by Bosch. There are new hydraulically actuated but electronically controlled F1-style variable-length intake trumpets (made in-house) hidden inside an equally new intake plenum with enlarged throttle bodies. 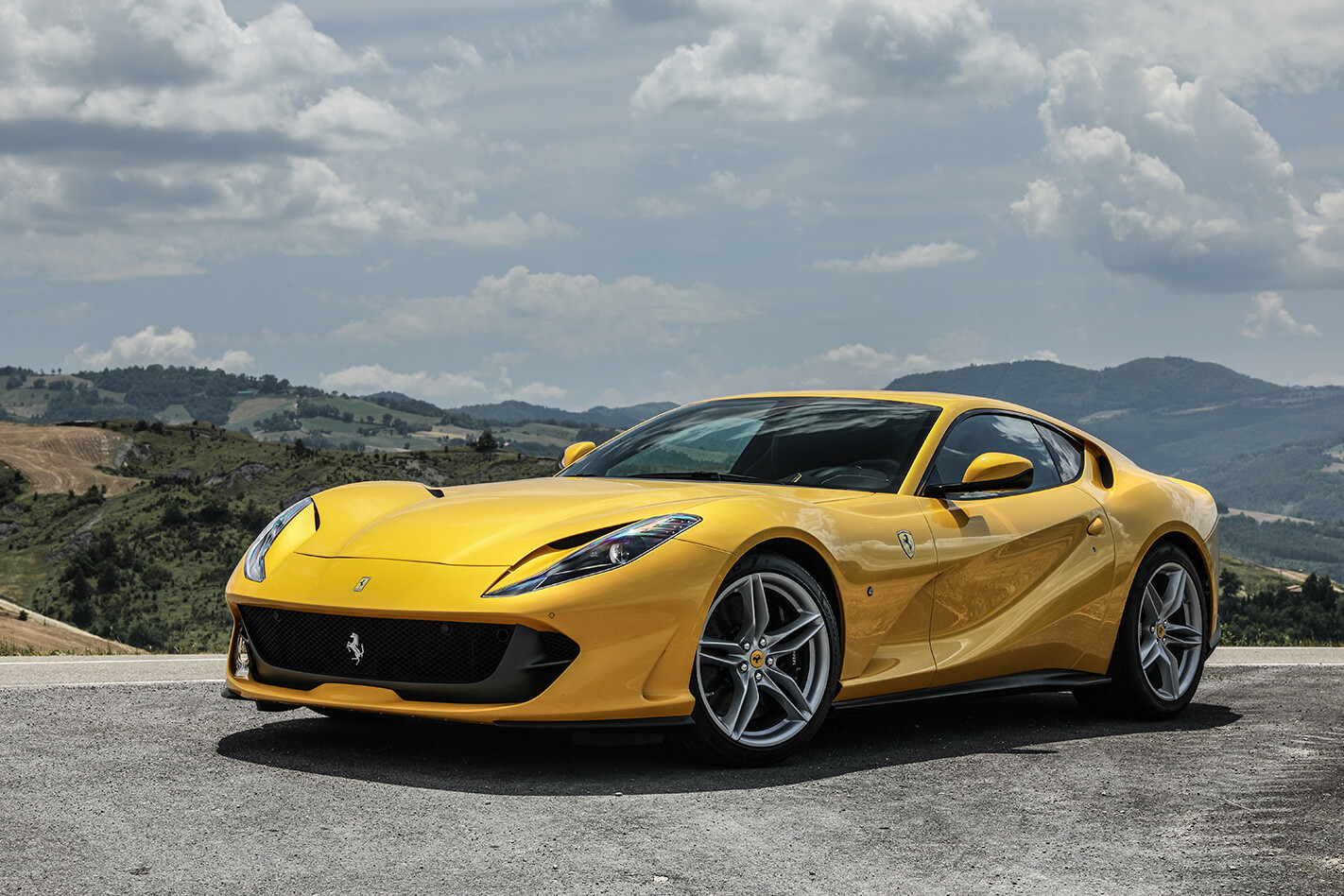 Result? Everything moves up, not just capacity. Specific power increases. The peak torque and power points climb up the rev range, which is extended slightly to 8900rpm.
So Ferrari’s engineers naturally chose a set of shorter ratios for the seven-speed dual-clutch transmission for a smaller drop in engine speed with each upshift. With the throttle pinned, this means more power on tap in the higher gear. It will do 0-100km/h in 2.9 seconds, they say, and 0-200km/h in 7.9 seconds. Which is exactly what I’m experiencing…

The V12 shrieks beyond 6000rpm, past the 7000rpm peak torque point and through the 8500rpm max power mark. The 812 Superfast's long-bladed column-mounted shift paddles are lovely to use, but I’ve set the transmission to Auto. To avoid time-wasting encounters with the limiter, you understand. The grearbox snaps the second to third shift through in a fraction of an eyeblink, just before the needle kisses 8900rpm on the big yellow tachometer in the centre of the instrument cluster.

I’ve selected Race on the manettino, which enables the 812 Superfast’s uprated transmission actuators to shift even more speedily than the F12 berlinetta could in the same mode. Yet the gearchanges are firmly decisive rather than thumpingly brutal. 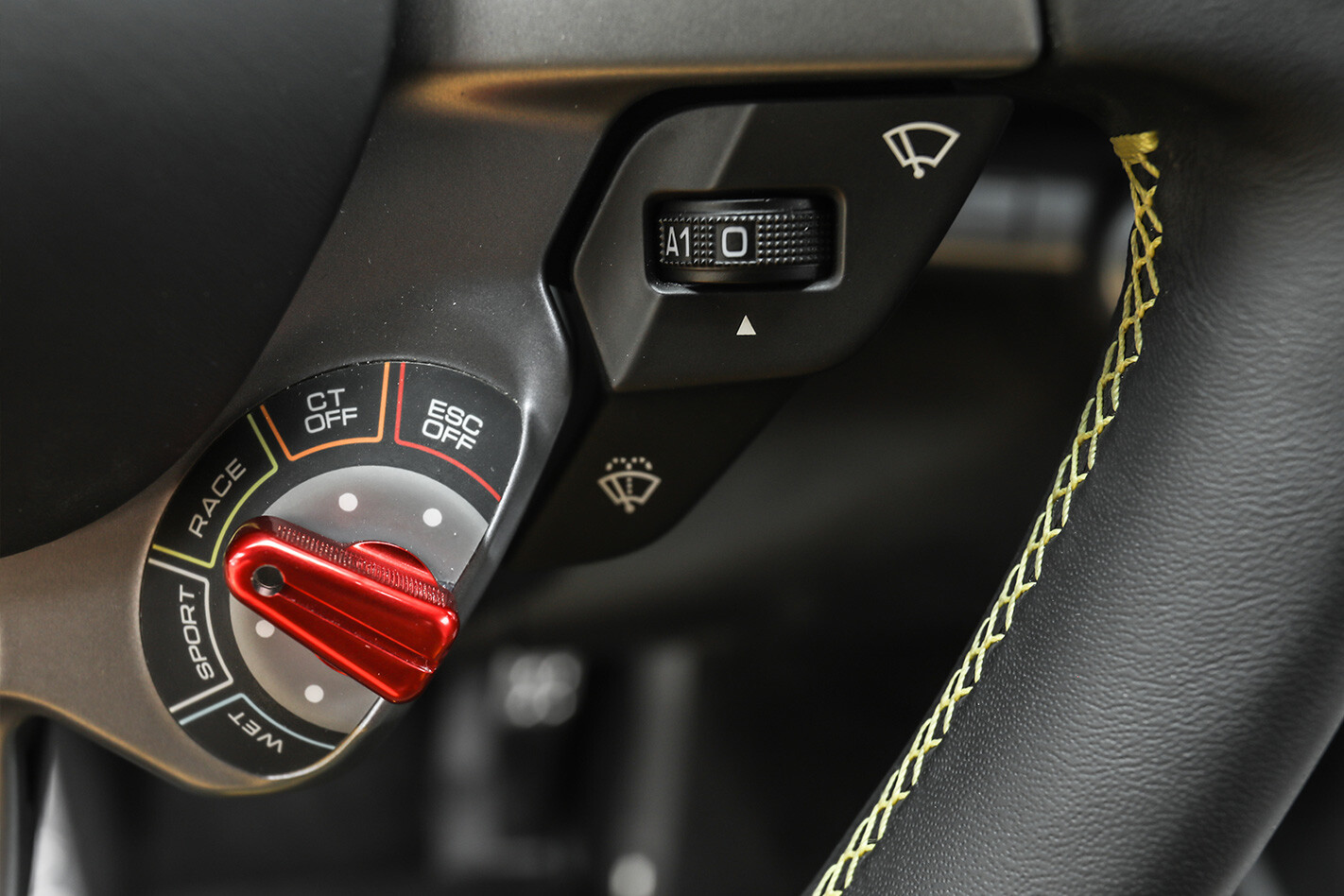 Soaring sound and searing acceleration aren’t all that’s in the 812 Superfast’s repertoire. Just as Ferrari’s drivetrain engineers sought and found more, so have those working on the big rear-drive coupe’s dynamics.

Wider front tyres are only part of the story. The 812 Superfast introduces a major change in steering hardware, adopting both electric assistance and the rear-wheel steering system Ferrari calls Passo Corto Virtuale (which translates as Virtual Short Wheelbase). PCV was first seen in the hot tdf version of the F12, and it’s updated to Version 2.0 for the 812 Superfast. The front and rear steering systems are now connected, but only by Maranello scripted software. Ferrari’s rather good Side Slip Control system, introduced in the 458 Speciale, is also upgraded, to Version 5.0.

Around Fiorano the car’s grip, especially on turn-in, is simply phenomenal. There’s feel through the steering, too, though it doesn’t seem quite so direct and lively as the F12 berlinetta’s. The operation of the 812 Superfast’s PCV 2.0 is so totally transparent that it’s never a distraction. The aim of Ferrari’s engineers was to employ technology to enhance agility and stability, thereby boosting driver enjoyment. They did not fail. 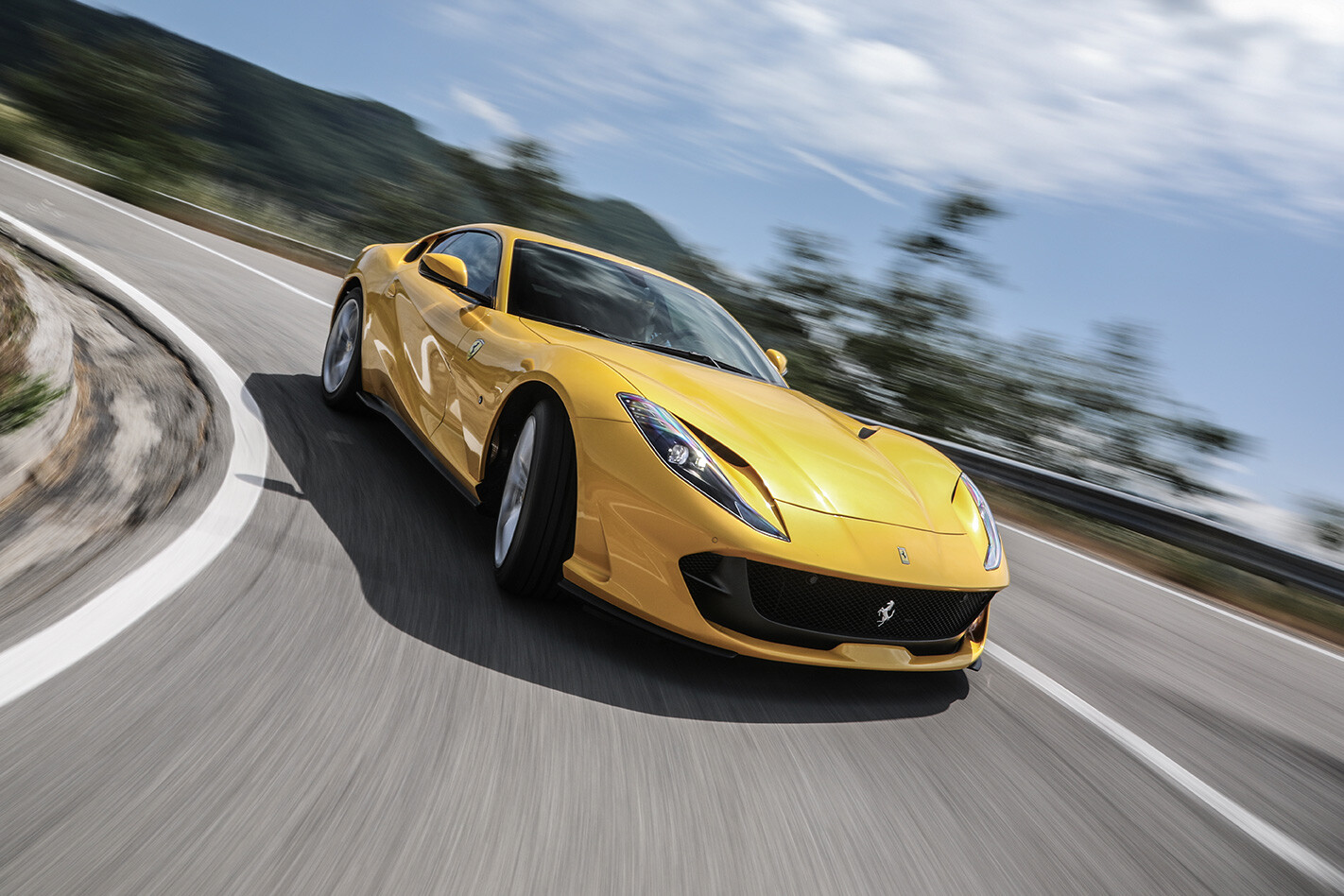 Stability was also the aim with the new bodywork. The pierced exterior of the 812 Superfast peels slices from the rushing air and bends them to its wailing will. The decision to raise the tail 30mm compared to the F12 berlinetta and to install lift-reducing ducts above the rear wheels inevitably adds some visual weight to the tail, but it’s muscle rather than flab.

Once outside Fiorano’s fences, it’s a shape that inevitably attracts attention. From Maranello we head south and climb into the Apennini, the 1500km-long mountain chain that runs groin to ankle down Italy’s leg-shaped peninsula. In a village near the halfway point of the 140km test route we drive into a car park hoping to find a coffee bar nearby. We’re followed in by a police car…

The female officer of the Polizia Locale admires the bright yellow Ferrari and is obviously thrilled when we tell her to try the driver’s seat. Still, she does ask to see the 812 Superfast’s prova plate paperwork. Once she’s satisfied all is in order, I ask if she knows a coffee bar nearby. Nothing open in this village she says, but she’ll happily lead us to one that is. So we tail her Skoda Octavia wagon a few kilometres to the ski resort town of Sestola. The bar she points us to makes a good espresso.

The winter cycle of freeze and thaw is hard on roads up here. There are lumps and slumps and cracks in the bitumen ribbons now taking us back down and north towards Maranello.

Only a supremely confident company would have chosen a test route like this which is sure to expose suspension shortcomings. The manettino is now set to Sport, the right mode for everyday driving. While the Ferrari’s body motions are firmly disciplined they’re never curt. The engine is amiable at light throttle openings, yet ever-ready for a lunging overtake. And the transmission is impressive here, too. It shifts very smoothly for a dual-clutch when wafting in Auto mode, but seems almost able to instantly sense any change in your driving mood. Just thinking about upping the pace is enough to invoke a downshift or two. At least, that’s the way it seems from the firm and supportive driver’s seat.

The 812 Superfast’s interior decor is different from that of the F12. The instrument panel is an all-new design that embeds modern technology in an expanse of hand-crafted leather… and it somehow works.

The 812 Superfast’s size, especially its width, can be daunting on narrow roads. On the other hand, there’s ample space for two in the cabin and room for a reasonable amount of luggage in the boot. The car’s big 92-litre fuel tank means it can carry it a long way without stopping.

For sheer, breathtaking breadth of talent the 812 Superfast really is a car without any obvious rival. Or, given what it was designed to do, any serious flaw. It’s a great home for an even greater engine.