DOES New Zealand have the wood on Australia as a driver's paradise? Could a more affordable alternative to Europe be right next door?

First published in the November 2010 issue of Wheels magazine, Australia’s most experienced and most trusted car magazine since 1953.

Before you execute this proposition at the altar of Antipodean rivalry, first consider the benefits. No more arduous and expensive trips to the Swiss or Italian Alps for a great drive. No more pouring hard-earned cash through an unfavourable exchange rate into a Fiat diesel renter or being overtaken by tourist buses on the Stelvio Pass. No more clumsy heel-and-toeing, narrowly avoiding head-ons and massively missing apexes because you're sitting on the left and driving on the right. Imagine, if you will, an automotive wonderland much closer and cheaper than Europe. A country where driver and car sit on the correct sides, and where the exchange rate falls considerably in our favour. And where the locals speak the same language ... almost. Yours truly has driven the Stelvio and Gavia Passes in Italy, the mountain roads in Andalusian Spain and many other European ribbons of awe. I've also laid rubber on dozens of great Australian roads, most of which either cross the Great Dividing Range or trace our coastline. So, a fair base from which to judge New Zealand's meandering contenders for car-driving heaven . As for impartiality, well ... I am a Kiwi. And, sure, I support the All Blacks. But I've never lived in Bondi, collected dole money or practised animal husbandry. When it comes to the pursuit of bitchin' bitumen, though, we're all brothers, Bro.

Point 'A' for this investigative expedition is Queenstown, a h0liday resort in the South Island's Otago region. A bold red Nissan GT-R sits ready and waiting when photographer Chris Benny and I arrive. First contender is the 40km run from Queenstown to Kingston that stretches south along the eastern shore of Lake Wakatipu. Mountains crash dramatically into the lake, leaving the road little choice but to buck and shimmy with the contours of the shoreline. Traffic is on the light side of sporadic and the road surface is clean and grippy, though coarse-chipped.

The mountainside is devoid of trees, so visibility is excellent and bends come into view stacked for attack. The GT-R laps it up, slicing around corners and thundering down straights. The ferocity of its twin-turbo 3.8-litre V6 is invigorating and easy to control, but our relationship is very much a tentative one. Even so, corners fall beneath its wheels as the car flows effortlessly. 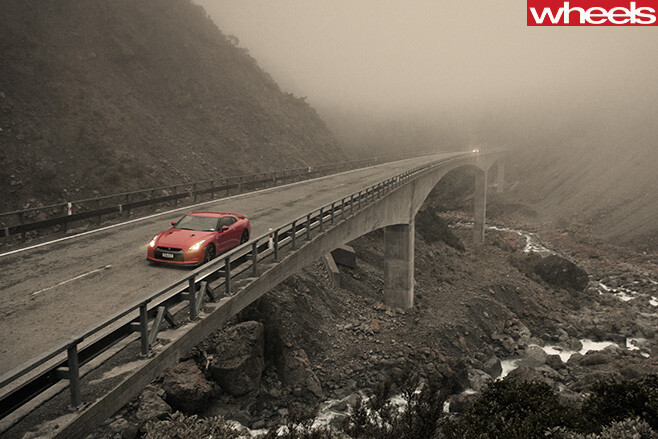 The Nissan's engine is progressive in its power and torque delivery, though there's little reward below 3000rpm. If you listen hard, you can just hear its likeable gravelly timbre through the turbocharged onslaught. Benny says he likes the whooshing, hurricane soundtrack. To me it sounds like Jimmy Barnes hollering through a hair dryer.

This lakeside ribbon of black sets a high benchmark first up. The transport stage from Kingston to Te Anau, where our next candidate starts, cuts through lush green farmland covered with livestock- none of it white or woolly. A farmer tells us New Zealand's deer population is burgeoning because there's more money in venison than lamb, cuz. The in-car conversation stutters to life, and will not stop for six days. Benny's dad once owned an R32 Nissan Skyline GT-R with 450kW at the wheels. He let his two sons drive it from time to time. Clearly he was an extremely trusting chap ...

This R35 GT-R is my first Godzilla of any generation but I'm rapidly gaining an appreciation for the legendary abilities that led to its predecessor's total domination of the Aussie touring car scene in the early '90s. In the dry the R35 is a phenomenon, its 357kW/588Nm turbo-six a primal force of surging power and torque.

It rides the road with consummate ease at speeds that would have us tarred and feathered back home - here too, if there was anyone around to train a radar on us…