In 1971, Wheels gained an exclusive first drive of the car conceived by Ford to win Bathurst, the Ford Falcon GT HO Phase 3 – and using that now-famous doctored photo. Even today, this edition stands out as the magazine’s biggest-selling issue.

The refinement job is good. It is designed to let the HO rev more easily for sustained higher speeds, run smoother, cooler and more reliably. Which may or may not be the success story for Bathurst, '71.

But entirely regardless of what happens on the race track, this new, sophisticated HO turns out to be a far superior car on the road to its predecessor.

The engine refinements, while not producing great bags of power over the old HO, make it smoother, more flexible and less of a "strain-at-the-leash" beast.

It is now approaching the realm of an acceptable town car and is even more desirable as the quickest open-roader Australia can offer.

The changes to the engine are: greatly improved extractor exhaust, sump baffles, bigger 780 cubic feet per minute, Holley four-barrel carburettor (750 cfm in the Phase Two). The head gaskets are also new, and more importantly the crankshaft is now specially toughened and its damper has been enlarged. The radiator is bigger and overall cooling more efficient.

On the road cars, an electrical cut-out limits revs to 6150 – the track cars, properly blue-printed and balanced, should run to 7000 without complaint. Ford is still rather naively saying the bhp is the same as that of the standard GT - 300 at 5400 rpm. It is probably nearer 380 bhp.

Another important development in the Phase Three is the availability of close and wide ratio gearboxes, and three diffs - 3.25, 3.5 and 3.9 to one (the Bathurst cars will run the 3.25 ratio).

There have been slight alterations to the front and rear suspension, the rear brake drums, the front callipers and there's now a power booster vacuum reserve tank.

Ford Special Vehicles man John Gowland says simply: "There are no big changes - we've just ironed out a lot of little things, smoothed the car out." 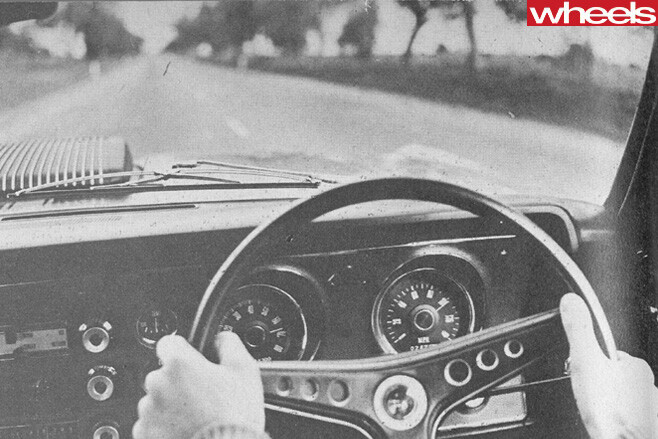 We were the first journalists permitted to drive the Phase Three. Rather than try to see how much quicker it is around a race track, we took it through peak hour traffic and on a fast 400-mile run to see how it rates as a pure road car.

The "smoothing out" process is obvious. The engine idles at 900-1000 rpm, considerably lower than that of an average Phase Two, and is nowhere near as lumpy.

Drivers may still blip the throttle at the lights, but the only real reason for this is to listen to the magnificent engine sound.

There is now no great drama about moving the car off from the lights, either. Where the old HOs needed care and a slipped clutch to stop them stalling, the new one asks for nothing more than everyday clutch and throttle action.

It is a remarkably easy car to drive considering the incredible performance that's only a throttle push away.

In city traffic, we trundled the HO up to 2000 rpm gearchanges (that's 16 mph in first, 24 mph in second and 34 in third) before dropping into top just under the 35 mph speed limit. It's here the Phase Three shows its better manners - it will crawl along from 1500 rpm in top, although, of course, such a high performance 11 to one compression engine doesn't entirely hide its displeasure; This sort of low speed flexibility was non-existent in top in the old car. It bucked and shook at 40 or below.

The new smoothness continues right through the rev range with the only thing approaching a cammy feel at just over 5000 rpm. And then it's not nasty, just a greater surge forward.

Getting off the line for performance runs, we found dropping the clutch at 2700 rpm was critical. Three grand was too much, resulting in the wheels spinning hard for more than 200 yards, and 2500 was not enough, letting the car bog down and wasting time.

Even so, the car was much easier to boot away hard than we'd expected. There was just one side twitch, held easily by a twist of opposite lock, then it was away with a magnificent sonic boom to lay 14.7 quarters (little better than Phase Two times) but a phenomenal 0-100 mph time of 15.2 seconds.

As a very fast touring car, the HO is superb. We found it easier to drive than a standard GT, mainly because of its greater precision, better, tauter handling and .the ultimate in sensitive power application.

It hangs on incredibly in the wet (our test car ran Dunlop Aquajets at 30 psi all round), and only a fool booting the power on hard in a tight bend or a low gear would get the rear to snake. Understanding and respecting the power is the name of the game. The front and rear spoilers which begin to exert downward pressure from 90 mph help make the car inherently stable at all times. But steering' a little more sensitive at the straight-ahead would be a welcome addition...

The steering is lighter than an ordinary GT, a point that contributes, along with the light clutch, gearchange and light brake pedal, to the easy-to-drive feeling.

The ride is firmer than a standard GT, too, but we preferred it that way for the assured feeling it imparts. It is still comfortable.

Things we didn't like about driving such a fast car were the lack of a headlight flasher for the otherwise excellent lights, and the long reach to the windscreen washers and wipers.

The fuel bill will also cause a few headaches - hard-pushed, the car does a neat 8 mpg. With slightly quieter driving it- will give 10.4 mpg - don't expect much more.

As a fine, ultra-high performance car that will be beaten by nothing under $20,000, the only problem area we found was the brakes. While they stop the car fast and true in normal circumstances, two hard stops will have them fading badly. We brought this up with Ford and it says the reason is that the road cars are running much softer linings than will be used at Bathurst because of the hard linings ' high pedal pressures. Nonetheless, we think anyone who buys a HO (and one dealer at Orange in NSW has sold four already) would be well advised to fit the harder linings.

AS WE WALKED through the car park to leave the You Yangs proving ground after the TC Cortina press release (full test next month), I happened to ask Don Deveson, now manager of Ford's  Broadmeadows plant, what was in his new Falcon. Was it just a Phase Three HO?

"Nup," he grinned, opening the door. "Phase Three plus. She put out 232 bhp at the rear wheels on the dyno yesterday."

Luckily, Mr Deveson's arm is twistable, and he agrees to run a Melbourne journalist and I several laps around the You Yangs high-speed bowl.

Trundling down the bowl's approach road at 30 mph in first (because the 11 to one compression engine doesn't like being under 40 in second or third) Deveson turns down the eight-track stereo to tell us about his latest toy - it's running a Cobra Jet cam, manifold and 850 cfm carbie, a 2.92 diff instead of the normal Phase Three's 3.2 and big, big Kleber radials. Six QI spotlights hide the grille, inside an air condjtioner complements the stereo and at the back there's a tow bar to pull his boat at weekends.

After two warm-up laps run at a quiet 75 mph in third, Don's left hand drops to the gearstick and he pulls it back into second slot. The nose lifts and the howl is unbelievably magnificent as the 351 flies to 80 mph in second with plenty in reserve. Into third, and we go around the banking once more in this gear - but this time the tach is reading 6500 rpm and the speedo (which is dead accurate) is saying 130. Yet the car is far from flat - having the air conditioner means fan belts won't stay on above 6500 rpm, although the motor is designed to run at 7000 rpm for Bathurst.

At last it's in top, and equally as Deveson's foot eases down on the throttle, the speedo needle climbs. At 140 it runs out of graduations on the standard GT dial; and when it nestles where 145 should be, Don levels off momentarily. The clinical, totally controlled conditions of the track, the car's incredibly tight feel on the road and Deveson's smooth driving make it seem like it's all happening in slow motion, so all you can do is listen awe-struck to the exhaust note rising and watch the speedo needle climbing again with incredible speed. Finally the tach stops at 6500 rpm and we are doing precisely 160 mph.

On the deceleration lap, Dev drops back to second and runs the engine to 7000 rpm - just once, to show us how effortless it is, V8 and all. And leaving the track we all smile as we see the three attendants who have been standing stock still for 10 minutes just listening to the boom echoing from the speed loop walls. We don't know it then, but two miles away 50 Cortina press release people have streamed from their luncheon tent to listen, too, and wonder.

But nothing they say will sum up this incredible sedan like the comment of the journo from Melbourne, who said when Deveson first started the engine: "Could you turn the stereo down, please? I can't hear the exhaust."