Plans for Dick Johnson's SVO - Special Vehicles Operation - call for building 500 distinctive Falcons. Not V8s, but high-output sixes with the emphasis on quality and refinement

Plans for Dick Johnson's SVO - Special Vehicles Operation - call for building 500 distinctive Falcons. Not V8s, but high-output sixes with the emphasis on quality and refinement.

THE THREE-SPOKE Momo steering wheel is mounted drastically off-centre and the speedo, I'm informed, doesn't work. Under the bonnet, the alloy valve cover has been vandalised with a marker pen. Yet this cobbled-up Dick Johnson Falcon SVO is the prototype for something very significant – a sports-luxury Falcon to compete with Holden dealers, and with Peter Brock's HDT Special Vehicles.

Sports-minded sedan steerers have been turning to the HDT for more reasons than the simple unavailability of a Ford VB. Excluding the limp-wristed S-Pack series, there hasn't been a hot-looking, high-performing Falcon since the XE-model ESP in 1983.

Dick Johnson has felt like the captain of a football team that doesn't have a ball. His attempts in 1984 to throw the Falcon Turbo into play were nixed by the coach, but this only made Johnson more determined. Ever since warranty worries took the boost out of that Turbo attempt, Johnson has toyed with the notion of having his own Special Vehicles Operation, like Ford's highly successful SVO in America. The scheme would also, of course, give his Holden rival a friendly nudge in the sales race. 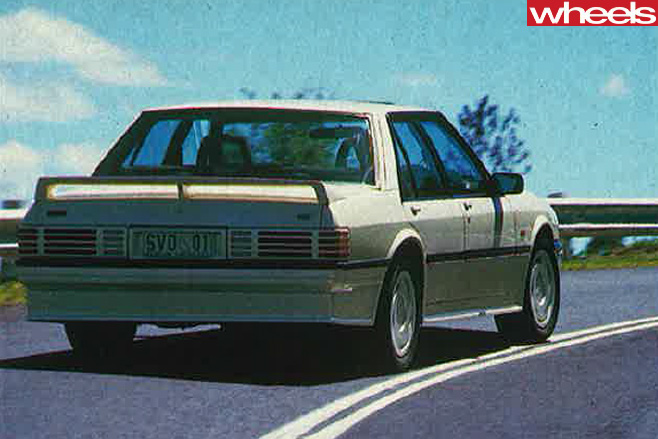 Formation of Dick Johnson's Special Vehicles Operation, in partnership with friend and sponsor Ross Palmer, was duly christened with announcement of the limited-edition Falcon SVO. Johnson's Falcon SVO is very much the product of lessons learned from the Turbo, which ran many thousands of kilometres' testing in Australia and Japan, only to be knocked on the head at the 11th hour. Initial hopes had been to retain and further develop the turbo EFI 4.1 engine for use in the completed Falcon SVO package but Ford Australia, in the meantime, had been bitten on the ankle by a little turbo terrier and advised against it.

Peter Harden, an expatriate Aussie engineer who has worked with the Tyrrell Formula One and VDS Can-Am teams in England and the US, was enlisted to steer the Falcon SVO project along while Dick and the boys got stuck into the Green's-Tuf Group A Mustang.

Ideas rolled around, and the five litre V8 of the American Mustang came briefly under consideration as Harden's body designs neared completion in mid-1986. The 302 High Output engine offered roller camshaft, various durability bits, and 168 kW out of the crate.

Parts availability was one major problem with this US engine. The likelihood of having to crash-test a V8-engined XF to gain ADR approval for the projected build of 500 cars was yet another. Finally, when the cost of buying each complete engine/gearbox unit from the States nearly tipped five figures, the 302 HO engine was understandably abandoned. 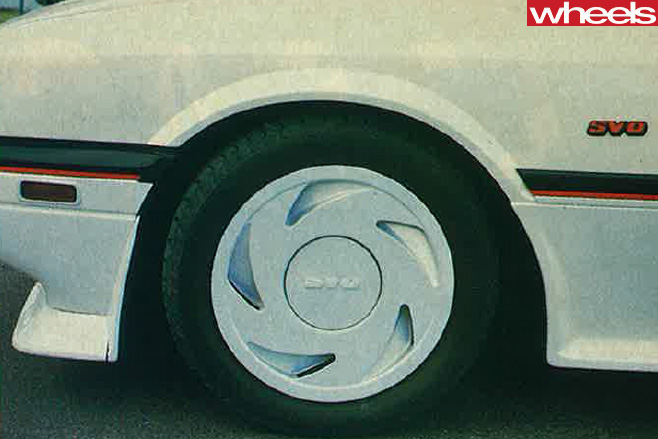 But they don't call Johnson "Tricky Dicky" for nothing. He knows the power figures he wants for his Falcon SVO, and he knows where to find them ...

The first place any dinky-di Queenslander looks for anything is in his ute. Dick's crew turned its attention to the 4.1-litre, carburettor hack ute that had given the workshop many months' reliable service (and had also starred in a magazine advertisement).

In either carburettor or fuel-injection forms, Johnson believes the 4.1-litre engine's biggest performance problem is its inlet system. Chasing at least 150 kW for his proposed SVO engine, Johnson did some parting on the standard inlet manifold with the aid of the race workshop's flowbench facility. That work, along with other modifications including a different cam grind, netted 147 kW on the engine dyno. Using the flowbench, the SVO crew now intends to design its own inlet and exhaust manifolds.

What is not certain just yet is the engine to which they will be bolted. Dick knows he can get the 150-160 kW he wants from a carburettor engine, albeit with a lot of fiddling to accommodate unleaded petrol.

The prototype, meantime, was fitted with a leaded EFI engine, its only modification so far being a 280-degree duration camshaft. Even with the standard injection system and top-end intact, the prototype shows a mid-to-top-range zest quite foreign to the common or garden EFI engine.

Valve timing will become a major factor in enabling the SVO-modified unleaded engines to meet emissions requirements. With the engines still undecided, there's a bit of work yet to be done. Peter Harden says the heads will be surfaced to raise the compression ratio to about 9.5 to 1 - the perfect environment for Dick's new sponsor's product, Shell Ultra 96-octane ULP. Passengering white-knuckled with me in the prototype, Harden added that the car was "only a fraction of what it will be" when production starts in February. 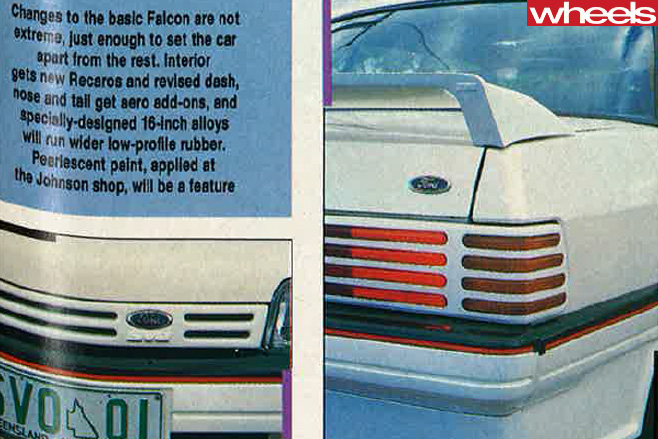 Drive is taken through Ford's heavy-duty clutch - a stronger Borg and Beck unit is under consideration - to the now-optional Borg-Warner T5 transmission. This new five-speed manual has drawn praise for its strength, combined with its lightness of operation. At the rear end is Ford's optional limited slip cliff, with the new 2.92 to 1 ratio mated to the T5 transmission on production SVO cars. The prototype used a 2.77 LSD from the superseries four-speed manual.

To obtain the desired engine/transmission/diff arrangement the 500 production SVO cars will be built from basic S-Pack Falcons, ordered through dealers, before the mechanical and paint magic takes place at Johnson's SVO workshop.

The prototype sits just a tad Iower than the production cars will – this will be set up to the ride height specs for the XE ESP model. Final suspension testing had yet to be done on the prototype; its rock-hard ride was ample evidence of that. Re-rated springs and beefier anti-roll bars will come from Lovell's, and Johnson is a great believer in Bilstein gas dampers.

The prototype's venturi-style wheels aren't quite what they may seem. These fibreglass covers on 16x7 steel wheels are, however, the models from which ROH is casting exlusive SVO alloy wheels. They will be colour matched to each car, with a locking security cap. The wheels are unidirectional, as are the Bridgestone tyres.

Four-wheel discs are a direct carry-over from the standard Falcon S Pack, but could be in need of some attention if the car is going to gain more than 30 kW over Ford’s claimed engine power output. As it happened, the pedal on the prototype lost most of its feel after several runs at the same downhill corner. 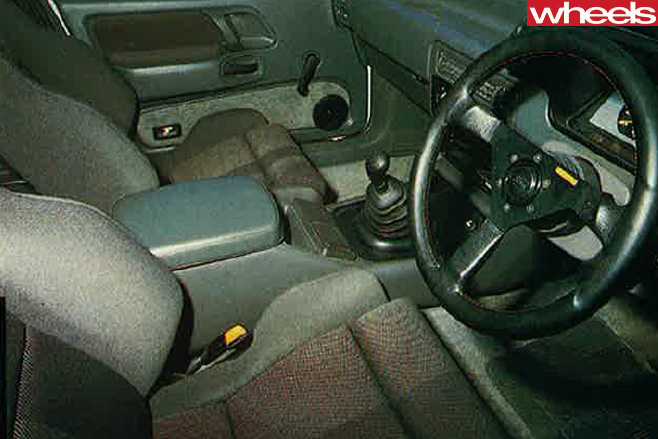 Certainly in no danger of fading was the interest shown in the car. When the Brisbane sun hits the pearlescent paint, all seems right for the world. This car, finished in in white pearl with a thimbleful of yellow tint, looks more moody than the Moors Murderer when clouds pass overhead.

With a projected price of $35,000, Dick Johnson SVO fully appreciates the quality expected. Shells will be effectively stripped, doors re-hung and the two-pack base coats and paint all applied at SVO headquarters. That striking pearlescent finish will be a feature of each of the 500 cars, irrespective of the actual colour.

Peter Harden is responsible for the Falcon SVO’s handsome styling. The prototype kit –comprising deep front spoiler, grille, side sills, rear wing and bumper extension – was made in fibreglass, but SVO is having moulds made to manufacture the components in more durable polyurethane.

The styling kit, as you see it, is virtually the genuine banana except for the rear bumper extension. “I never liked the rear underside of the Falcon, with its guts hanging out," says Harden. "The bumper extension is about an inch too deep as it is, though, and it'll be raised an inch on the production cars."

Badging is kept to a minimum, the aim being to establish the Falcon SVO as being a luxury car as much as it is a sporting sedan. Johnson, obviously unable to meet the Brock Commodores head-on in V8 territory, is putting his manufacturing emphasis on quality and refinement. "The numbers aren't as important to us as getting the cars out at the right quality - so we don't have to look at 'em again every week."

The strip and re-fit job will extend as far as a Webasto full electric sunroof, the quality of trimming on the prototype's roof lining entirely in keeping with that of the deep Recaro buckets.

Roman Automotive, distributor of Recaro, is at work on some special “SVO" trimming for the seats to be used in production cars.

A special SVO instrument pack replaces the standard Ford fare, though it's not particularly obtrusive. The analogue speedo and tacho carry through a 340 degree sweep, instead of Ford's odd 180 degree arrangement, while the LED fuel and ancillary gauges remain.

The speedo is now a 240 km/h item - you never know your luck on the Nullarbor - but the tacho remains redlined at 4800 rpm in spite of Peter Harden's assurance that their engines will be good for 5500 rpm.

Harden was worried that our drive in the prototype would fail to reveal the true potential of Johnson's SVO venture, but through the Falcon's overly stiff ride and slightly coarse engine shone the obvious fact that some irresistible force was finally being applied to the old immovable object.

The prototype skated over undulations, but steered and stuck beautifully on smooth surfaces. The steering wheel may have been slapped onto its shaft off-centre, but the Recaros set us dead-straight and kept us there. The air-conditioning was disconnected, so we just turned up the Pioneer digital stereo and opened the sunroof.

Dick Johnson, Ross Palmer, Peter Harden and the boys are going to have their work cut out to build 500 Falcon SVOs between February 1987 and the date of the Ford Falcon EA26 release early in 1988; they're aiming at about two cars per working day. With sales currently flagging, Johnson's image-boosting $35,000 SVO could be the Falcon everybody's been waiting for.

The captain's picked up the ball. In February, watch him run with it.