Ford's AU II re-think is a better car. But is it good enough to tackle Commodore?

First published in the May 2000 issue of Wheels magazine, Australia's best car mag since 1953.

Ford's AU II re-think is a better car. But is it good enough to tackle the Holden Commodore?

Put simply, the AUII Ford Falcon is what the AU should have been.

Perceptibly more refined and quieter throughout, more fully featured, even better value and, to most eyes, pleasingly better looking, too.

That's only the news headlines however, because AUII improvements aren't confined to the car.

Equally important, Ford's mentality has changed for the better as well, and that wouldn't have happened, at least not as quickly nor as pointedly, had the AU mounted the expected emphatic challenge to the Commodore.

There wasn't a lot wrong with the AU package, of course. But niggles like the same old whiney Falcon engine noise, only-average brakes and a perceived also-ran attitude to secondary safety only salted the sales wounds inflicted by AU's controversially different styling. 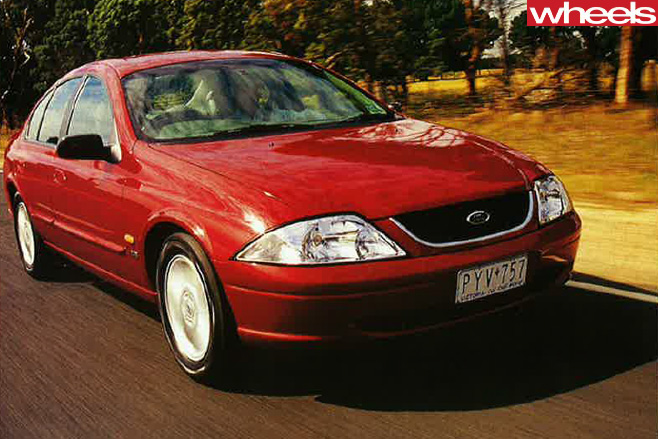 Stung by the AU's patchy sales performance, Ford pulled the facelift timetable as far forward as practicable, while also taking a long hard look at the way the company relates to Ford buyers and supporters.

There's long been a perception that Ford really cared only about pushing product and reaping profit. What came after the sale was very secondary. Henry lagged far behind Holden, for example, in nurturing owners' loyalty, let alone tapping the deep well of goodwill on offer from the devout Ford owners faction.

Such matters had been brewing for some time but the AU brought things to a head by making even affirmed Ford fans pause in their tracks. The Ford AUII Falcon signifies a shift in design direction and perhaps a company change of heart, or at least a belated coronary by-pass.

The most visible evidence of Falcon's new thrust is seen in its refreshed appearance and upgraded features. Enhancements always cost, of course, like about $1800 extra on the Forte, though Ford says that's still cheaper than Commodore Executive when passenger airbag and air-con are taken into account.

Among AUII's subtle but intensive engineering advancements, one of the most influential is the laminated firewall, a first among Australian cars and in every sense a big investment in extra refinement.

Basically, Falcon's new firewall isn't the usual single-skin pressed panel, but instead a steel-foam-steel laminate. Stamped in modified dies, the sandwich material is only a whisker thicker than the previous stuff but makes a remarkable barrier to noise and vibration. 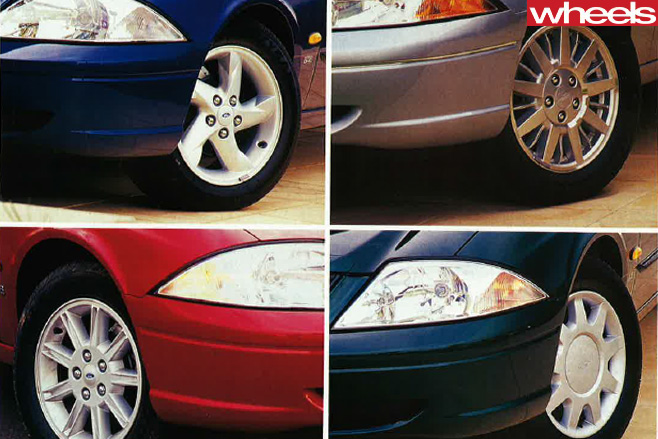 You can hear the difference. To prove it, we audited the noise levels of past and present Fairmont Ghias and Futuras. At idle, the meter registered two to three dBA improvement for AUII, equivalent to an almost halving of the sound pressure. Reductions of one to two dBA were observed in flat chat acceleration from rest to 100 km/h, also at steady 60 and 110 km/h.

Among several other claimed Australian firsts, the AUII is the only local family car with 16in wheels across the range; steels on the Forte, alloys on everything else. Shod with Dunlop or Goodyear tyres as original equipment, most models have P215/60 rubber where the S model has P215/55 and the XR6 boasts 225/SOs. The XR8, however, goes up a size with 235/45ZR17s.

The preview drive over several hundred kilometres of widely varying roads revealed that the Falcon's ride bump absorbency is even better than before, especially over small bumps and stuttery ripples.

The handling is improved also, with more responsive turn-in and less pushy understeer as a rule, and more balanced handling attitudes overall.

During AUII development, engineers found they did not need to change the suspension and steering geometry. Yet the springs were slightly softened, the front anti-roll bar slightly stiffened, a bar added to the independent rear-end, and the dampers got sophisticated valving for finer responsiveness at low velocities. 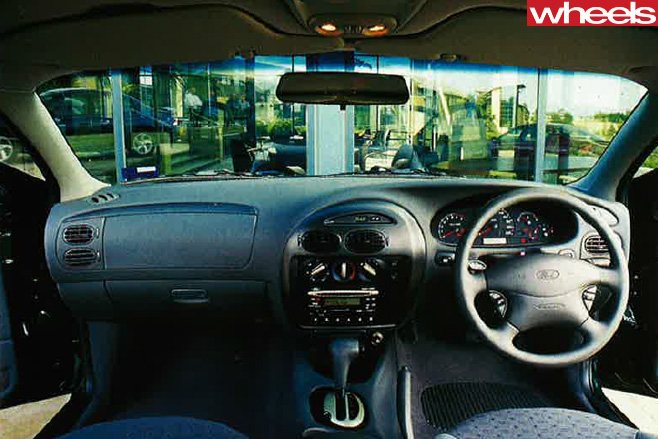 The noticeably smooth riding, confident handling IRS is again standard on XR6 VCT, XR8 and Fairmont Ghia, and optional for most other AUII sedans, excluding, among others, the XR6. For the wagon, live rear axle continues.

XRs get the option of Tickford's even bigger and better premium brake system, though only in conjunction with 17-inch wheels.

The 4.0 litre straight sixes are essentially unchanged, except there's now a dedicated LPG variant, with green cam cover for symbolism. Engineering the gas version for single fuel has led to improved efficiency.

On the V8 front, the 5.0 litre remains a 175k W option for Forte, Fairmont and Fairmont Ghia, but the XR8 version now has 200kW as standard.

Visually, AUII models' most noticeable change is at the nose. The Forte's love-it-or-leave-it 'cascade' grille has gone, replaced by a simple aperture with five horizontal bars and larger Ford oval. The Futura gets this grille, too, but with a thin silver line between the bars and body. The other grilles have also been revised, and the Fairmont bonnet adopted across the range, excepting XR and ute models.

The new wheels and tyres sit more fully in the wheel arches, and a remodelled, deeper rear bumper lends a somewhat squarer look to the tapered tail while better covering the fuel tank and suspension from view. 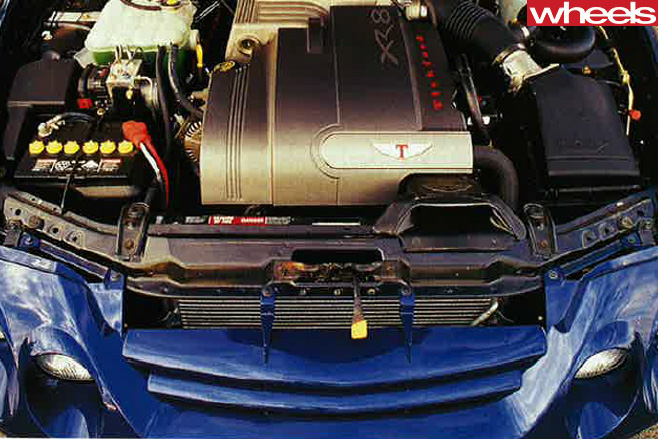 The boot lid gets a chunkier applique and new badging, and all models receive Fairmont's jewelled' taillights.

The single exhaust tips are chamfered for style, and the twin pipe outlets are slightly staggered in plan view.

No less than three different rear spoilers are included; a familiar (carryover) one for the S, a new one for the XRs (with provision for a biplane arrangement) and another new low, wing design which is standard on Futura and optional for the Forte, Fairmont and Fairmont Ghia models.

Inside, the big news items are standard passenger airbags and pyrotechnic front seatbelt pretensioners. Structural safety has been modestly upgraded, too.

There's also a new range of trim materials for each of the different models, and in most cases a choice of 'warm charcoal' mid grey tones or the ever popular dark graphite colour.

An overhead sunnies holder has been added, along with revised four-button central locking, speed alert and variable intermittent wipers.

A single CD player accompanies the upgraded sound systems in the low to mid-line models; while an in-dash six stack features in XR6 VCT, XR8, Fairmont and Fairmont Ghia. Distinctive silver finish on the CD slot, ventilation controls and gearshift surround brings touches of eye catching sparkle to the cockpit.

Not least of the interior's upgrades are the wagons' seat mounted lap-sash centre-rear belt and the fabric replacement of vinyl on the front seats' backs. But low line Falcons still don't include rear passenger overhead handholds, let alone a centre armrest.

Taking the real world AUII ownership experience by the horns, Ford has lengthened service intervals from 10,000km to 15,000km and scheduled servicing is free up to 60,000km.

That means the first four services include all labour, parts and lubricants (specified in the service guide) at no charge. On top of that, AUII's 24/7 roadside assistance brings on the spot trouble-shooting, assistance with towing, alternative transport in event of immobility, and other related services, except for taxis, daily renters and such.

Having seen, driven and generally been impressed by what AUII is and does, we're moved to say that if these changes don't tum Falcon's fortunes around, it won't be Ford's fault.

Even if the AU was.