Ford wants you, please, to reconsider its AUII XR8. There are 200 reasons why you should, writes Fraser Stronach.

First published in the June 2000 issue of Wheels magazine, Australia’s most experienced and most trusted car magazine since 1953.

For Aussie V8 buyers pride depends largely on two things, power and time. Every kilowatt added, every tenth of a second subtracted. Already whipped once in a comparison test by the VT Series II SS, Ford has a new, smoothed-over and powered-up AUII XR8 to make up for lost time. Ford has beefed up its V8's previous numbers, 185kW and 412Nm, to more satisfactory 200kW and 420Nm. The image makers have also been at work, the XR8 sporting a refreshed front-end, spoiler, 17in alloys and optional body kit.

Meanwhile, Holden has had its feet up. With 5.7litres and 220kW of alloy V8 happily ensconced under the SS bonnet, (and customers queuing to buy it) you can hardly expect it would do anything else. Power and time is on Holden's side. But for how much longer?

In their last contest (Wheels, September 1999) the extra grunt of the 5. 7 litre Chev eight was enough to bury the 185kW XR8. A full second faster in the 400 metre sprint and a crushing 3.2 seconds faster to 140km/h, the SS was clearly the straight-line king. This should have been sufficient to produce a decisive knockout but the Ford responded with a hard and timely counterpunch in the form of its superior chassis dynamics. A points decision. 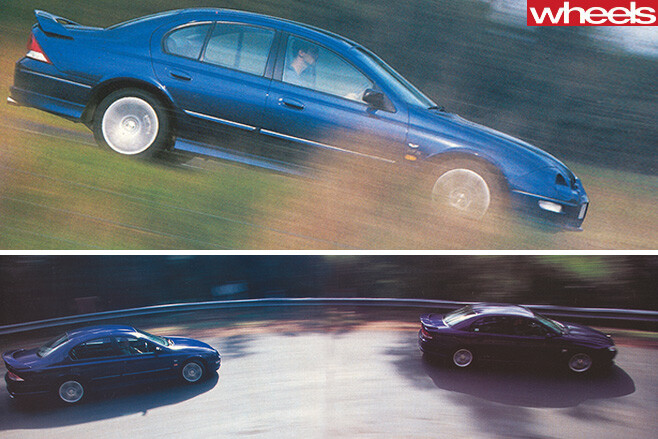 The rematch saw us return to the drag strip. On the SS's last visit here, it scorched through the 400 metres in 14.9 seconds, with 60km/h reached in 3.5 seconds and 100km/h in 6.8 seconds. That was on a slightly damp track. This time a dry surface saw 60km/h in just 3.3 seconds, 100km/h in slightly slower 6.9 seconds and the magic 400 metres dispatched in 15.0 seconds. The better 0-60km/h time was no doubt due to the drier strip, the marginally slower 100km/ h and 400m times due to the vagaries of different examples of the breed, different drivers and different atmospheric conditions. Still, consistent enough.

With a lower first gear and less axle tramp, the 200kW AUII jumped harder again, seeing 60km/h in just ' 3.3 seconds. Bit by bit, however, the Holden's 20kW advantage starts to show. Both reach 80km/h in the same time but the Ford is 0.4 seconds slower to 100km/h and 0.3 seconds slower over the 400, stopping the clock at 15.3 seconds. Marginally slower it may be, yet the XR8 has made up much ground on the SS. In anyone's language a 0.3 second shortfall over the 400 metres is better than a full second. 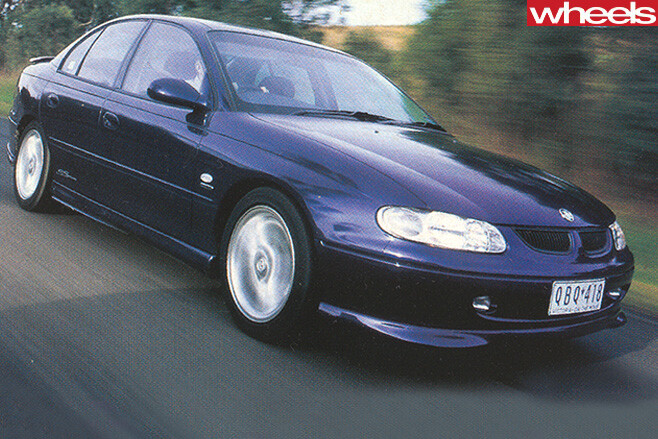 Despite the top-end tweak, the Ford's bottom-end power advantage remains. The everyday important 80 to 110km/h split tells much about the two engines. In third gear, the Holden is 0.2 seconds quicker and in fourth gear the two are line-ball, but in fifth the Ford is a full second quicker despite being taller geared in that ratio.

Neither gearbox is super slick. The Holden's six-speeder is not a close ratio unit but more like a standard five-speeder with a moonshot sixth added. This is overdrive taken to the extreme and gives around 68km/h per 1000rpm. Yes, work it out. At the legal max in most states the engine is barely off idle. The SS box is notchy and the gate is not as well defined as it should be. The Ford has a more positive gate, a sweeter but still slowish shift, and outside of the Holden's sixth, a wider spread of ratios. 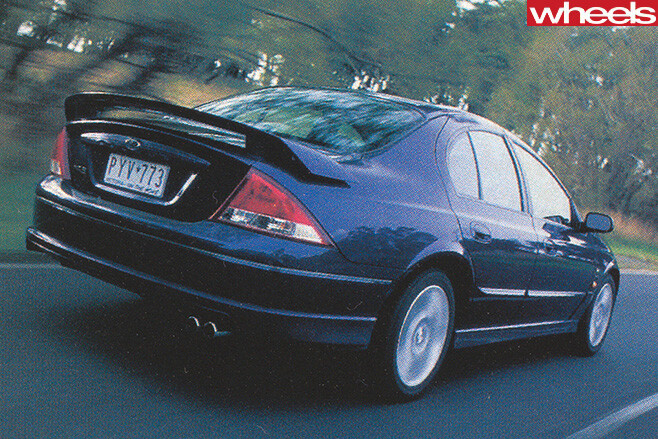 Limited-slip cliffs complete the driveline specs of both these cars. The Holden's LSD is unobtrusive but less effective. The Ford's, at least in our test vehicle, was wound up tighter than a drum and protested heavily when asked to perform mundane tasks like reverse parking and sedate U-tums. At least it did its job when the going got serious.

Both engines are silky smooth at low to middling revs, as only 90 degree V8s can be, but become a little harsh closer to their respective redlines. The Ford sounds like a 'real' V8, its exhaust note from both inside and outside the car an aural delight. Not so the Generation III Chev, which sounds muted and non-V8 like at times. Both these cars have power aplenty but getting grunt to ground along a winding road is a more complex affair than doing so in a straight line. The Ford holds the advantage here as it did before, marginal as it may be.

The Holden boasts the better straight-line steering. It's more direct and not too heavy. The Holden turns in more crisply and quickly, but that quick steering soon translates to a slightly nervous and unsettled mid-corner feel. The Holden requires more work from the driver and takes longer to get to know. Exiting a comer, too, requires a more sensitive right foot. 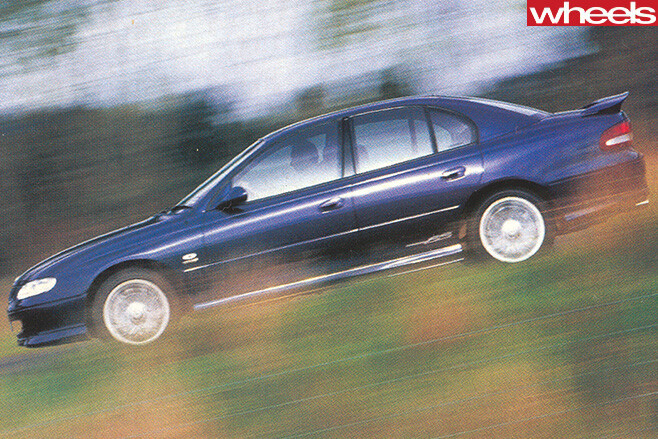 The Ford's steering requires more turns lock to lock, is rather wooden and over-assisted in feel and even a little vague in a straight line. But that's where the bad news ends. The steering, once loaded up, offers great communication with the chassis. Mid-comer feel is far superior, getting power down out of a comer fur less fussy. The Ford is simply more confident in the way it goes about the business of getting through and out of a comer. You learn to live with its tum-in vagueness.

Both cars run on 235/45 rubber mounted on 17x8 inch alloys. There's generous grip from both the Ford's Dunlops and the Holden's Bridgestones and the road shock isolation, too, is surprisingly good given how little sidewall separates road from metal. The Holden has the edge in overall ride quality, but there's really little in it between the pair. 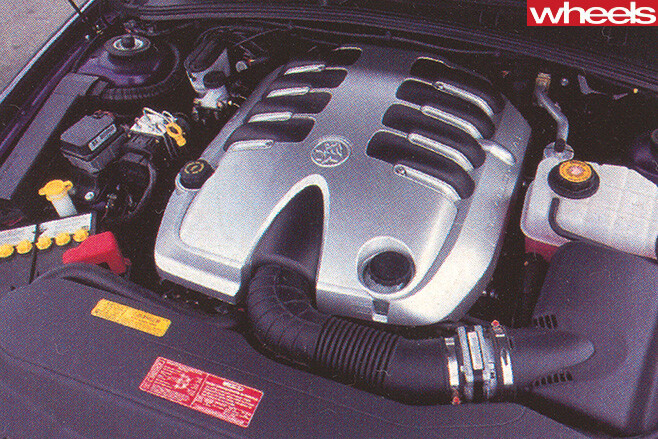 Last time we tested an XR8 we complained about the brakes, which deteriorated after several hard stops following acceleration tests. Since then, Ford has come up with an optional brake package consisting of twin-piston calipers and eccentrically grooved rotors, courtesy of Tickford. This premium brake package was fitted to our test vehicle but, unfortunately, the improved package still isn't up to the high standard of the SS's brakes, feeling rather ordinary after just five stops.

The XR8 was also fitted with optional leather making its interior an altogether more appealing environment than that of the Commodore. The Ford's instrumentation extends to oil pressure and battery condition gauges while a CD player is standard in the Ford, optional in the Commodore. For its part the SS has equally comfortable seats with the bonus of electric height adjustment. The 'SS' emblem on each seat seems out of character, however, with the rather conservative style of the rest of the car. Interior dimensions are similar although rear seat passengers in the Ford are better catered for, even if it is at the expense of front seat adjustment. The Ford's boot is also marginally bigger. 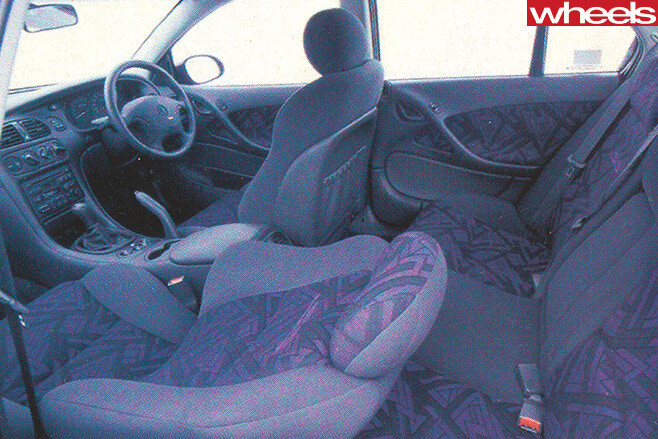 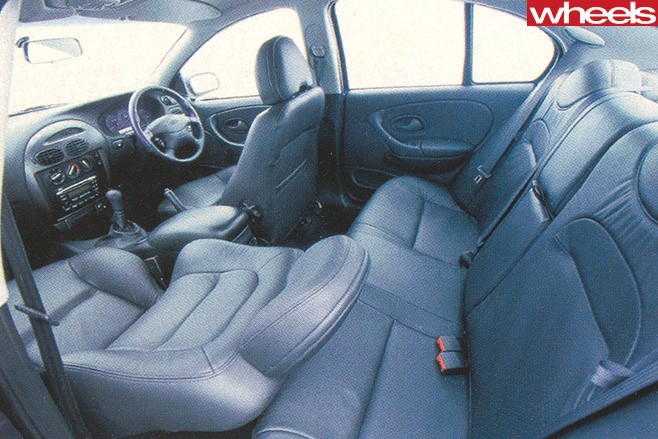 Insurance is more expensive for the Holden at $1710 against $1636 for the Ford, both prices for a vehicle garaged at Chatswood, NSW and driven by a 28-year-old. Fuel consumption is also in the Ford's favour with a test average of 13.5litres/100km against the Holden's 13.7litres/100km. Even better is Ford's free scheduled servicing up to and including 60,000km, something you'll pay more than $500 for with the Holden. Resale values favour the Holden, but only by a couple of percentage points over a one, two or three year period. The Holden has traditionally retained 69 percent, 63 percent and 56 percent of its value respectively, the Ford 66 percent, 60 percent and 54 percent.

Both these cars are enormously entertaining to drive. They have an undeniable presence on the road. Yes, they tum heads. Courtesy of their size and ancestry they also offer practical day-to-day family transport. The Holden has the grunt and the more conservative styling that will probably endear it to more people. The Ford feels sweeter on the road, but its love it or leave it front end styling may turn off some prospective buyers. The SS also felt tighter and better built, but the Ford had covered twice the distance with a hard-driven 8000km on its odo.

There's barely a struck match between these two. The Holden still holds a marginal straight-line speed advantage, but the Falcon is the better drive. It's not how much you're got but how you use it.