Engineers tend not to become heroes but some shuffle reluctantly to front and centre. Hans Mezger’s contribution to Porsche is impossible to quantify. Indeed, it’s a formidable task teasing apart the man from his legacy. So tightly wound is the bond between Mezger’s body of work and the fortunes of Dr.-Ing. h.c. F. Porsche AG that this diffident man from Ottmarsheim, a tiny village on the fringes of Stuttgart, came to almost embody the company’s fiercely competitive spirit.

His early years, being employed in Porsche’s diesel division are well documented. Let’s consider the ‘Mezger engine’ instead. When contemporary Porsche owners refer to the Mezger engine, they’re usually referring to a water-cooled flat-six developed for the 996 and 997-era 911 GT3, GT2 and Turbo; engines that were developed years after Mezger retired. Yes, some of the fundamentals of these powerplants can trace their DNA to his race-winning flat-sixes of, for example, the Le Mans-winning 911 GT1, but for those with a longer historical reach, the notion of the Mezger engine began a long time prior to that.

‘His’ engine was actually a remedial fix of a design that former engineering chief Klaus von Rucker had developed. This powerplant struggled to reach the required 130 horsepower target, eventually only making the figures when bored out to 2195cc. Ferry and Butzi Porsche knew that the engine had been squeezed till the pips squeaked to make this output, leaving little potential headroom for racing applications. For the newly conceived 901 coupe, Porsche set engine designer Mezger and engineer Ferdinand Piech to work on the dry-sumped 2.0-litre boxer engine. Mezger proposed moving the camshafts to the outside of the individual cylinders and heads in a single casting. The production version, dubbed 911 after a naming dispute with Peugeot, became rather popular.

Piech was impressed by Mezger’s thoroughness, ingenuity and work ethic. He proposed the 36-year-old Mezger as the new boss of Porsche’s Motorsport R&D department with a simple brief: design a powerplant that would win the 24 Hours of Le Mans. Porsche had been at La Sarthe since 1951, claiming a number of class wins and even chalking up a third overall in 1958. But the company had never campaigned a top class car that had a realistic chance of taking home the overall win. So close was their working relationship that it’s hard to unravel Piech and Mezger’s individual contributions to the 904, 906, 910, 907 and 908 racing programmes. What is often unappreciated was that Mezger’s remit was more than just an engine designer. He was in charge of overall concept.

Much changed in 1968, when an amendment to a technical regulation gave Porsche its chance. The rules stated a 3.0-litre capacity cap unless the 25 cars were built for homologation, whereupon a swept capacity of 5.0 litres was permitted. The sport’s governing body believed that nobody could design, build and market 5.0-litre cars in this relatively short timeframe. They hadn’t reckoned on Mezger, though. Working all hours, he oversaw the development of a 4.5-litre 180° V12 engine. The racing car, dubbed the 917, was unveiled at Geneva in March 1969. The following month, Piech presented inspectors with a row of 25 cars at Porsche’s HQ and invited them to drive any of them. They declined. But at Le Mans in 1969, the Group 4 racer didn’t win. Every 917 either crashed or broke. British privateer John Woolfe didn’t even complete a racing lap, tragically dying in the fast but frail 917 in a first-lap crash at the Maison Blanche kink. 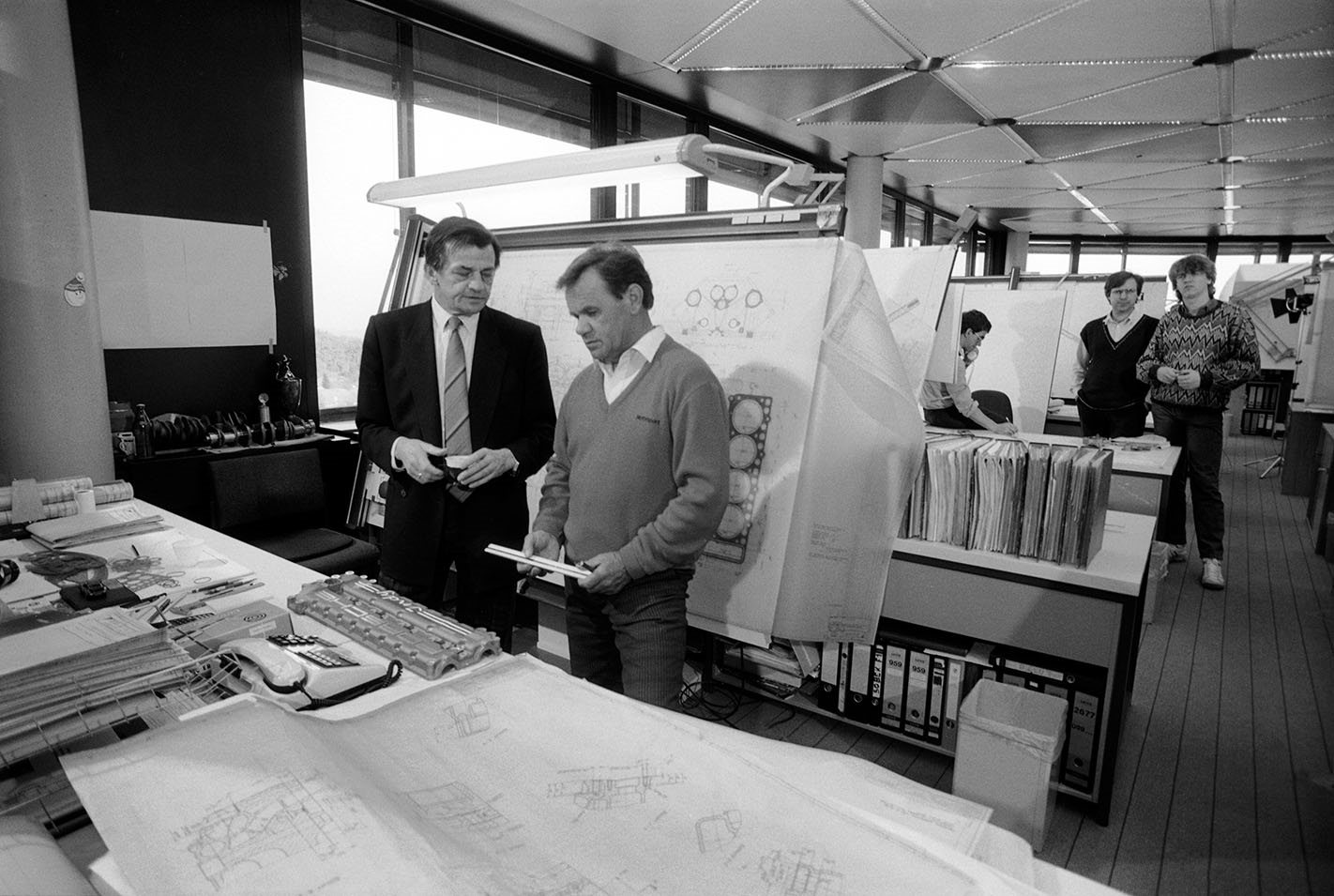 The 917 gamble could have bankrupted Porsche. Fortunately, the 917 was so much faster than the rest of the field that management kept the faith. That was duly rewarded the following year when Porsche scored a historic podium lockout, starting a run of success unlike anything the sport had ever witnessed. Mezger’s pioneering use of small turbochargers and bypass valving utterly changed the face of competition engine design. In its ultimate iteration, the forced-induction 180° V12 Mezger engine was good for 1200hp, and effectively killed the Can-Am series with its dominance. Unlike many manufacturers racing really did improve Porsche’s production car breed. The original 1975 Porsche 911 Turbo was a case in point.

“Without the 917, there wouldn’t have been a 911 Turbo,” noted Mezger. Adapting the turbocharging knowledge gleaned from the competition program for road use was a logical next step. The 911 Turbo is often seen as Ernst Fuhrmann’s baby, and it was indeed Fuhrmann that championed the concept, but it was Mezger who engineered the path to this vehicle.

Read next: Porsche 911 to get bigger engines in the future

The 911 RSR Turbo competition car from 1974 was the car that first gave the public the vision of a turbocharged 911. It featured a 2.14-litre six. Why 2.14 litres? Because forced induction racing motors at the time (outside of F1) had a 1.4x capacity multiplier applied to them. They had to be no larger than 2,142 cc in order to fall within the 3.0-litre capacity limit. The first turbocharged car at Le Mans, the RSR Turbo finished second in 1974. The RSR Turbo in many ways legitimised the 930, which then morphed into the 934 racer.

Mezger and Valentin Schaeffer studied the homologation rules and changed everything they could on the 930’s engine to create the Typ 930/71 engine for the 934. A horizontal fan was fitted along with bigger intake and exhaust valves and a more aggressive camshaft. The car’s shrink-wrapped bodywork precluded the fitment of an air-to-air intercooler, so had to compromise with air-to-water coolers on each bank of radiators mounted a long way aft of the front air dam. Was it effective? Consider this. In ‘74 the 911 RSR Turbo was a novelty on the grid at Le Mans. By 1976, thirteen of the sixteen cars taking the Group 4 start were 934s. Mezger’s engineering had completely changed the game. His 2.1-litre flat-six won Le Mans in ‘76 and ‘77 in the 936 Group 6 car and in ‘79, in 3.0-litre guise, took the chequered flag in the 935 Group 5 silhouette GT car. By any measure, it was a phenomenal run of success. 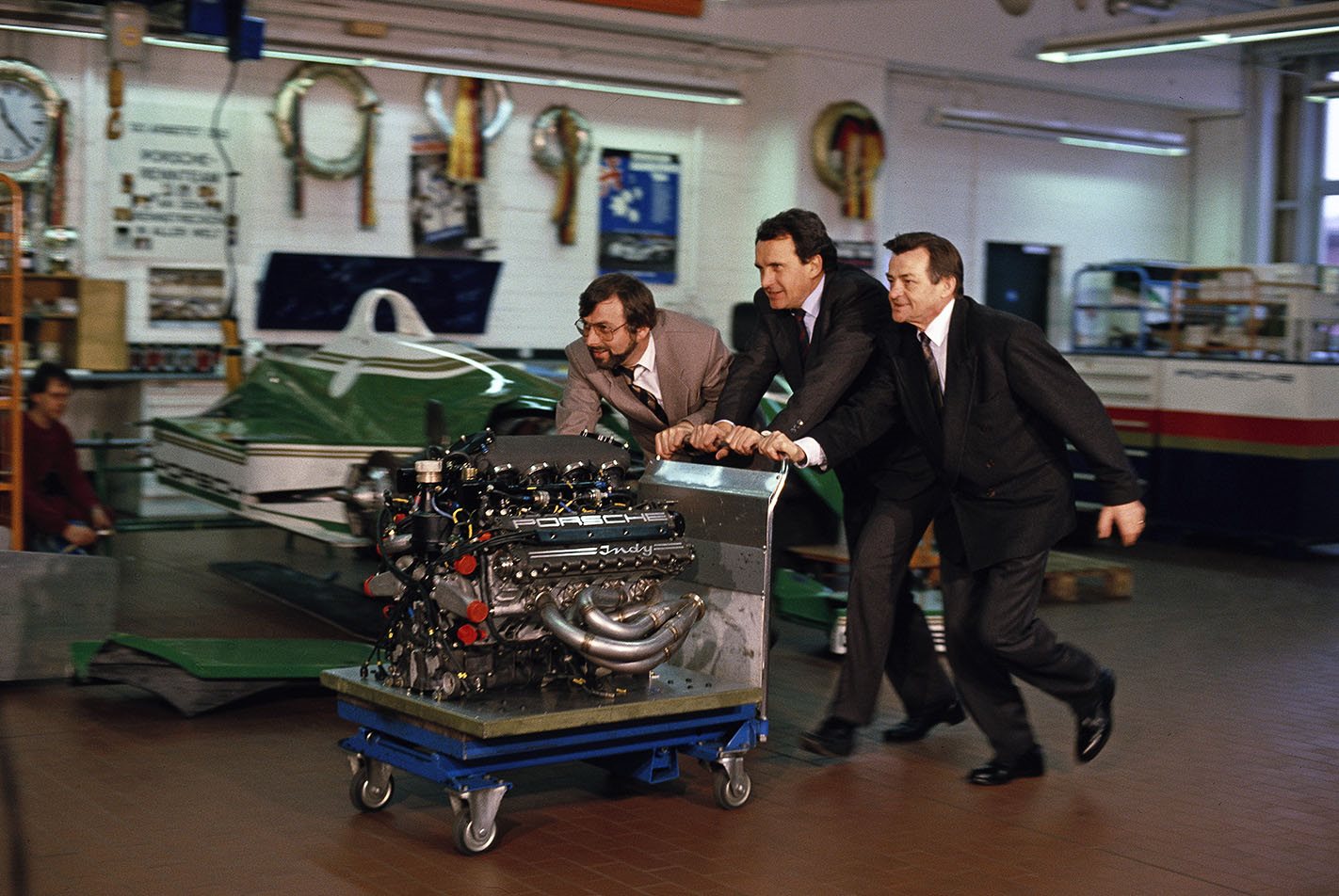 When asked what engine he’s most proud of, however, the answer doesn’t involve La Sarthe. His TAG-Porsche 90-degree V6, displacing just 1499cc and fitted to the 1984 McLaren MP4/2 was the engine. It wasn’t the most powerful engine in qualifying – that honour went to the awesome Brabham-BMW BT53 of Nelson Piquet who notched nine poles that year – but it made its power reliably and, equally importantly, economically.

Pair that with a great John Barnard-designed chassis, the first use of carbon brakes on the F1 grid and a stellar driver pairing of Niki Lauda and Alain Prost and it’s easy to see why commentator Clive James remarked that “anything as fast as the McLarens fell apart, anything as reliable finished later” during the official FIA review of the season. In only its second race, the McLarens of Lauda and Prost not only scored a 1-2, but were the only cars on the lead lap. The powerplant won the constructors’ championship in 1984 and 1985, eventually being outgunned in 1986 yet still coming second in the constructors’ and handing Alain Prost back-to-back drivers’ championship wins – the first since Jack Brabham in 1959-60.

Mezger would typically downplay his contribution. “All the parts we’ve used, already existed. They just haven’t been used for the right purposes. We’ve only rediscovered and reused the ideas,” he once said. Despite his pivotal part in the development of Porsche’s road cars, Mezger embodied Porsche’s values of competition improving the breed. “Ferry Porsche, with his visionary leadership of the company, his human qualities, dignity and great dedication, became my role model,” he said.”I wholeheartedly shared his philosophy of racing in order to build the best sports car for the road.”

Long before it became a sales slogan, Hans Mezger was never not racing. 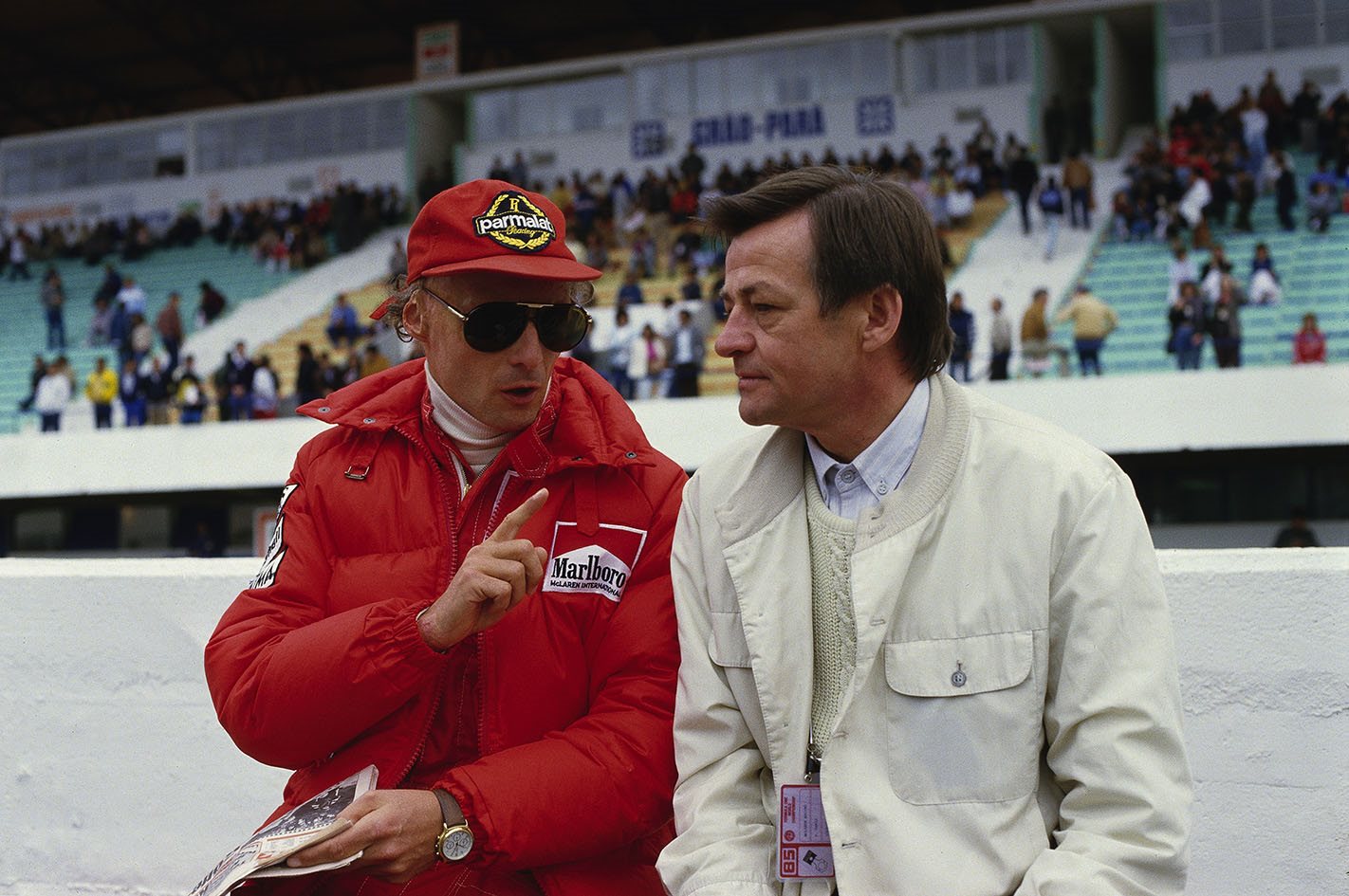 THE ONES THAT GOT AWAY

We’ll perhaps never see an engineer of Mezger’s like again, the engine design process being now significantly more collaborative.  But even Mezger suffered setbacks. His active aero solutions for the 917 were not effective in quelling rear-end lift and his design for exhaust-side air pumps for reducing the emissions of the 1968 US-market 911 also proved ineffective. Even the best don’t get things right 100 percent of the time. 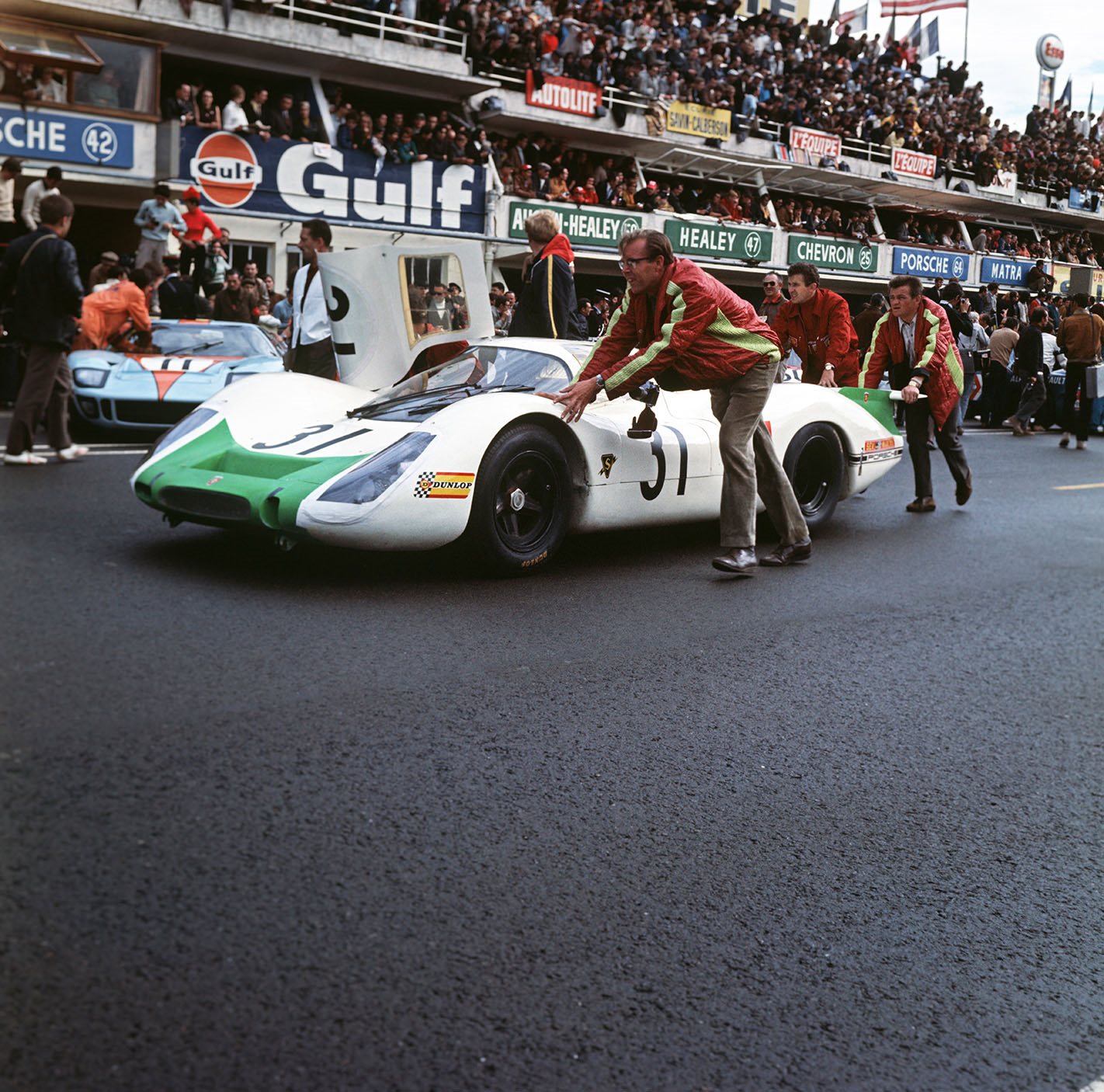