MAZDA has once again dropped a turbocharger into the 6 midsizer, but the company’s history with forced induction is surprisingly slim compared to some others – especially given Japanese automakers went a little turbo-mad in the late 1980s and 1990s, strapping snails to everything from tiny Kei cars to full-blood sports cars.

Even so, there have been more than a few memorable Mazdas with a huffer hanging off their exhaust manifolds over the years. Here are the most notable force-fed heroes from Hiroshima.

Mazda’s first turbocharged piston engine actually came in the previous BD-generation 323 (which was marketed as the Familia in Japan), but it was the BF and GB generations that demonstrated the company’s growing confidence in turbo tech. Pushing out 103kW and 187Nm from a 16-valve 1.6-litre, the Familia GT and GT-X’s outputs are nothing special by today’s standards, but were enough to inject some fun into what was otherwise a fairly sensible hatchback.

That made them part of the first breed of Japanese hot hatch, and in Familia GT-X turbo 4WD form they were also among the earliest examples of a turbocharged inline-four married to a grippy all-paw driveline. The Ford Sierra Cosworth wouldn’t switch to a 4WD layout until 1990, but Mazda had adopted that configuration as early as 1985. Focus RS and Golf R fans – you’ve got Mazda to thank for pioneering the four-pot turbo 4WD hot-hatch format.

Power was gradually stepped up over three generations of Familia, culminating in the Familia GT-R homologation special in 1992. That car boasted a motorsport-spec 1.8-litre cranking out 154kW, supported by a bigger turbo, a huge intercooler and wild bodywork.

Mazda’s second-gen NB MX-5 was no stranger to turbocharging. A Mazdaspeed Roadster version was rolled out in Japan in 2004 sporting a low-blow turbo which bumped up power to a handy 133kW, but there was another turbo MX-5 that came before it – and one that only we Aussies got to enjoy.

Developed locally by Mazda Australia’s Motorsport Division and assembled by Prodrive, the MX-5 SP (for Special Performance) added 215 unique parts to a standard MX-5 to juice it up to 150kW and 280Nm. Central to its newfound muscle was a water-cooled Garrett turbocharger sucking air through a carbonfibre airbox and sending 8psi of boost into a modified 1.8-litre four.

It’s the most iconic of Mazda’s sports cars, and also one of the most technologically complex: we are, of course, talking about the third-generation RX-7.

Its second-gen predecessor already went down the turbocharging route, but the FD RX-7 that followed it in 1992 went a step further by adding a second turbo into the mix and plumbing the two in an incredibly complex sequential arrangement governed by a veritable rat’s nest of vacuum piping and solenoids.

The result was an engine that spooled up just one turbo in the lower rpm range to improve boost response, while a secondary turbo kicked in as revs increased to provide more power in the top end. Peak power increased to 206kW in later-model RX-7s, a handy figure for a car that weighed around 1200kg empty, and enough to cement the last RX-7’s status as one of Japan’s most iconic sports cars.

What’s the best way to power a big, heavy luxury coupe? A turbocharged triple-rotor Wankel, of course. Mazda went a bit rotary mad for a while, and besides other oddball machines like a rotary-powered municipal bus (the legendary Parkway), Mazda decided that a big-capacity, torque-rich engine was the opposite of what its large n’ luxurious 90s-era Eunos Cosmo needed.

Instead, they put a rotary engine with approximately 2.0 litres of displacement and the same advanced sequential twin-turbo arrangement as the RX-7, rather than taking the easy route of shoving a V8 or V6 inside its shapely snout. Thanks to that turbo boost, however, the Cosmo three-rotor (there was also a two-rotor option) generated a very healthy 224kW and 407Nm with characteristic rotary smoothness. Impressive numbers, given it debuted in the early 1990s.

The rest of the world knew the Mazda Luce as the 929, but a badge wasn’t the only thing Mazda’s large sedan of the late 1980s kept confined to Japanese soil. While we got a three-litre V6 over here, in Japan the most interesting engine was a single-turbo two-rotor that was pinched from the FC-generation RX-7.

Mazda’s rotary-powered sedan wasn’t the only Luce to benefit from forced induction though – there was also a 2.0-litre V6 variant that deployed a turbo to help compensate for its modest displacement.

The spiritual descendant of the Familia GT-X was the Mazda 3 MPS, one of the most powerful hot hatches of its time. Churning out 190kW and 380Nm from a 2.3-litre inline four, the Mazda 3 MPS earned a fearsome reputation for vicious acceleration and savage torque-steer, and offered stellar performance at the time of its 2007 debut.

Mazda renewed the MPS badge for the third-generation 3, but without any changes to peak power – just fatter power and torque curves to bring more flexibility to its performance. Sadly, a successor never appeared in the fourth-gen model that followed, but there’s hope that Mazda will return to the fast hatch formula in the next iteration of its popular 3.

The only other modern Mazda besides the newly-updated 6 to be powered by a turbo powerplant, the CX-9 uses turbocharging to do things a little differently to the vast majority of its rivals.

While its core competitors like the Toyota Kluger and Hyundai Santa Fe use big-capacity V6s or turbo diesels, the CX-9 takes an unconventional approach by using a turbocharged 2.5-litre petrol inline four. The last time Mazda put a turbo four in an SUV – the CX-7 – it resulted in a family wagon that guzzled fuel like a road train, but Mazda carefully tuned the CX-9’s force-fed engine for low-rpm torque and economy, not screaming power.

The result is an SUV that’s more civilised and refined to drive than a diesel, yet doesn’t consume fuel like a high-displacement petrol V6. Two reasons behind why Wheels selected it as our Car Of The Year in 2017. 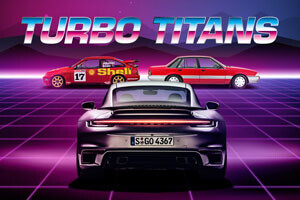