How to build an Audi R8

In the quest for lighter, faster and more powerful supercars, it’s not uncommon for manufacturers to go all-out on new engines, new materials and new technologies.

For their new supercar, however, the top brass at Audi decided that none of these were enough – the next R8 needed to be built in a completely new way, with new tools and in a brand new factory, and it needed to redefine ‘going all-out’.

As it happened, Audi had a few hundred million Euro lying around, so the big wigs got their wish: a brand new, state-of-the-art facility, right next to the Neckarsulm plant in Germany’s south. So, just three weeks after the last of the old R8s rolled off the line in the main Neckarsulm plant, the first of the new breed were already rolling out of a highly specialised site known as Böllinger Höfe. 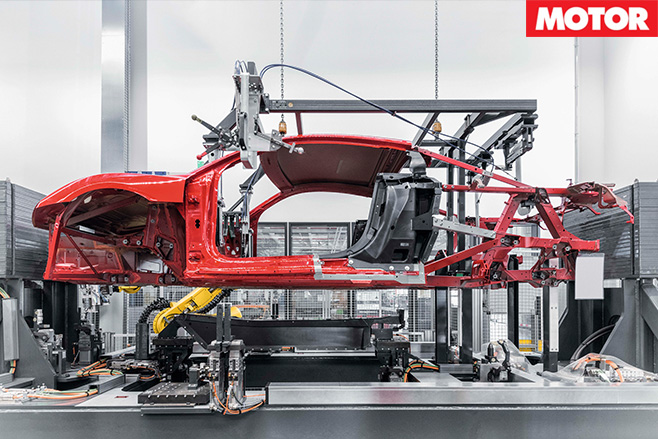 It’s easy to see why Audi might be after a bit of specialisation; on a slow day, the Neckarsulm factory down the road produces more than 800 cars, spread across the A4, A5, A6, A7 and A8. And that’s nothing compared to the Ingolstadt factory, where workers make 2000 Audis per day without breaking a sweat. When you compare these figures to the Höfe’s absolute maximum capacity of 40 cars per day, it’s fairly obvious what Audi’s bosses are trying to achieve.

The R8’s new home, then, is an incredibly focused facility, dedicated to making only the fastest, most savage and least sane cars possible under the watchful eye of parent company Audi. That’s right – at least technically speaking – Böllinger Höfe isn’t an Audi factory; it’s the domain of the specialists, and mentalists, of the Quattro GmbH skunkworks. Quattro is responsible for the R8 and everything with an RS badge, as well as turn-key racers ready for action in endurance events across the globe. 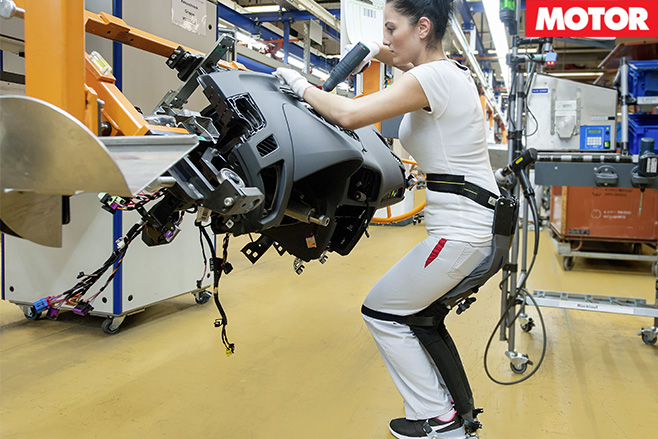 So, while Audi takes a typically German, anal-retentive approach to putting cars together, the new R8 – and its new factory – deserved something more. And, as if to rise to the challenge laid down by Quattro skunkworks, Audi has made sure the Böllinger Höfe facility – and the entire Neckarsulm plant – is replete with examples of that tricky grey area between brilliance and insanity.

Take, for instance, the carbonfibre exoskeletons Audi is trialling for its main assembly workers, which augment their fragile human forms – at least for the duration of a shift. The exosuit reaches from an employee’s hips down to their feet and comes with hydraulically adjustable, carbon-reinforced plastic struts to match different body sizes.

And, while Neckarsulm workers spend their shift pretending to be the ABC Warrior from Judge Dredd, workers down at the Höfe can indulge their inner Jetsons fantasy by having R8 bodies delivered by a robot butler. Yes, science fiction has found a home in the Audi factory. 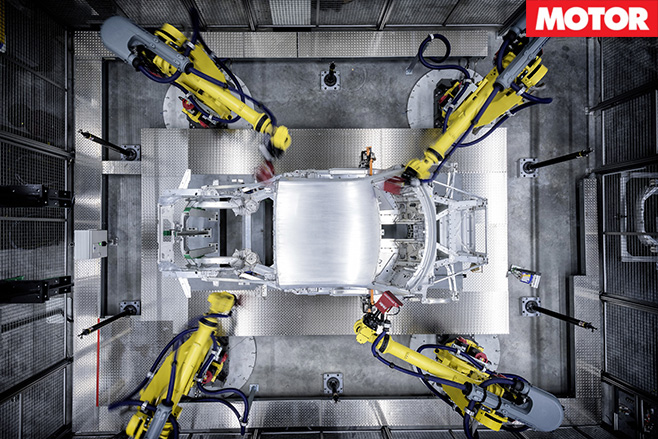 Of course, the official name of the robot butlers is predictably dull – Driverless Transport System – but it’s still a bona fide fleet of autonomous vehicles that ferry R8 frames from station to station. In essence, the droids replace a conventional production line, neatly sidestepping the drawbacks of the Model T method in the process.

If one of the bodyshells needs to be pulled out of the ‘line’ for special attention, it’s just a case of asking R2-D2 to take the chassis in question to where it’s needed. The production of the other shells is unaffected, because no actual line has to be paused while the chassis is redirected.

This multi-stage production method means the specialist hands at Quattro can build road-going R8s and full-blown racers on the same assembly line, regardless of the fact the two models only share about 50 per cent of their parts. 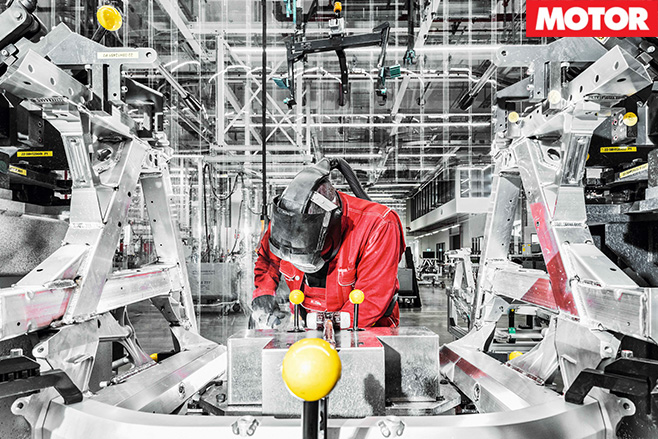 “The flexibility we gain through [our build process] helps us when it comes to building derivatives such as the R8 LMS GT3 racecar,” says Jochen Wagner, Head of Production at Quattro GmbH.

Coincidentally, Audi has already taken honours at the Daytona 24 Hour with a Böllinger-built R8 LMS. And, in early February 2016, the Phoenix Racing R8 LMS secured fourth spot at the Bathurst 12 Hour.

Production of the R8 itself is a maelstrom of science and sums. Audi says the final mixture for the chassis that underpins its new R8 is 70 per cent aluminium and 13 per cent carbonfibre-reinforced plastic (CFRP). The remaining 17 per cent is unexplained, so we’ll just assume it’s a subtle blend of rivets, unobtanium and Porsche-can-suck-it carbide. In any case, Audi claims the lightweight, multi-material frame helps its new R8 shed a full 50kg compared to its predecessor, so the mix must be fairly decent. 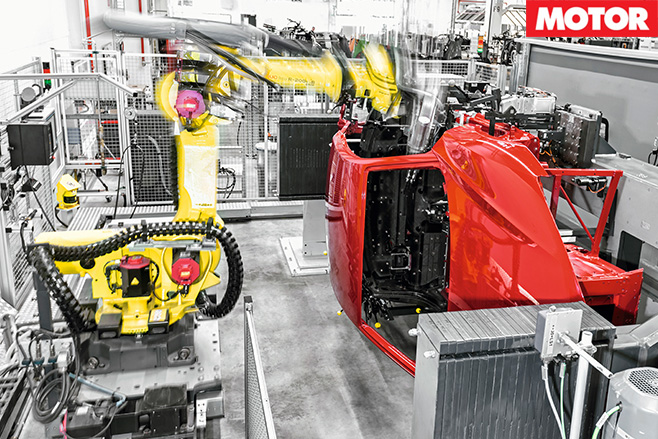 Audi trumpets that the R8 is still the product of human hands, but don’t think for a second that it’s in the same vein as low-volume cars from days gone by. Even though it’s a hand-built car, the finished R8 will still wear an Audi badge and sit at the top of the range – with a six-figure price tag – so it needs to be pretty well unimpeachable.

To make sure the R8 manages to be both hand-built and well-built, robots are still involved, but – crucially – only as a supporting act. Along the length of the build, robots and humans work in tandem; humans are responsible for 89 metres of delicate aluminium welding per car, but when it comes to the frame’s 1100-odd rivets and screws, the robots are brought in.

The same division of labour applies when it’s time to strengthen the aluminium frame with liberal swathes of CFRP. Robots cut the mounting points, dole out adhesive and fit certain pieces with literal laser precision. Then it’s time for those with hands and heartbeats to finish the job. 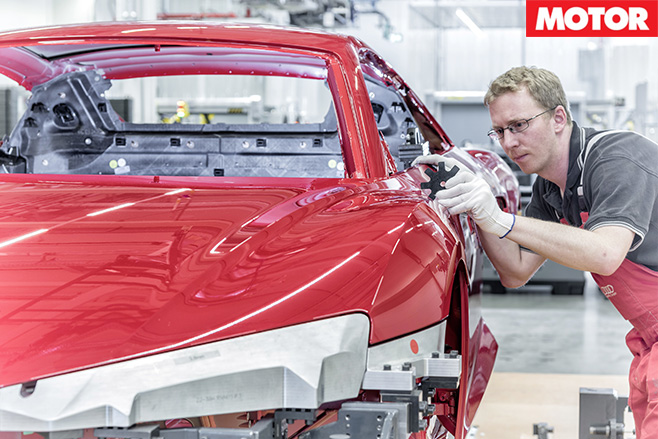 That said, there are some parts of the R8’s build that use human hands – and keen eyes – as a solo act. Eagle-eyed workers don gloves that wouldn’t be out of place in the Thriller music video and hand-inspect every square millimetre of aluminium to find and fix any microscopic flaws.

Panel gaps are measured to within fractions of a millimetre and quality testers dump 1200 litres of water on each R8 – just to make sure it’s watertight. Presumably, should someone ever get it wrong, they’d be banished from Böllinger and sent to make VW Jettas until they’ve served their penance.

Now, as hand-built as the R8 is, there are still places where it’s best for robots to take full control. A vat of electrified paint, for instance, is a good place for humans to avoid, but it’s where each R8 goes for a dip. The R8’s aluminium shell is negatively charged, then submerged in a giant tub of what basically amounts to positively charged undercoat, undergoing a process called electrophoretic deposition. 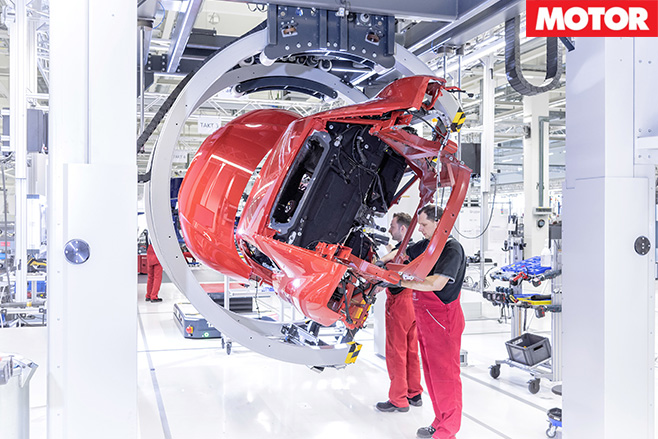 It’s all fairly complicated, but the practical upshot is that the paint doesn’t just coat the outside of the aluminium; it actually forms a chemical bond by sharing electrons. In essence, then, each R8 leaves the Höfe wearing an almost impenetrable suit of armour against corrosion and decay.

Another robots-only area is the oven, where each R8 goes through a double bake – once at a heady 200°C to cure the electro-painted aluminium and again at a less severe 80°C to sort out the CFRP and adhesive.

In a factory that’s as incredible as Böllinger Höfe, the most amazing bit is that everything – robot butlers, electrified paint and quality controllers with OCD and Michael Jackson’s gloves – is happening under one roof, making it the first time the R8 has enjoyed such exclusive treatment. 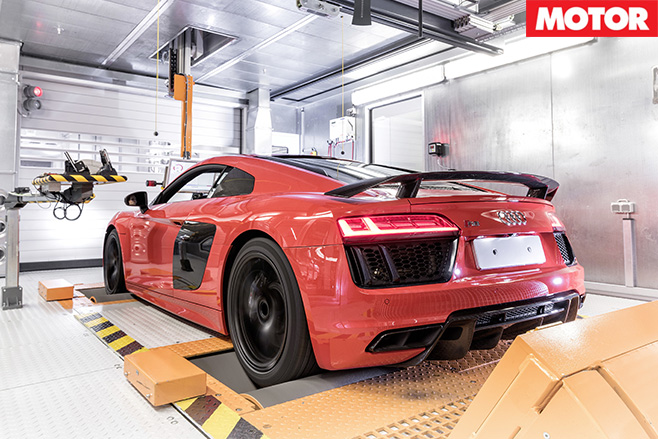 Standing in Audi’s Böllinger Höfe plant, in between the bionic workers and autonomous droids, it would be hard to avoid the impression that it’s the kind of place that could just as easily churn out space stations, robot armies and rail guns.

Luckily for us, everyone’s attention seems to be focused on just one thing: the new R8.

40
R8s built per day at Böllinger Höfe, compared to 2000 Audis at Ingolstadt

1200L
To make sure each R8 is watertight, testers dump a spa’s worth of H2O on each