For a company with such a storied competition heritage, Audi’s sporting car stock was at its nadir at the start of 2006. Here in Australia, the cupboard was virtually bare, with no RS models on sale and just one S-badged vehicle, the creaky B7-gen S4. The Mk1 TT was eight years old, its once-strident style statement more of a mumbled apology.

Audi executives proclaimed that terminal understeer was a defining brand characteristic that customers were comfortable with as the company unveiled a series of cars with engines hanging forward of the front axle. It looked for all the world as if the expertise to build sweet-handling road cars had been exiled from Ingolstadt. Yet this was a company that had just won five of the last six Le Mans 24 Hour races. There was clearly an extravagantly deep well of chassis engineering talent within the business. It just needed the right platform to come to the fore.

The precursor to the Audi R8 was Audi’s stunning Le Mans quattro concept car, which debuted at the 2003 Frankfurt Show. This had its roots in a diktat from the Audi Board of Management in October 2002 that was stark in its simplicity: “Develop a mid-engined supersports model.”

Fresh off the build of the Pikes Peak concept study for the Detroit Motor Show, and the Nuvolari GT show car for Geneva, this project, developed with the innocuous-sounding F03 (for Frankfurt ‘03) designation was a closely guarded secret. The entire build process was deemed too sensitive for the main production facilities in Ingolstadt, instead being squirrelled away in one of Audi’s pattern-making plants on the outskirts of the city. 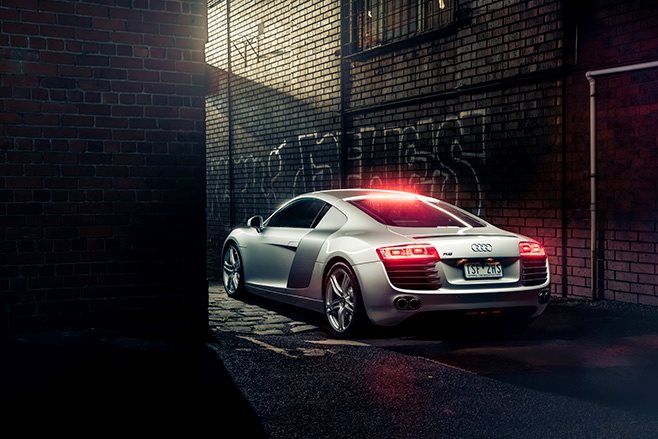 The development of the car was more akin to an old-school after-hours skunkworks project, with a close-knit team assembled by overall project manager Bernhard Voll (Technical) and comprising project managers Rüdiger Kiehn (Design), Frank Lamberty (Exterior Design) and Jens Sieber (Interior Design). Not only did virtually every new part need to be handbuilt from aluminium, but the car was to be a technological showpiece for inclusions such as LED lighting, carbonfibre reinforced outer skin, a digital cockpit display, magnetic ride suspension and the heart of the vehicle, a Lamborghini-derived 5.0-litre twin-turbo V10 engine with direct injection.

“We were able to take decisions quickly and directly, since we all worked in one large room,“ said Voll. “Every member of the team was normally available all the time and there were no multiple hierarchy levels to take into account.”

The exterior design freeze came in April 2003, whereupon the dimensions were scanned and digitised. Over the next months, the interior equipment, trim, paintwork and packaging issues were tackled, with the car being driven under its own steam for the first time for a photoshoot at Audi’s proving ground in Neustadt on August 9, a month ahead of the Frankfurt Show date. 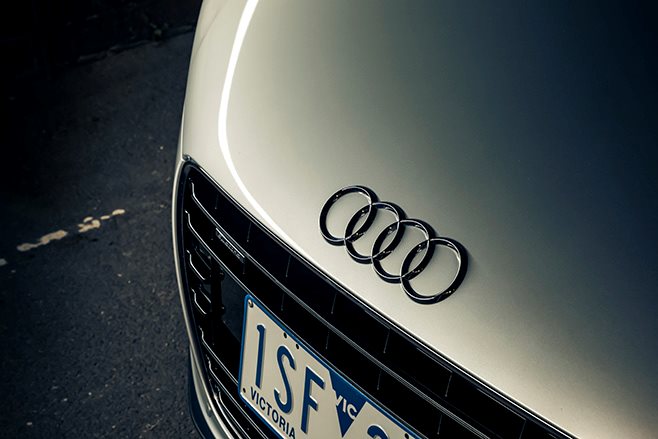 Of course, Audi had form turning radical show cars into production models, and those picking over the details of the Le Mans quattro concept quickly realised that its fundamental proportioning was that of a viable production car rather than something merely designed to garner attention on a show stand. We didn’t have to wait long to find out. Spy photographers snapped pics of the production mule of the R8, named in tribute to the all-conquering racecar, throughout 2005 and Audi duly whipped the hanky off on the show stand at Paris in 2006. It was a testament to the rightness of the Le Mans quattro concept that the production version looked little different.

The first European drives were scheduled in 2007, and I recall one British title deploying a road tester to lurk just off the drive route in a Porsche 997 Carrera. As they admitted to me that evening, they fully expected to give the Audi a good trouncing, but it didn’t work out that way. Quite the opposite, actually. In fact, 2007 will be remembered as the year that the 911 was humbled not once but twice, the Nissan R35 GT-R also managing to best the oft-invincible Porsche. Zuffenhausen learned a lesson here, with the 997.2 version of the 911 adopting adaptive dampers, direct injection, dual-clutch gearbox, LED lighting, better infotainment and finally fixing the intermediate shaft problem that had long plagued water-cooled 911s.

Audi Sport was nothing if not frank about the car’s genesis. “At first we thought we could take a lot from the [Lamborghini] Gallardo,” admitted Jens Steingraber, the head of Audi Sport projects. But the R8’s specific requirements meant that the aluminium chassis shares very little with the Italian car, with just five minor common parts, one of which is the rear bumper hanger. A new casting process also meant that the build process was simpler too. The original 1994 A8 had 60 pressure-cast nodes joining the frame together. A Gallardo has eight per side and the R8, with its 90mm longer wheelbase, has just four. 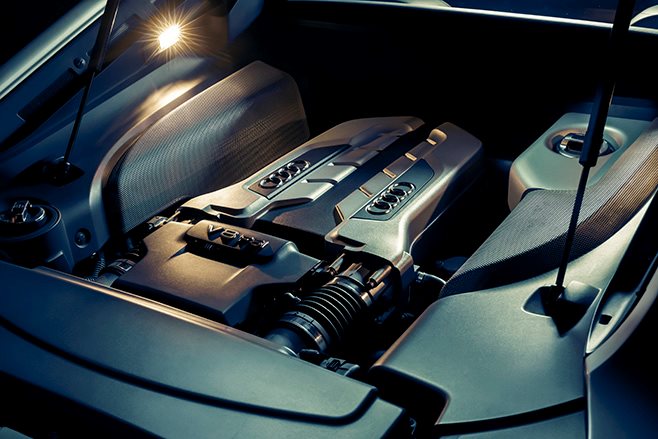 The 4.2-litre V8 was dry-sumped in this guise, with the 6.0-litre A8 V12 from 1997 being the only other Audi to use a similar oil-scavenging system. Making 309kW at a heady 7800rpm, breathing differed from that of the RS4 installation, with the R8 featuring a twin plenum induction and revised exhaust manifold. Aluminium double-wishbone suspension all round and a choice between a gated six-speed manual or the R tronic single-clutch robotised manual transmission further cemented the R8’s bona fides.

The Ricardo-developed R tronic ‘box was quicker than the manual, but some claim that it feels clumsy and dated compared to modern dual-clutches. Audi pondered fitting a dual-clutch to the R8 but realised that doing so would mean they’d need to extend the car’s wheelbase, which had several knock-on effects for the production timeline. In the end it was simpler to fit a modified version of the single-clutch ‘box seen in the Gallardo. Adapt to the system and drive it sympathetically, accept it’s of its time and it’s fine. Nevertheless, the manual transmission is preferred by most and values of used manuals are often in the realm of 20 percent higher than those of an equivalent R tronic.

HOW TO Buy a quattro Audi on any budget

Wheels’ first encounter with the R8 came when we sent Aaron Robinson to the US launch in Nevada. It was clear that this was something very different to the fare that Ingolstadt had been delivering.

“Corners are sucked in with flat, neutral handling and buttoned-down body control,” he said in our March 2007 issue. “Where a 911 is heaving and porpoising on its significantly shorter wheelbase, the R8 runs smoothly with buffed suspension strokes. Only serious on-off throttle stupidity will provoke the rear end to step out, and the car’s near-transparent stability control will slip it back in line again. Youcan turn that down to a lower setting for more sideways action, or shut it right off, but the R8 feels so naturally glued that you may never need it.” 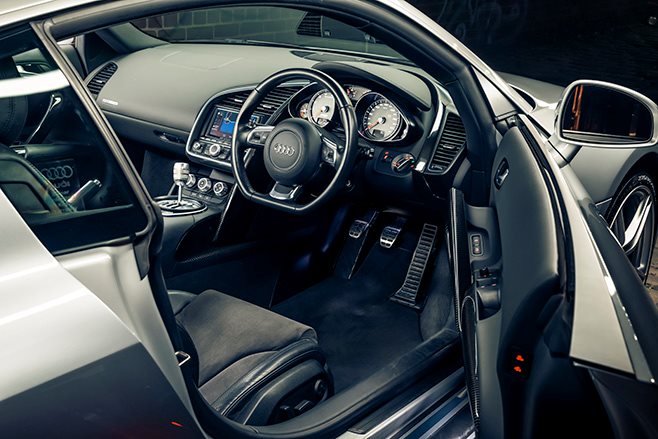 To tell the truth, the R8 still feels good today. Its uncanny ability to mop up surface imperfections without compromising its composure mid-corner still feel class competitive, and the interior still feels quality, albeit with dated sat nav and a few controls shared with more proletarian Audi models. The beady LED running lamps on the early cars betrays its age, while the optional magnetic ride adaptive dampers deliver very little in the way of difference between their normal and sport settings.

The R8 isn’t a particularly difficult vehicle to keep on top of as an ownership proposition either. Whether you prefer the original V8 or the shoutier 5.2-litre V10 introduced at the end of 2007 is largely a question of taste but, from a purely personal view, I believe the way to get the best of both worlds is to fit the sweeter eight-cylinder car with a slightly more strident exhaust. Milltek units are particularly popular. 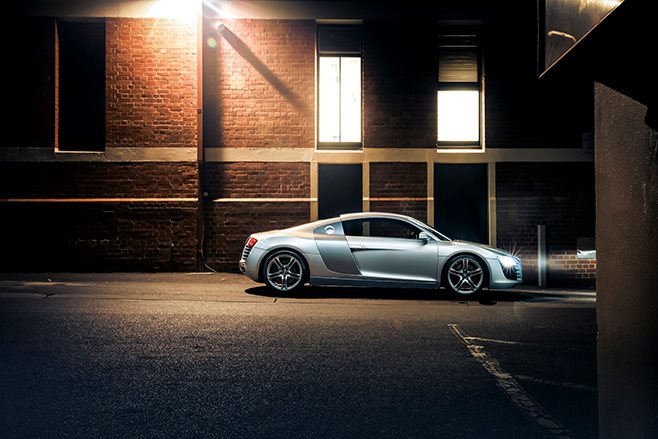 Look out for minor body damage as repairs to aluminium panels can be expensive. The V8 engine is generally tough and has far less of an appetite for oil than the V10 unit. Clutches last well on manual cars with many owners getting 60,000km from them but check for a high biting point or slippage when purchasing. R tronic clutches tend to be good for around 40,000km before replacement, with the later S tronic dual-clutch transmissions being a good deal hardier.

Above all, that first 4.2-litre R8 is a milestone car. It still feels quick enough and charismatic enough today, and it’s hard to see values eroding from here. The reasons it changed the sector for the better in 2007 hold up with equal validity now. Maybe more so. As we increasingly seek authenticity and tactility over simple brute torque and a deafening vacuum where involvement ought to reside, the original Audi R8 is that moment when all the stars aligned. Just try one. You’ll see.

Designers Frank Lamberty and Julian Hoenig originally intended the side blades to extend upwards above the body into twin fins. That would prove a step too far for Audi which was unconvinced by the practicality of the raised blades.

Unlike most concept cars which are then watered down for production, Audi sharpened the R8’s details. “If I were to put the R8 next to the original concept, I’d actually say it looks even better,” said then-design boss Walter de’ Silva. 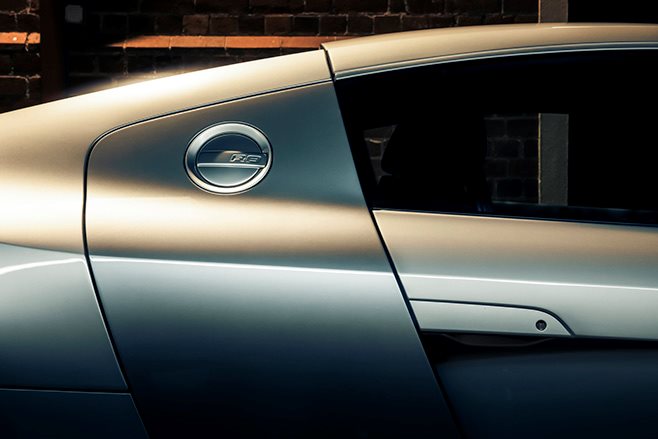