NSW Police have a new supercar dressed up in blue to use as a promo vehicle.

The Rose Bay Police Squad has announced it has added a BMW i8 – on loan from BMW Sydney – to its fleet as part of a public relations effort.

Don’t expect the German hybrid sportscar to be hauling away crims or issuing traffic tickets though. The plug-in hybrid sports car, though dressed in the full police livery, will be used to raise public engagement in Sydney’s northern suburbs.

“This BMW is the latest in a number of different vehicles that we have utilised at Rose Bay Local Area Command to raise awareness and engage with the community,” he said.

“It is a great community engagement tool that will be used at a number of police events to showcase the role police play in the community. 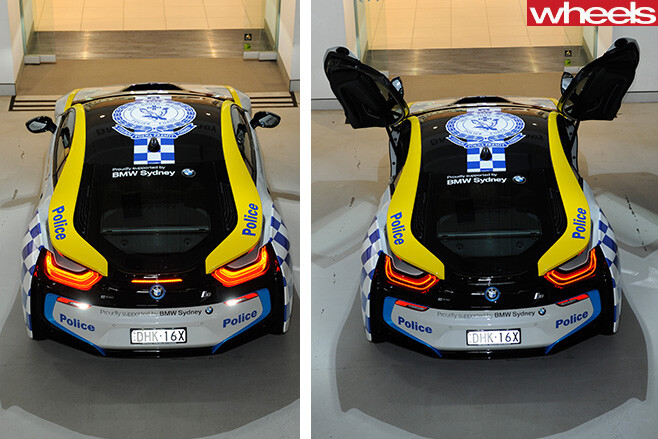 “Rose Bay LAC is very appreciative of the support provided by BMW Sydney and the Rose Bay Chamber of Commerce. This initiative is highly regarded and this vehicle, on loan to the Police Force at no expense to the tax payer, is another example of this support for community engagement.”

BMW Sydney is covering the costs of the ‘police’ i8, with dealer principal Simon Macedone saying it is part of an ongoing relationship.

“BMW Sydney has a long history in the Eastern Suburbs, which has been our home for the past 22 years and we’re extending that citizenship with the redevelopment of the BMW Sydney site,” he said.

“Our partnership with Rose Bay Police is the perfect way to demonstrate our commitment to the community, while raising awareness and engagement for the station.

“And to top it off we’re delighted to cement our place in the community with the handover of this incredible machine to the Rose Bay Police.

“The BMW i8 fits the bill perfectly with its high performance, athletic aesthetics and sensational efficiency,” he said.