Toyota Australia has lifted pricing for its facelifted 86 coupe to $30,790 plus on-road costs – just as Subaru has lowered entry to its nip-and-tucked BRZ near-twin model. Both score new LED headlights and tail-lights in addition to a restyled front-end and new alloy wheel design.

The BRZ continues to be a halfway-house between the 86 GT and 86 GTS, sharing the latter’s 17-inch alloy wheels and dual-zone climate control air-conditioning, but missing its nav and leather/Alcantara heated front seats.

The only difference is that Toyota persists with an outdated touchscreen unit where Subaru has switched to its own, markedly superior StarLink infotainment system; though sadly still sans navigation. Both marques use a smaller leather-wrapped steering wheel and colour trip computer display that now features lap timing, G-force and power/torque graph displays. For manual models only, both Toyota and Subaru also move from 147kW to 152kW and from 205Nm to 212Nm thanks mainly to a new aluminium intake manifold that remains a plastic unit in auto-equipped versions.

While the GT’s Yokohama 16-inch tyres and GTS’ 17-inch Michelin Primacy rubber remains, the facelifted 86 – and BRZ – are claimed to benefit from increased structural rigidity, allowing engineers to make the suspension softer without affecting handling agility. 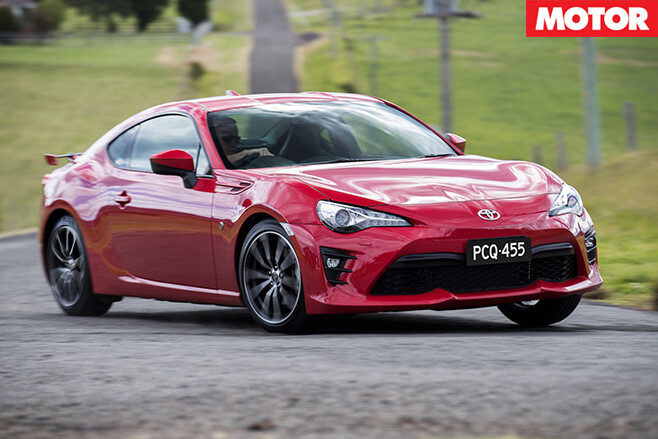 “These updates for the Toyota 86 are focused on improving the responsiveness, balance and handling of a car that is already rated in the same league as some legendary sports cars,” Toyota Australia sales and marketing executive director Tony Cramb said in a statement.

“It demonstrates the passion within Toyota for designing and engineering cars that look great and provide engaging driving dynamics – a passion that is attracting new, younger customers to the Toyota brand.”