FOLLOWING an unofficial early glimpse at a new more potent addition to the M2 line-up, BMW has confirmed its acclaimed baby of the M range will be joined by an even more powerful version dubbed the M2 Competition that gains an extra turbo and makes 302kW.

With its uprated engine, the Competition has more in common with the larger M3 and M4 twins and, while it can’t quite match the peak power of 317kW, it matches the pair for torque with a massive 550Nm.

Those figures represent an increase of 30kW and a beefy 85Nm over the standard M2, enough to chop a tenth from the M2’s zero to 100km/h acceleration for a new figure of 4.2 seconds when the dual-clutch automatic is bolted in. As with the M2, the Competition is available with a purist’s six-speed manual. For the self-serve option, a carbonfibre friction surface for the clutch replaces the more conventional Kevlar and fibreglass compounds used in regular clutch linings for lighter weight and improved shift control.

The manual includes rev-matching for seamless power delivery, although deft drivers can heel-toe with the feature deactivated when DSC is switched off.

If specified with the seven-speed M DCT auto, the M2 Competition gets steering-wheel paddles and three drive modes to alter shifting characteristics including aggressiveness and speed. Under the bonnet, the M2 Competition has even more sibling similarities with the M3 and M4 including a 1.5kg carbonfibre strut brace for a stiffer and more responsive front end, complemented by uprated ball joints and all forged aluminium suspension.

The cooling system with three radiators and additional anti-surge sump is also lifted from the M4 Competition for extra longevity under hard driving conditions.

At the tail end, a standard Active M Differential has been recalibrated for the extra power and torque, with its locking effect infinitely variable between 100 percent and zero lock, according to the drive mode and surface conditions. 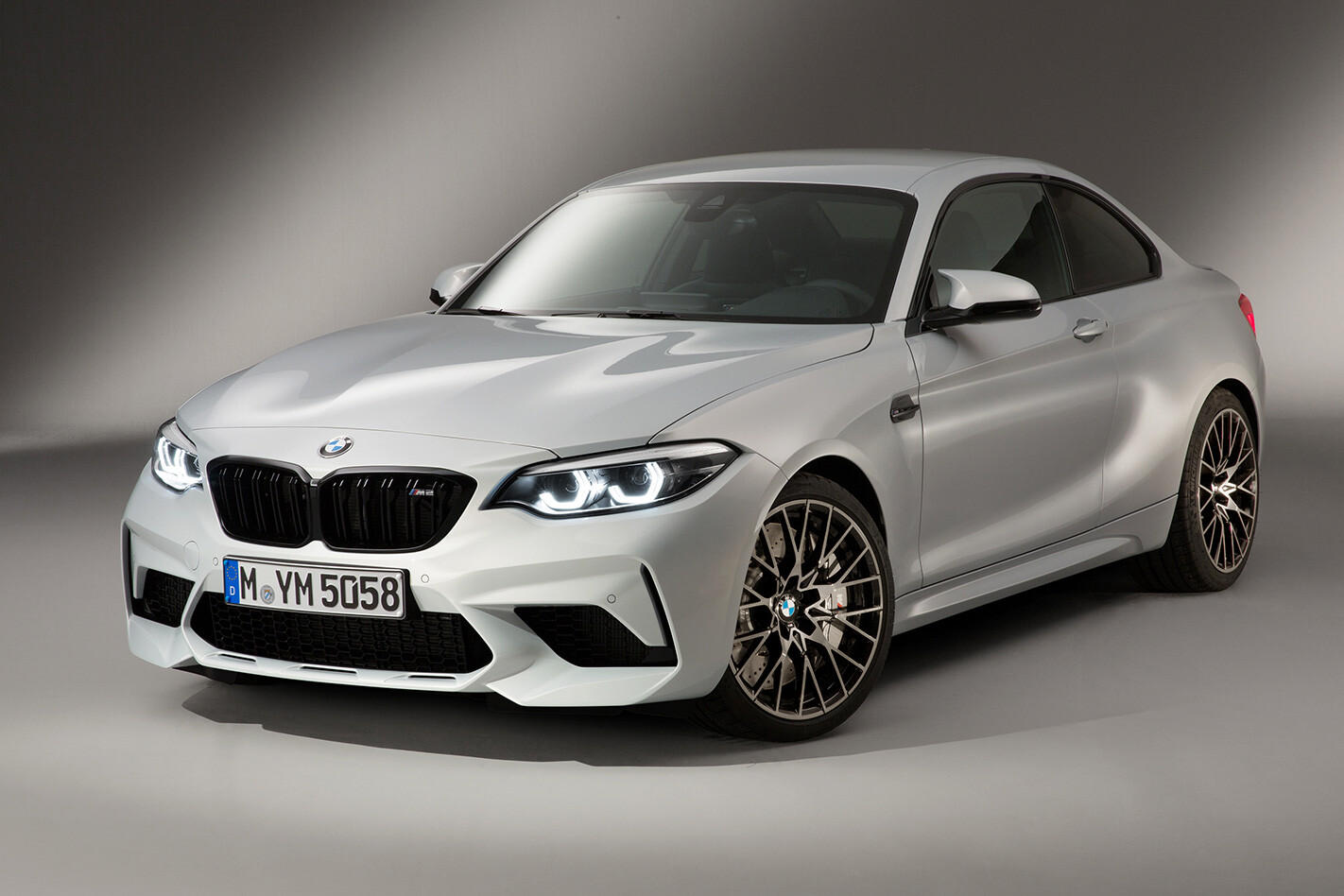 Brakes have also been upgraded for the Competition with 400mm rotors now looking after the front-end pinched by massive six-pot calipers finished in grey, with 380mm discs on the rear axle grabbed by four-pot calipers.

For a little extra exclusivity, the Competition can be optioned with a new forged 19-inch aluminium wheel package, which wears wider 245/35 rubber at the front and 265/35 tyres at the back.

Pinched from the executive big daddy of the M-family, the M2 Competition gains the pair of M1 and M2 hot-key switches from the M5’s steering wheel for quick access to pre-programmed vehicle DSC settings.

The Competition modifications are rounded out on the outside by a comprehensive exterior redesign including more aggressive front bumper with extra cooling capacity, smoked grille and ‘side gills’, double arm door mirrors and quad exhaust in black, which has a new active operation for a less apologetic sound when required.

On the inside, the Competition retains the same general layout of the M2 but adds to the sense of occasion with a choice of blue or orange perforated segments of the black leather and Alcantara seats, which incorporate an integrated headrest. 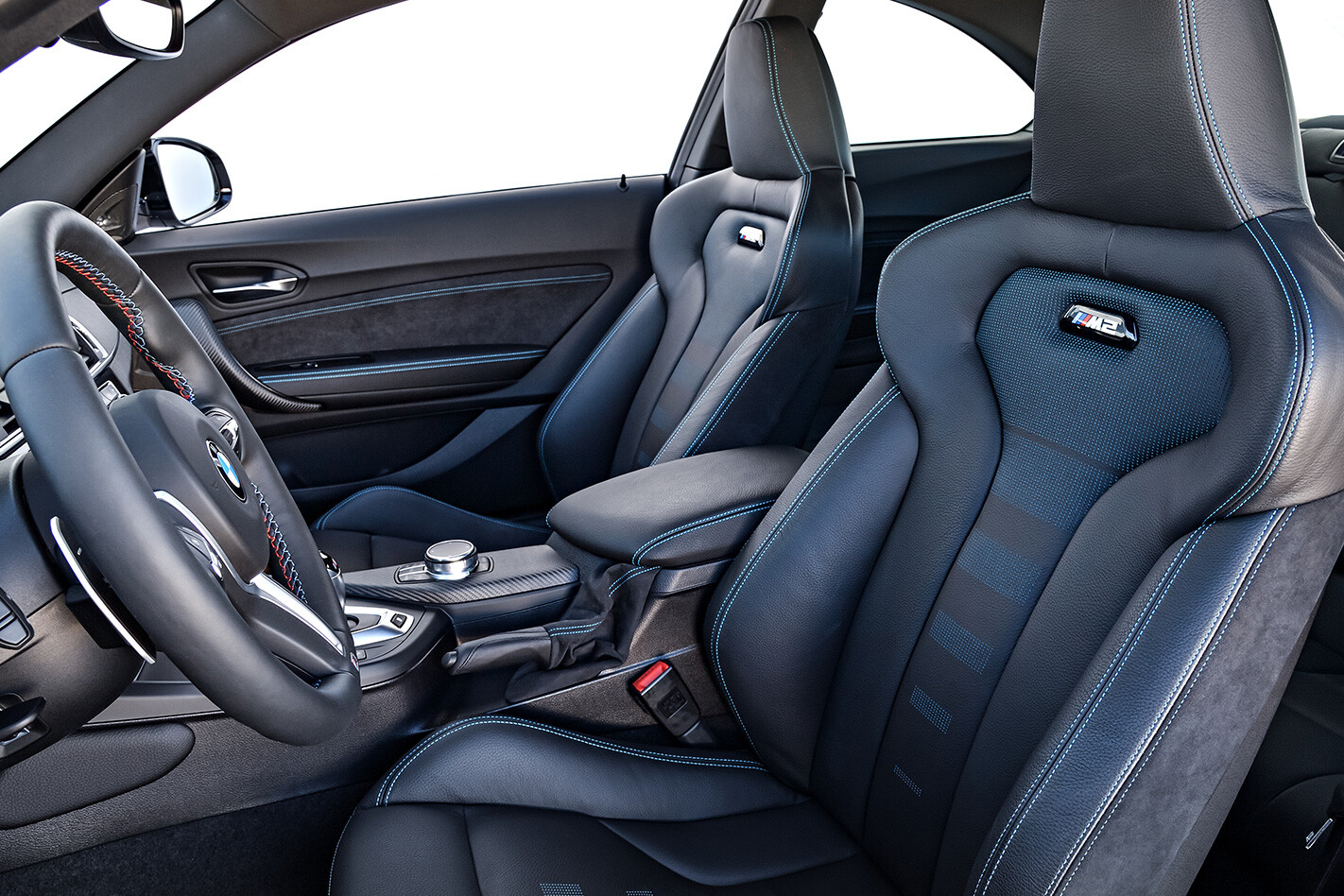 A scattering of M2 Competition branding on the door sills and welcome note in the dashboard central digital display completes the transformation.

Demand for the new addition is expected to be high, and BMW Australia is yet to release local allocation numbers, timing or how much hardcore M fans will be asked to pay over the cost of a $99,900 ‘regular’ M2. Expect those details to be announced shortly.