Stunning in Candy Apple Green, the GT500 VIN 001 is joining an old relative

The first 2020 Ford Mustang Shelby GT500 has been delivered to its owner, the chairman and CEO of Barrett-Jackson auctions, who paid USD $1.1 million for the pleasure of owning this car.

That money went to charity – specifically to JDRF, which aims to find a cure for type 1 diabetes – but Craig Jackson had another reason to own VIN 001 on top of the philanthropy.

A 1968 Mustang Shelby prototype known as Green Hornet resides in Jackson’s collection, so when given the opportunity to choose the colour of GT500 numero uno, some colour matching was in order.

“The independent rear suspension, four-wheel disc brakes and electronic fuel injection engineered on this car were pioneered by Carroll Shelby over 50 years ago.

“He tested and developed these same experimental components on his 1968 EXP500 prototype, Green Hornet, but they were not standard in a GT500 until 2020.

“It’s an incredible honour for Carolyn and me to be entrusted with these important vehicles and to have supported efforts to find a cure for juvenile diabetes.” 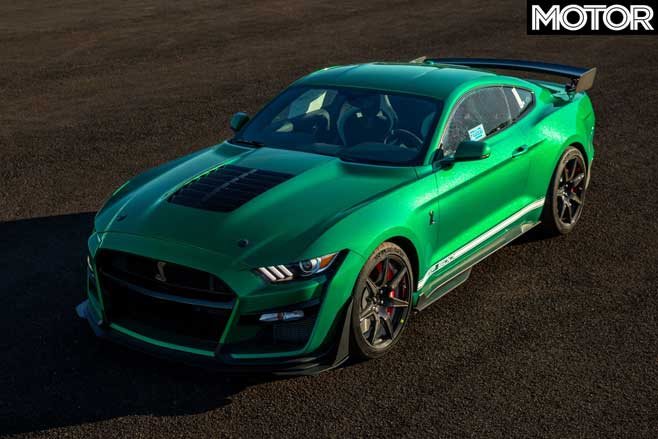 The GT500, Ford’s most powerful road-going car, is bestowed with a 567kW supercharged 5.2-litre V8, with 847Nm able to be managed by a 7-speed dual-clutch that’s able to shift in as little as 80 milliseconds.

Ford’s GT500 program engineer Ed Krenz called it the “most advanced Mustang ever,” a sentiment echoed by Steve Davis, president of Barrett-Jackson.

“Carroll Shelby’s racing technology and innovations, like those found on Little Red and Green Hornet, were far ahead of their time,” says Davis.

“These two incredibly unique vehicles led the way for some of the most important advancements in American performance and racing. The visionaries behind these advancements, like Carroll Shelby, not only impacted the cars of their generation, but have significantly influenced today’s performance vehicles.”

The Green Hornet and GT500 001 will be on display at the 2020 Barrett-Jackson Scottsdale auction, alongside a 1967 Shelby Mustang prototype called “Little Red.”