Spoiler alert: If you thought the 2020 Ford Mustang GT500 was just going to be a bigger, faster version of the Shelby GT350, you’re in for a surprise. It’s much more special than that. But you won’t realise just how unique until you get to drive it on a mixture of road, track and drag strip.

The last GT500 could top 200mph (320km/h) but had less grip than a vicar’s handshake and handling that was more wild and wayward than a herd of cats. Fun but not fast. 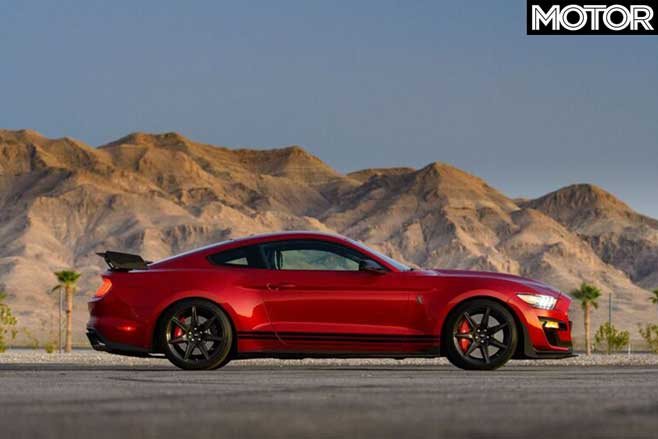 So there was a lot of work to be done to bring it back into line. The GT350 and then the 350R showed us what the new chassis can do. But then they also seduced us with their exotic flat-plane, rev-forever V8s and even a set of carbon wheels on the R.

So when we first saw the spec of the new GT500, it was a bit of a head-scratcher. Yes, it has the obligatory supercharger – and a suitably muscular 567kW to go with it – so it was usefully up on power over its little brothers. But it also has a seven-speed DCT gearbox, the first on any muscle car, instead of the 350’s six-speed manual. So it’s clearly a more road-focused machine. Right?

Wrong. What the Ford Performance team has managed to conjure up, in large part thanks to that DCT ’box, is a proper multi-modal muscle car that can change its character completely to suit whatever environment it’s playing in. Where the GT350 is a one-mode, always-on, deeply involving driver’s car, the GT500 can be dialed into several very different characters with the push of just a few buttons. 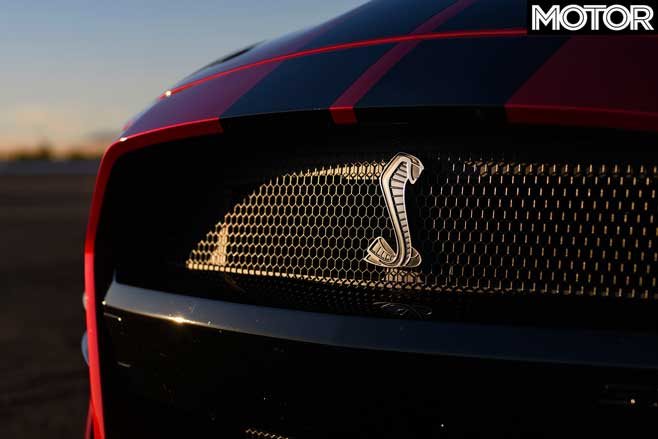 Want to do a lot of road work? No problem. Just back all the systems down to Normal mode, put the exhaust into quiet mode, and you find yourself in an almost spookily quiet, very comfortable car. The only bit it can’t do on the commute is economy. With a 60-litre tank and a high consumption rate, even at moderate speeds, you get electric car-style range anxiety if you attempt a journey of over 300 kays.

It was so quiet and composed on the road – the first part of our test route – we were worried that Ford had oversanitised the GT500. But we needn’t have worried. All it took was a few laps around the Las Vegas Motor Speedway to kill off any fears. With the chassis set in Track mode, the GT500 turns from being a thirsty commuter into a ready-to-race missile. The calm road manners translate into a neutral-handling car that can be pushed front and rear at will. 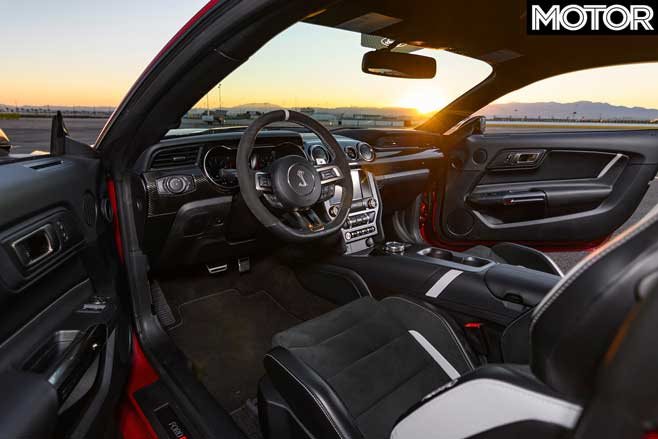 All sense of size and weight falls away the faster you go, the mass of the car feeling like it has been sucked from the edges into a ball just under the driver’s seat. Throttle response is instant and millimeter-linear, steering feel accurate so you can back in and steer out with minimal input from the helm. You can overwhelm the rears and go sideways if you flatten the throttle before fully straight, but the car doesn’t lose all its composure and keeps moving forward.

The front-end grip is nothing shy of extraordinary. In Track Pack spec – we’ll get to the details of that in a minute – the GT500 still weighs almost 1900kg. You just should not be able to lean as hard as you can on a front axle and not expect it to understeer you into the outer kerbs. Yet here we are in the 500 asking it to turn and slow from deep into three figures – again and again – and it’s just doing it. The word impressive just doesn’t do it justice. 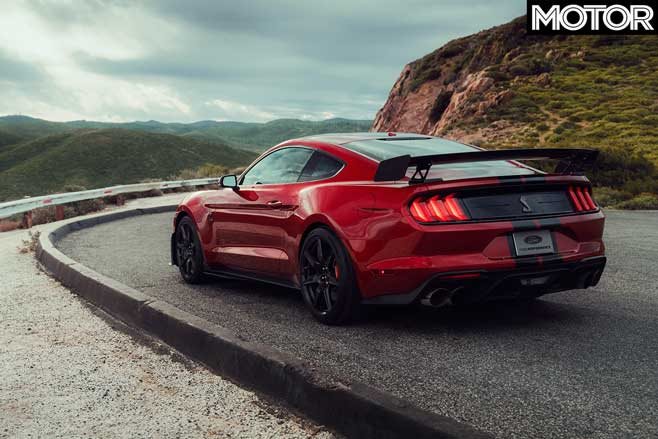 It’s the same story at the drag strip. Where you had to possess snake-like reactions and ballet-like throttle control in the previous GT500 to get anything approaching a respectable quarter-mile time, the new car makes it simple.

Summon Drag mode in the dash and the GT goes through another transformation. The rear shocks get slightly softer, to allow for better weight transfer on launch, and you get a whole sub-screen of drag apps to play with.

You set the launch rpm, press a button – then release and press again – to engage Line Lock, do your pre-launch burnout, then roll to the line, hold the brake, put the throttle to the floor, wait for the lights and bam! you’re gone. Just under 11 seconds later you rip through the 1320 at over 210km/h. Or even more than that if you are in the base-spec car, which doesn’t have the drag of the Track Pack aero. 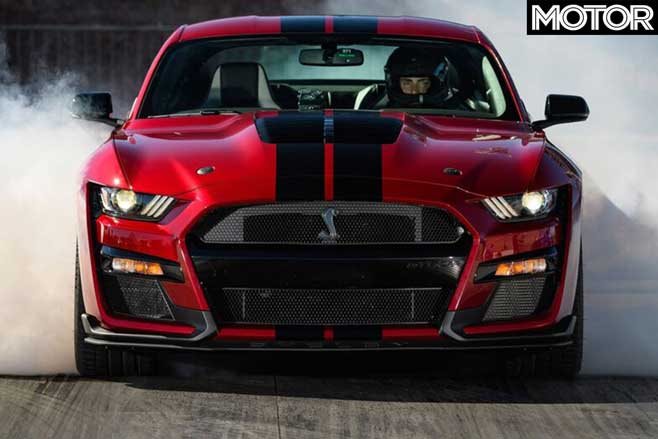 How does it achieve all this? The refreshingly simple spec sheet tells all. The 5.2-litre cross plane crank engine and Tremec seven-speed DCT transmission remain the same, irrespective of whichever pack you have or have not chosen, but the GT500 is available with two optional exterior packages.

The base car, which is anything but basic, runs on 20-inch wheels sporting a set of Michelin 4S tyres. A 3.73 Torsen limited slip, diff cooler and Magneride dampers are standard, along with a set of 394mm six-piston front and 381mm four-piston rear Brembo brakes. The discs are available only in steel, Ford wanting to keep owner running costs down.

Outside, other than some styling that is so aggressive it’ll give you a black eye just looking at it – that Mako shark grille flows 50 per cent more air than the 350 to cool the higher output mechanicals – standard equipment includes a rear spoiler and diffuser plus a dual exhaust with quad tips and clever valves. 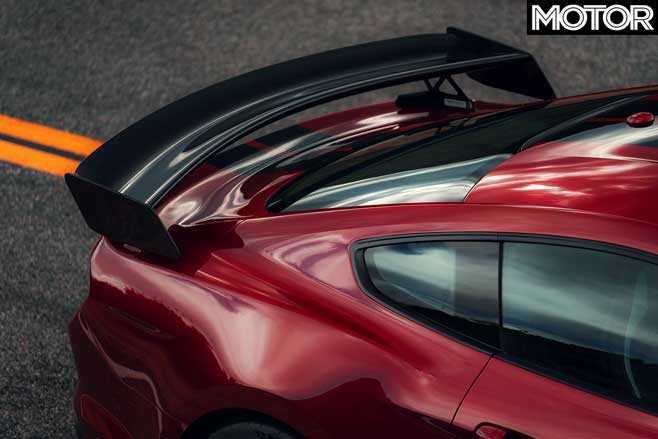 Inside, you get a familiar Mustang dash complete with everything from the 12-inch digital instrument cluster, which rearranges itself according to which mode has been selected, and a set of leather-trimmed Miko suede sports seats.

Add the Handling Pack and you get a Gurney flap for the rear spoiler plus a set of splitter wickers for the front.

But where it gets really interesting is the Track Pack. This US$18,500 option includes a set of 20-inch carbonfibre wheels with a set of Michelin Cup Sport 2s, deletes the rear seat, adds a carbonfibre GT4 rear wing and adjustable strut top mounts, then swaps out the front seats for a set of Recaros. To really eke out every last bit of value from your GT500, this is a necessary option. Unlike the US$10,000 painted stripes, which should be avoided. But whatever spec you get, you will not be disappointed. 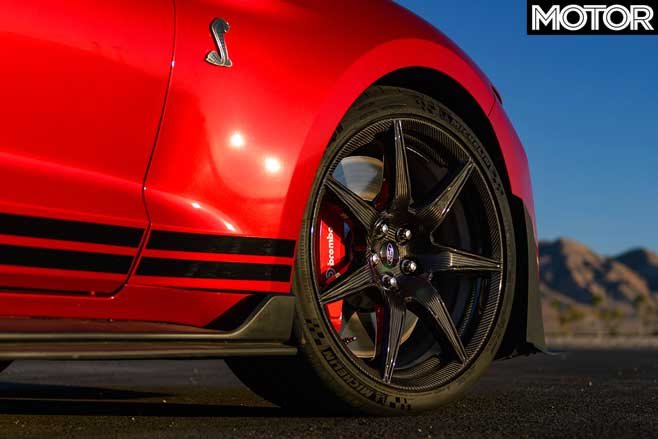 The three-pedal GT350R might still be the more involving car, but in the real world of commuting and mobile phones, the GT500 is the more usable. And the more you use it – on road, track or strip – the more you will enjoy this special car.

It’s not coming to Australia, but that’s why we’re getting the Mustang R-Spec. 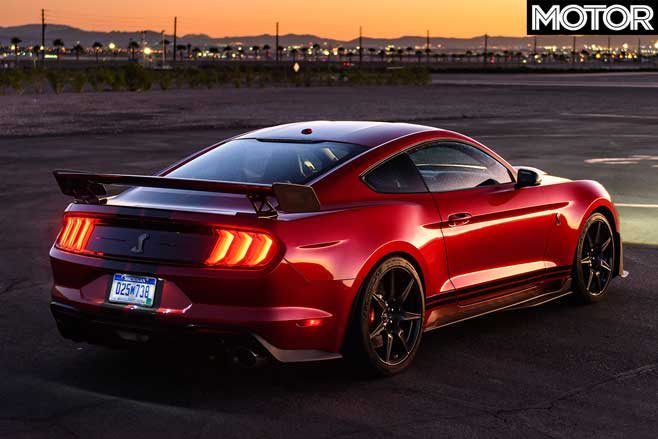 Like: Chassis can handle every bit of the power; aggressive looks do not deceive
Dislike: Fuel tank is too small; painted stripes for $10K are an unnecessary rip-off 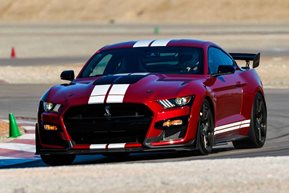 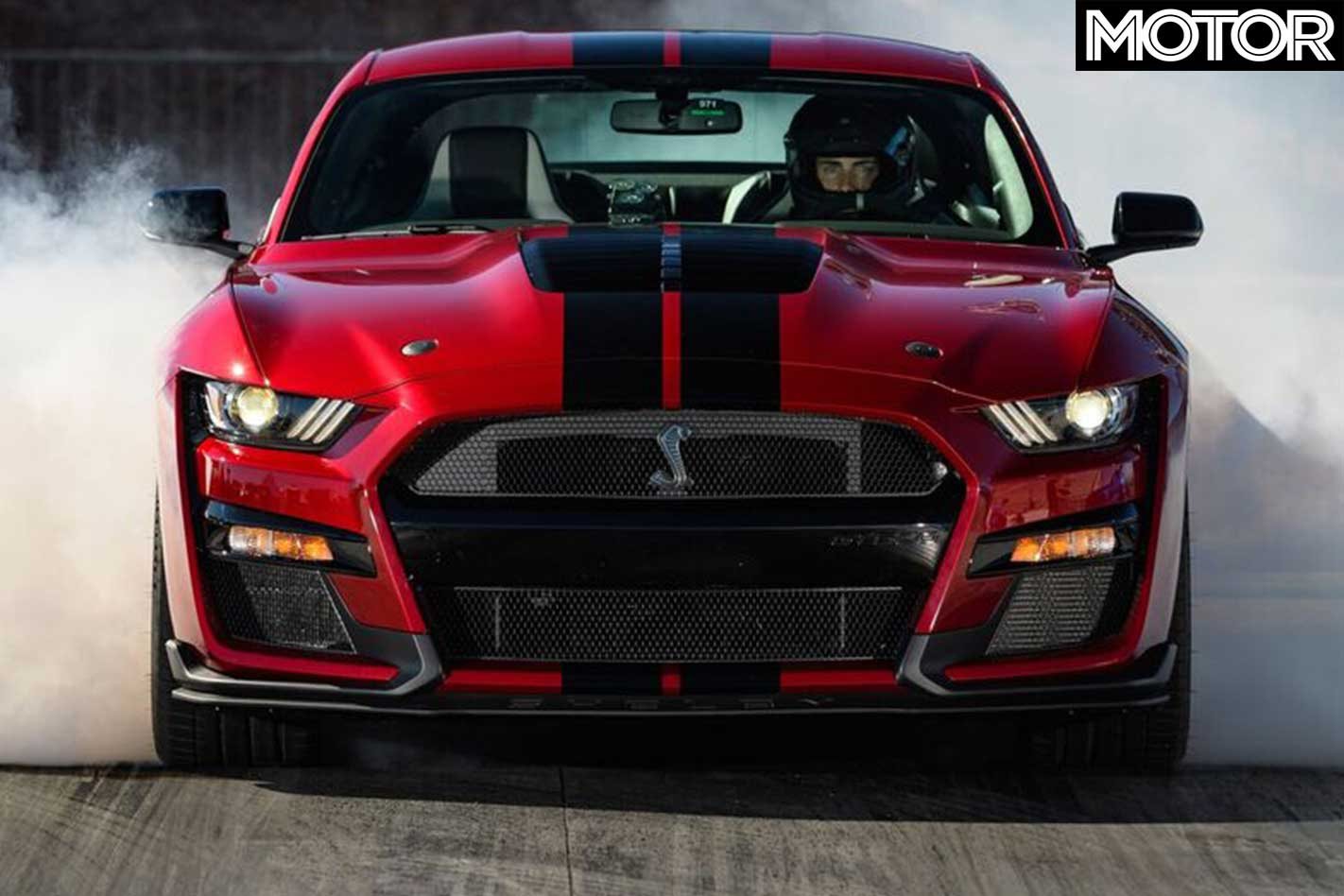 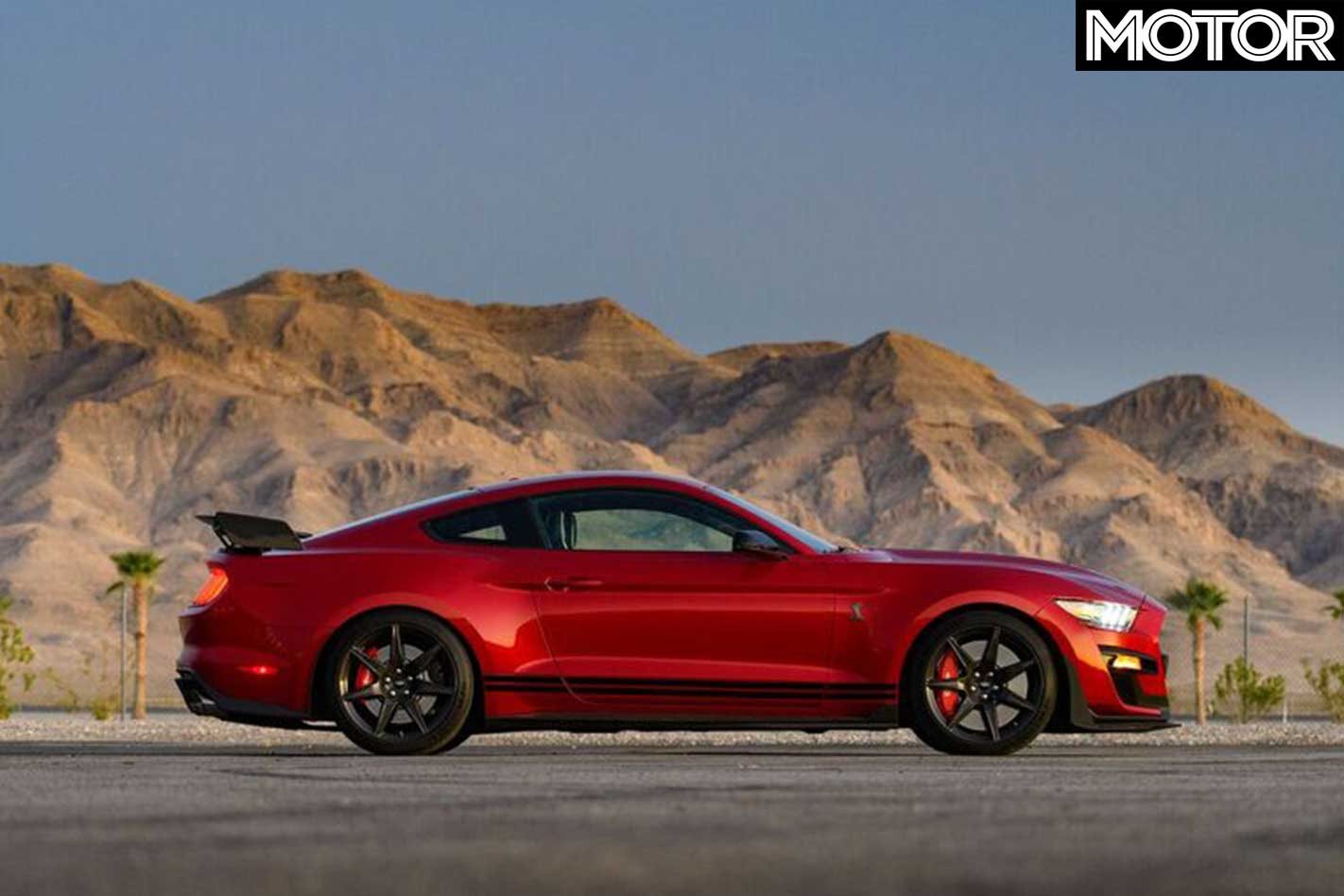 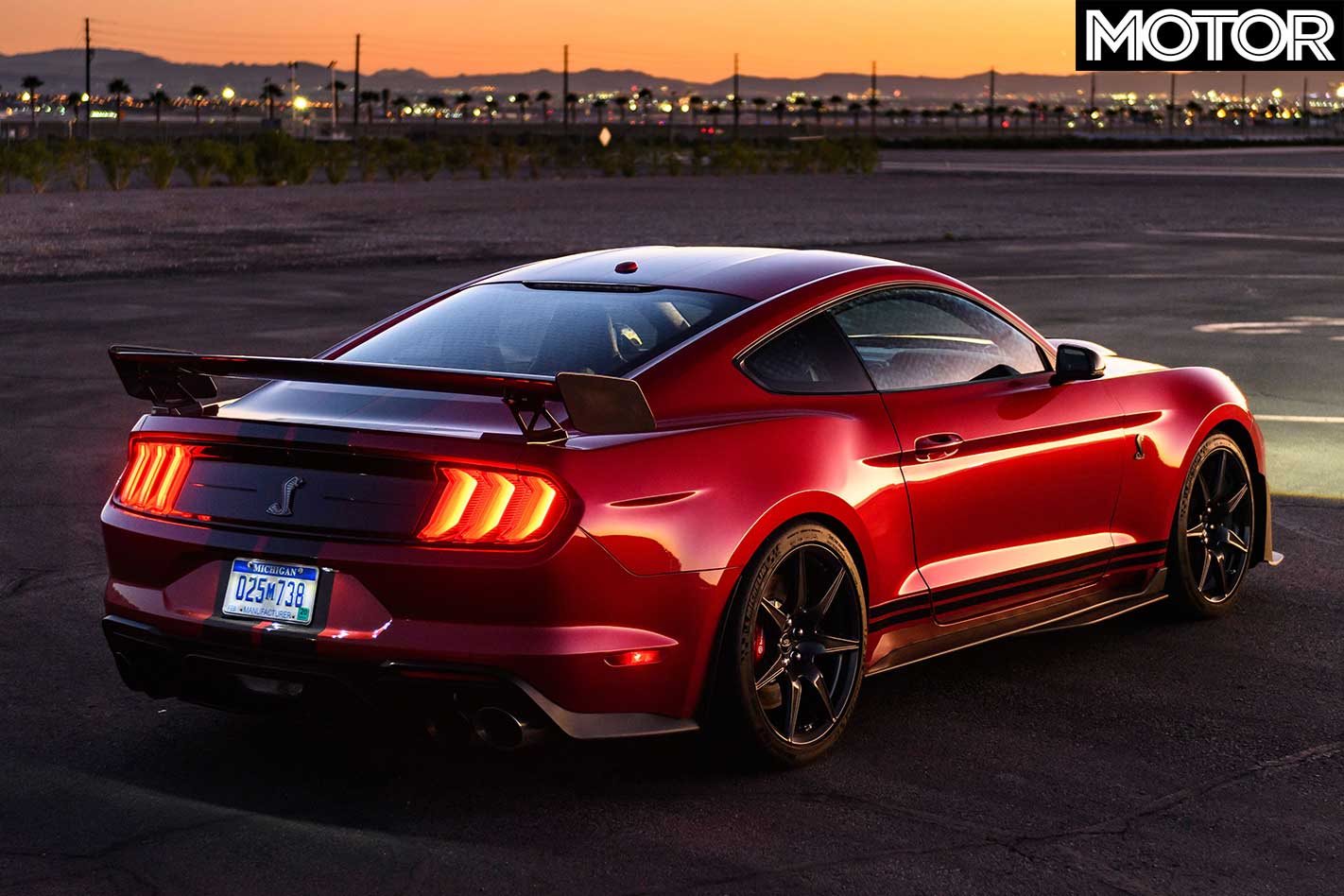 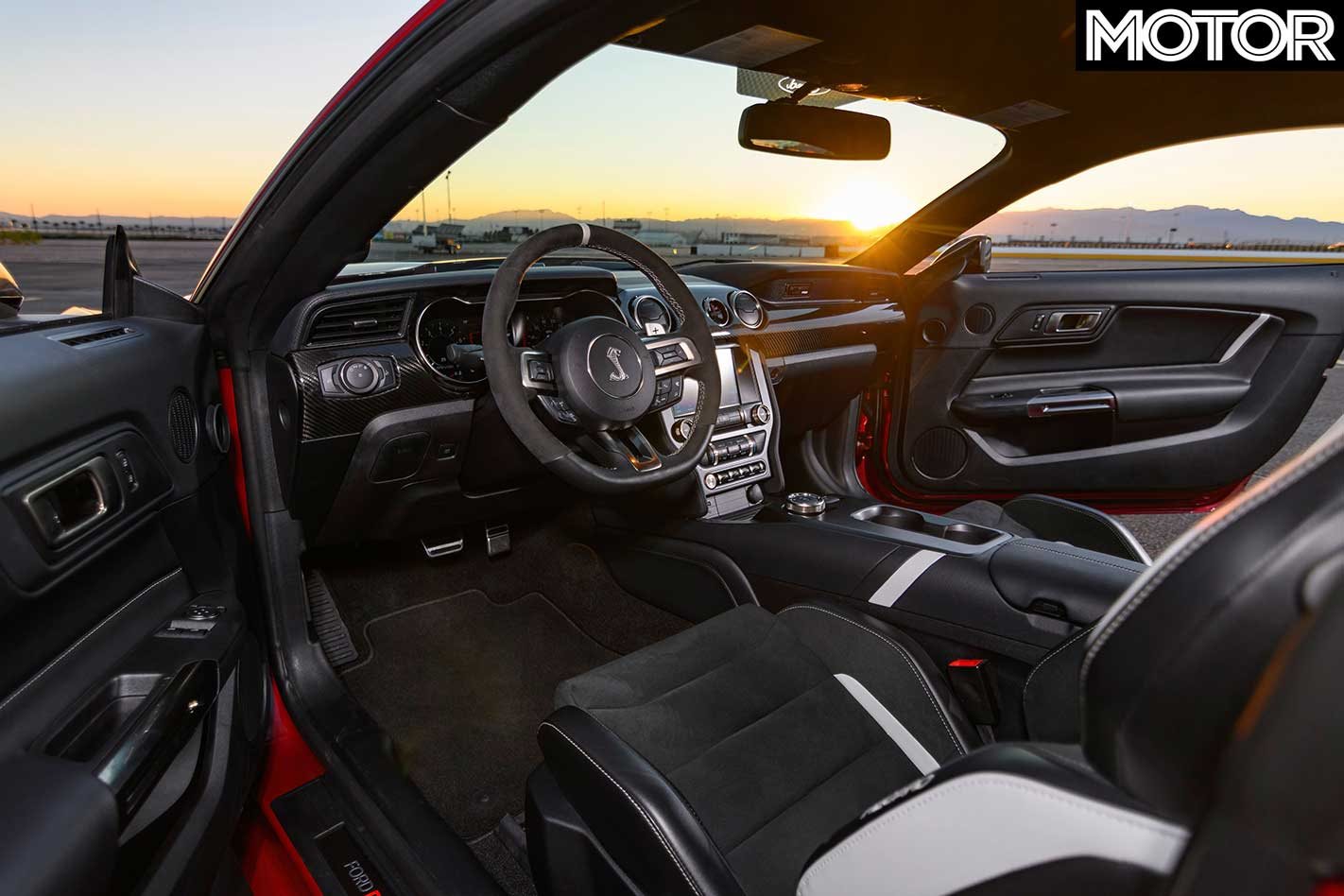 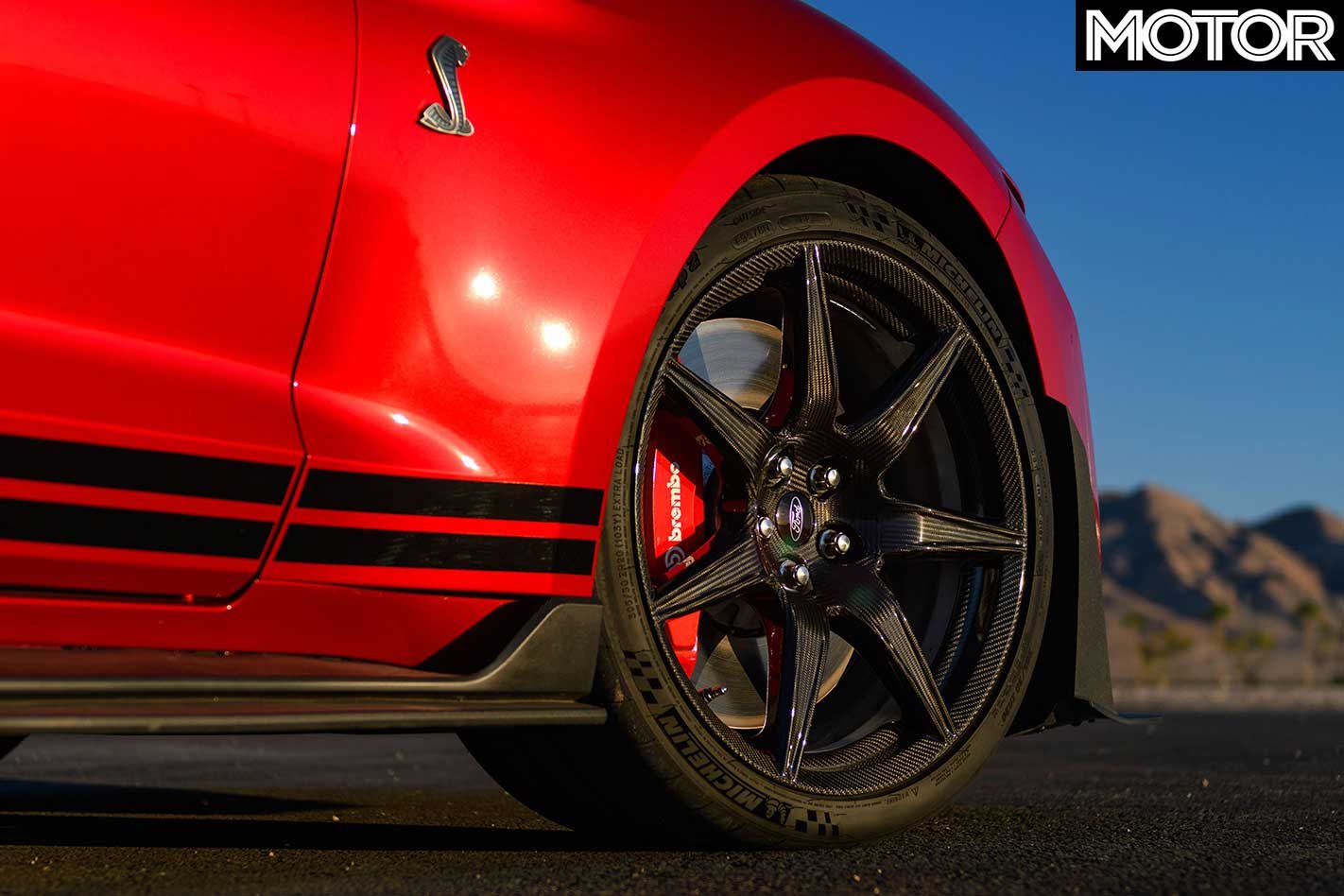