Barrett-Jackson’s Scottsdale auction produced a few interesting highlights, including the sale of the Ferris Bueller’s Day Off Ferrari California and a collection of Paul Walker’s personal vehicles, but the biggest sale comes thanks to the first production Chevrolet C8 Corvette Stingray.

But the car that rolled across the block was a pre-production car, present as a representation of the car Hendrick will receive.

MORE: Aussie-bound C8 Corvette set to be cheaper than expected

“The car shown and crossing the auction block is representative of the actual vehicle the winning bidder will receive, which will be a black-on-black Corvette 3LT loaded with every available option, scheduled to be built during the first quarter of 2020,” Barrett-Jackson said of the car before its sale.

“The entire hammer price of this sale will benefit Detroit Children’s Fund - a non-profit organization that makes targeted investments to grow the number of quality schools in Detroit.” 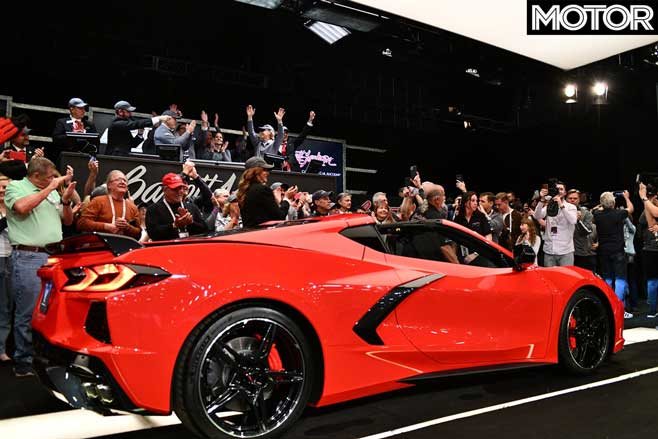 General Motors CEO Mary Barra was also on stage to oversee the sale of the first production mid-engine ‘Vette, saying the men and women of GM have, with this car, taken the Corvette “to the next level.”

Within 10 seconds of bidding beginning, the price had shot up from USD$200K to $1 million, becoming double that another 10 seconds later. One minute in, and the sale price had been reached before auctioneers gave other bidders an extra minute to jump in.