STEP aside F-Type R, there is a new king of the pride, with Jaguar unveiling the most powerful road-going car in its history.

Packing a supercharged 5.0-litre V8, the XE SV Project 8 sends a stonking 441kW to all four wheels via a tuned eight-speed auto.

The cost? Jaguar lists the official price as £149,995 (A$253,451) but there’s precious little chance the likes of us will get our hands on one as production is limited to just 300 units, and that list is already chock-full of pre-approved customers. And every Project 8 has its steering wheel fitted on the left. 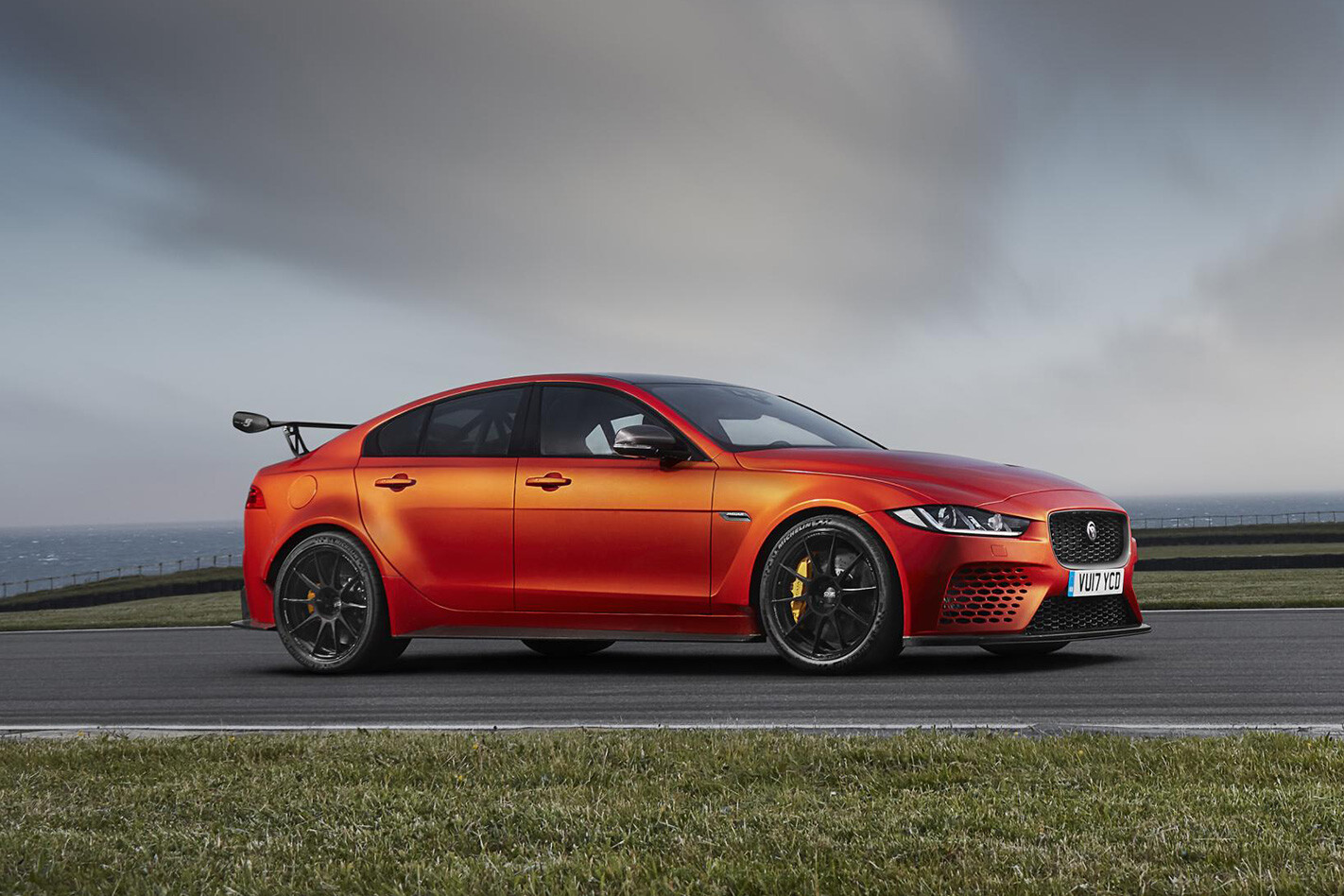 Jaguar has given the Project 8 lashings of carbon-fibre, yet it still tips the scales at 1745kg, a couple of hundred kilos up on a regular XE.

But that is just about the only metric where a standard car will better the Project 8, with the angriest XE available springing to 60mph (97km/h) in 3.3 seconds. That is supercar-beating territory from a four-door sedan. It’s been engineered by the Special Vehicle Operations team to top 200mph, (322km/h), making it a huge 72km/h faster at the top end than the next-fastest XE production model. There is a 110mm wider rear axle, and the front headlights have been shifted forward by 14mm to accommodate the focused  Michelin Pilot Sport Cup 2 rubber. These ought to transform all that power into motion without (too much) tyre smoke.

Whopping 400mm carbon-ceramic front discs provide the whoah to all that go, and Edwards claims the Project 8 “sounds like no other Jaguar”.

Jaguar will offer some customisation options so customers can personalise their Project 8, but that refuses to budge when it comes to either wheels or tyres. The only body panels the XE SV Project 8 shares with its regular siblings are the front doors and roof. The AWD system is lifted from the F-Type SVR and tweaked, with an electronic diff at the rear; while Jaguar claims the Quickshift transmission (with ‘pistolshift’ lever’) can reduce shift time to 200 milliseconds – the company’s quickest to date.

If all that makes the Project 8 sound more like a race car than a road car, that is exactly the point. Jag bosses claim that despite the headlights and numberplate, in no way was the XE SV Project 8 intended to be a useable and friendly grocery getter.

“My SVR is a useable, everyday car. If this ends up being an everyday car, we’ve missed the point,” Mark Stanton, SVO’s director, said.

And yet, Jaguar still went to the trouble of fitting the car with a WiFi hotspot which will connect to eight different devices. Because, what’s the point of crushing your opposition at a track day, if your mates can’t Snapchat it at the same time? While the car comes with a full interior as standard, a Track Pack option (which Jag hasn’t announced the price of), will get rid of the rear pew, replace the front seats with Sabelt racing buckets, and lower the ride height by 15mm. It also adds a roll cage and fire extinguisher, but shaves 12.5kg from the car’s weight.

If you are one of the lucky few that gets to own one, Jaguar predicts the Project 8 will be an instantly appreciating asset. Clearly, this will hinge upon exactly how much of the massive investment ploughed into this limited-run car inevitably trickles down into a roadgoing variant and how closely that car can mirror the capabilities of the Project 8. For the time being at least, Jaguar has set a very fast-moving target for its rivals to draw a bead on. Albeit at a price.