Well, that’s not nearly enough according to Joel from Thornleigh, who is trying to offload his secondhand Corolla for a frankly insane $159,500.

It has to be said here, that we at Wheels HQ couldn’t believe our eyes when we first saw the ad, and decided to give Joel a call to find out why he is selling the car for such an incredible amount.

While most would just assume that our ambitious seller had confused the selling price and odometer fields, Joel says not so!

“I was trying to get some money for an upcoming wedding,” Joel told Wheels. 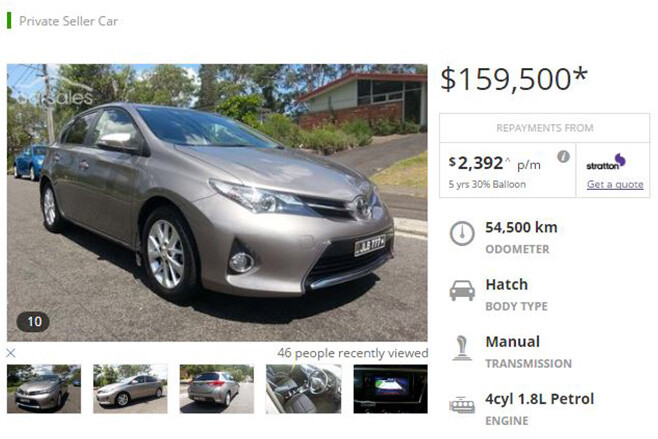 “I listed a reasonable price at about $15,000 but just didn’t get any contact. Then I started to change my mind thinking I would hold onto the car, so put the price up to $98,000 so no one would contact me.

“But then all of a sudden within three days I had a dozen different calls all thinking I had done it by mistake and added on an extra zero.

“Some generous person out there might be looking for a new car and willing to support my future life and find the ad.”

Joel explained he was happy to hold onto the car for now, and was patiently waiting for a generous benefactor.

“I’d be willing to get over the emotional loss [of selling the car] if someone paid that price,” he laughed.

While we wish Joel well on his endeavour for the same money you could have a BMW M3, Alfa Romeo Giulia QV, Mercedes-AMG C63 S, an Audi RS5, or seven brand-new Corolla Ascent Sport manuals, all with cash to spare.

It may not be the quickest way to sell a secondhand Corolla with 54,500km on the clock, but it may be the most profitable if Joel’s plan works.