Mercedes-AMG has all-but confirmed the next C63 will be powered by a four-cylinder turbo, but one packing a monstrous 480kW in conjunction with a powerful new rear-axle electric motor.

For the first time, the C63 will also be equipped with tarmac-tearing all-wheel drive with 0-100km/h times expected to dip into the low three-second range.

That’s thanks to a new, F1-inspired turbocharger with an in-built 6kW electric motor promising next to zero turbo lag despite producing an incredible 40psi (2.8 bar) of maximum boost pressure.

AMG says it’s the same kind of turbo fitted to its forthcoming ONE hypercar. 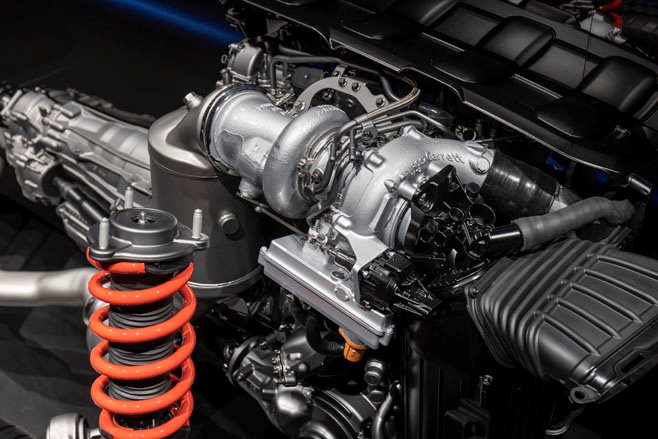 The high-tech turbo four-cylinder will work with a new, compact, rear-mounted electric motor supplying a constant 70kW, but with as much as 150kW available in 10-second bursts.

Maximum electric motor torque is 320Nm, while engine torque is expected to exceed the A45's 500Nm.

Combined with the 330-350kW internal combustion engine, AMG confirmed overall power will be in the 480-500kW range (although Wheels estimates 400-420kW will be the stated power figure; the current twin-turbo V8 C63 S produces 375kW and 700Nm). Torque could be as high as 900Nm.

The new C63's high-tech mumbo will reach all four wheels via AMG’s now familiar 4MATIC-Plus system, a central propeller shaft continuing to send power to an electronically locking rear differential, to which the electric motor attaches.

AMG did not comment on potential front/rear drive splits but left the door open to a rear-drive model and hinted the 4MATIC-Plus C63 could come with a rear-drive-only Drift Mode, much the same as existing all-wheel drive AMG models like E63 S and GT63 S. 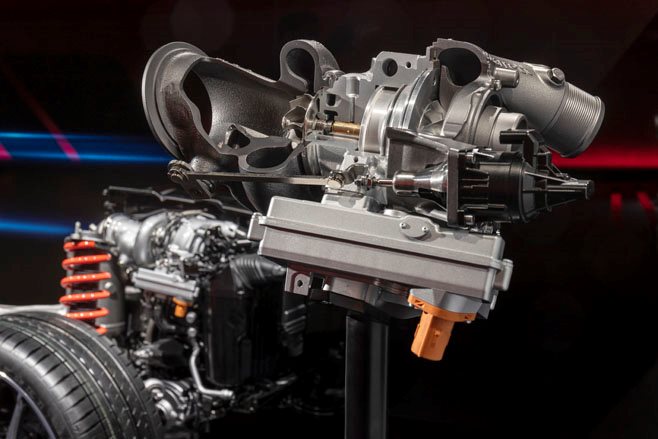 Powering the new electric motor is an also new, high capacity 6.1kWh li-ion battery offering super-fast discharge/recharge abilities, as well as integrating into a cooling circuit with 14L of its own fluid.

AMG claims the battery is made for racetrack performance and says it has twice the power density of a conventional battery.

Wheels understands the hybrid C63 will offer plug-in recharging ability, but AMG did confirm an EV-only Electric mode available up to 130km/h.

EV range was not revealed, AMG simply saying that unlike other performance hybrid systems, its system is built for performance and overall efficiency rather than maximum electric-only range.

“Our concept is rather new and focused on getting performance into a hybrid powertrain,” Head of Electric Powertrains Jochen Schmitz told Wheels in a video Q&A.

“[We wanted to prioritise] racetrack usage and stuff like that into this hybrid system. Many of the well-known parallel P2 hybrids aren’t focused on performance, they’re more focused on range or other stuff, so it was on us to go this new way completely on our own.” 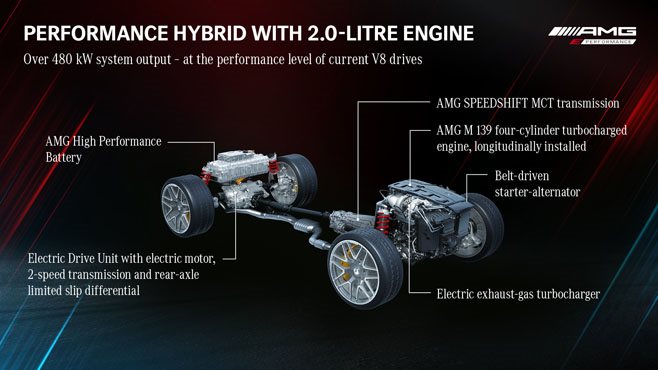 A nine-speed MCT (wet clutch) paddle-shift automatic transmission continues to be employed; and for the first time the C63 will utilise brake-by-wire, with only a digital connection between the pedal and the brakes themselves.

Four stages of brake recuperation will be available with the highest setting scavenging up to 90kW and providing a proper one-pedal driving feel.

While no word yet on overall vehicle weight, engineers said all the components of the new hybrid system weigh approximately 200kg, with the battery itself 89kg. The M139 engine weighs around 50kg less than the outgoing M177 4.0-litre twin-turbo V8.

The all-wheel drive system is expected to also add kilos, although further weight savings could be possible through increased use of aluminium in the new 206-series C-Class body-in-white. The current twin-turbo, rear-drive C63 S Coupe weighs 1725kg (DIN). 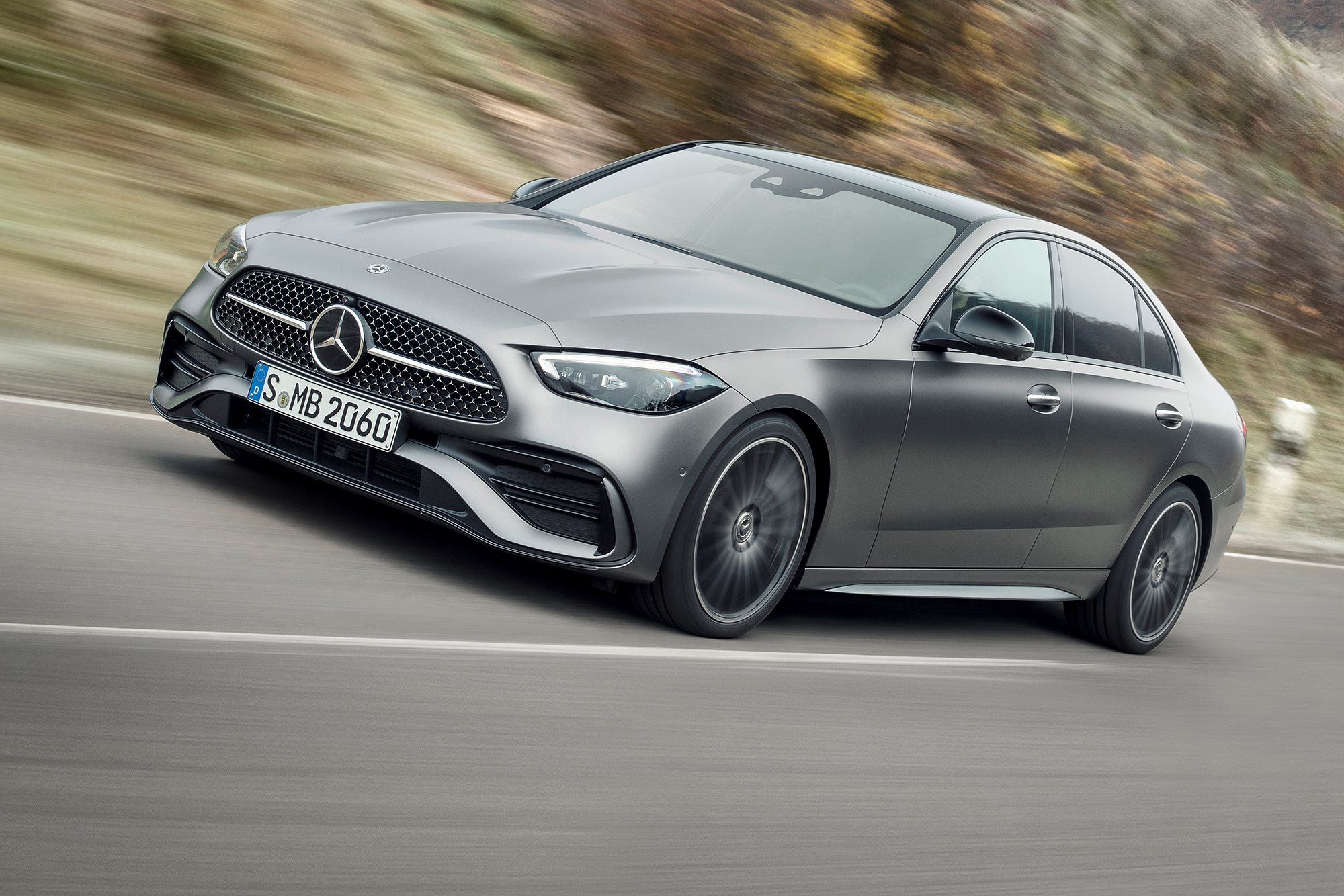 For C63, AMG is expected to work carefully on the M139’s sound as well. “Will it sound like a V8? No, of course it will sound like a very high-performance drivetrain,” said engine specialist Hannes Lohrmann.

AMG has not yet stated fuel consumption figures for its new hybridised models but has promised “outstanding efficiency”.

Together with proper torque vectoring front and rear and a tricky all-wheel drive system, the upcoming C63 should also offer next-level handling ability, especially if fitted with the new 206-series C-Class's rear-wheel steering. AMG has not confirmed as much as yet.

The next generation AMG C-Class models are expected to be revealed later this year while Wheels expects an Australian arrival late 2022 or early 2023.

While production of the 205-series C63 sedan and wagon has just concluded, order books for the current, V8 C205 C63 Coupe are expected to remain open for some time yet as production of the two-door continues. A 206-series C-Class Coupe has not yet been announced.

AMG also revealed details of the upcoming hybridised GT63, which will use the same rear-mounted battery, electric motor and two-speed gearbox slated for the next C63.

Together with the existing 4.0-litre twin-turbo V8 (with conventional turbochargers), the hybridised powertrain is expected to offer 600kW and 1000Nm with 0-100km/h times potentially dipping into two-second territory.

The hybrid GT63 is not due in Australia until the third quarter of 2022.

AMG refused to answer whether the new electric turbocharger might appear at some point on an A45 derivative.