Mercedes-AMG has the Porsche 911 GT3 RS firmly in its sights, unveiling its most focused model yet, the GT R, at this weekend’s Goodwood Festival of Speed.

Developed primarily at the Nurburgring the GT R is lighter, more powerful and incorporates high-tech chassis componentry, including rear-wheel steering and active aerodynamics, all aimed at maximising racetrack performance.

The GT R is based on AMG’s range-topping GT S sports car, however virtually no aspect has gone untouched in the pursuit of performance. The dry-sumped 4.0-litre twin-turbo V8 now produces 430kW/700Nm, increases of 55kW/50Nm, thanks to new engine mapping and an increase in boost pressure from 1.2 to 1.35bar. 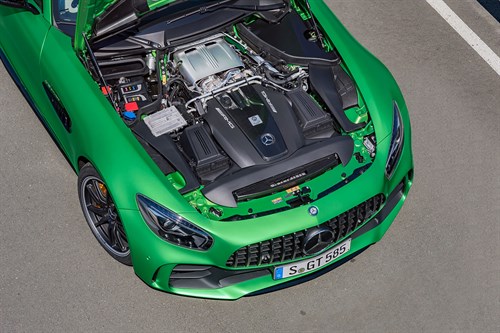 Combined with revised gear ratios and faster changes from the seven-speed dual-clutch transaxle, AMG claims the GT R will hit 100km/h in just 3.6sec and charge to a top speed of 318km/h.

It’s the GT R’s dynamics, though, rather than its straight-line performance that is likely to raise most eyebrows. Never before has AMG created a model so focused on lap times, not even the mighty SLS Black of 2012. 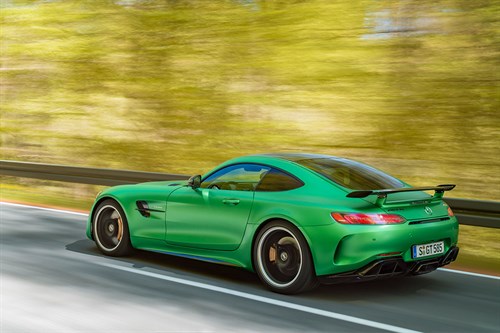 Weight saving measures abound, including aluminium suspension, carbon front guards, roof, and propshaft, magnesium front deck and titanium exhaust system. Overall weight has dropped just 15kg to 1555kg, however, as AMG has added almost as much as it’s taken away in new equipment.

Rear-wheel steering heads the list, which as is increasingly common turns the rear wheels in the opposite direction to the fronts below 100km/h to improve agility and in the same direction above 100km/h to aid high-speed stability. Carbon fibre braces for the underbody and front-end increase body stiffness. 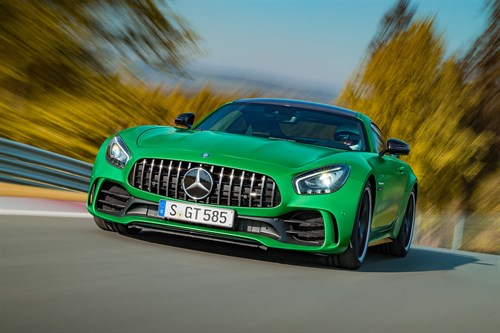 The GT R is AMG’s first foray into active aerodynamics, an area company boss Tobias Moers has been hinting at for some time. Downforce levels have increased markedly thanks to electronically-controlled components in the front end that shape airflow.

A carbon flap in front of the engine descends 40mm when above 80km/h in RACE mode, accelerating the airflow and sucking the front end of the car to the road. At the same time the radiator air outlet opens to feed air to the rear double diffuser while vertical louvres behind the front fascia can close to reduce drag or open to provide cooling air to vital componentry.

Equally clever is AMG’s nine-stage traction control, lifted from its GT3 race car. Operating independently of the three-stage ESP, a rotary dial on the centre console allows drivers to select the amount of rear-wheel slip they want depending on the available traction and road conditions. 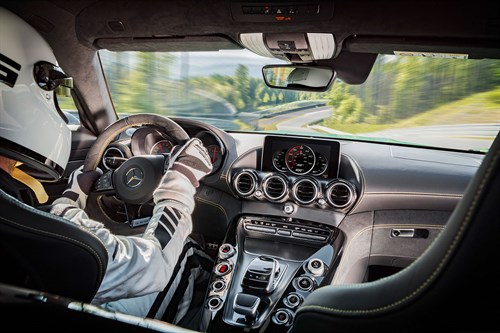 AMG claims the trick traction system is proactive, able to anticipate situations by working with the electronically-controlled differential to allow a set level of wheelspin but no more.

The GT R arrives in Australia in July 2017, however expect supply to be extremely limited and pricing to nudge the $400,000 mark.