HE may have just reset his own road car lap record around Mt Panorama, but German racing legend Bernd Schneider isn’t best pleased with his effort.

He punted the shockingly green Mercedes-AMG GT R around the hallowed mountain track in a time of 2min 16.5sec, knocking a handy eight or so seconds off his own record, set in 2015 at the wheel of the slightly more sedate Mercedes-AMG GT S.

But Bernd, speaking with MOTOR after setting the record, reckoned there was still more in the $349,000 GT R, which was flown out from Germany just for the event and will return home this week. 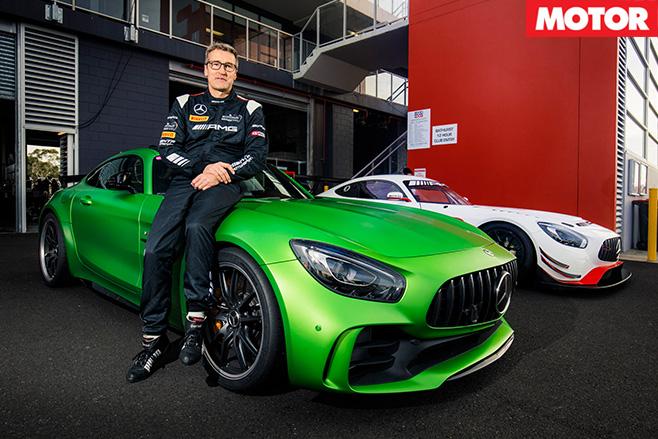 “The surprising thing about the car is that it’s so comfortable,” he said. “People think ‘oh, it’s a sportier version [of the GT S], it will be super stiff.’ It’s actually more comfortable than the GT S, a bit softer in the springs, but it’s so well balanced.”

Bernd said that an issue with his helmet, as well as the 35 degree C plus temperatures of the day, meant he dropped a little time on Friday’s officially timed lap at the Bathurst 12 Hour race.

“I was distracted by a camera bumping my helmet,” the affable multiple DTM champion and former F1 driver explained, “and I had to adjust it a couple of times, so that cost some time. I reckon we could easily get into the 15s with it.”

It was a bit of a handful on Mt Panorama’s fearsome crest on Conrod Straight, according to Bernd. “Because it’s a road car, you have to be a bit careful, because the air gets under it and [mimics tweaked steering wheel],” he said.

Still, the GT R punched through 308km/h on the way into the Chase, so it obviously didn’t affect him too much.