MERCEDES-Benz’s next crop of autonomous cars will leave Australian speed limits behind as they ready themselves for a life in the fast lane.

The carmaker last week unveiled the technology that will feature in its upcoming E-Class sedan, including a suite of driver aids that will even perform a lane change for the driver in fast-moving freeway traffic.

And in Germany, the carmaker will soon tweak its automated cruise control system – which can automatically slow its cars when the vehicle in front does – to work at 250km/h; an increase from its present speed of 210km/h.

Jochen Haab, a Mercedes-Benz vehicle engineer working on the next generation of the carmaker’s Pilot Assist system, said he believed the next-generation system he was working on would work best on the freeway at speeds of between 100-130km/h. “I don’t see 200km/h as a sensible speed for autonomous driving, to be honest,” he told Wheels.

“I think somewhere between 100km/h and 130km/h is a reasonable speed for autonomous driving, and we will probably start with speeds that you will be very much acquainted with in Australia – which might be a problem for acceptance at the beginning in Germany.”

According to Haab, the benefit of being able to move cars autonomously and at higher speeds down a freeway would result in less congestion, but in some instances could actually increase commuting times.

“Autonomous driving is not there for getting you there the fastest possible way, but the most comfortable way,” he said. 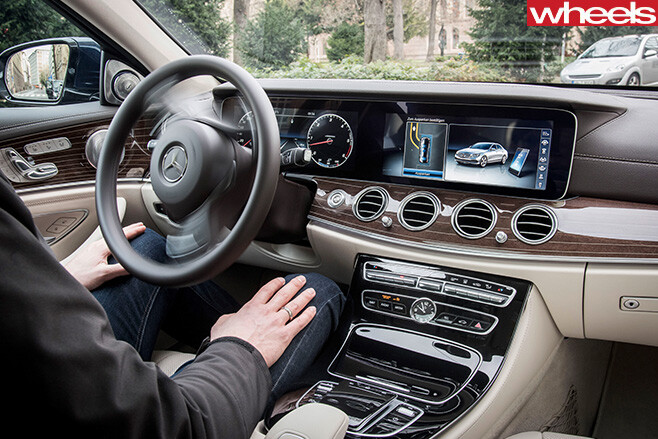 “It might take you five or 10 minutes longer (to drive in autonomous mode rather than driving yourself) depending on the stretch that you have to go, but you will get there relaxed.

“And 100km/h to 130km/h is a reasonable speed. Again, you have to be able to deal with at least five seconds headway [to the car in front] and that is limited by a sensible range of radar.”

According to Haab, a next-generation Mercedes-Benz S-Class limousine due in about 2018 will be the first Mercedes-badged vehicle to cross the divide into the next stage of autonomous vehicle technology – a highly automated car that can tell when it reaches its limits and hands control back to the driver.