On the eve of claiming his second Supercars championship, DJR Team Penske driver Scott McLaughlin has suffered a spectacular crash while qualifying for the second leg of the Gold Coast 600.

The young Kiwi clipped the wall out of turn two, which ricocheted him into the opposite fence at an estimated 140km/h before flipping the car up on its side, sliding to a halt with the right-side wheels torn from the car. 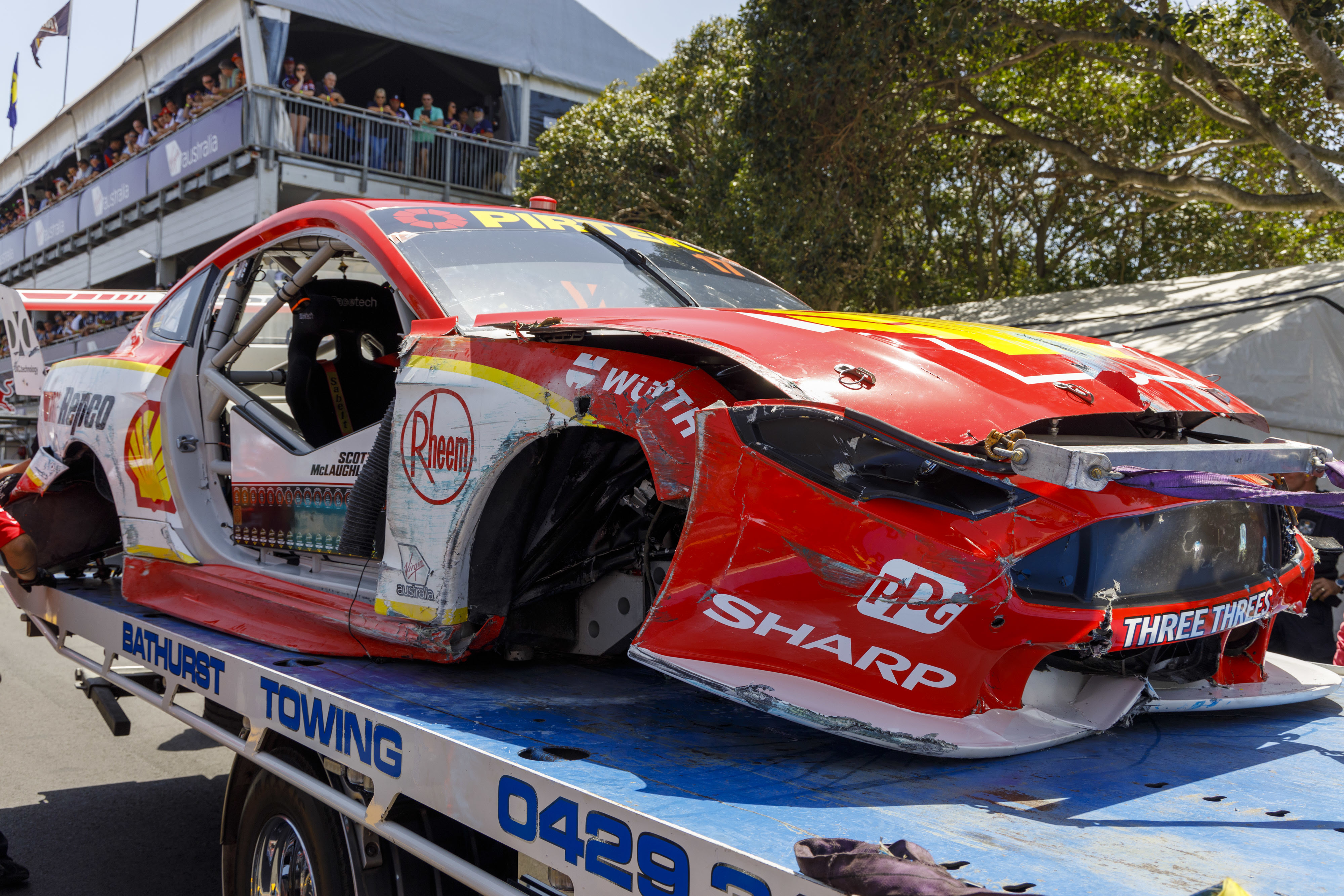 The damage was so severe that McLaughlin becomes the second car to withdrawn from the race, after a crash for rival Ford Mustang driver Chaz Mostert yesterday forced the Tickford team to write his chassis off as unrepairable.

Safety crews – and McLaughlin’s on-track arch-rival, Holden racer Shane van Gisbergen – were quickly on the scene to assist the stunned McLaughlin, who was taken to the circuit’s medical centre.

The qualifying session was red-flagged, with – somewhat ironically – the #17 Bathurst-winning car holding the top spot until the very last moments, before being pipped by van Gisbergen.

“For sure it’s bad ending the day like this, but that’s motor racing,” said McLaughlin’s co-driver for the weekend, Alex Premat. “I’m sure Scotty did the best but he could do – we really didn’t see what happened – but it’s very unfortunate. All that matters is that Scotty is out of the car.”

“To see one of your mates on his side way after the corner, which means it must have been a big shunt, was shocking,” said van Gisbergen, who technically broke a few racing rules to stop on the circuit to assist his friend. “He was shaken, but okay. Not nice.”

McLaughlin apologised profusely to his team after the estimated 40G shunt into unprotected concrete, despite the fact the young Kiwi holds an almost unassailable lead in the 2019 championship.

In fact, if McLaughlin had placed either first or second today, or have finished no more than one spot behind the second-placed van Gisbergen, he would have claimed his second overall championship on the trot with two rounds still to race.

Wheels understands that the car will be restored to its Bathurst specification, though it's unlikely to ever race again.

It's a significant car in the context of Supercars racing, despite only debuting this year; it was on track to claim the record for most wins in a single season for any single chassis, and it's also the first Penske car to claim Bathurst.

McLaughlin spoke to fellow Kiwi Greg Murphy after being released from the medical centre, confirming that he was uninjured.

"My 'motherhood' and my heart hurts, but that's it," McLaughlin told Murphy for Fox Sports after being released from the medical centre. "I'm just terribly sorry for everyone at the team. we were trying to do a practice shootout lap there, and I just just clipped the concrete wall there - I've clipped the tyres there this weekend, but this time it was a bit further around the corner.

"It surprised me. By the time I was on my side, I was like, geez. It happened so quick. I was more worried about people hitting my roof, then I saw some fluids and I thought 'nah, I just want to get out'."

After the conclusion of the Top Ten shootout, word came through that McLaughlin has been transported to hospital for further checks.

In-car data showed a peak impact of 43G on McLaughlin, prompting a series of mandatory tests.

"The ADR in Car 17 recorded an initial 31.5G (cumulative) impact followed by a second 42.7G impact which caused severe damage to the car and wall," read a statement from Supercars medical chief, Dr Carl Le.

"Scott was thoroughly examined by the medical team and a SCAT-5 concussion test was completed.

"Scott passed the test and was released from the medical centre back to his team. After further observation, I have recommended that Scott be admitted to hospital for closer observation.

"He has just left the circuit now."

Subscribe
Tim Robson
Contributor
Tim has been involved in automotive journalism since 1999.