Ford Ranger gets the mil-spec treatment

YOU MIGHT be thinking that an olive-drab wrap doesn’t make a vehicle mil-spec, but there’s more to this Ford Ranger than first appearances reveal.

British consultancy and engineering firm, Ricardo, has taken to the popular pick-up and transformed it into a general purpose utility vehicle for defence personnel. 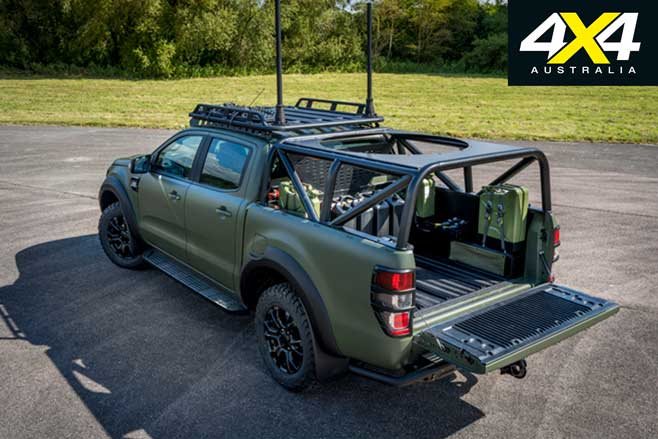 Ricardo was the company responsible for the design and construction of the WMIK light attack Land Rovers and the Foxhound vehicles, both currently in use by the British Army, so they know a thing or two about this stuff. The company’s take on the Ranger demonstrates a militarised adaptation of the ute, to show how this workhorse can offer a highly cost-effective, multi-role transportation product for defence and other security-related applications.

Mounted in the cargo tray is a rollover protection cage, with provisions for a ring-mounted weapon system protruding from the top. On the inside, four-point seat harnesses secure the occupants and a 24-volt electrical system supplies the added power required for military use.

Heavy-duty springs and shocks not only support the extra weight of the modifications but give added ground clearance for off-road use.

This vehicle is powered by the Ranger’s 500Nm 2.0L bi-turbo-diesel engine and 10-speed auto combination, but there’s no reason that any other standard Ranger powertrain couldn’t be used.

You might like the idea of a militarised Ranger with weapons mounted in the back to cope with city traffic, but, other than that use, we don’t see the Ricardo Ranger being offered in Australia anytime soon.

MORE: Six of the best vehicles to serve Australia's military