Big news across the motorsport world with one champion crowned and another retiring. Plus: Will Brown to be the next big thing? And the 2017 F1 Calendar

VERY few saw this one coming. Just five days after Nico Rosberg celebrated his narrow title win over Lewis Hamilton in the 2016 Formula One World Championship, the motor racing world was rocked with the announcement that he was quitting the sport, effective immediately.

The 31-year-old German had been celebrating his first world title triumph with his team, family and sponsors.

The first reigning world champion to end his career since Alain Prost in 1993, Rosberg raced in a total of 206 grands prix and won 23.

"Since 25 years in racing, it has been my dream, my 'one thing' to become Formula One world champion,” Roberg said as he explained his decision to walk away.

“Through the hard work, the pain, the sacrifices, this has been my target. And now I've made it. I have climbed my mountain, I am on the peak, so this feels right.

“My strongest emotion right now is deep gratitude to everybody who supported me to make that dream happen.” 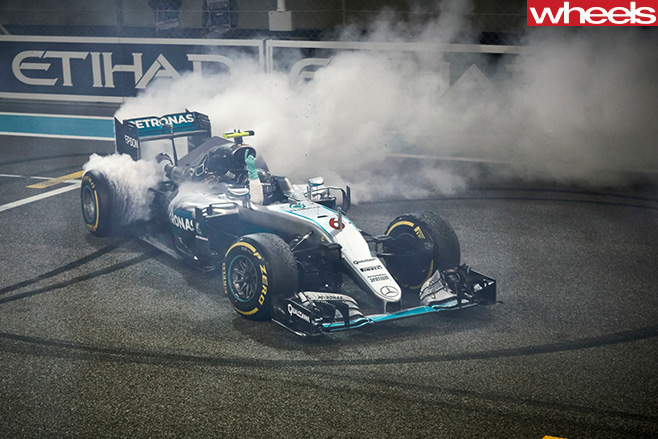 Rosberg went on to say that the championship-winning season was “so damn tough”.

He said he had to push like crazy in every area after the disappointments of the last two years, fuelling his motivation to levels he’d never experienced before.

The tension-filled title campaign had a major impact on his family. Rosberg, who became a father late last year, singled out his “incredible” wife Vivian.

“She understood that this year was the big one, our opportunity to do it, and created the space for me to get full recovery between every race, looking after our daughter each night, taking over when things got tough and putting our championship first.” 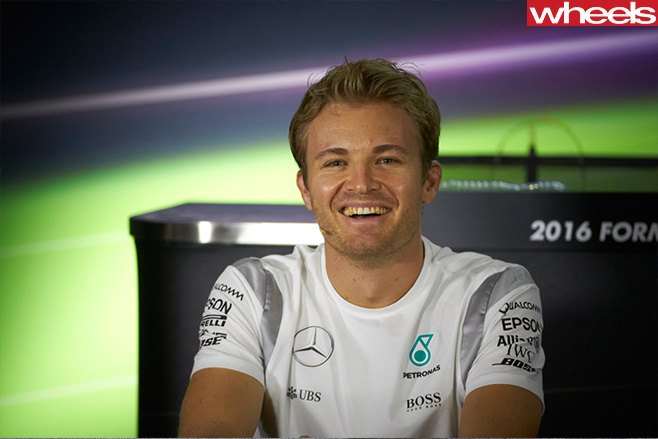 After Rosberg won in Suzuka at the Japanese Grand Prix, the German says the pressure on him cranked up and it was then he began to think about ending his racing career if he became world champion.

“On Sunday morning in Abu Dhabi, I knew that it could be my last race and that feeling cleared my head before the start. I wanted to enjoy every part of the experience, knowing it might be the last time... and then the lights went out and I had the most intense 55 laps of my life. I took my decision on Monday evening. After reflecting for a day, the first people I told were Vivian and Georg [Nolte, from Nico's management team], followed by Toto [Wolff, the head of Mercedes-Benz Motorsport].”

Asked if there was any chance of a return to the F1 cockpit, Rosberg responded: "No, definitely not. End of story. Done."

Rosberg’s decision to quit early but while on top ranks up with the retirement calls made by undefeated heavyweight champ Rocky Marciano, who was 32, and tennis ace Bjorn Borg, 26 at the time. 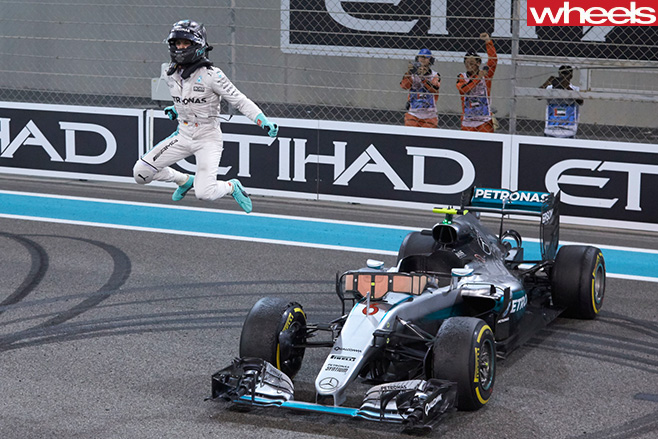 Wolff admits Rosberg’s decision took him "completely by surprise" but that he immediately accepted the outcome.

"This is a brave decision by Nico and testament to the strength of his character. The clarity of his judgement meant I accepted his decision straight away when he told me.”

Wolff praised his now ex driver, suggesting he has a special combination of natural talent and fighting spirit that have brought him to where he is today.

“Throughout his career, people have thought he was on a golden path to success just because his father was a world champion; in fact, I think in some ways that made the challenge greater - and meant he had to fight even harder with the weight of expectation on his shoulders. 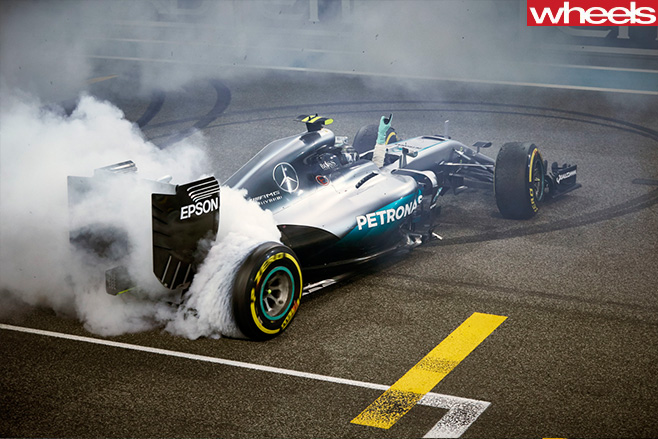 "With Mercedes, Nico has been a relentless competitor, bouncing back from tough times in an inspirational way, and he earned the respect of the sport with his tenacity, his fighting spirit and his grace under pressure”.

Niki Lauda was less thrilled, bluntly declaring Rosberg had left his team awkwardly placed to secure a worthy replacement. Half the drivers on the grid had been in touch, sounding out job prospects, he said later.

Rosberg made his F1 debut for Williams at the 2006 Bahrain Grand Prix. 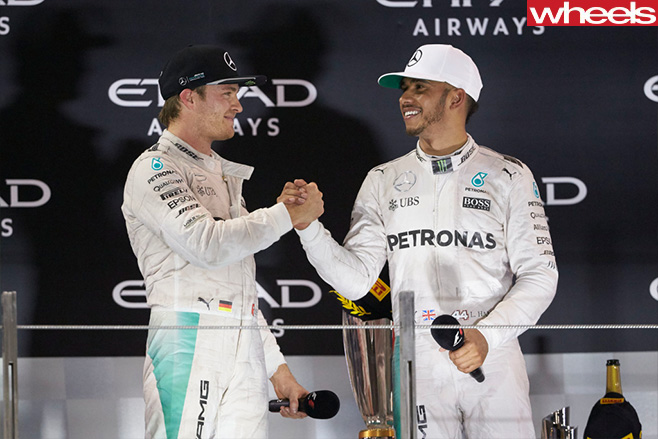 Rosberg’s unfriendly team-mate Hamilton said he wasn’t rocked by the move to retire.

Churlishly, he declared: "This is the first time he's won in 18 years, hence why it was not a surprise that he decided to stop.

"He's also got a family to focus on, and wants more children, and F1 takes so much of your time. Will I miss the rivalry? Of course."

Hamilton added that he “doesn't care” who replaces Rosberg at Mercedes.

Hopefully it’s someone who might put F1’s biggest spoilt prat in his place.

After an uncharacteristically tentative start to the title-deciding weekend on the streets of Sydney, Shane van Gisbergen clicked into gear during the Saturday 250km leg of the Sydney 500 to lock-up his first Australian Supercars Championship.

When the Kiwi was rightly hit with a drive-through penalty for turning around reigning champion Mark Winterbottom in a clumsy passing move early into the race, it looked like the Red Bull Racing driver might have to wait another day to clinch the crown.

But shaking off his bad start to the race and the penalty (which dropped him to 22nd), van Gisbergen uncorked the fighting spirit and aggressive driving that had propelled him to the championship lead this season, picking off car after car to fire back up the leaderboard. 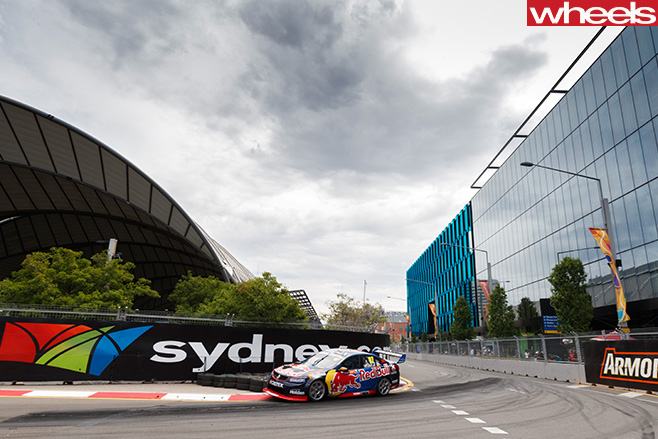 Van Gisbergen began the Saturday race with his Commodore on pole and 191 points ahead of his only title rival, Red Bull team-mate Jamie Whincup, knowing he needed to finish fifth to bag the championship.

Helped by clever strategy-on-the-run moves by his team and a late safety car period which closed up the field, van Gisbergen went on the hunt when racing resumed.

He decisively climbed back to sixth, but then in swift succession nipped past Craig Lowndes’s Commodore, Scott McLaughlin’s Volvo and James Courtney’s struggling HRT Commodore to make it on to the podium in what had been a driving masterclass. 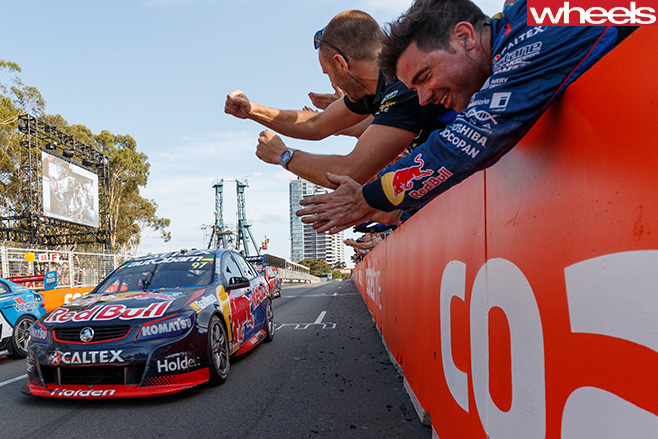 Up front, Whincup couldn’t do any better to keep his slender chances alive, leading from the start and going on to notch his seventh win of the year, ahead of an impressive Garth Tander, enjoying his final race weekend with the Holden Racing Team.

Van Gisbergen’s third place lifted him to an unassailable 170 points ahead of Whincup with just one race and 150 points to fight for.

“It’s been an awesome few years in the Supercars series and taking the championship has always been a lifetime goal so I’m stoked,” van Gisbergen said.

After a huge intra-team scrap that has raged all season, Whincup acknowledged van Gisbergen and his crew deserved the title success more than anyone else. 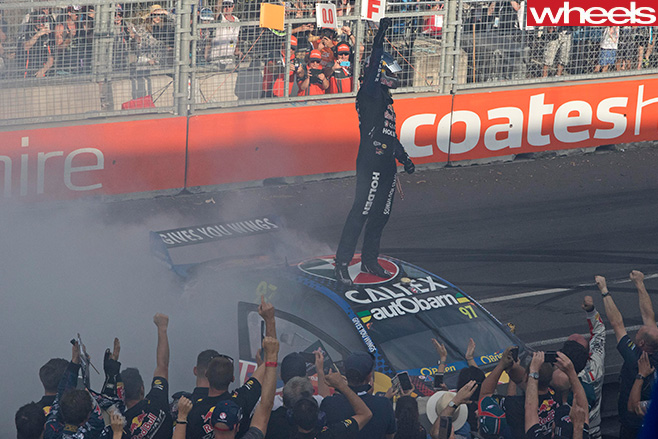 Van Gisbergen joins Jim Richards (four-times winner) and Robbie Francevic (once) as New Zealanders to have won the Australian touring car/supercars championship since it began in 1960.

McLaughlin finished fourth to edge his way past Craig Lowndes into third place in the championship.

With the title in SVG’s keeping, Sunday’s 250km contest was largely meaningless bar the unresolved fight for third place between McLaughlin and Triple Eight’s Craig Lowndes.

But van Gisbergen was also very keen to have a strong concluding race, finishing his championship year on a high and do a spectacular celebratory burnout. 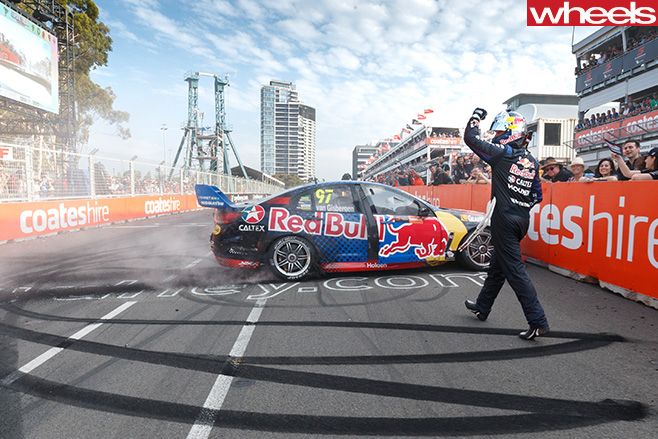 Pole for Sunday’s race was a story in itself with departing HRT Walkinshaw driver Garth Tander showing the way ahead of van Gisbergen, Courtney and Erebus’ David Reynolds. No Fords in the top 10, either…

Whincup soured his chances of a consolation win when he stuffed up his shootout run and finished 10th.

Tander jumped perfectly when the lights went out, to bolt away from van Gisbergen, Reynolds and Courtney.

On lap 20, van Gisbergen moved past Tander with Reynolds as impressive as ever on street circuits, looking to give Erebus its first podium of the year.

What looked to be an unsafe release by Red Bull at the first round of pit went unpunished even though van Gisbergen and Tander came together.

A few safety car interventions at the end of a long, hot day closed up the pack but the new champion stayed up front to place an exclamation mark on a dream season. 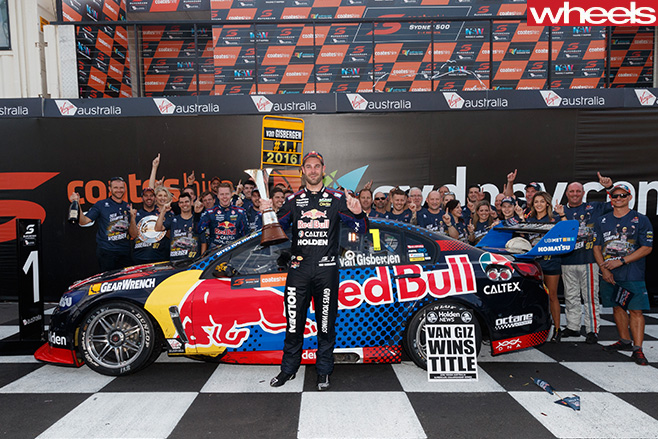 Tander’s pole and second place in his final few hours with HRT again raised questions why the driver who is undoubtedly among the top half dozen on the grid could be without a worthy drive next season.

Third in the Sunday race was Reynolds, who withstood relentless pressure from Whincup to trouser his best result of the year.

SVG’s final margin over Whincup in the championship was an even 200 points.

McLaughlin gave GRM a nice parting gift by taking third in the standings from Lowndes.

Oh, and SVG did manage the killer burnout he promised. 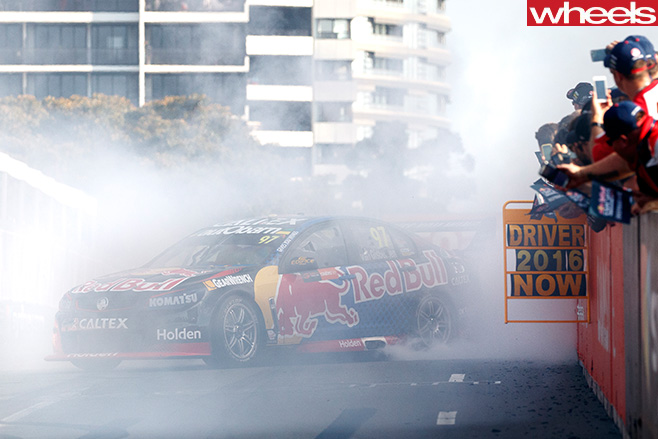 While we celebrate a quite magnificent fight for the title between two standout Red Bull Racing Australia racers, no-one should rue seeing the Homebush street race binned forever. It was a pathetic project from the moment former Supercars head honcho tabled the idea with a couple of his oily friends from the NSW Labor Government. Never one of Mark Skaife’s greatest creations, it has cost NSW taxpayers a poultice, has never been a financial success, nor a hit with fans, and has inflicted a large fortune in damages on team budgets.

The replacement street course venue in Newcastle needs to be so much better in every way.

In an ideal world, the money should go into a permanent motor sporting venue to serve the Hunter, but that’s a whole new argument for another time.

Toowoomba teenager Will Brown has stormed to an impressive victory in the inaugural one-make/one-model Toyota 86 Racing Series, reinforcing his class with dominance of the final weekend on the mean streets of Homebush.

Brown, 18, won two of the three races on the schedule at Homebush while the remaining race 14 was not resumed after a big shunt on the opening lap (see video).

With three wins at Bathurst, and two in Sydney, Brown wrapped up the series with five consecutive wins – some feat in a competition where all cars are theoretically equal. 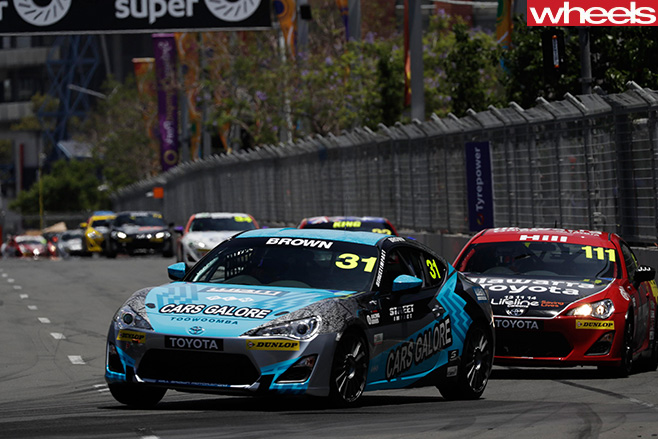 Brown's performances against drivers such as Glenn Seton and Steve Johnson at different stasges have put a fine point on his talent, given the size of his win. 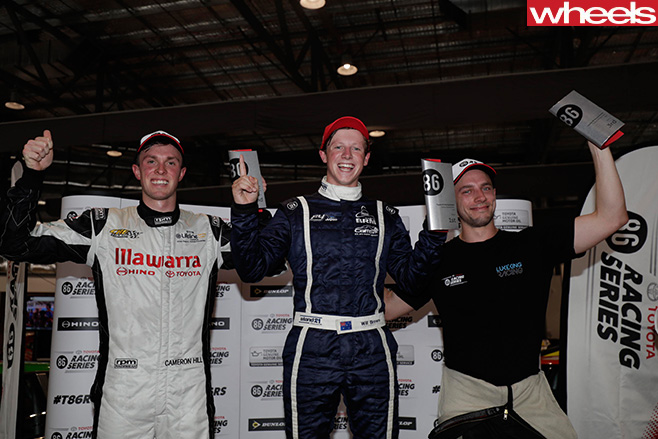 Brown is now off to the USA for a test in the US F2000 series, with the second-tier Dunlop Supercars Series and Porsche Carrera Cup in his sights for 2017.

The Toyota 86 Racing Series was run over five weekends, all in conjunction with Supercars rounds.

The Australian Grand Prix to be held on march 26 has been confirmed as the opening round of a 20-race Formula One world championship for 2017 – one fewer than this year.

We’ll see and hear the new noisier, faster F1 cars racing in anger before anyone else. 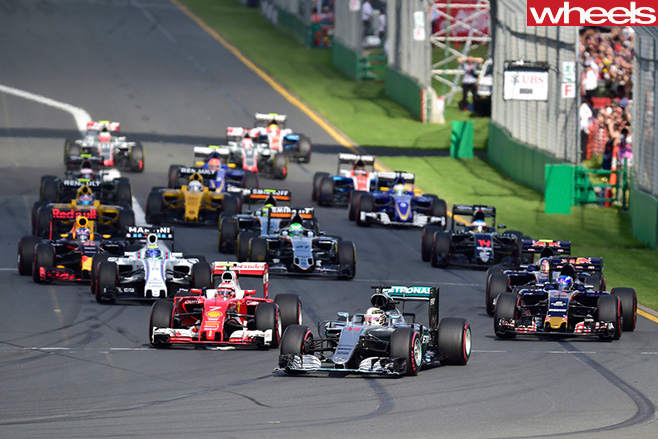 Germany has disappeared off the calendar again while the Brazilian Grand Prix is also in doubt, and will remain so until January, says F1 commercial boss Bernie Ecclestone.

The Canadian Grand Prix in Montreal, which had also been in under question, has been confirmed.

Another significant change is the moving Baku back a week to avoid a clash with the 24 Hours of Le Mans.