Amphibious ATV based in Ukraine is epic

Amphibious ATV is all kinds of cool. Watch it in action here.

REMEMBER the amphibious Jeep - 'Seep' - which travelled around the world back in the 1950s? Well, on a recent late-night social media binge, we stumbled on an amphibious ATV built by a Ukrainian-based mob.

Before we get into the nitty gritty, read all about the classic amphibious Jeep, piloted around the world by Australian Ben Carlin, here.

The Ukrainian-built example your eyeballs are currently feasting on is called SHERP The Ark, an "amphibious" all-terrain vehicle said to be capable of ferrying bulky cargo - or up to 21 people - over long distances under extreme conditions, and it can "move on any surface". 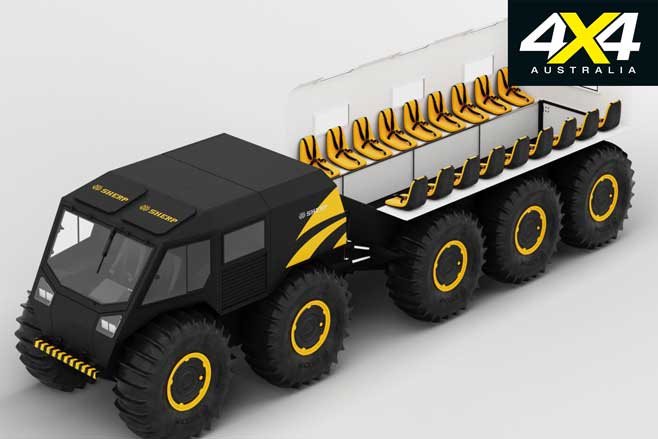 Interestingly, to save them knees, the vehicle comprises of an air-circulation system that uses exhaust gases to inflate/deflate tyres, which are all connected via a pneumatic circuit.

In another neat touch, the trailer can be personalised for different purposes. For example, SHERP offers a universal loading platform (to lug cargo); a personal transportation unit (to transport up to 21 passengers and the driver); a dwelling module (to live in); a medical module (for rescue operations); and a tank unit (to ferry fuel, water, etc.).

Watch the above video to see the SHERP The Ark in operation, or click on the SHERP ATV YouTube channel to learn about the other machines the Ukrainian-based company is cooking up.