The speedometer reads a slightly blurred 341km/h. This is white-knuckle, yellow-streak, pulse-racing fast, especially when you consider that we are maxing this bespoilered black beast on the A5 autobahn between Darmstadt and Frankfurt, and not on the Mulsanne straight, the Le Mans stage the Carrera GT was originally designed for.

This feature was first published in MOTOR's June 2004 issue.

Today, it’s a cold Tuesday in March, on a slightly damp three-lane German motorway, in light morning traffic. Let’s go for it.

Fifth is good for an incredible 283km/h. At 8200rpm, top gear takes over and whips us past the 200mph (322km/h) mark. Like heartbeats, the final 19km/h appear in digital increments. 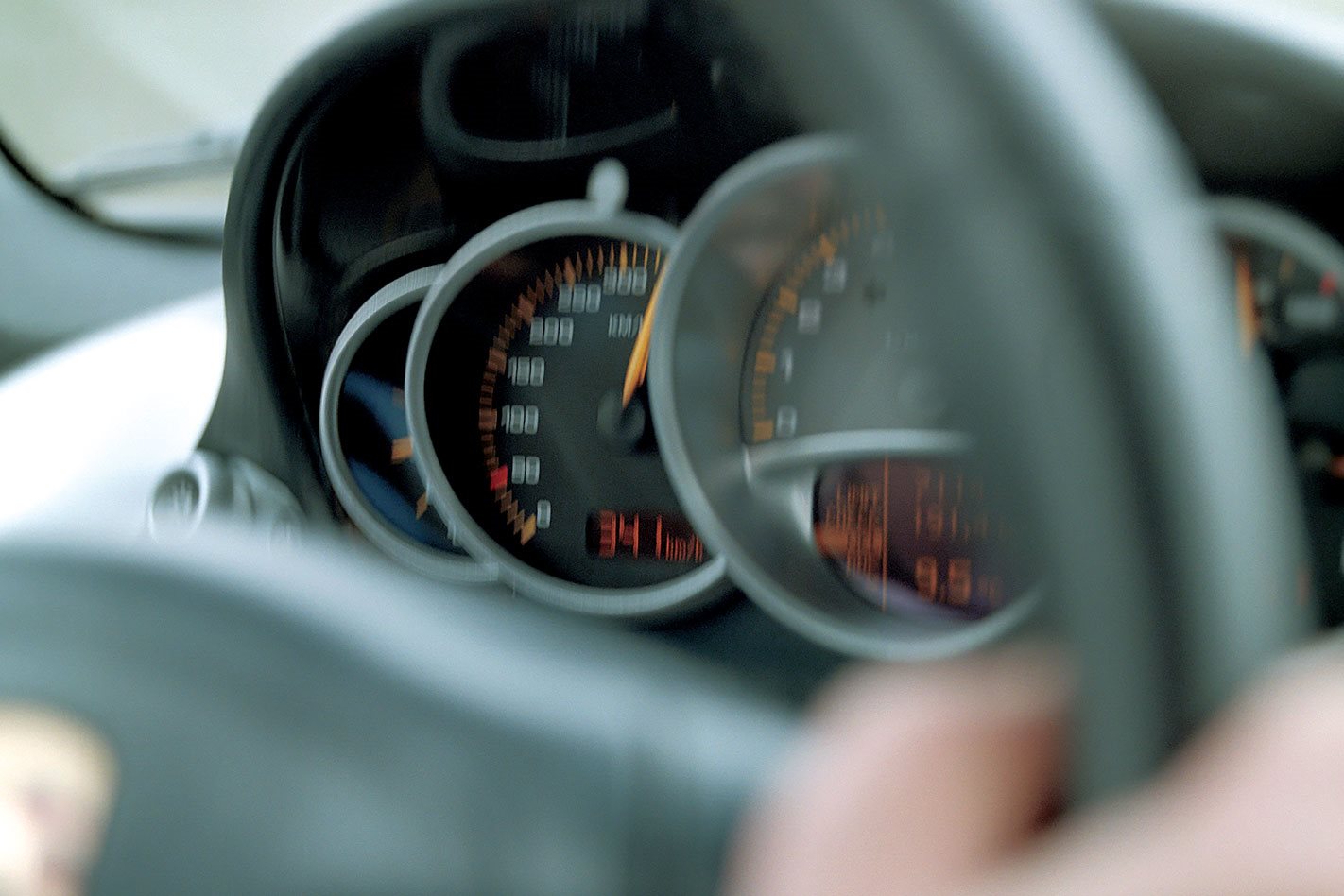 Former world rally champion Walter Röhrl has seen an indicated 353km/h, probably on the Nürburgring or in Nardo. But I lift off at 341km/h, not only because of the wayward white Mercedes Sprinter van zooming in on a blue Golf in the middle lane, but also because of the bright red warning display in the instrument binnacle. The accompanying message reads: “Malfunctioning Right Rear Tyre, Pressure 6.4bar”.

We pull in it at the next service station to check the brand-new Michelins. Nothing. Minutes later the chase vehicle’s driver gets out, smiles a telepathic smile and gives us the thumbs-up. Apparently the tyre-pressure sensors can be overly nervous. Don’t worry, we are being told.

And please also ignore the traction control and the brake pressure tell-tales – it’s only the on-board display that’s at fault, not the system itself. These are obviously still early days in the life of the fastest and most expensive Porsche currently on offer. 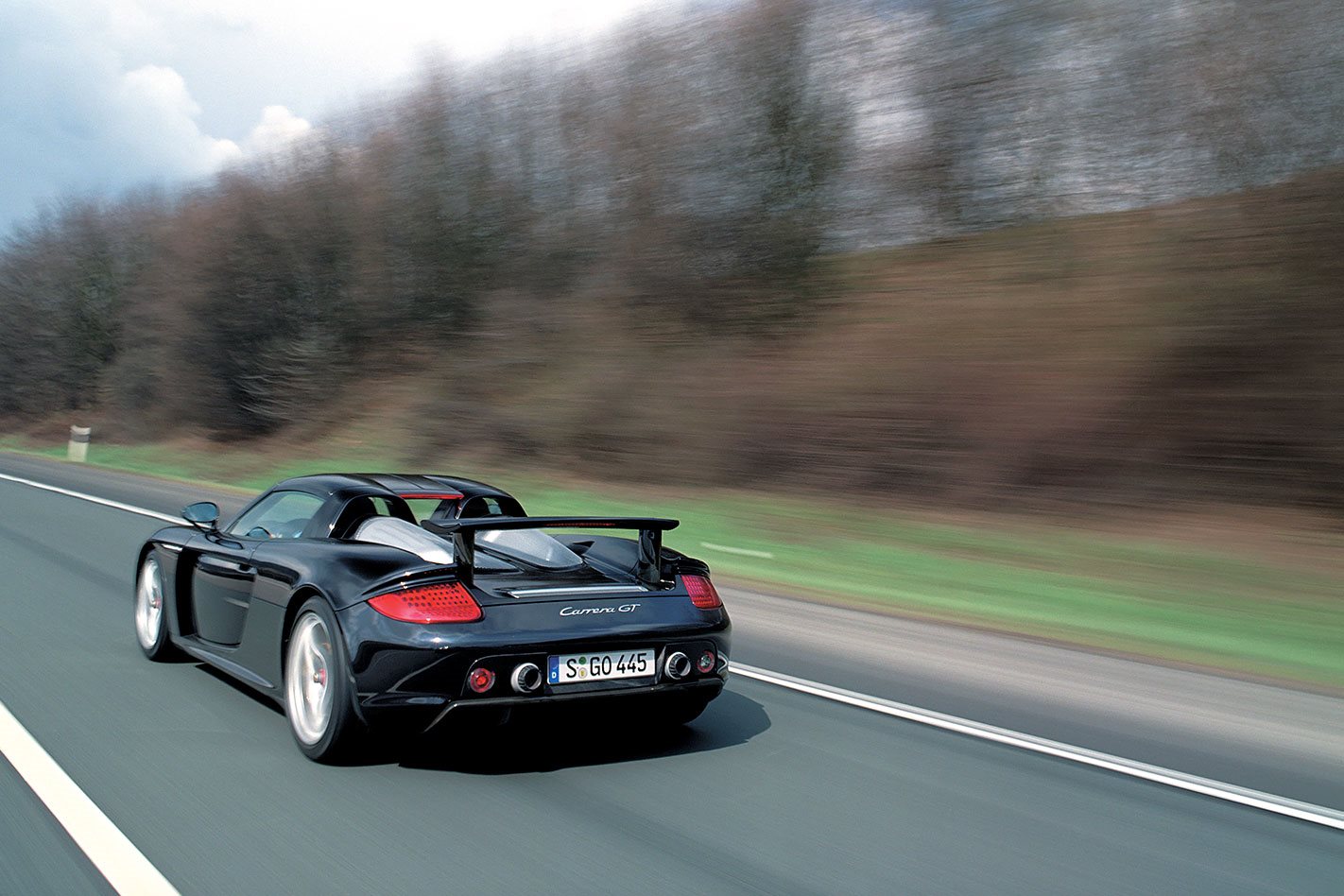 Between Stuttgart and Frankfurt, we have no trouble beating just about any other moving object on earth. In theory, the 160km of three-lane autobahn between Frankfurt and Cologne is heaven on earth for fast cars like this. But in reality, it’s now raining hard, we’re windsurfing the standing water in the dips and longitudinal grooves and the contact-no-contact impulses relayed through the leather-rimmed helm do not inspire confidence.

But then the weather improves and the Porsche gets a chance to roam its 200 to 280km/h sweet-spot. With no posted speed limit, some of the radii are still so tight that 240km/h feels like veering off the demarcation line between 9/10ths and 11/10ths.

At this extreme limit of adhesion, the Carrera’s steering is an absolute delight. Accurate and perfectly weighted, it lets you scan the road surface with the palms and fingers of your hands. Although the car’s front end is quite stiffly sprung, the Carrera GT oozes amazing high-speed solidity and stability. 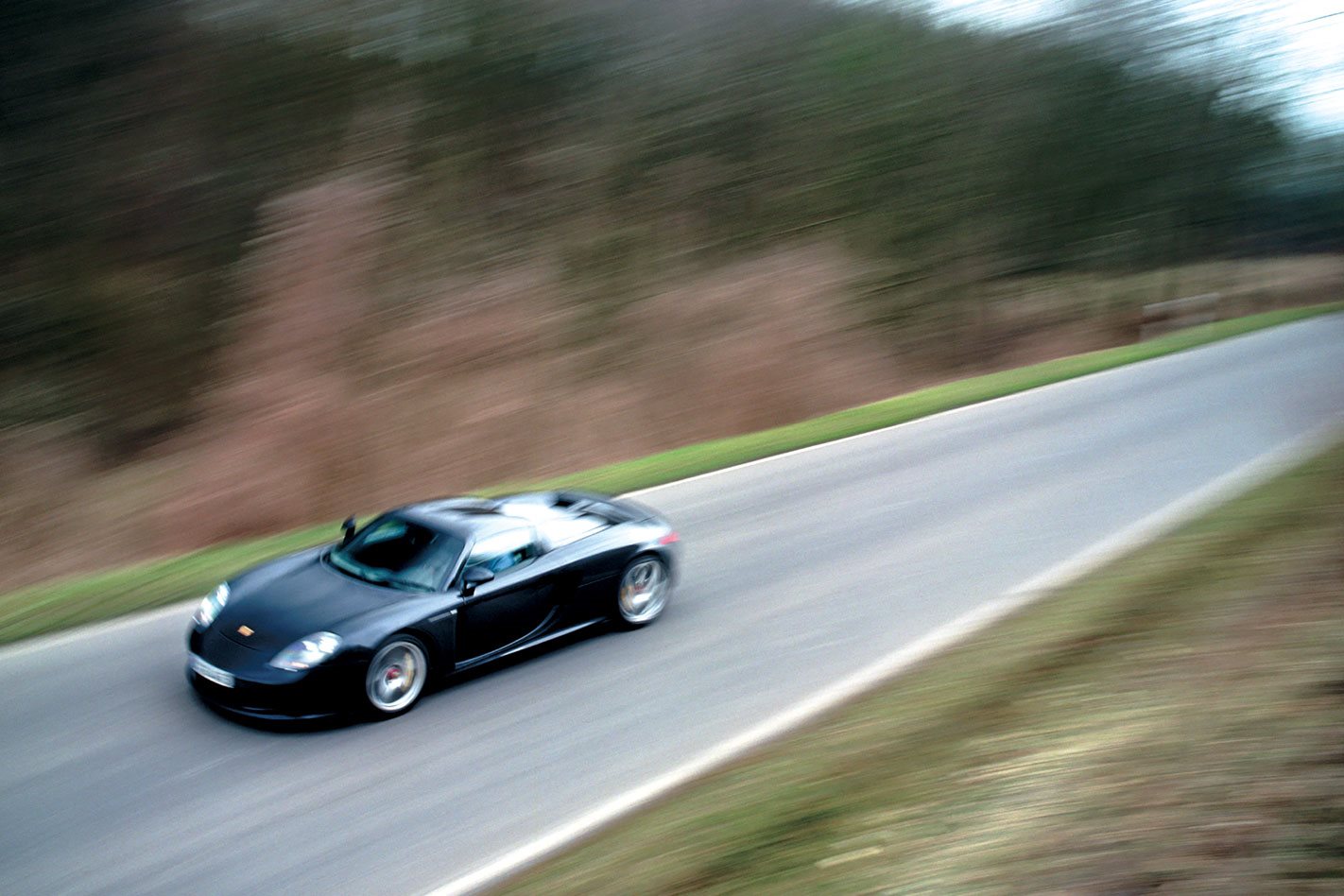 Cologne comes and goes but the next downpour turns the autobahn into a narrow lake. The single wiper struggles to remove the water from the raked windscreen and the side windows get all murky with spray and dirt. Third-gear wheelspin? No problem, as long as you don’t mind a bit of tail-wagging.

Of the Carrera GT’s many highlights, nothing shines more brightly than its V10 engine, cradled by a pair of heat-resistant carbon fibre carriers. This 5.7-litre, 40-valve unit started life way back when Porsche was still thinking about returning to F1. In the wake of the Footwork Arrows disaster, the Swabians had developed a brand-new 3.5-litre 10-cylinder engine. But instead of making a commitment to top-league motor racing, Porsche chairman Wendelin Wiedeking was more interested in repeating the last Porsche victory at Le Mans, when the GT1 took the trophy in 1998.

The core 10-cylinder powerplant of the carbon-fibre roadster, codenamed LMP2000, thus received a longer stroke and a wider bore, which boosted its displacement to 5733cc. 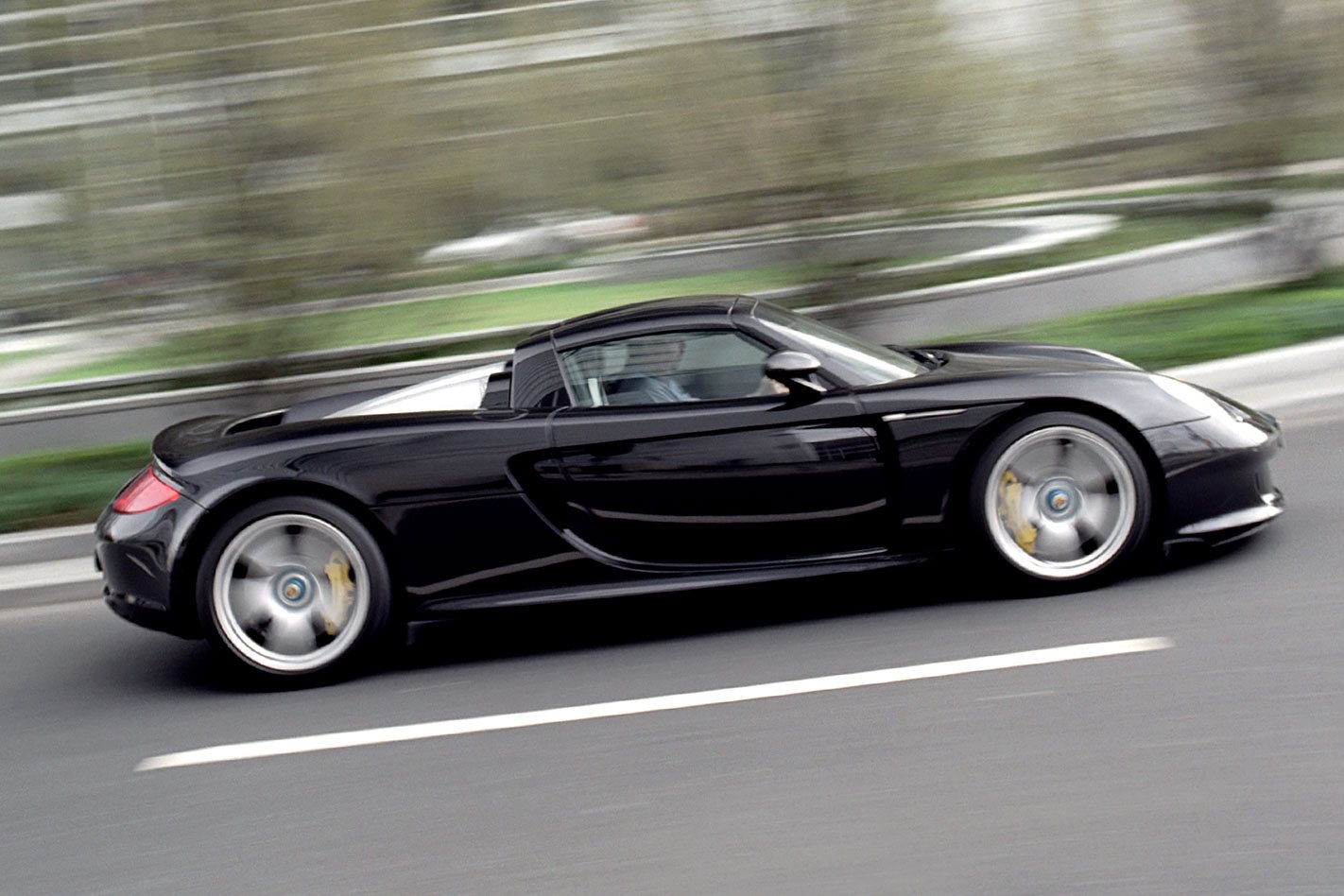 Developed all the way to its roll-out in early 2000, Porsche scaled back its motorsport investment two months later and its board decided to convert the finished competition machine into a street-legal supercar, the Carrera GT.

Producing 456kW at 8000rpm and 590Nm at 5900rpm, it fires with a melodic density, revs up the tone ladder, and swings through the gears with the rhythm of a highly focused big band.

It also whips up the performance to match its catchy engine note. On dry tarmac, the Carrera GT will accelerate in a smoky 3.9sec from 0 to 100km/h. A mere seven seconds later, you’re already flying down the road at 200km/h, preparing to shift up into fourth. At this point, your worst enemy is not an unlikely McLaren SLR snapping at your heels – but that dopey Passat which is about to pull out… 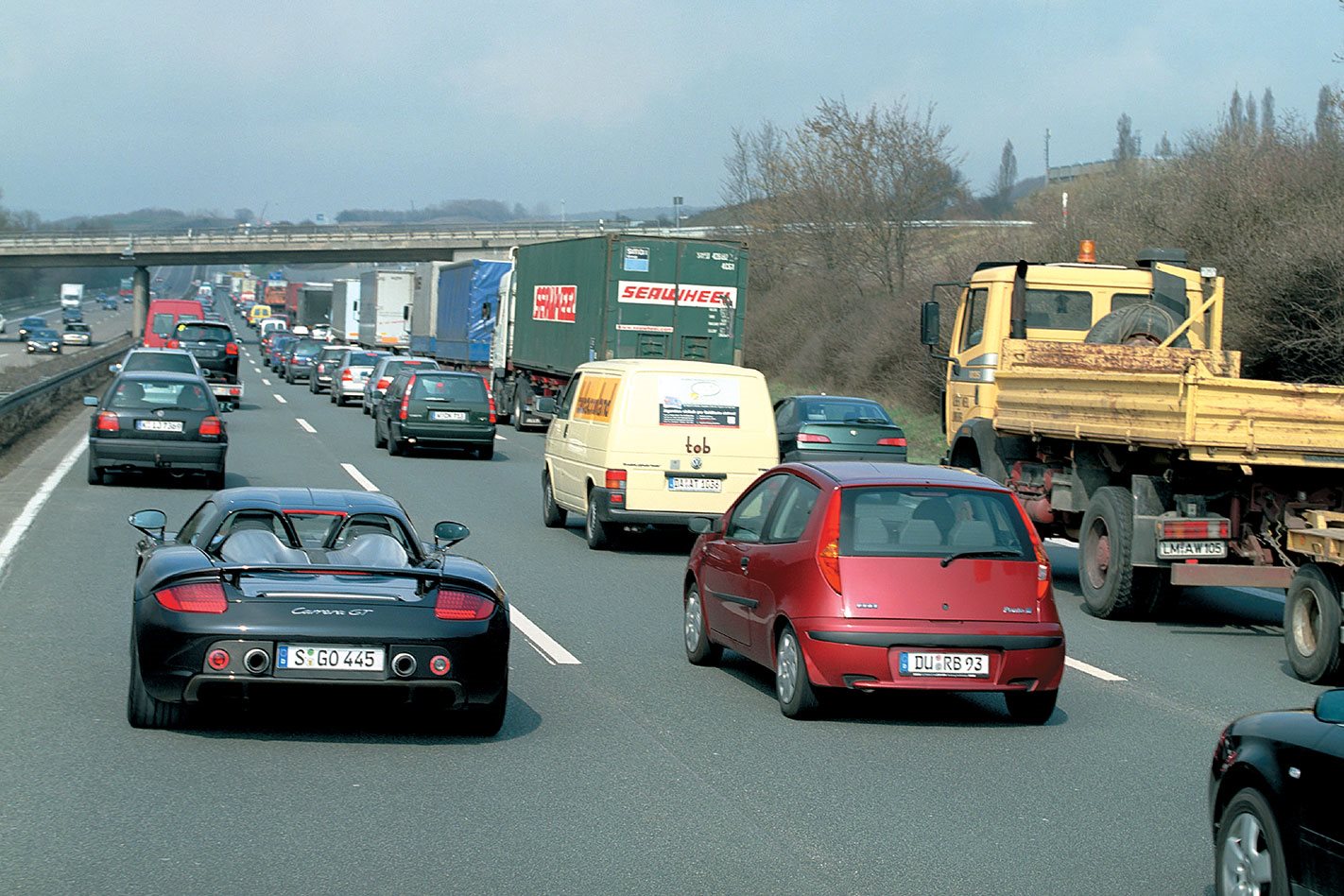 The former East’s reunification has furnished it with a brand-new network of grade-A blacktop and full-width super-smooth highways. The bad news lies in its multiplicity of radar traps. On the few remaining stretches of ancient autobahn the fun typically ends at 120km/h.

We stay the night in Weimar. Unlike neighbouring Jena, walled in by its ugly high-rises of the communist past, Weimar has preserved the charm of a bygone era. The Carrera GT, however, is at daggers-drawn with any kind of urban driving. It lacks the ground clearance required to climb into most user-friendly carparks, fouls its stiff lower lip on the mildest undulations, and its small-diameter, twin-disc ceramic clutch is a nightmare in traffic. 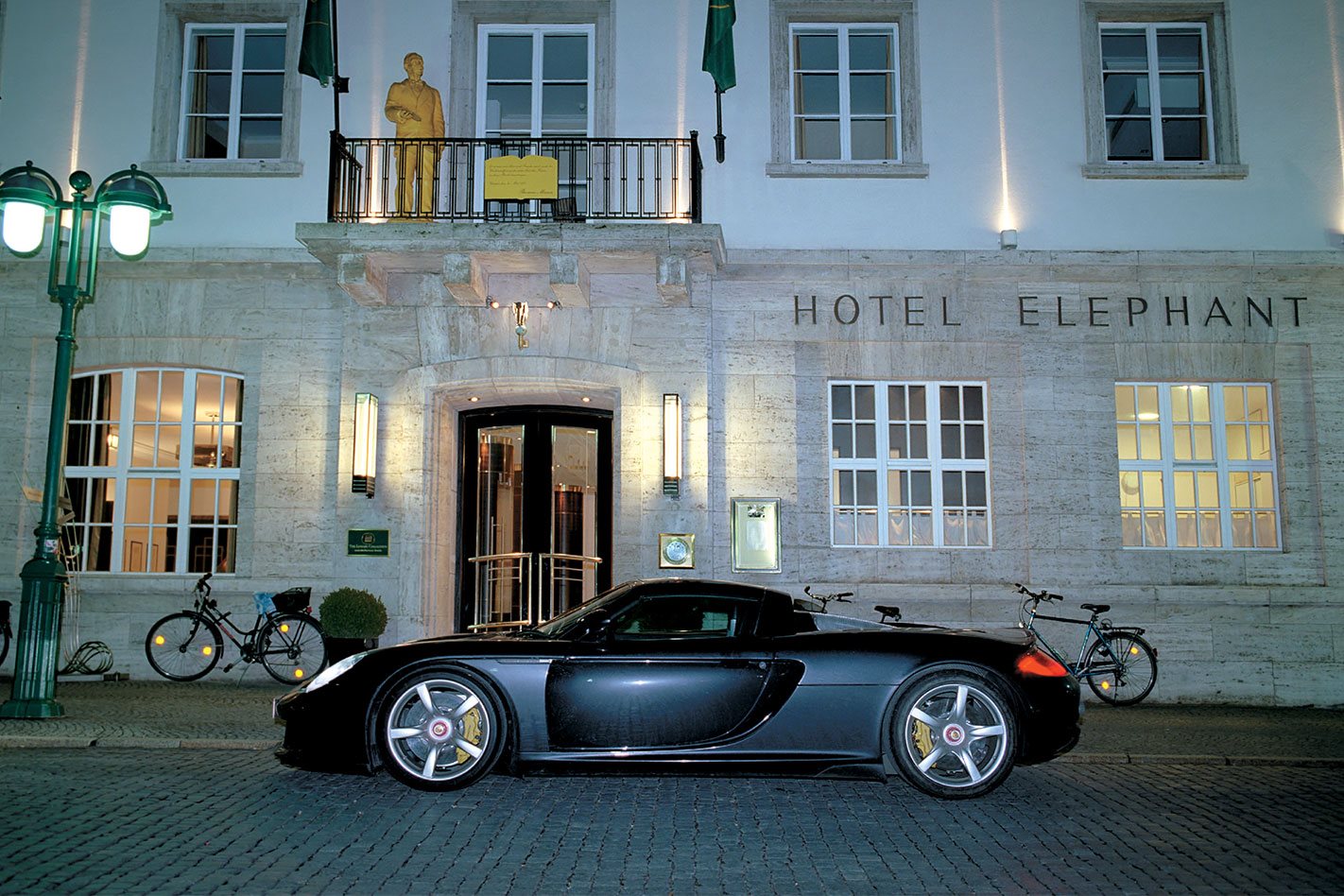 A leftover from the Le Mans project, this hyper-sensitive friction device wants to be treated with special care, and although any clutch-related headache evaporates once the car is moving, we would prefer a sequential paddle-shift ’box any time.

German punters are patriots and give the GT a big hand everywhere we stop for fuel. This Porsche has presence and turns heads on impulse. From a design perspective, however, it is very much a ’90s car. 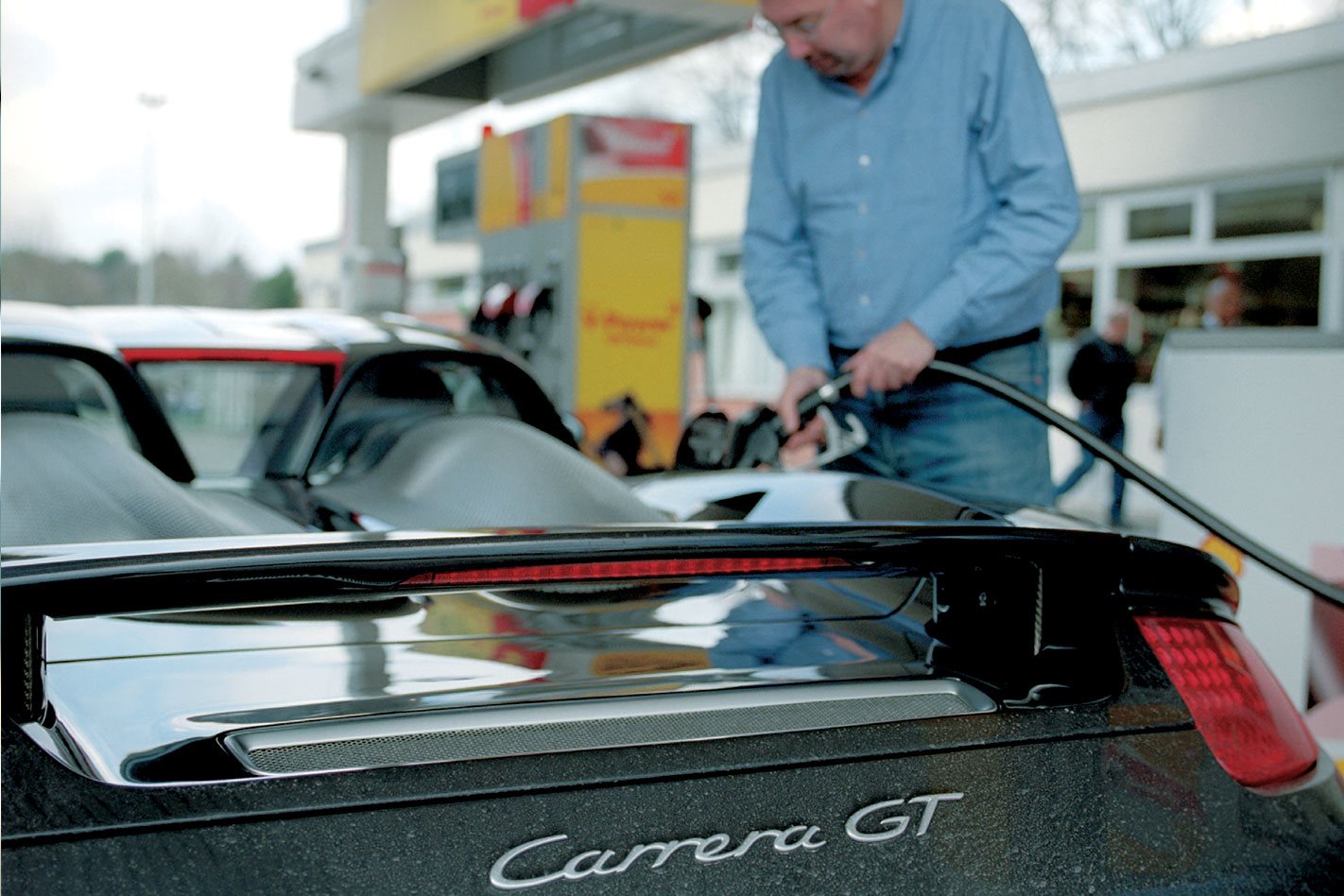 Its interior tries to be stylish, sporty and practical, but falls somewhere in between. The plump steering wheel and the overlapping instruments are too generic for a car as special as this and its tall centre-console, with the high-mounted gear-lever, is more of an obstacle than an icon.

Tiptoeing down the A9 towards Nuremberg, the rain first turns into sleet and then snow. Although traction control is a bonus, you really need stability control to suppress yaw and the latent mix of mild understeer and sudden, violent oversteer.

On a race track, the 380mm ceramic disc brakes are bound to guarantee riveting stopping power. On a wet autobahn, however, the wind and the spray cool the rotors down such that the deceleration rating must be reduced from mind-boggling to better-than-average. The centre-pedal yields about as much feedback as a piece of wood, the effort required to slow is substantial and the brake performance is somewhat tricky to modulate. But a winding country road through the hinterland soon paints a totally different picture. 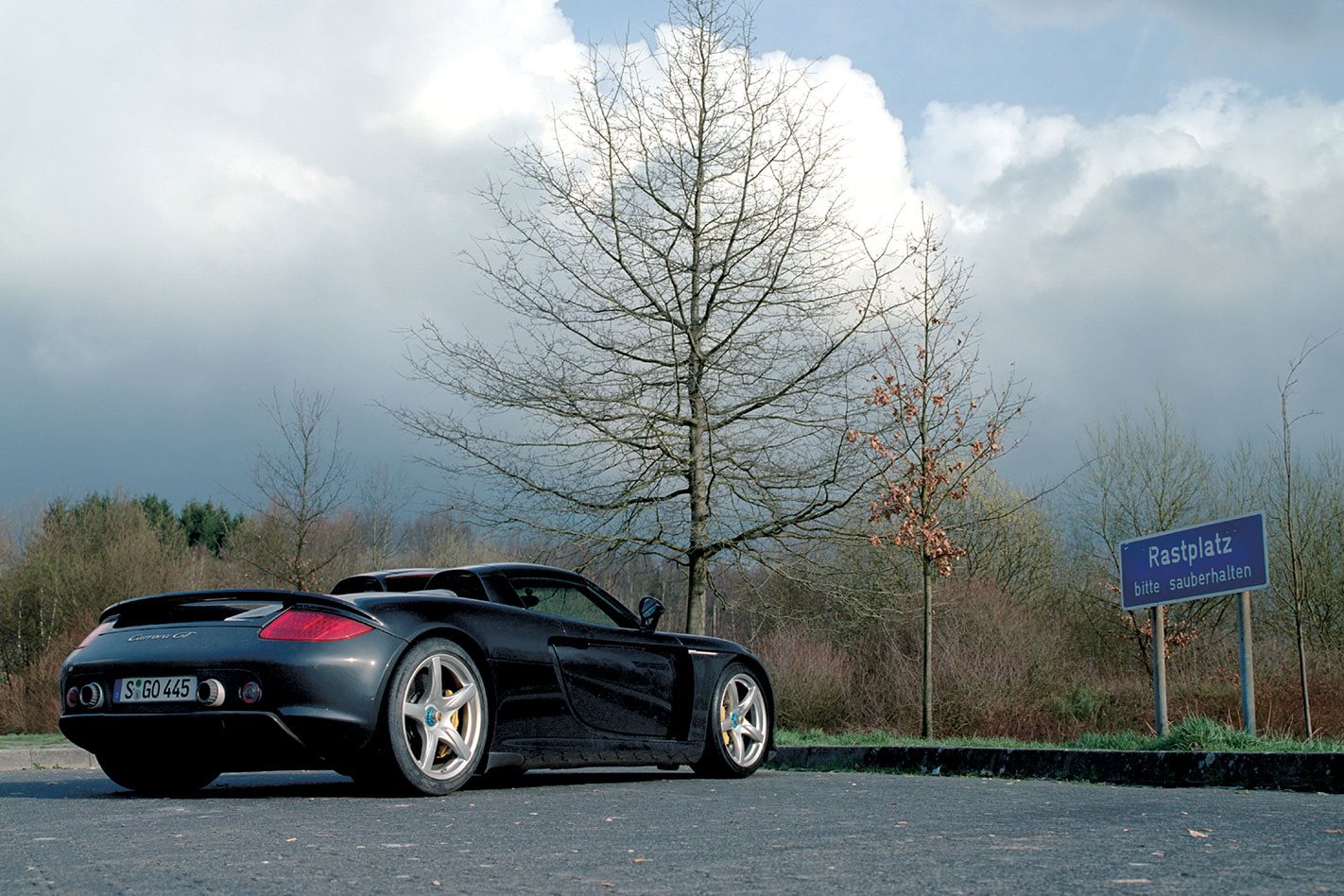 Here, the building and squashing of momentum develops an almost symphonic sequence. Putting the brakes through their paces, the Carrera GT duly decelerates with vigour and vivacity. The difference between prepared and unprepared brakes can be quantified. While minimum stopping distance on dry, high-grip blacktop is 33.5 metres from 100km/h to standstill, cold discs, pads and surfaces can push the result close to the 40-metre mark.

But if sheer speed is what counts, unlike most cars capable of exceeding 200mph, the Porsche musters a truly impressive top-end acceleration. There is no need for the motorway to stretch from here to eternity before the V10 will hit the rev limiter in sixth. The factory quotes an amazing 9.9sec for the acceleration from 0-200km/h; the 0-200-0 exercise takes a claimed 15sec flat. We can add a
hand-stopped 17.5sec for the time-warp sprint to 250km/h, which includes one more gear-change, since fourth runs out of steam at 238km/h.

There is no doubt about it: the Carrera GT is more of a street-legal race car than a race-ready road car, and this spiritual successor to the even more extreme GT1 is a remarkable tool in more ways than one. 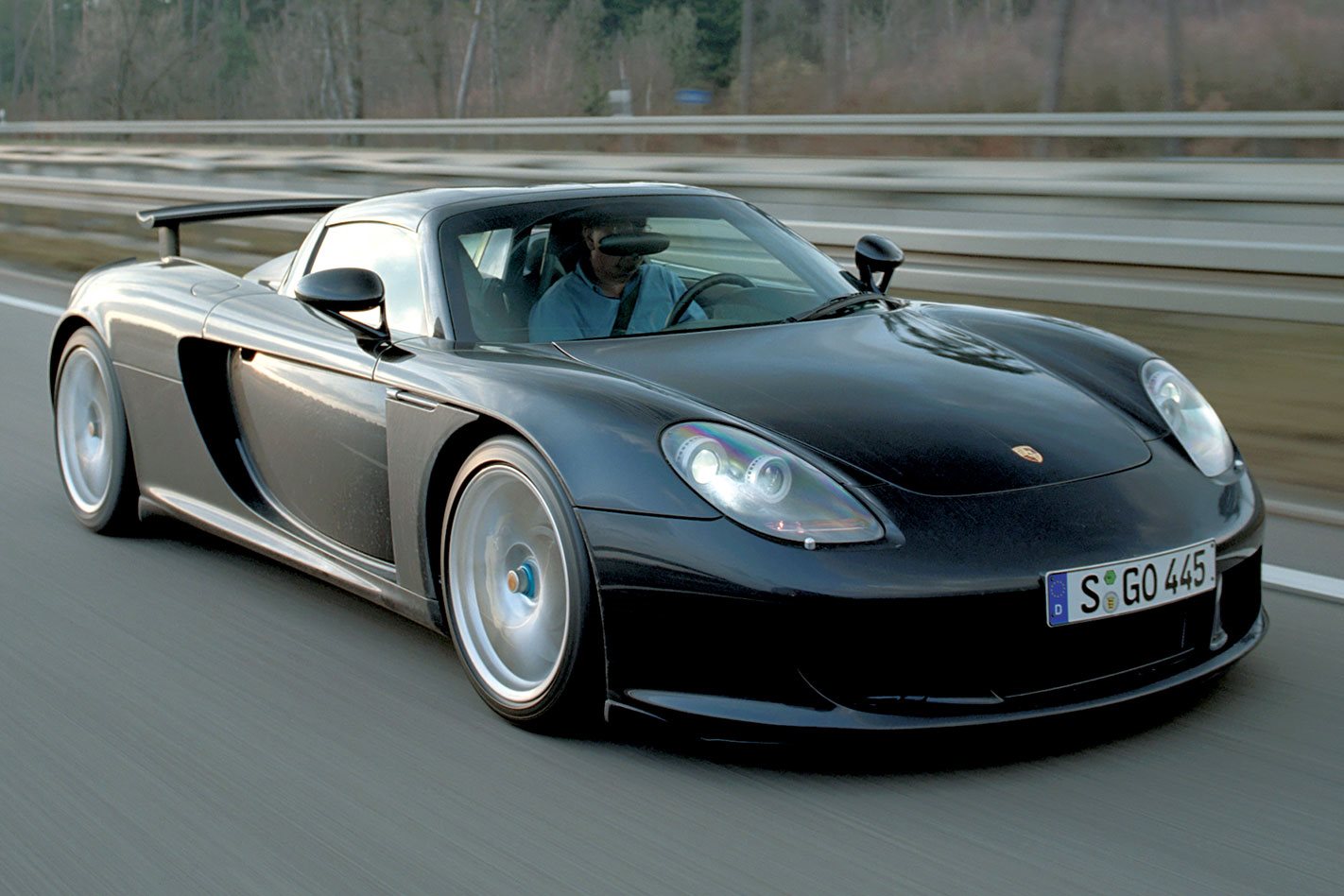 It is impossible not to love its incredible V10, the communicative steering, the competent chassis and the potent brakes (when hot). Praise is also due to the stiff, yet light, 1380kg body and its excellent high-speed aerodynamic stability (although its drag coefficient is a sub-par 0.39). The tactile controls are a joy, as is the ability to switch from roadster to coupe mode in double-quick time.

On German home ground, this extreme machine does make a certain amount of sense, because only here can one actually exhaust its remarkable potential. But on the final leg back to Stuttgart, heavy traffic is once again the main inhibitor. Even with 456kW on tap, to drive really fast in the land of the unlimited autobahn means either getting up at four in the morning or being prudent about where to drop the hammer and keep it planted.

After 31 hours and a little over 1400 kilometres, we re-enter the Zuffenhausen factory through the main gate. Soiled bottom to top, the black roadster looks as if it’s been to hell and back, and its crew is also beginning to feel the effects of the thinly padded seats and the zero-tolerance suspension. 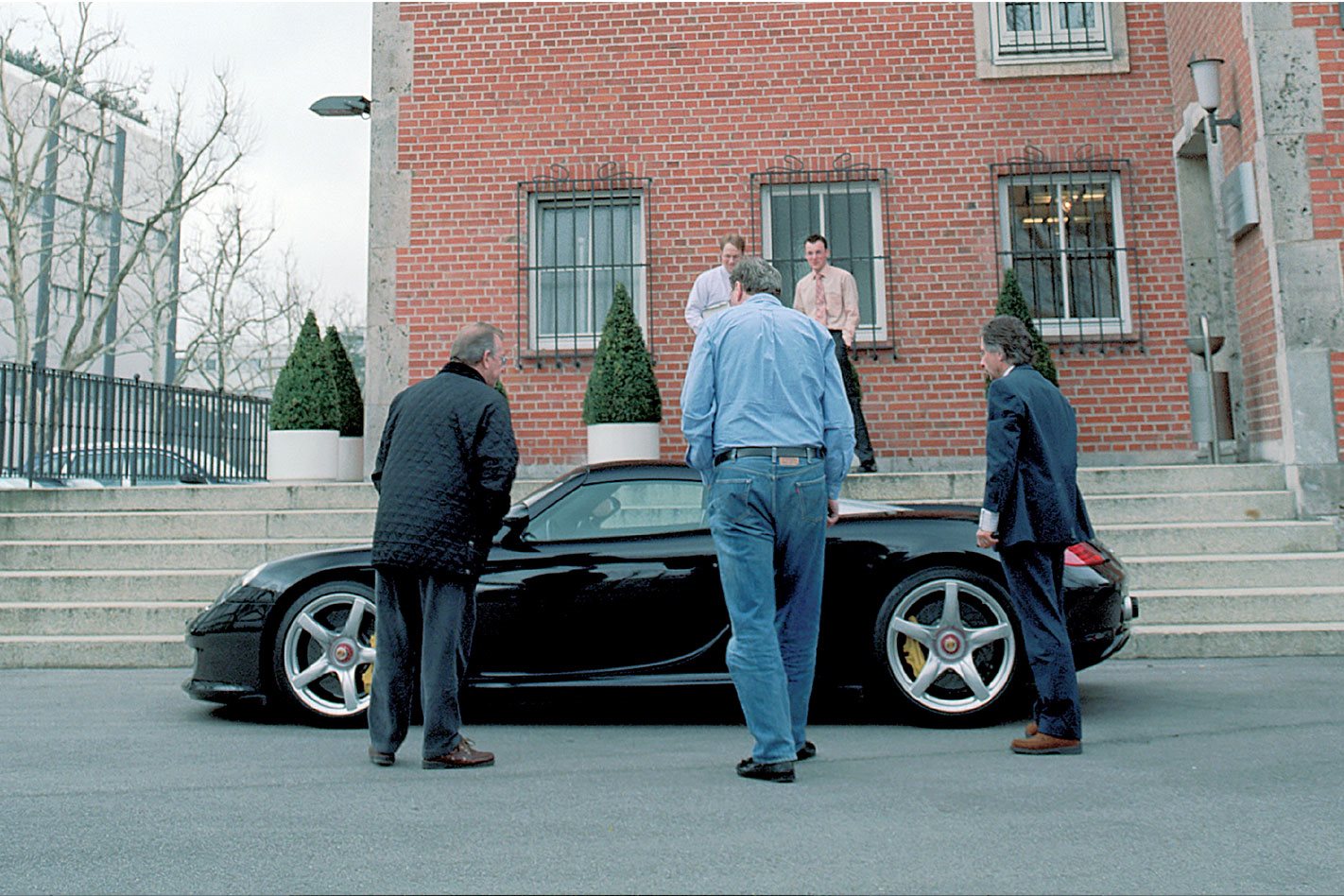 So how does the Carrera GT compare to its chief rivals? Well, it’s not quite as raw and uncompromising as an Enzo, but it is more focused, and at the same time more relaxed, than an SLR.

Evolution of the Porsche 911 GT2

Flawed as it is in some departments, this is a truly multi-talented supercar. 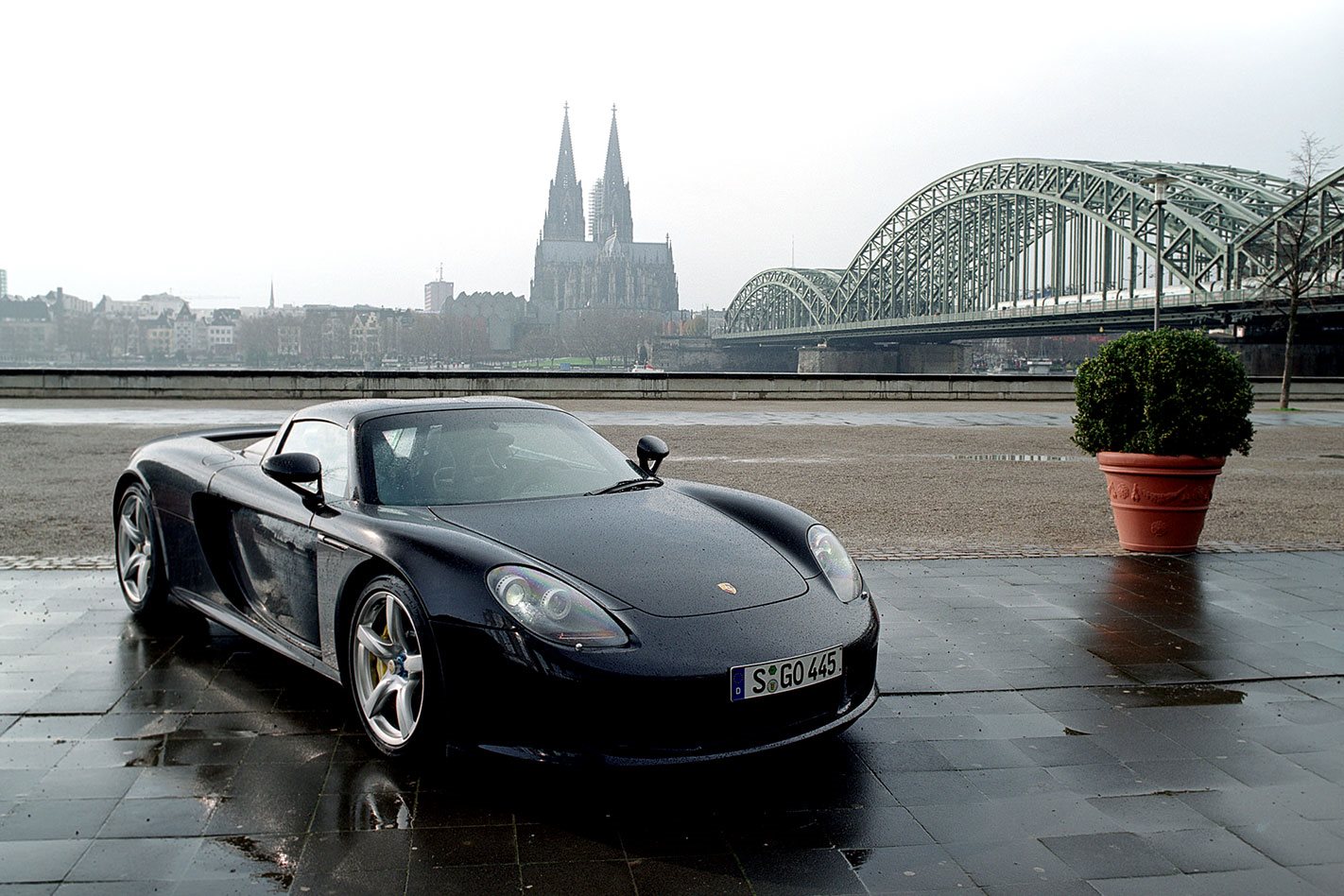 Of the GT’s limited 1500-unit run, almost all were sold within six months of the launch in late 2003. And, with just 150 vehicles still available at last count, there are clearly many who agree with us.

Although one lap of Germany was an unexpectedly physical experience, I shall always remember this crazy cannonball run for its eye-opening, mind-expanding mix of speed, involvement and capricious weather. And for the Carrera GT.

You may have spotted the different colour centre-lock nuts on the magnesium wheels. The colour coding is simply to ensure the correct nut is fed onto the proper spline. 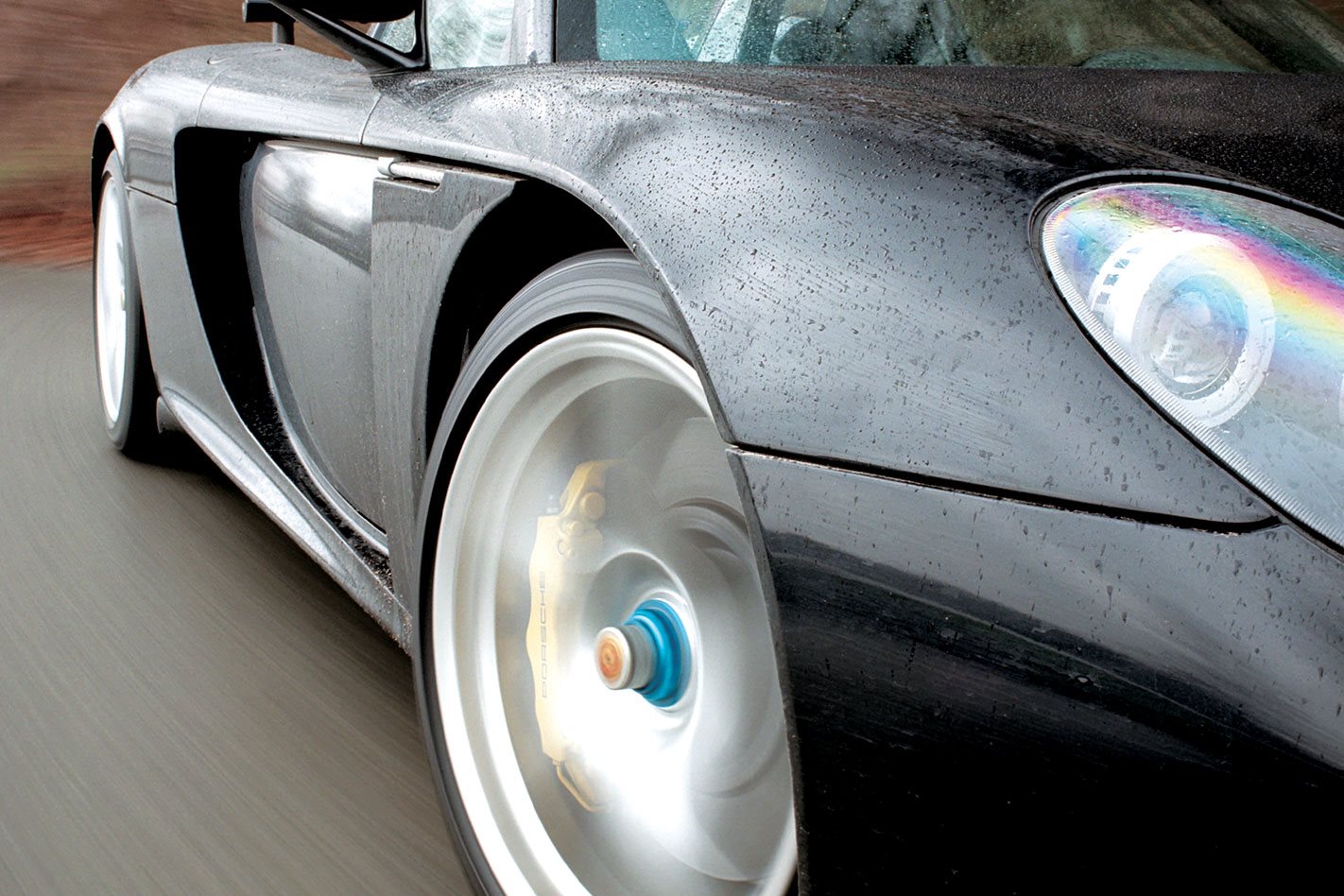 Red for the left-hand-side nuts, which feed onto a right-handed thread. The right side of the car uses blue nuts. This difference in rotation means unintentional loosening is nearly impossible, but each rim is held on with a special retaining clip just in case.

The Carrera GT’s wooden gearknob looks a bit out of place in a world of carbon fibre. But there’s significance in the palm-sized sphere of laminated birch. 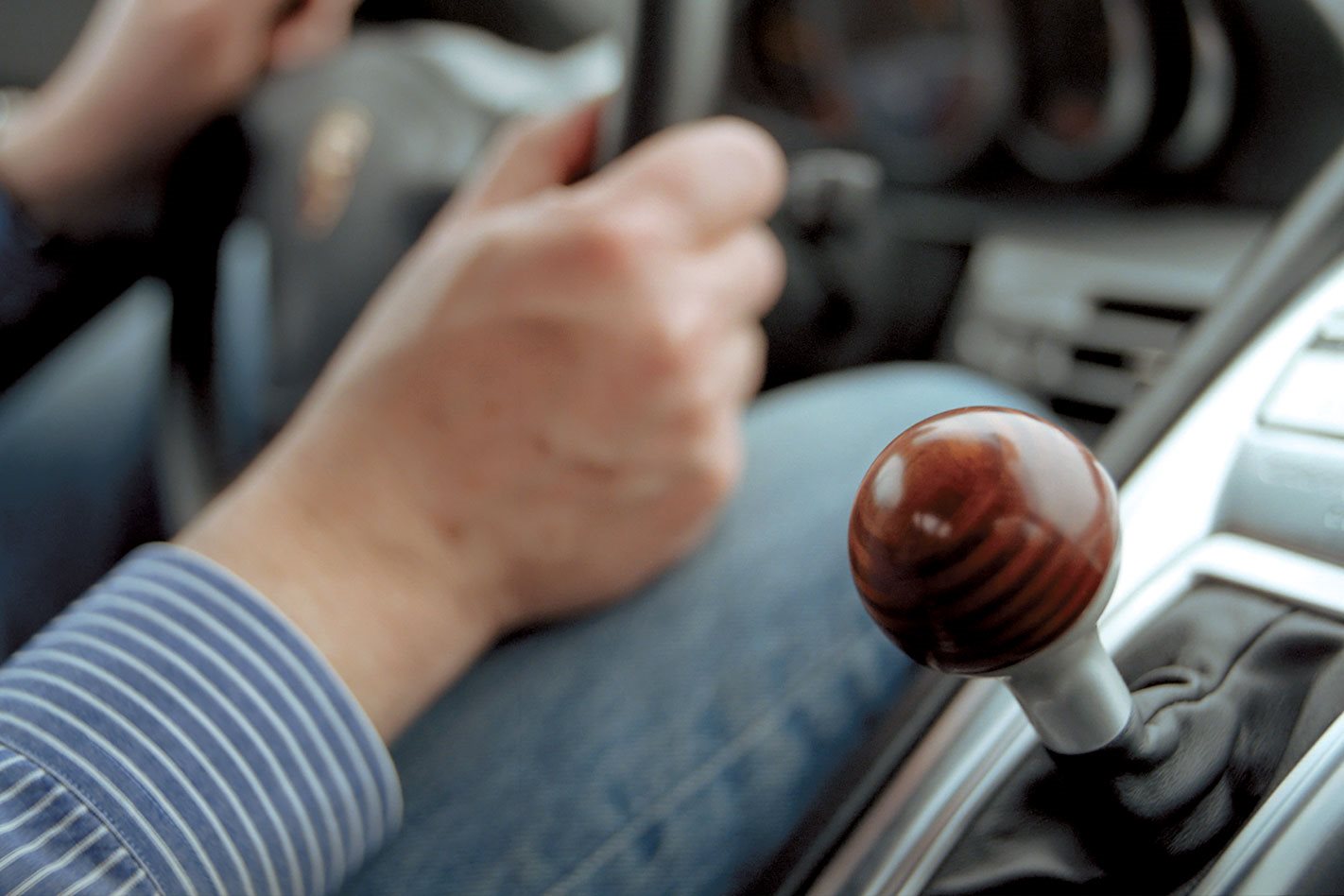 In the day’s before lightweight carbon fibre, Porsche’s thundering 917 Le Mans winner used a soft balsa wood shifter, as it was the lightest durable material on offer. 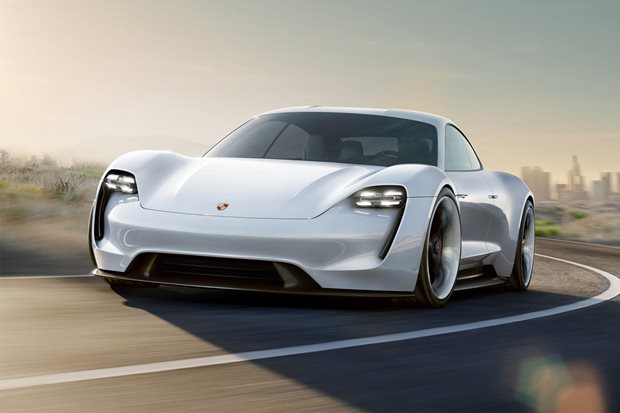 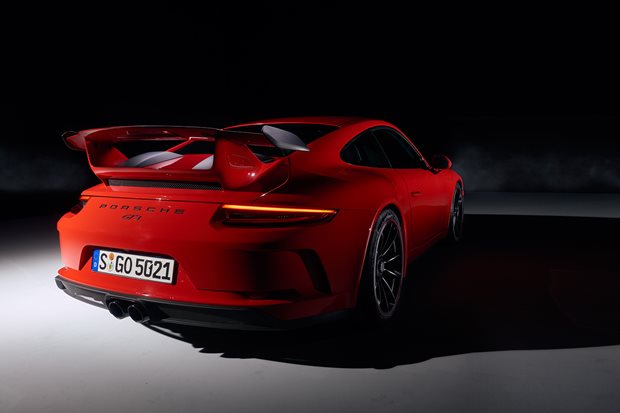 The new Porsche 991.2 911 GT3 benefits from myriad improvements, but none are as exciting as the return of the manual gearbox 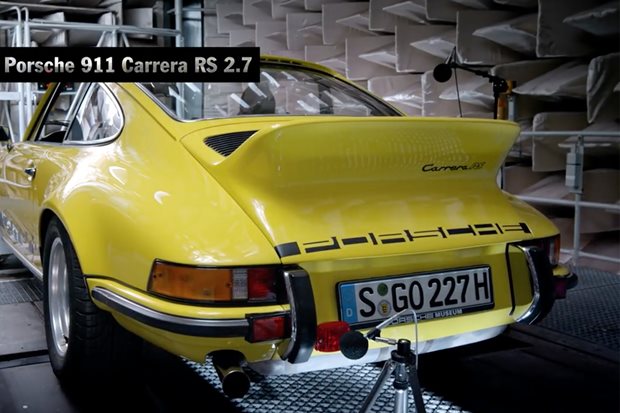 With a shriek and bellow, Porsche names its aural delights from over the years 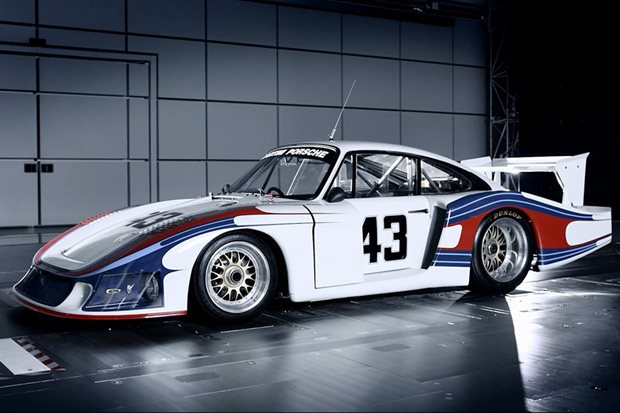