Performance station-wagons. Hmmm... a bit like Kid Rock with a gas welder. Oxy-moron, I think they call it.

This article was first published in MOTOR's Magazine November 2008.

Then again, when Audi can make a car like the V8 RS4 Avant, which was both a station-wagon and one of the finest fast cars of its day, maybe there’s hope. The latest offering from HSV, the Clubsport R8 Tourer, also suggests some light at the end of the two-box tunnel. As the name indicates, the Tourer is a Clubby R8-ified version of Holden’s SS Sportswagon. Simple, right? Er, yes, but the end result is not a car to be taken lightly. Not when it’s packing the full-welly 317kW/550Nm tune of the 6.2-litre LS3 V8 and, in the case of our test car, the six-speed manual transmission.

Throw in the big brakes, Clubsport suspension retuned for the wagon body and the (optional at $2500) 20-inch wheels and tyres and you’ve got yourself some serious hardware. And serious is the right word. A standing quarter in the 13s is the reality of it all with 0-100km/h coming up in just about five-and-a-half ticks of the Rolex (ha, bloody, ha).

Turn-in on those 20s is sharp and immediate, and the excellent front end of the basic VE suspension package is there for all to see, feel and love, too. For all that, the ride quality is better than just tolerable and only a little body-roll in corners lets you know that the super-trick Magnetic Ride Control of the range-topping GTS is missing. 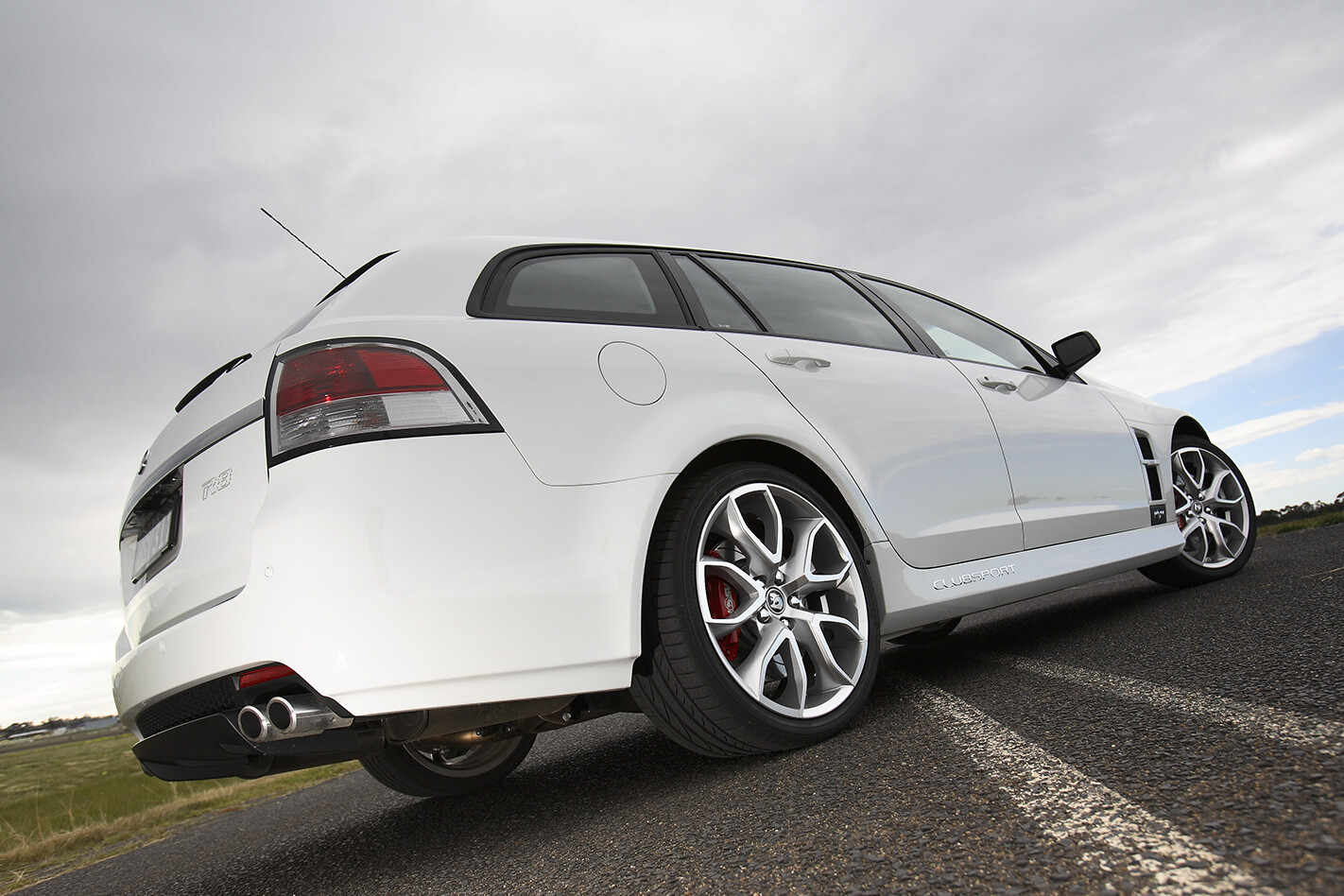 To be truthful – and it’s a great compliment to the thing – without looking in the mirrors, you’d be hard-pressed to know you were pedalling a wagon and not an R8 four-door. That’s partly because the Tourer is, unlike previous Commodore wagons, built on the same wheelbase as the sedan.

Okay, so the VE sedan is all about wheelbase in the first place, but the station-wagon no longer automatically looks like it’s headed for the boneyard, chock full of coffin and floral tributes. Nope, the Tourer is a fine-looking piece of work with the HSV treatment making the most of the sweeping roofline and slightly hunched look.

Of course, those lines have an effect on the accommodation and there’s no arguing the fact that the interior is much smaller than that of the old VZ Commodore. The load area is okay for dogs up to about Fred Basset size, but Lassie, Santa’s Little Helper and Beethoven are not going to be so thrilled about a ride to the park. You can, of course, fold the rear seats to max out the cargo bay, but that doesn’t alter the low roof and tucked-in rear corners. Other VE furniture niggles remain, too. The front chairs are just too big and flat to grab you successfully, and the rim of the steering wheel is weird in profile and plump in diameter, making it a bit squirmy in your paws.

Cosy and cosseting the overall effect is not. Despite which, you still can’t see forward properly because those Colosseum-spec A-pillars are fatter than a Minnesota debutante. But those things are not deal-breakers for most of us and, for some reason (and it could be because I’m getting old), the R8 Tourer makes bloody good sense to me.

I’d have mine with the six-speed auto mainly because a self-shifter is a no-brainer in what is otherwise such a liveable critter. That and the fact that the manual is still a grumpy old thing when you’re doing the peak-hour shuffle. 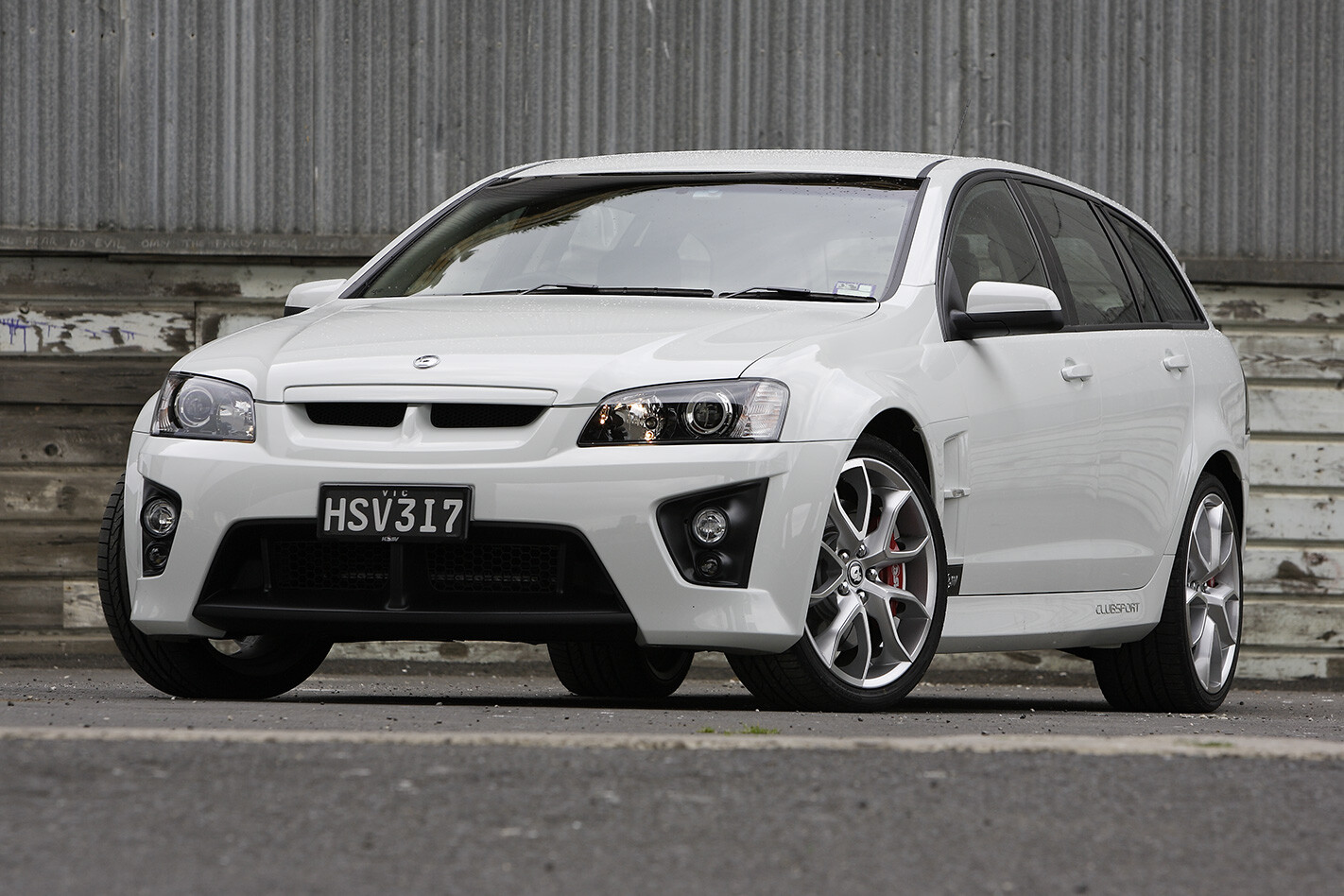 The auto adds $2330 to the basic sticker of $65,990 (a scant $1000 more than an R8 sedan) and if you’re really keen, you can tick the leather-interior box for a further $2490. I’m tipping the fuel economy might also make me grimace a bit in the long term, but hell, the Tourer is no different to a three-box Clubby in that respect.

I guess I’m just attracted to the versatility of the end product. I mean, HSVs have never really been sports cars, have they? Muscle cars, sure, but lithe little sporties? Er, no. So, if you’re going to have an HSV, why not make it the most useful, practical one you can? Why not indeed.

Oh, there’s one other thing (and feel free to shoot me down in flames if you disagree, ’cos it’s personal), but I reckon the Tourer is actually the best-looking thing HSV makes right now. There, I said it.