This feature was first published in MOTOR's May 2008 issue.

There’s no doubt about it: the Benz designers ran the scalpel extra-deep on this top-of-the-line AMG version. The new SL63 certainly turns heads, but in some respects for the wrong reasons. Despite the three-pointed star, its single-bar grille looks generic General Motors and L-shaped headlamps mean they’re no longer an exclusive CLS trademark. The cluttered chin spoiler eats roadkill for breakfast and the wannabe SLR rear diffuser is quite simply one big, ugly piece of black plastic. First impression of the car? Thumbs down. Second impression? Thumbs up. So why the flip-flop?

Because now the SL63’s engine has fired and we’re moving. Promising intake rasp, serious punch, awesome transmission and better than expected ride. This is going to be fun. It’s still flat-out on any autobahn you pick, unless posted otherwise. Stuttgart to Munich is a drag on the main A8 thoroughfare where 120km/h is the limit during the day. At night, anything goes. But I prefer the link via Ulm, which throws in breathtaking scenery as a bonus. The route via Switzerland would have been 300km shorter, but the $50 Swiss autobahn toll is blatant highway robbery; there are plenty of speed cameras and the Swiss cops are strictly enforcing a 75mph (121km/h) motorway speed limit … not exactly the ideal habitat for our big bad Benz powered by AMG’s 386kW 6.2-litre V8.

That’s why we stick to the German through roads, via Garmisch, which are thankfully almost empty this morning and, after only 275 kays, this also applies to the fuel tank. It confirms our suspicion that the variation between suggested and actual consumption can, in the case of the SL63, be 100 percent. The test car’s consumption over the trip worked out at 16.8L/100km. It had nothing to do with driver discipline or a green conscience. Now that both the French and the Italian authorities have started impounding vehicles caught travelling at more than 200km/h, one often has second thoughts about flooring the loud pedal… 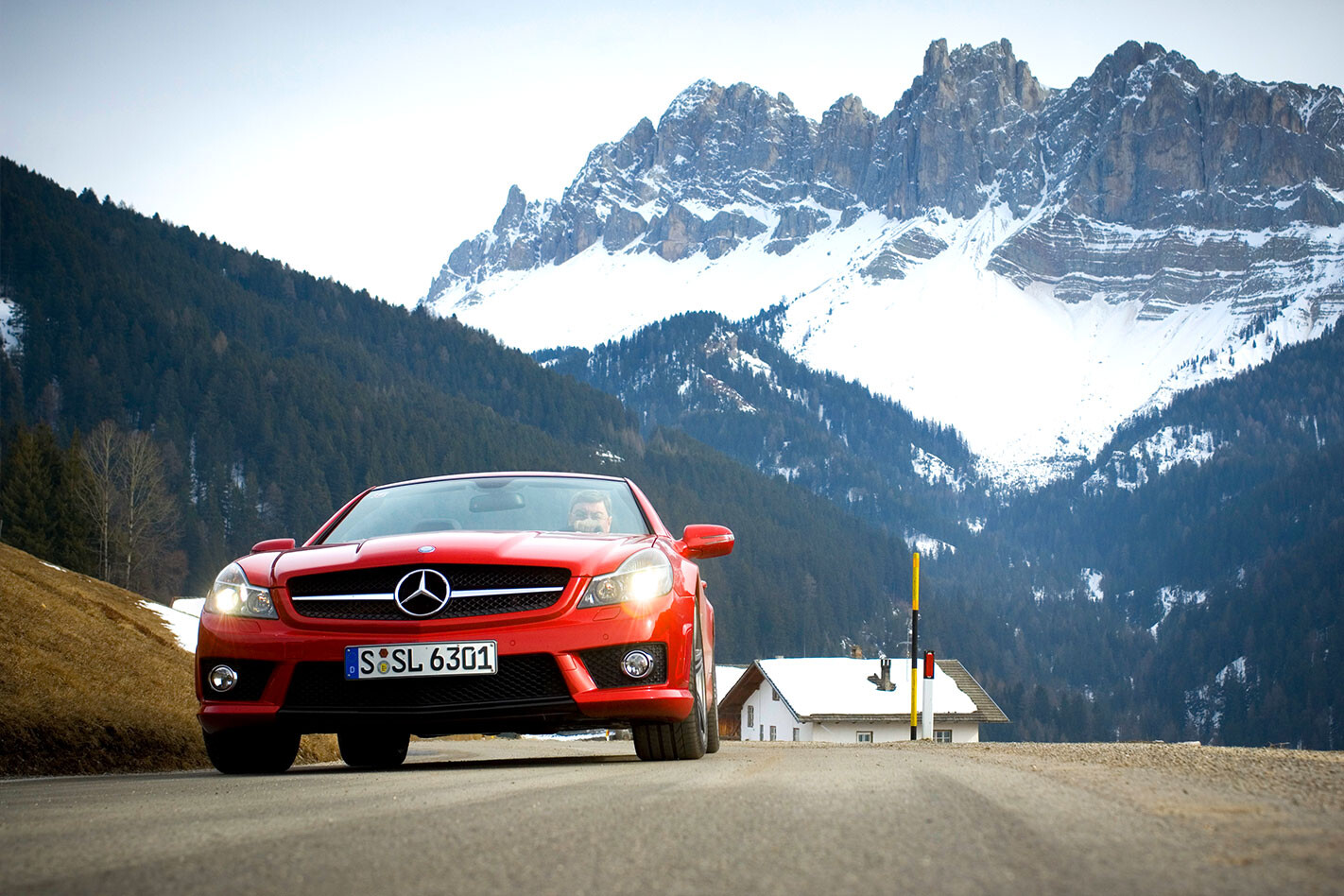 Lunchtime, Innsbruck Austria. Touted as the capital of the Alps, Innsbruck is a mix of gothic and baroque architecture, centred by the Golden Roof – a building boasting a three-storey balcony built by Archduke Ferdinand IV in the 15th century. Austria is a great country with great roads and not many stationary radar traps either, but their solid law-enforcement makes their police seem the kin of the American State Troopers.

It is here that we devise a plan: instead of tip-toeing down the Brenner Pass in convoy with trucks and holiday traffic, we take a scenic shortcut through the Dolomites into Italy. In summer, once the snow’s melted, the most awe-inspiring link from Tyrol to Northern Italy is the Timmelsjoch Pass. It’s a drifter’s paradise with little traffic and downhills that test brakes and courage. 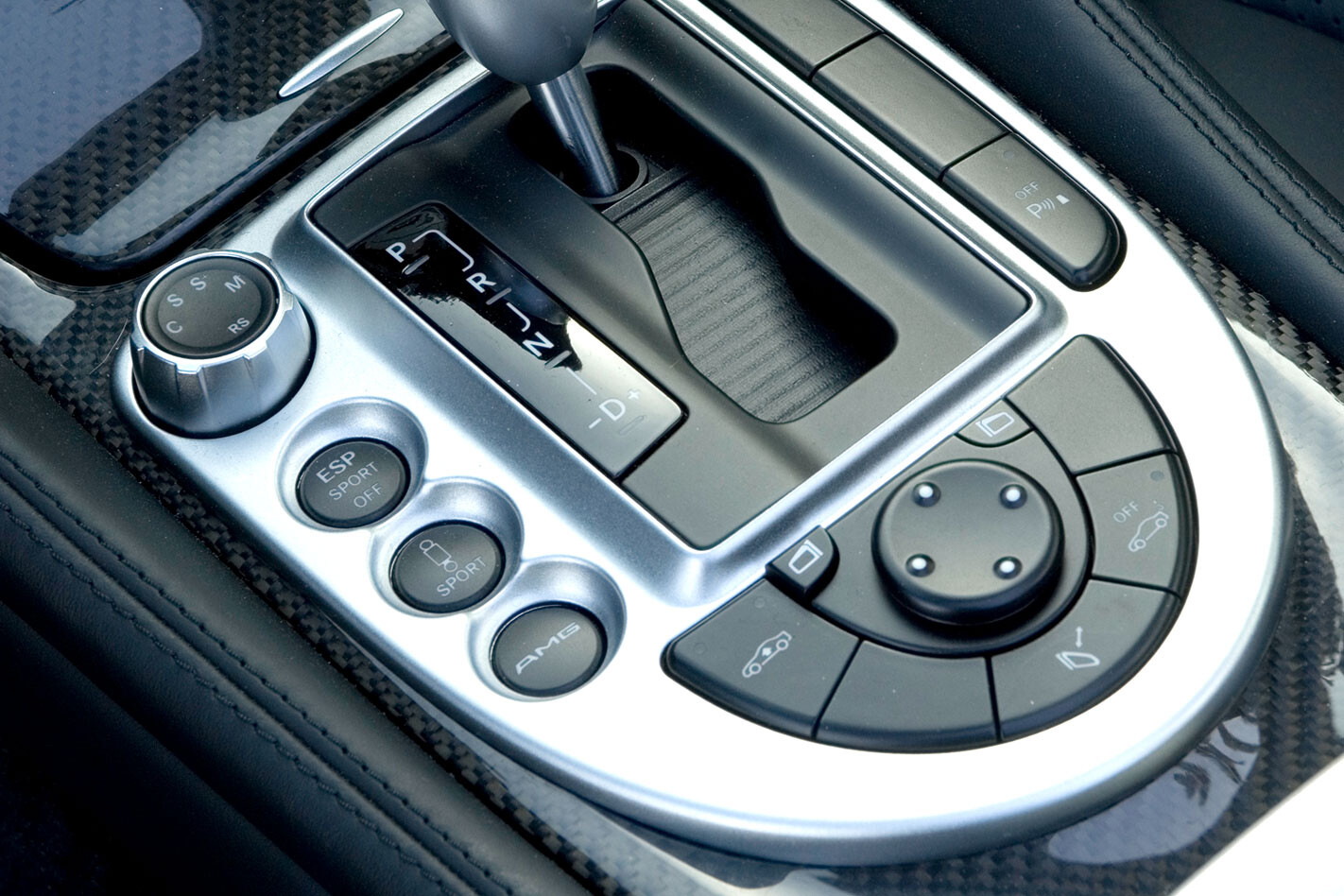 These famous sickbag passes are in fact the perfect playground for the new AMG Drive Unit. The what? The Drive Unit is a small knob next to the shifter which controls the state-of-the-art seven-speed MCT gearbox. MCT? Multi-clutch technology; that’s AMG-speak for a low-inertia, high-efficiency wet clutch that replaces the torque converter. The Drive Unit lets you choose between four different modes labelled C (comfort), S (sport), S+ (sport with anger) and M (manual). The C is fine for stop-and-go traffic but too slow and relaxed anywhere else. Mode S speeds up the shift times by 20 percent, but what you really want is S+, which is a further 20-percent faster than that.

The most radical of the MCT settings is M. It holds the selected gear no matter what and is almost brutal in the way it juggles the ratios before flashing a mighty red warning light as the V8 approaches its 7200rpm redline. Unlike the pleasantly straightforward C63, the SL63 is the exact opposite of the one-setting-fits-all philosophy. Therefore, next choice this Benz wants you to make is the suspension setting. Is it C for compliant or S for stiff? While you’re at it, ESP begs to be calibrated, too. Previously, it was either on or off, but now ESP Sport gives the hooligan inside you a little more room.The next option is Race Start, which everyone else calls Launch Control, closely followed by the mysterious AMG button that will store your favourite transmission, stability control and chassis set-up. In our case, it memorised S+, ESP Sport and ABC (active body control) in S.

All it needs now are personalised intake/exhaust melodies, a burn-out program and an in-dash drift recorder with slide angles and a spin-out danger meter to the HUD… 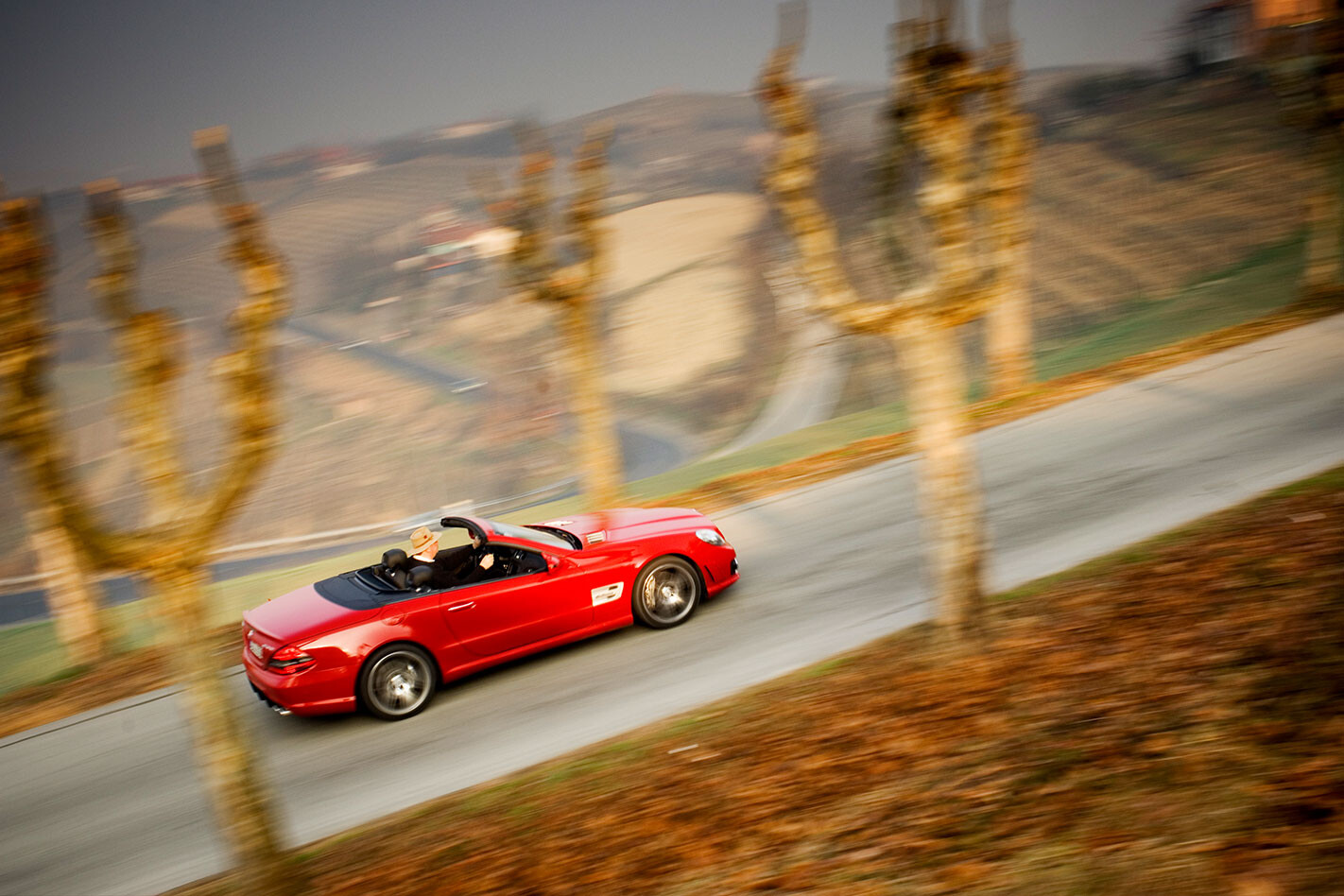 Now limited to 100km/h all the way from Brennero to Bolzano, the first segment of this autostrada used to be a real-life test bed for car manufacturers with its harsh gradients, tight twists, dynamic surface irregularities and wayward trucks. It’s still a test of chassis and driver. If we had time, though, I’d rather have taken one of the various other routes, like the Brescia-Alessandria link. The best part is the wild Ovada-Varazze descent – where only the brave need apply.

Autostrada Verona-Brescia, late afternoon. After 2987 emphatic direction changes, the head of the driver glows like the sunset we are about to relish. In pale contrast, the photographer’s complexion radiates that typical grey and dingy haze that surrounds the Po River – Italy’s longest.

Just as well Mercedes-Benz sent along a chase car with four fresh tyres. After all, the rear Michelin Pilot Sport Cups left plenty of signature marks on the yippee hairpins, the glorious second-gear esses and the wide-open third-gear sweepers. ESP Off is the obvious choice on this turf, although for maximum results and minimum damage you definitely want the road to be wide and the bends to be wide open. And where else but Italy do the Polizia pull over and wave you through with a double thumbs-up? Extra money buys the AMG Performance Package with bigger brakes, a rear differential with a more aggressive 40-percent locking ratio, track suspension, race steering wheel and different cast-aluminium alloy wheels shod with (unchanged from the SL55) 255/35R19 tyres in the front and even fatter 285/30R19 software in the rear. We’d only take the enhanced traction diff and the larger-diameter front rotors. Although the SL63 AMG comes across as a compelling mix of sprinter and long-distance runner, in some disciplines it’s overshadowed by the SL55 AMG Kompressor it replaces (see "Bye Bye Blower" below). The high-revving, normally-aspirated V8 doesn’t quite match its predecessor in terms of torque (630Nm at 5200rpm versus 720Nm at 2600rpm), acceleration (0-100 in 4.6 against 4.5sec), official consumption (13.9 versus 13.5L/100km) or price (the 386kW 2008-model AMG is expected to be about $5000 more expensive). However, the SL63 performs over a wider rev band, it uses less juice when pushed really hard, and it responds more eagerly to throttle orders.

It’s not really the engine that makes the difference though. Instead, it’s the much more versatile and competent gearbox that scores full marks, while the updated chassis earns the latest AMG roadster a small but quantifiable edge in handling, roadholding and ride comfort. Credit, we find, is due to the magic transmission that automatically blips the throttle during downshifts and can slip from seventh into fourth or from fifth into second without ever dropping a cog. Praise also goes to the neatly balanced, tarmac-hugging ABC suspension, the reassuringly powerful yet easy to modulate 19-inch brakes, and the meaty steering which is stoic enough to hold course at 250km/h and quick enough to catch that notoriously wayward tail.

Instead of darting through darkness with eyes wide shut, we stop for dinner, bed and breakfast near the French border, high up in the hills above Ventimiglia. Over a bottle of Brunello or two, the crew is in no hurry to weigh the SL63’s pros against the cons. On the should-do-better list, we note the obese kerb weight (not much change from two tonnes), the considerable high-speed thirst, the increasingly complex ergonomics (the SL must still do without the single Comand controller), the relatively tight packaging for occupants and luggage, the noisy but not particularly talented voice of the big-bore engine and the rather loud AMG livery. The French have eclipsed the Swiss as far as the number of fixed radar traps per kilometre of autoroute is concerned. Installed in the median, the grey boxes are easy to spot, but there are so many of them that all but a few locals have collectively given up and refrain from speeding. Incidentally, this attitude now prevails in Italy where a new network of overhead galleys with inbuilt cameras has tempered the right foot of the nation. Here’s the good news: the coastal autoroute/autostrada between Genova and Nice is virtually uncontaminated, so you can go flat bollocks through all those magnificent tunnels, the window wound half down, the throttle pressed half open. It’s a treat, and chances are you’ll even manage to keep your licence.

Friday lunchtime, al fresco at the Rascasse restaurant in Monte Carlo. Two happy sun worshippers are keeping a watchful eye on their chariot which hums an end-of-journey kerbside tune – exhaust crackling, engine sizzling on and off like an invisible jazz brush, leather and plastic audibly expanding and contracting at random. 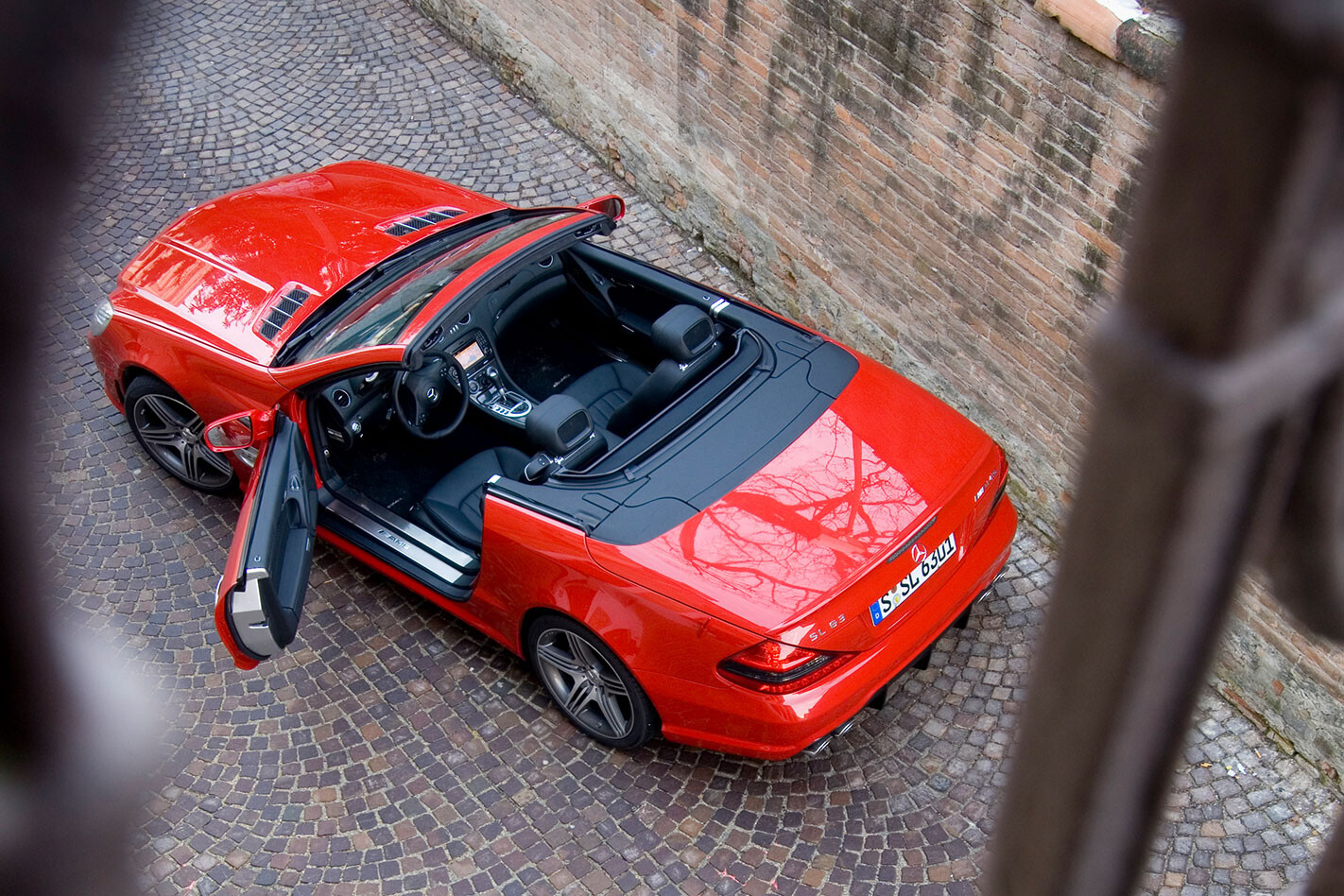 It’s a great roof, this 16-second folding hardtop, because it anoints the SL with instant Grand Touring status. With the pavilion in place, the two-seater Merc acts as a professional all-weather coupe. As soon as the panels disappear (reducing boot capacity from 339 to 235 litres), it morphs into a hardcore roadster which is ready to snap at the heels of any supercar.

We could have, quite frankly, done without this facelift, and we simply cannot fall out of love with the 5.4-litre Kompressor overnight purely to embrace the new 6.2-litre unit that has replaced it. But on aggregate points, on all-round talent as well as on universal appeal, the SL63 AMG is indeed a step forward in the colourful history of the iconic two-seater Mercedes sports car which, long, long ago, stopped living up to its ‘Super Light’ moniker.

When Mercedes-Benz launched its SL55 AMG hot-rod back in 2002, it created a sensation. Not only did this supercharged monster produce 368kW, but the thought of 720Nm impacting at just 2600rpm made your neck hairs stand on end. And the sound; the most anti-social, hellishly wicked V8 blare loads of money could buy ... from a Mercedes! 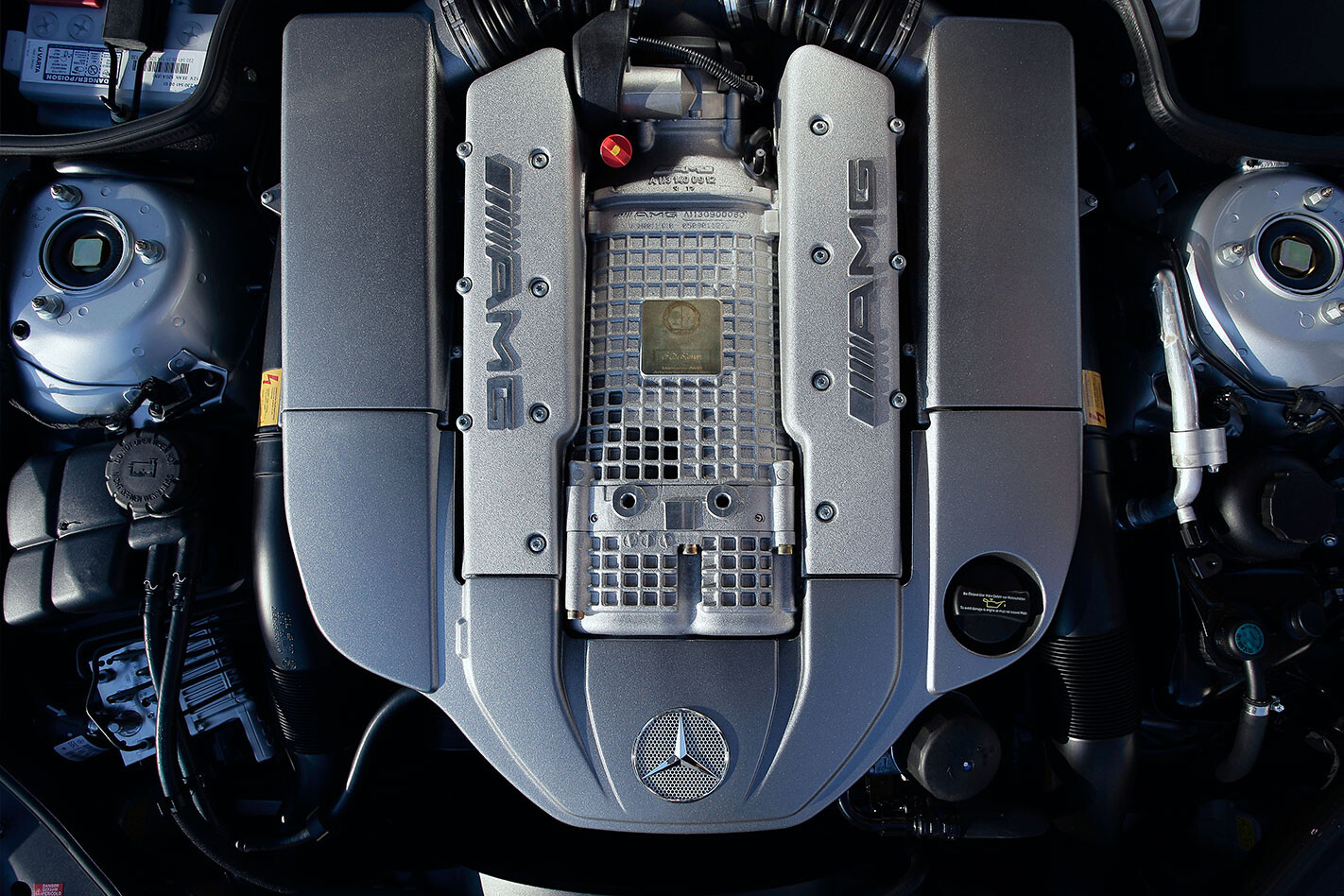 The first one did 0-100 in just 4.7sec, but a later update realised 380kW and 0.2sec less to the country-road speed limit. AMG’s new 6.2 V8 is a great engine – more progressive and easier to drive hard than the old Kompressor – but it’ll never match the blown V8’s drama. 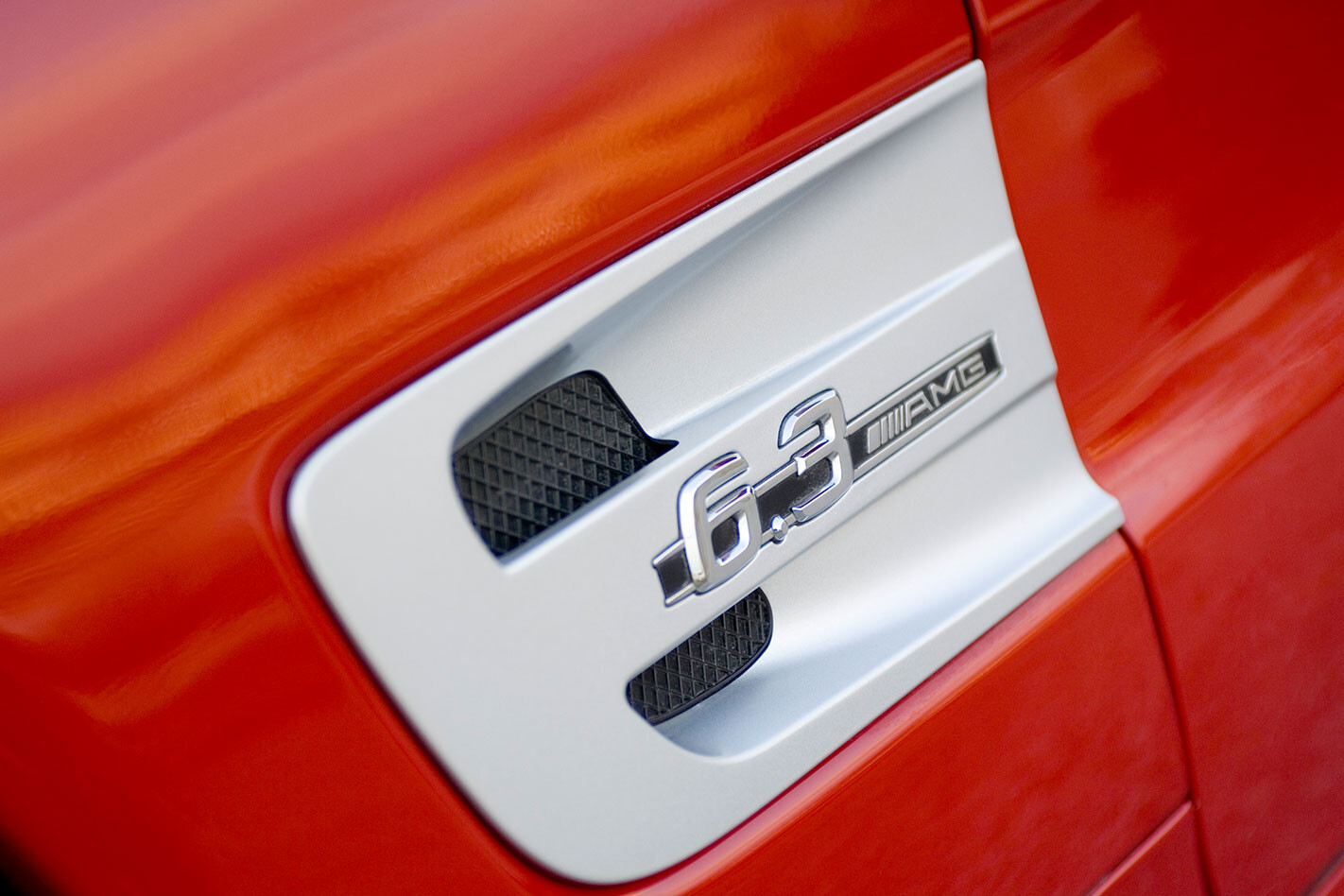