There was a time towards the end of last decade when it looked as though the dual-clutch transmission would take over the world.

The popularity of the automatic gearbox was – and still is – on the rise, and the double-clutch seemed to deliver everything a driver might miss from a manual, and the convenience of a slush-box, without any of the inefficiency or the inherent lack of sportiness.

Curiously, though, in the years that followed, the car industry took divergent paths for best power delivery, such as the CVT and robotised manual. Mercedes-Benz, meanwhile, largely stuck with the traditional auto.

Now, the average auto by this time was much less a ‘slusher’ than those that had gone before. High-percentage lock-up torque converters have minimised loss reductions to bring the auto much closer to the manual in terms of efficiency.

This could certainly be said for Merc’s world-first seven-speed automatic, the 7G-Tronic, which had the ability to lock up the converter in every ratio.

This, though, wouldn’t be quite enough for a high-performance car, where crisp, immediate tip-in response is a must – certainly not in the context of AMG’s dual-clutch Porsche and BMW M rivals. Enter the Mercedes-AMG MCT transmission, which is essentially the 7G-Tronic ’box, but for an important distinction: a compact wet start-up clutch replaces the torque converter as the coupling between the engine and the transmission.

The reasons Mercedes took this path are manifold. The dual-clutch gearbox had by this stage proven itself to be less than bulletproof and, in low-speed manoeuvring in particular, less than smooth, with some brands, installations and calibrations being better than others.

Like any good auto, the wet-clutch-equipped 722.9 transmission (as Merc calls it) has refinement and shift smoothness sorted, and with the benefit of decades to prove the design principle, should deliver long-term durability, too. As long-established Benz pillars, these two qualities were hugely important.

The start-up clutch would give it dual-clutch-beating initial response, and the multiple lock-ups would ensure low in-gear transmission losses, too.

Then there are the distinct driving benefits a conventional auto offers. The dual-clutch auto, by design, is a sequential transmission. That is, you have to go up and down the ratios in their numerical sequence. Granted, the typical double-clutch auto’s shift speed means it doesn’t take long to slip through a few ratios. The auto, however, makes it possible to skip directly to your desired gear ratio, provided the road and engine speed parameters line up. 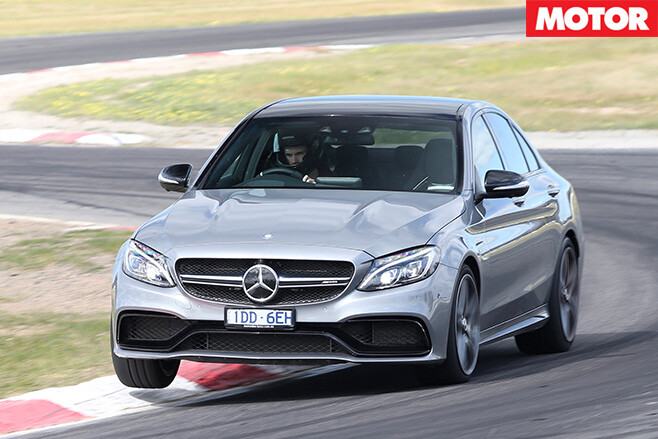 There’s also zero interruption in power delivery with an auto. Again, while a dual-clutch is quick, there is still a short period where power is not being transmitted.

Incidentally, Merc claims the MCT takes 0.1sec to shift, which is about five times quicker than a good manual gearshift, but about twice as long as a supercar-grade dual-clutch gearbox.

1. AUTO START
General Motors gave the world the first mass-produced automatic with 1939’s Hydra-Matic. Meanwhile, in a nod to its old-school origins – or more likely for practical reasons – the 7G-Tronic transmission is built at the Mercedes-Benz Stuttgart-Untertuerkheim plant in Germany, the site of the original Daimler-Benz production facility.

2. WELL-OILED MACHINE
The Mercedes-AMG MCT swaps the conventional torque converter for a multi-plate wet clutch. The unit consists of several stacked clutches in an oil bath, and allows features you can’t have with a conventional auto, such as double-declutching and a Race Start launch control mode, which revs the engine and lets the clutch out sharply to optimise standing-start acceleration.

3. SMOOTH STARTER
Along with a conventional auto’s smoothness and durability benefits compared with a dual-clutch auto, the MCT offers a pair of reverse gear ratios. With the extra ratio, the Comfort mode sees the transmission start in second in both forward and reverse, allowing the sort of relaxed, slip-free starts that would otherwise be difficult in Benz’s big-capacity, high-torque turbo machines.