WHAT IS IT?
This is the third generation of the Audi TT, but only the second time Audi has released a sportier TTS variant. It gets a more powerful engine tune, firmer suspension and extra equipment inside and out to suit its more dynamic nature. The Audi TTS is available in both coupe and roadster body styles.

WHY WE'RE TESTING IT
The TTS has arrived in Australia, and we're keen to see if the third-gen TT's sharper, more driver-oriented focus has allowed the TTS to become an exciting model in its own right.

MAIN RIVALS
Realistically, the Audi TT has no rivals. BMW persists with the Z4, but it's only a two-seater, as is the Mercedes-Benz SLK roadster. 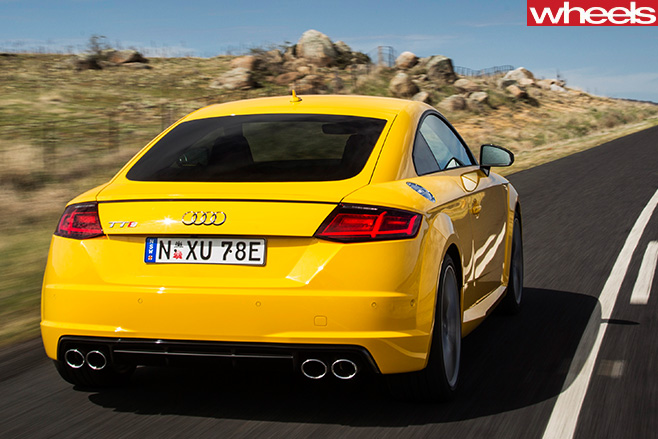 THE WHEELS VERDICT
All the embellishments to drivetrain and suspension have worked: The Audi TTS drives as sharply as it looks. Can't help feeling this chassis could handle even more power, too. Exciting times ahead.

THE WHEELS REVIEW
I CAN'T make up my mind how I feel about these Hankook Ventus tyres. My first reaction is the Audi TTS sports coupe deserves better.

The TTS, as Wheels readers would know, is a sportier version of the TT. This is the third-generation TT, but only the second to get the S treatment, which costs an extra $15K over the TT quattro S-Line. There's a roadster model, too, which we'll test in due course. 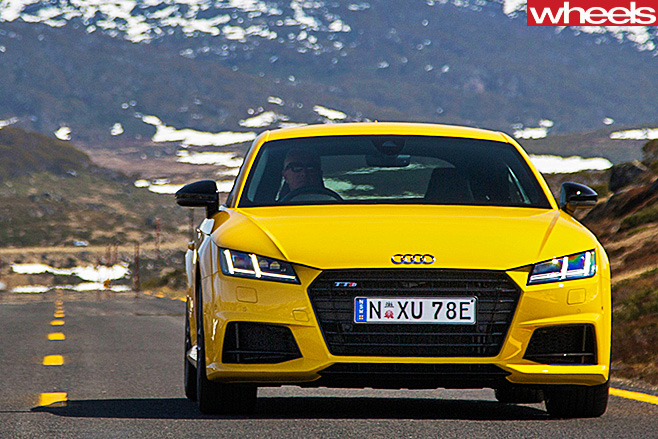 The 'S' treatment includes a 41kW and 10Nm more powerful 2.0-litre tubocharged engine, a 10mm lower ride height, more sporting adaptive suspension tune, a sharper steering rack from the Audi S3, and some sporty visual embellishments like silver exterior mirrors and rear diffuser − all aimed at taking the TTS to a higher plane of existence.

But these tyres… They're giving up at the front, letting the nose run wide, scrubbing away precious cornering momentum.

Then I look at the speedo and realise we're going quicker than I thought. But it just doesn’t feel that quick. The TTS feels so calm, so composed, so comfortable at this velocity. Surely there's more to be had out of this little sports car. 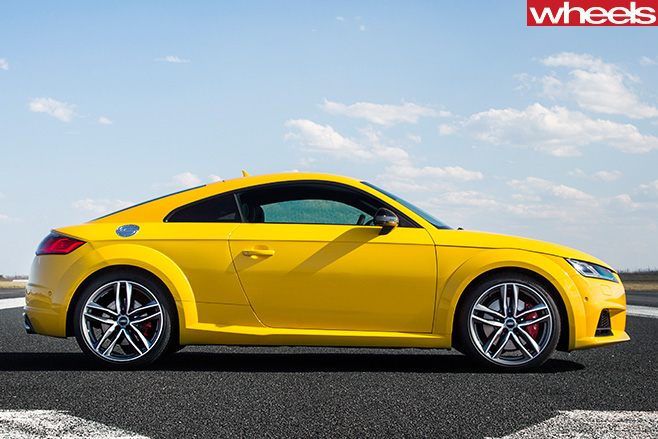 We're hoofing along at a reasonable pace on the wonderfully serpentine Lake Mountain road − closed for the occasion so we can give the TTS a red-hot run in controlled conditions. Until now I had no complaints.

The tyres do a great job getting the 2.0-litre turbo four's 210kW and 380Nm to the road. And the all-wheel-drive TT S fairly bursts out of corners, as its 0-100km/h time of 4.7 seconds would suggest, engine singing, machine guns firing with every deliciously quick gear change - provided you keep your throttle eagerness below the threshold of the traction-control fun police. In fact it's better to engage ESC Sport mode, which allows the driver to overstep a little, and to have first option of correcting that exuberance, before the electronics step in and take over. 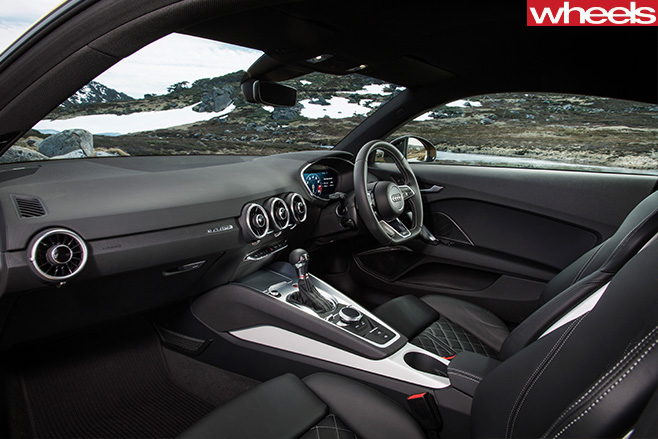 I'd also like the quattro all-wheel-drive system to be more rear-biased, but the payoff of all-wheel drive out of corners is hard to begrudge.

The tyres also do a great job communicating grip levels back through the TTS's suspension and chassis to the driver. The steering wheel, too, provides some feedback, though the weighting itself doesn't convey the stress the tyres are under.

This is one stoically composed yet ballistically quick little coupe. Simply put, it refuses to become ruffled or rushed no matter the speed. There's a Germanic efficiency to everything it does that suggests it cannot be surprised, nor be upset by the unexpected. 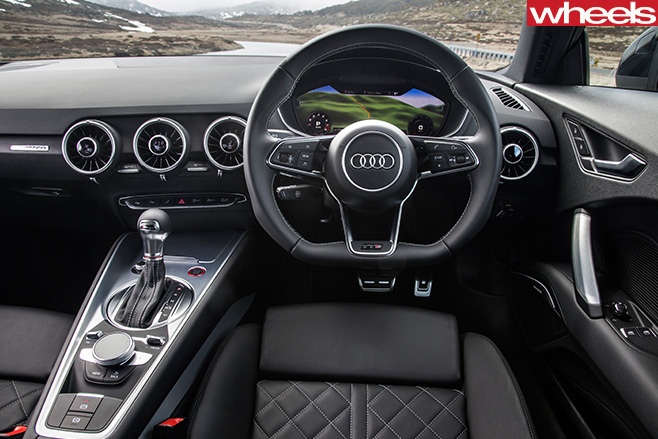 That's a good thing in a sports car. The last thing you want is a chassis that's unable to make the most of the engine, or tyres - or driver.

Previous TTs have been dynamically decent, but really they've been more about styling and show. This one has the chops of a proper sports coupe. It has the dynamic composure to more than match the sharp styling's promise.

Which means it'll provide a fantastic platform for the unconfirmed − but surely gonna happen − TT RS. Wonder if it'll get the RS3's full 270kW tune? I reckon this chassis could handle it. 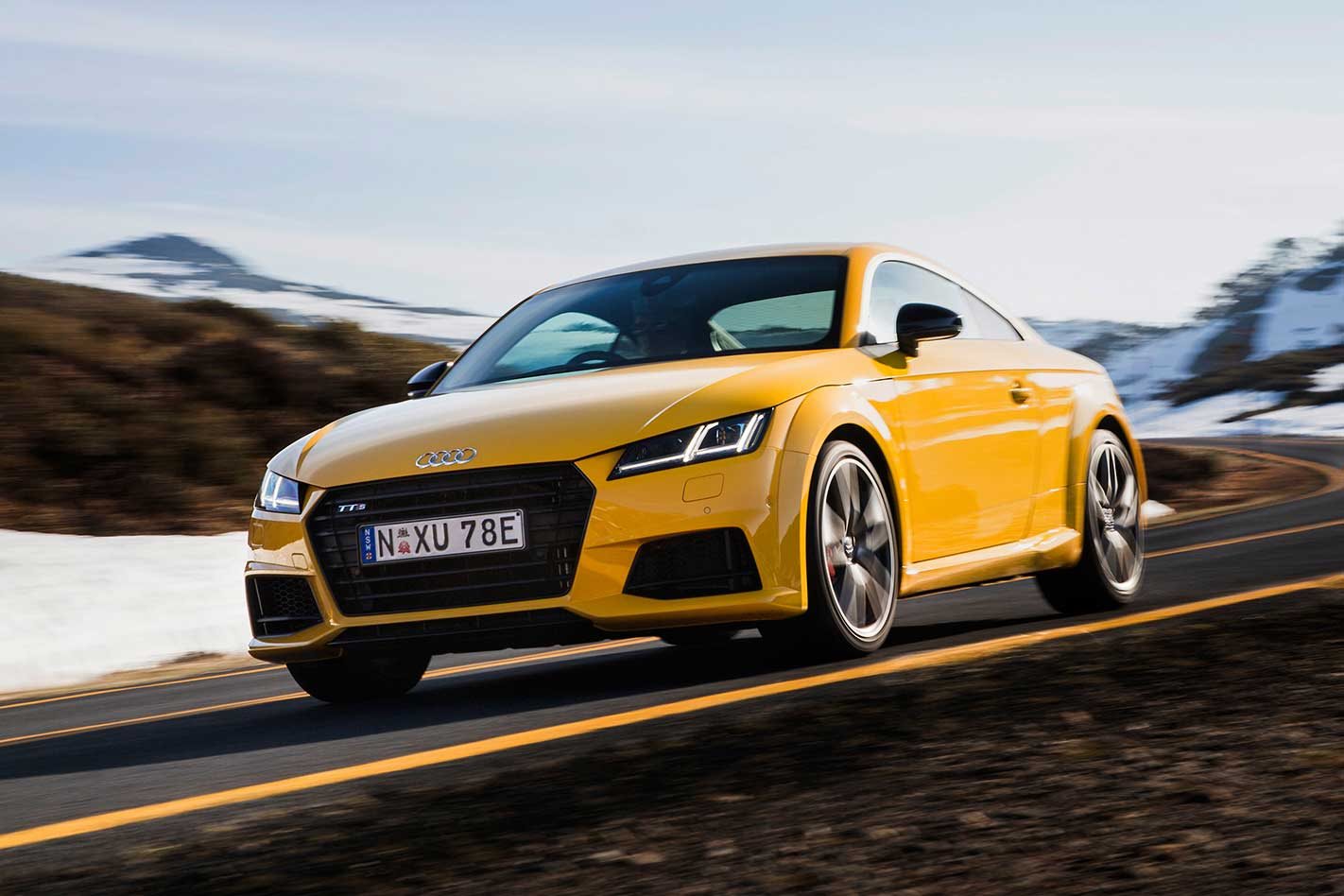 TTS isn’t a chemical abbreviation for testosterone, though it would be an apt one for the more steroidal version of Audi’s sharply handsome coupe.

We’ve already learned the third-generation TT is the most dynamically capable version yet, and with the Golf R/S3 drivetrain under the bonnet… Well, excuse us if we approach the new S-badged version with some anticipation.

If the TTS can serve up the Golf R’s fun in a sexier, two-door body we’ll be laughing, though not necessarily all the way to the bank. The TTS costs almost double, starting at $99,900 for the coupe (or from $103,900 for the drop-top). Equipment levels have increased, but it also drops it right into Porsche Cayman territory. 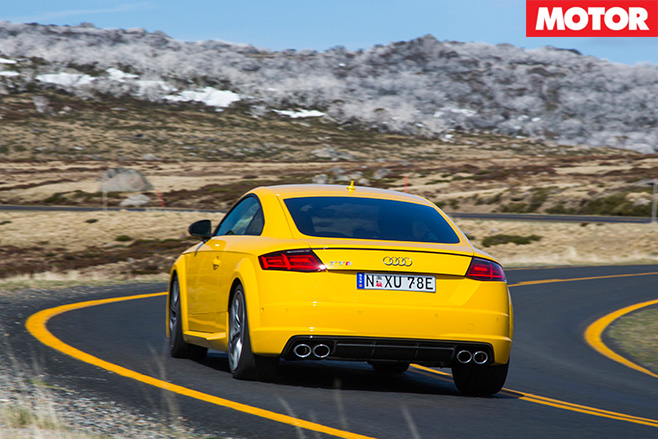 The typical TTS buyer who prioritises performance almost as much as design won’t be disappointed, though. TTS Mk2 puts its 45kg-lighter kerb weight, uprated 2.0-litre four-cylinder turbo engine and faster-acting quattro system to good effect by knocking six-tenths off its predecessor's 0-100km/h claim.

You’ll need a Cayman S that costs $40K more and still needs the optional Chrono Pack to match that 4.7-second pace. The TTS’s dual-clutch auto certainly wastes no time snapping through its six ratios – at its quickest in Dynamic mode, where flat-out upshifts are also accompanied by delicious exhaust pops.

Using the paddles still brings the best response from the drivetrain, though third and fourth gear almost become exclusive on a driver’s road – trading on the engine’s tenacious torque that peaks from 1800rpm to just 100rpm shy of where peak power of 210kW sets off at 5300rpm. 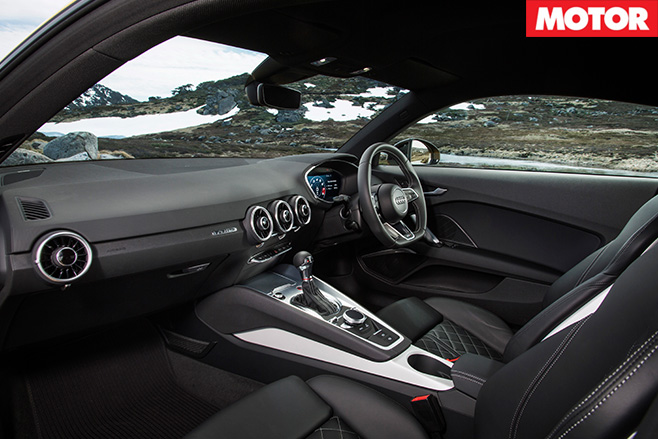 Veering off the straights and into corners, the TTS displays greater agility than its predecessor. Understeer isn’t entirely eradicated, but the TTS is now more inclined to adopt a neutral mid-corner stance with a right-foot pedal adjustment.

That adjustment can go in either direction, but don’t expect power oversteer despite the latest-generation Haldex system’s ability to pre-emptively load extra torque to the rear wheels when it detects sharp turn-in. The TTS’s quick steering also helps direct the coupe into corners with more immediacy, and you can also carry speed confidently into corners under trailing brakes.

There’d be greater involvement if the steering wasn’t so introverted, though the helm scores well for consistency and accuracy. There’s no need to wait for a twin test to determine where the TTS sits dynamically in relation to the Cayman, though the Audi can still claim some high ground with its sharply cut exterior, quick pace and a stunning cabin that marries high quality with high tech. 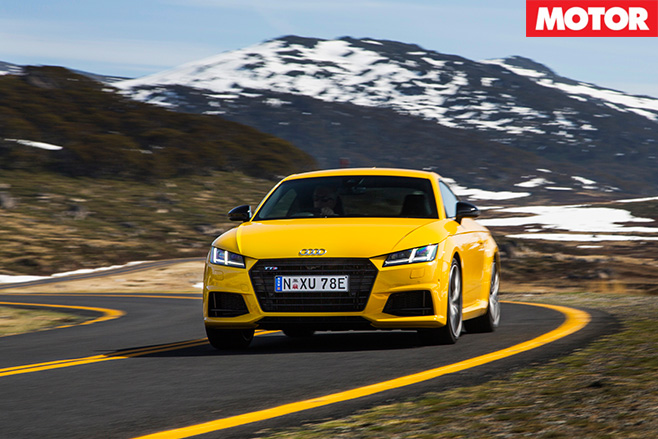 A question just lingers over whether the base TT is actually the sweet-spot in the range. With a ride that deteriorates badly over rough roads, the TTS’s beefed-up suspension may be a lesson in the perils of spending too much time in the gym.