As the BMW i3 departs the Wheels test fleet, modern life strikes a cord

As the i3 departs the Wheels test fleet, modern life strikes a cord.

DESPITE society’s obsession with lycra-infused bike riding and 24-hour gyms, we’re generally a pretty lazy bunch. The thought of getting out of your seat to change the TV channel or answer the phone long ago went the way of home-delivered milk and affordable houses. Walking to the shops? Forget it in this app-happy world.

So I’m not as surprised as I once might have been that plugging in a power cord feels like a chore. Yet I haven’t had to visit a petrol station for weeks. That’s life in an electric car for you.

Three months into my time with a BMW i3 and it’s time to say goodbye, only I’m not ready to wave it off.

Sure, I could live without the oddball looks (it’s dorky and skinny from behind), the headlights are more about preserving electrons than lighting the road, and the front-rear pitching is about as fun as vacuuming. Oh, and I’ve never really got used to the rotary gear selector. 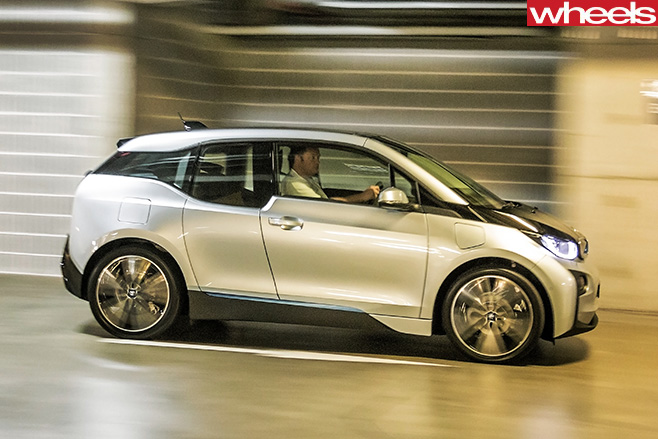 But there’s a lot to like, and I’ve had an interesting glimpse into an electric-car world. I was expecting the i3 novelty to wear off, like a holiday romance. Except it hasn’t. I’ve come to love the car Wheels voted its 2014 Car Of The Year.

It starts with traffic, something difficult to like. But I hated it less in the i3. Being able to dart away from a set of lights on full throttle without the noise of a beefy V8 or frenetic four-cylinder was pretty cool. And when the gridlock banked up again – yep, just 300 metres later – I knew I’d be turning some of my kinetic energy back into electricity for the next mini grand prix.

I came to value Connected Drive, the app that allowed me to check where the car was and how much charge it had (you can also monitor energy usage). OK, it’s gimmicky, but it’s also handy, like when I knew I’d only be driving 20km the next day so I didn’t have to wander out on a cold night to plug it in.

Yet it struck me after these few months that I had no idea how much it was costing to run. After all, 15kWh per 100km doesn’t mean much.

So, off to the filing cabinet for an electricity bill. I’m paying 25.0926 cents per kWh precisely. Each 100km in the electric Beemer has therefore cost me something like $3.90. That’s half what I’d be spending in a Toyota Prius, but amounts to plenty when it’s comes in one three-month lump sum added to an electricity bill already bloated with three months of heating, cooking and lighting. 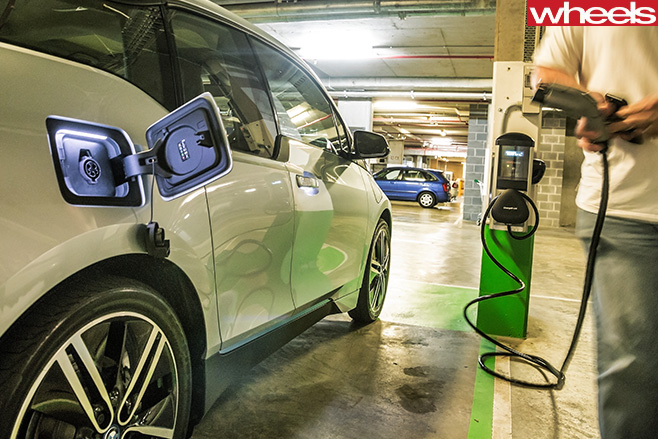 My final month with the i3 threw up a disconcerting warning that a tyre was underinflated. On closer inspection it was only 0.2psi under the threshold, yet it decided to alert me it was ‘dangerously low’. The only way to so shut it up was to go to one of those petrol station thingies I was learning to forget about. Being the range-extender version, I also gave it a shot of fuel to top up the tiny nine-litre tank; driving a noddy-looking electric car is odd enough, but fuelling it is simply weird.

But there’s plenty of feel-good factor about driving the i3. Apart from doing my greenie bit, I also found myself looking down the nose of Prius drivers, in much the way they did to other drivers a decade ago. Such old technology…

BMW claims an electric-only range of 170 kilometres for the i3 Rex (and double that distance if you use the range extender’s nine-litre fuel tank) but we never got close to the battery-only figure. Typically it was between 110 and 125km before the drone of the 647cc two-cylinder petrol engine kicked in. That was fine for most of our city-based driving, though, and we often went two or three days before plugging in for a charge.

THE solar power system I’d waited months for arrived two weeks after my i3 went back. But at least my next electric car will be largely charged for free – assuming I can charge it during the day. My 4kWh system only works when the sun is out, reverting to dirty old grid power after that. Battery systems that take you off the grid are the hot topic in solar energy circles, but they’re a lot more expensive than the increasingly common quality sub-$10K systems.

Read part 2 of our BMW i3 long-term car review.