The V8-powered version of BMW’s 7 Series saloon has arrived, and even includes a stretched wheelbase if Sir needs it.

WHAT IS IT?
THE V8 for the new 7 Series has arrived in both regular and long-wheelbase guises as it chases down the Mercedes S-Class and Audi A8 in the battle of the limos.

WHY WE’RE DRIVING IT
This is an all-new 7 Series. Codenamed G11, the six-cylinder petrol and diesel variants arrived late in 2015, but these are the heavy-hitting, 330kW V8 models with even more standard gear. As well as the G12 long-wheelbase Li, the new range-toppers add more standard tech and a more rapid sedan. 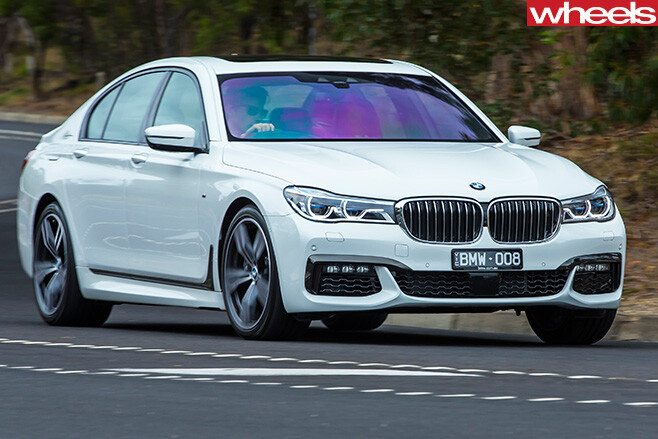 THE WHEELS VERDICT
The BMW 750i has not only been to the gym, but also taken night classes. The result is a machine that has progressed to the next level in terms of both an opulent, luxurious experience as well as an impressively sharp driving character. Some of its tech may be gimmicky, but it’s a seriously accomplished high-class limousine.

THE WHEELS REVIEW
THE seventh-generation 7 Series dazzled at Wheels COTY 2016, but was limited to its six-cylinder powerplants. Now, the 750i has arrived with its twin-turbo 4.4-litre V8 delivering 330kW in a measured but devastating fashion. Yet for the $65K over a 740i, there’s far more to the 750i than simply a more powerful engine. 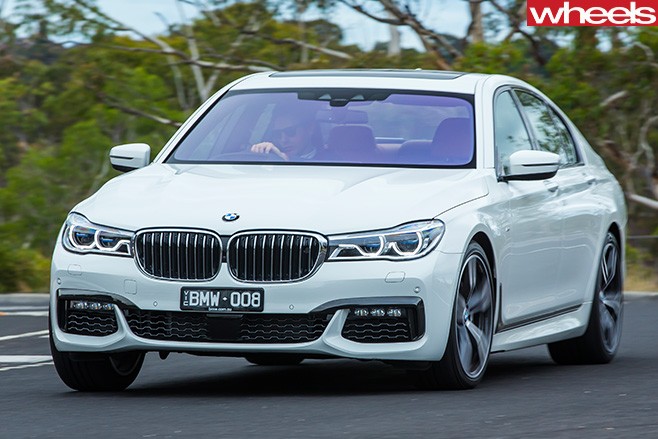 The 750i brings its stunning design that ensures you won’t mistake this monolith for a 5 or 3 Series. From the air-gulping kidney grilles to those headlights, which waif up and around the leading edges, the 750i sports a strong presence and muscular stance. There are inch-bigger 20-inch alloys, while trainspotters will pick the V8’s dual exhausts. Even with these touches, there’s an overall elegance to it, especially at the rear with its stately yet athletic surface tone.

The 750i cockpit takes familiar BMW architecture, loads it with tech then dips it in swathes of Nappa leather and Alcantara. The dash top is leather; there’s a head-up display and digital instruments; the silverware around the HVAC feels metallic, not plastic. The plush rear carpet takes your feet to a new level of fetish. The rear also has some of the 7er’s boldest tech, including a tablet that unlocks 24 functions. That includes television operation and adjusting your seating position as well as that of the chair in front. You can also manage climate change, surf the ’net, and even take it with you when you’ve left a rear seat that’s as supportive and comfortable as the fronts. 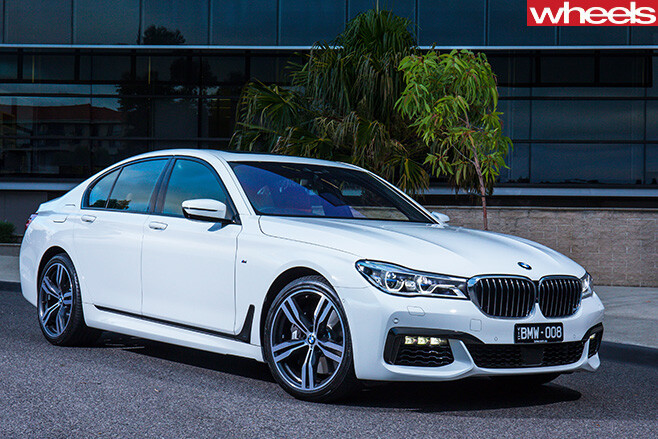 That’s where Australian BMW 7 Series owners will be: in the captain’s chair. Here, the gesture control seems a tad gimmicky, as you can perform the same functions via the steering-wheel switches, not to mention the excellent voice control system. At night, there’s the rabbit-halting “laser lights” (high-powered LEDs, not actually lasers) to go with the night vision, now with animal recognition. It’s the engineering underneath the 750i, though, that shows this car is the genuine article.

That V8 has a tough yet refined idle; a sophisticated baritone wedge that’s creamy and warm. Push the 750i’s progressive throttle hard, and it answers briskly. The eight-speed behaves more like Clark Kent deftly unbuttoning his business shirt to reveal a taut Superman chest, rather than him hastily ripping it open. It’s a feat to deliver a gob-smacking 4.7sec 0-100km/h acceleration claim, half-a-second faster than the old 750i, in such a polished fashion. 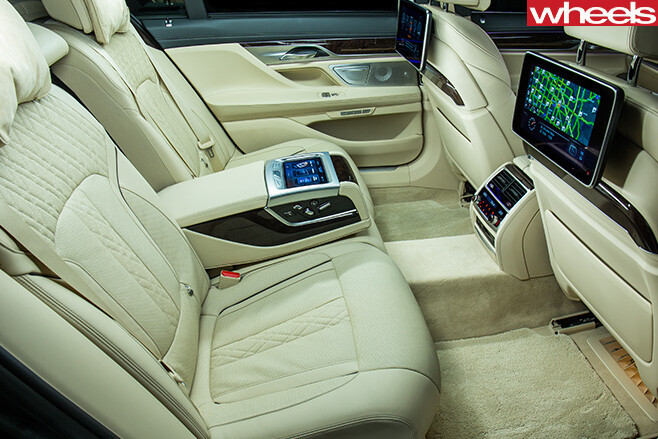 The driveline is fast while smooth, never ham-fisted or sudden, yet magnificently powerful thanks to its low-rev torque delivery. Its 650Nm is identical to the previous model, but arrives 200rpm earlier, from 1800rpm. That helps drivability, but it’s the lighter ‘Carbon Core’ that enables an improvement in fuel economy, now a claimed 8.1L/100km from 8.6L/100km.

The driveline silkiness is not to say that the BMW lacks engagement. Despite being more than five metres long, with a wheelbase beyond three metres, the 750i handles and rides supremely. Standard is the ‘Executive Drive Pro’ adaptive air suspension, and in Comfort mode, its supple ride is impressive, a perfect partner for its near silent highway cruising. There’s a tiny amount of wind noise at 110km/h, but this is otherwise a luxurious sedan as intended. What’s more impressive is the way it masters corners. There’s little body roll, and it’s quickly controlled, moderated further by the adjustable seat bolsters up front. Switch to Sport, and the ride remains supple, with only a marginally harder edge that’s never crashy over even the largest pot-holes. The steering, too, is responsive, although it’s a late turn-in even in Sport. It’s controllable and light even if it’s not overly direct or feelsome.

That makes the 750i a more characterful, seductive limousine than its six-cylinder counterparts, and an impressive motor vehicle. While its innovations are hardly rousing, the 7 Series melds a much more drivable chassis with its characterful V8, class leading fuel-economy and performance, all chaired from a far more opulent cabin. It’s a significant step up from its predecessor.