How much grace would you like with your space?

SUVs didn’t exist in Sir William Lyons’ day and you have to wonder what he’d have made of a Jaguar steeped more in height than history.

We’re simply surprised Land Rover’s blood brother hasn’t done one sooner. Especially when Jaguar admits the F-Pace will achieve what the Wrong-Type – sorry, X-Type – failed to do and push the brand past 100,000 annual sales.

The name still seems a bit weird – S-Pace might have been simultaneously logical and comical – but there’s no denying Jaguar has designed a fine-looking member of the high-rider breed.

With both side glass and bonnet more elongated than those of your typical SUV, the F-Pace looks at once graceful and athletic – even if its roofline is higher than that of the C-X17 concept that previewed it. 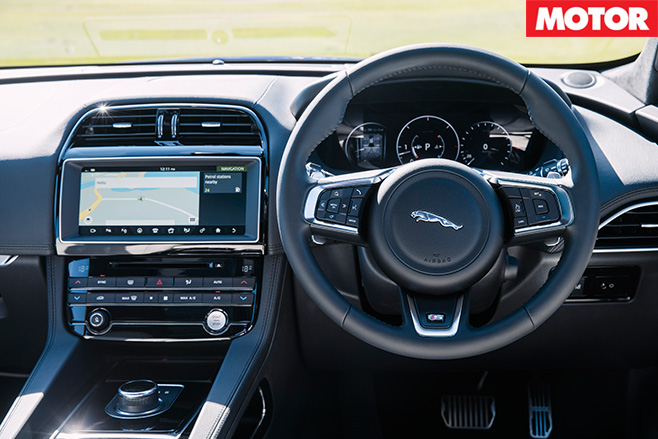 There are F-Type cues in the rear haunches and, most obviously, the tail-lights, but we’re more interested in exploring Jaguar’s claim that the SUV’s handling has extracted strands from the sports car’s DNA.

A comparison is even easier with a shared engine – the 3.0-litre supercharged V6 featured in the $103,135 F-Pace S 35t, which is the sportiest variant for now. In this spec, on brilliant roads, the F-Pace does not behave like a big cat on a hot tin roof.

Of course, there’s more body roll than you experience in its sibling F-Type sports car, even if you have the S’s standard adaptive dampers in Dynamic rather than Normal.

The same can be said about the rival Porsche Macan’s relationship with the Cayman and, notwithstanding its 1861kg mass and higher centre of gravity, the F-Pace can dance without losing its balance. 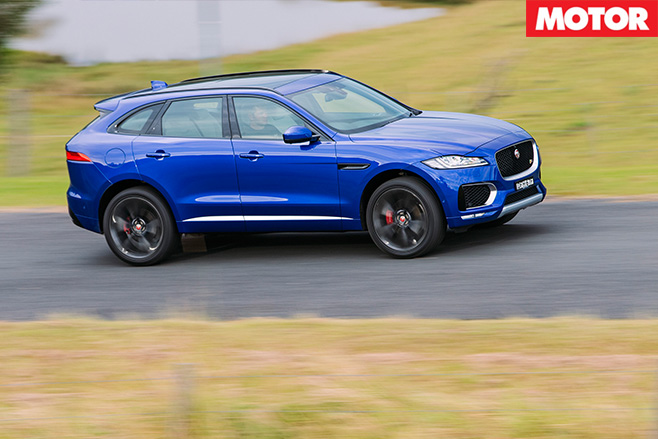 Bountiful levels of grip from the S’s 20-inch tyres further boost driver confidence. Yet prod the sharp-responding throttle in tight corners and there’s a satisfying semblance of rear-drive feel as the F-Pace chirrups its tyres and shifts its tail slightly outward – without getting wayward.

That supports Jaguar’s claim that its on-demand all-wheel drive system is back-axle-biased. We’re grateful as the company doesn’t currently have any plans to bring the pure rear-driver to Oz.

The F-Pace turns in briskly, though the steering’s impressive directness and accuracy is offset by a shortage of heft and feedback.

Despite a firm ride that confirms Jaguar’s suspension priorities, it offers enough compliance on country roads to avoid becoming tiresome. 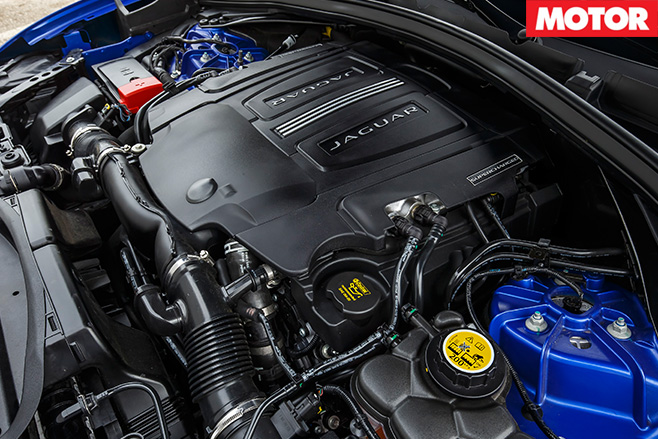 The supercharged V6, with a full-cream 280kW in the S (other 35ts get the semi-skim 250kW), has no trouble gobbling up the kays. The ZF auto eases through its eight cogs in normal driving, but get any sportier and paddle shifting is more effective than the self-shifting S mode.

You buy an F-Pace rather than an F-Type because of lifestyle demands, and families will be served well by a wide and spacious boot, 40-20-40 split-fold rear seats and generous back-seat space. 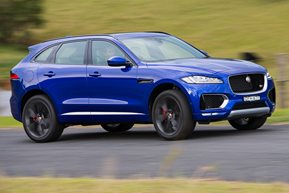