US buyers of the new Mazda MX-5 can option Brembo brakes, Bilstein suspension and forged BBS wheels. Should we envy them?

US buyers of the new Mazda MX-5 can option Brembo brakes, Bilstein suspension and forged BBS wheels. Should we envy them?

WHAT IS IT?
A honed version of the much lauded Mazda MX-5. This is the US Club spec with uprated suspension and brakes, and with the option box for weight-saving BBS forged alloys ticked, too.

WHY WE’RE DRIVING IT
The pack is offered on US-spec MX-5s (the MX-5 is called Miata there), as a factory option. Mazda Oz has a history of offering Bilstein packs and similar upgrades for previous MX-5s. While not confirmed, you wouldn’t be foolish to bet on this pack coming here once the box-fresh MX-5 has been on sale for a few years. 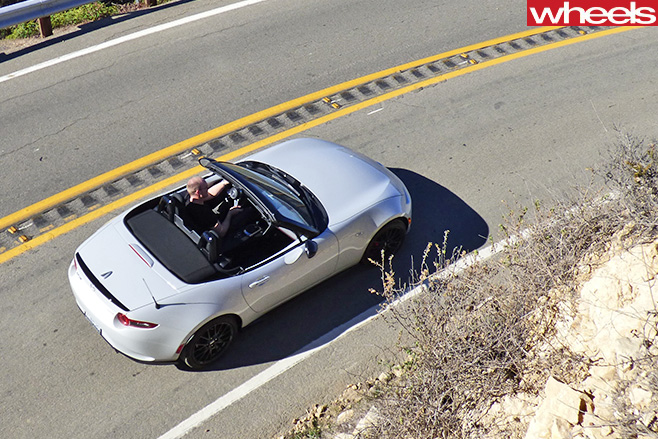 THE WHEELS VERDICT
A smart tweaking of an already brilliant package, the Club Pack with BBS gear underlines the MX-5’s chassis talents and adds depth.

PLUS: Hones an already excellent package without ruining it
MINUS: Not offered here (yet); could easily come with a splash more power; MX-5 hardly needs handling upgrades

THE WHEELS REVIEW
CAN the Mazda MX-5 get any better? Tina Turner’s We Don’t Need Another Hero may sound whenever the new roadster graces the Wheels garage, but the real answer is that no car is perfect. So this uprated version presents a salivating opportunity. What does this MX-5 do that the Mazda MX-5 2.0-litre Australian model does not? 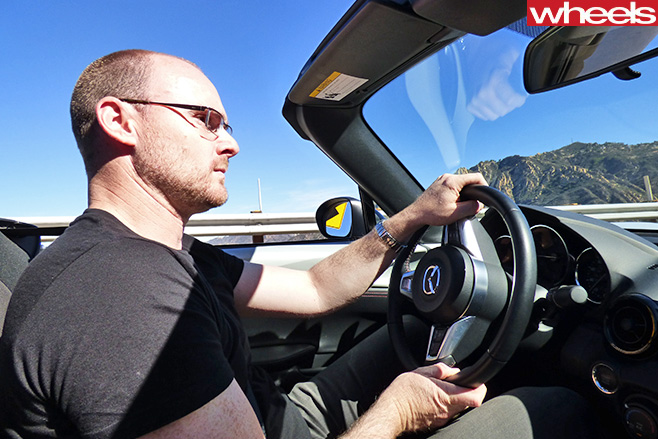 Sold in the US where we’re testing it, the factory-optioned BBS package includes 17-inch forged BBS-alloys and Brembo brakes, on top of the US-market Club spec that includes Bilstein shock absorbers, front and rear bumper extensions, side skirts, and a front strut brace to stiffen up the talented roadster.

The US market misses out on the 1.5-litre engine that we get here, instead starting off with 16-inch wheels on the 2.0-litre entry-model, making the 17-inch alloys on the Club worth the step up on their own for US buyers. The BBS package goes further, swapping those 17s for lighter, stronger, forged versions of the German wheel-maker’s classical mesh design. They’re wrapped in 245/45 Bridgestone Potenza SE001 rubber, the same as the boots fitted on Australian market models. And they house bigger brakes, in the form of Brembo 290mm, four-piston units up front, with a single piston squeezing 279mm rotors at the rear. 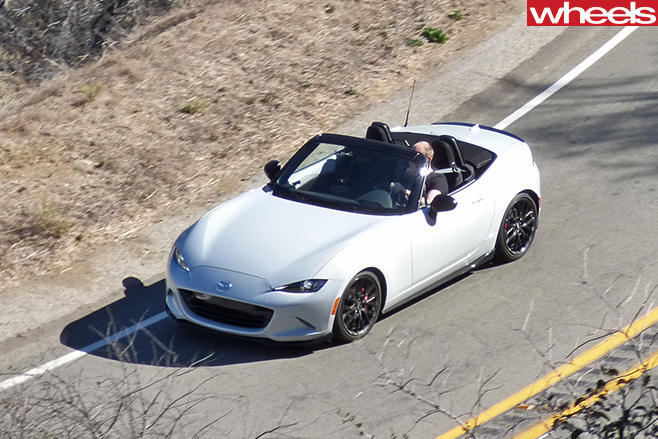 The Club also scores a front strut brace to stiffen up the nose, as well as those Bilstein shock absorbers, neither of which are offered on Australian models just yet. So while the steering retains the same precise, responsive character, with 2.6 turns lock-to-lock, the Club is the most capable point-to-point example of the new ND MX-5 to date.

On road, the changes allow you to push the MX-5 – and yourself – even further. The increased stiffness allows you to exploit the crisp turn-in on those 17-inch wheels, which already have an (ever so slight) edge when compared with the 16-inch versions. That precise, honed attitude – with dive and squat under hard braking and acceleration, and roll during festive cornering, even better controlled – lets you lean on the tyres more, and make more use of the Bridgestones’ shoulders on a spaghetti-like winding road. 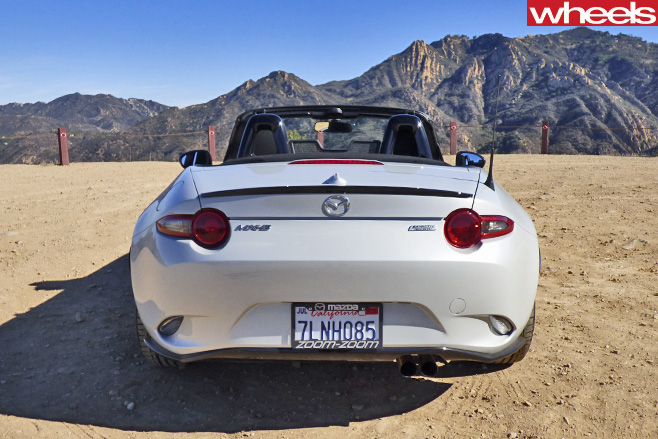 The MX-5’s ESP is still effective, yet far from intrusive. The rotation from front to rear and the brilliant change of direction mean that you’ll be on the power earlier, too, for a more vocal experience of the larger MX-5’s engine – an unexpected bonus. Sure, it doesn’t spin beyond 7000rpm like the 1.5-litre does, but packed here with the cornering hardware it combines fireworks with firepower. The Brembos, too, add a layer of confidence for later, faster corner entry, stepping the game up to another level with sublime balance.

The alacrity and precision of the front end brings stunning poise, with the Bilstein shocks sharpening the MX-5 yet not pushing its ride over the edge into a brittle oblivion. There’s still suppleness and compliance over bumps, ruts and surface changes that means this remains a liveable, comfortable daily driver, and yet it unlocks another level of the roadster’s already abundant chassis talent. 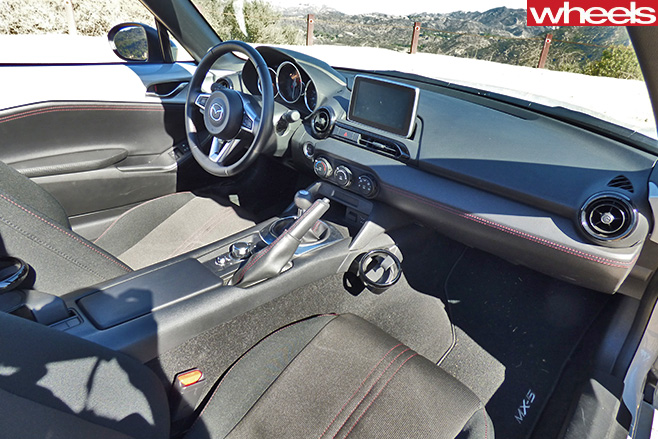 While it covers ground faster, it hasn’t lost any of the theatre and entertainment that the MX-5 has always been (or should have been) about. And that’s an achievement, for it’s far easier to ruin a base-car as talented and accomplished as the MX-5 than to improve it. Should you beat down the door of your local dealer for the Yank pack? No. But if Mazda does bring this kit here, it’ll broaden the grin on an MX-5 driver’s beaming face.