JEEP has given its Pentastar engine a performance upgrade and a few more fuel-saving smarts.

Jeep has introduced the first significant makeover to its best-selling model since its launch in 2011. As well as looking more refined and stylish, the Pentastar V6 under its bonnet gains a suite of improvements. While the Jeep Grand Cherokee is currently the US brand’s best-selling model, among the Grand Cherokee’s line-up it’s the Limited edition that snares the most buyers – the focus of our review here.

The Grand Cherokee is still a great lifestyle choice for those occasionally pitching themselves against the environment, and are prepared to put up with fewer compromises in the city than some rivals. PLUS: Decent balance between on- and off-road performance; visual changes add showroom appeal

NOTHING says “I love the great outdoors” like a Jeep badge. Even if it is little more than a fleeting fancy of one day parking up next to Uluru or washing down the dust with a cold schooner of beer at the bar of the Birdsville Hotel, the Jeep badge sells a dream that one day, yes, one day you will get there. Sort of like the same dream people like to sell by wearing compression skins to the gym.

Jeep’s revised-for-2017 range includes visual tweaks around the front including a cleaner-looking seven-post grille framed in modern-look swept headlights. Inside, there’s a well-integrated semi-digital dash and a commanding driving position, although a foot-operated parking brake will constantly annoy your left shin. It might also be the reason why the Grand Cherokee includes a driver’s knee airbag. Prices have risen slightly, but stacked side by side with some rivals the US-built Grand Cherokee, particularly in its $62,500 Limited guise, remains decent value. Standard kit includes wide, flat leather seats that don’t need the word “trimmed” as a qualifier, powered and heated front seats (the driver’s with a memory function), front and rear parking sensors, a reversing camera, electric tailgate, nine-speaker audio system, sat-nav, a heated steering wheel, tinted glass, dual USB plugs for the rear seats and dual exhausts. Don’t bother looking for a CD player; there isn’t one.

You also get an electronically activated low-speed transfer box linked to a five-setting drive mode dial that selects between different off-road conditions – just match what’s outside the windscreen with the “mud”, “sand”, “rock” or “snow” settings, or just leave it in “auto” and let the 20-inch Continental all-terrain tyres do their stuff. The 3.6-litre petrol-powered Pentastar V6 under the bonnet – a $4000 more expensive 3.0-litre diesel V6 is also available – has had some tweaks to improve performance and fuel economy. The 213kW/347Nm engine adds a stop-start function and a best-left-alone eco mode, and is now rated at an official 10.2L/100km, but the reality is the 2.2-tonne Grand Cherokee will drink significantly more – we saw 12.2L/100km with a lot of highway cruising thrown into the mix.

You’ll want to tap the Pentastar’s potential, too. It’s a keen, responsive unit that loves to rev, helped by a somewhat sensitive throttle that can make finer low-speed movements a bit tricky. Peak power is a heady 6400rpm, but that’s a number the eight-speed automatic transmission is keen to avoid unless you force the call using the pair of stunted steering wheel-mounted shift paddles – they only poke out the top of the steering wheel spokes because the traditional Fiat Chrysler Automobiles-wide audio controls still take up the space below them. Left alone, the eight-speed gearbox is keen to chase torque and grab a higher gear as soon as possible. However, its shifts aren’t exactly silky smooth, generating a bit of a flare from the engine and a barely-there jolt as the gear slurs into place.

The Limited rides well on its coil rear suspension – more premium models replace the steel spring with airbags – providing a quiet, composed ride, even on dirt. The ride is so composed, with wind noise also well suppressed, that the Limited feels more luxury than premium. It’s a shame the slow-witted electric steering that has replaced a hydraulic unit in the interests of saving fuel isn’t as communicative as the system it replaces.

You can sit here and argue the toss that the Grand Cherokee’s monocoque chassis four-wheel independent suspension isn’t as capable off-road as the rail chassis and live-axle systems still used by other off-roaders such as the Prado, but given most of these vehicles will haul bitumen, not dirt, rests the argument in favour of the Jeep. 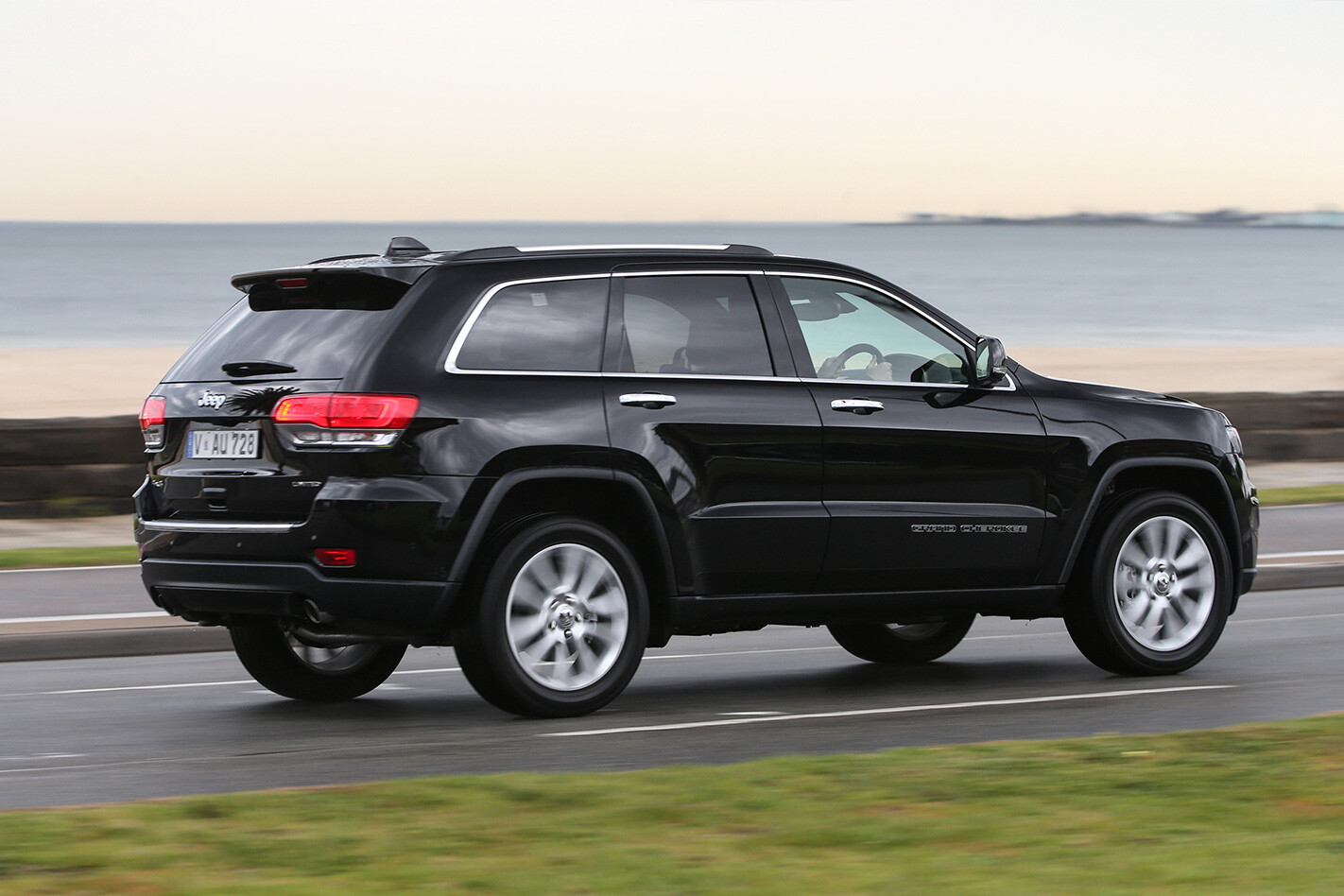 And if you’re going to tow, get the diesel. It’s slower from a set of traffic lights, but officially uses 3.5L/100km less fuel, and the braked towing capacity of the oil-burning donk jumps from the petrol-engined version’s 2.8 tonnes to 3.5.

It’s easy to see the appeal of the Limited. The call of leather and sat-nav is a siren to buyers who want to feed their spirit of adventure, but are more inclined to go glamping than camping.