Rio has come a long way since it first arrived, and the new mid-spec Rio Si is a smart choice in a very competitive segment

The Kia Rio has come a long way since it first arrived, and the new mid-spec Rio Si is a smart choice in a very competitive segment.

I honestly think there are very few cars on the market today that are truly, irredeemably awful; cars that I simply wouldn’t recommend to friends or family. This car, the Kia Rio, is not one of them.

In fact, it’s actually one of the better choices in the light hatch segment. 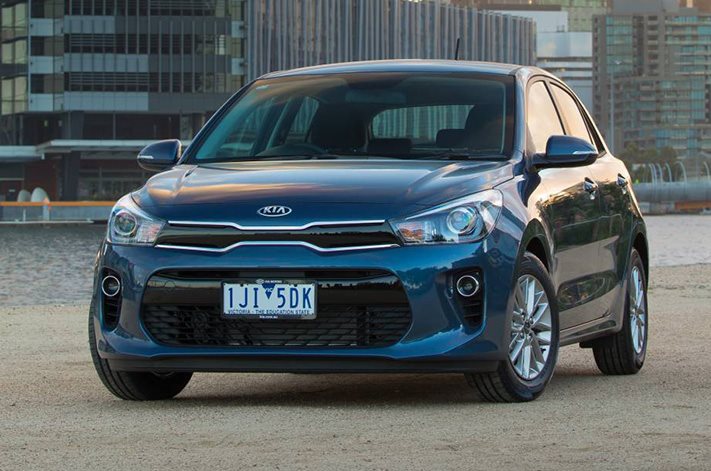 Not only does it boast decent value and a huge seven-year warranty – the longest in Australia – it also drives well, looks good and has a cabin that feels a lot more premium than you’d expect.

The Rio range is available in three grades, and the car we’re driving here, the Si, sits right in the middle.

Priced at $21,490 and coming standard with an automatic transmission, it’s not the cheapest light hatch around. In a segment where similarly-sized cars typically cost under $20,000, it’s handicapped when it comes to price. 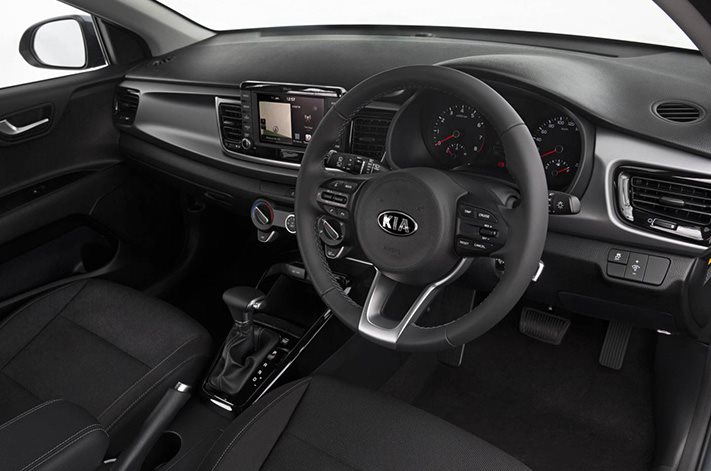 But that’s balanced out by strong standard equipment levels. A 7-inch colour touchscreen, power folding mirrors, cruise control and a digital radio tuner are all factory-issue on the Si, and though Apple CarPlay and Android Auto smartphone mirroring is also offered, you probably won’t need it given the integrated satellite navigation system.

Only one engine and transmission combination is available in the Rio Si – a 1.4-litre naturally-aspirated petrol four-cylinder with 74kW and 133Nm, paired with a four-speed automatic.

The Rio badge has been around since the turn of the century, but it’s come a long way since then. Starting as a fairly frumpy, budget-oriented offering, the Rio has slowly morphed into something with a bit more verve and emotional appeal.

The last-generation Rio was a fairly smart-looking car, but the all-new model goes a step further. Pitched as a higher-end mainstream offering – and with pricing to match – the Rio is a clear sign that Kia is aspiring to shed its bargain-bin image and aim upmarket.

Immediately, there’s a sense the new Rio is cut from slightly fancier cloth than most light hatches.

Design is undoubtedly a highlight, and though there’s heaps of hard black plastic around this interior, the presentation of it verges on high-end. This leather-wrapped steering wheel feels especially nice, the T-bar shifter moves slickly from Park to Drive and the switchgear is impressively smooth and lacks the plasticky feel that’s so common in this segment. 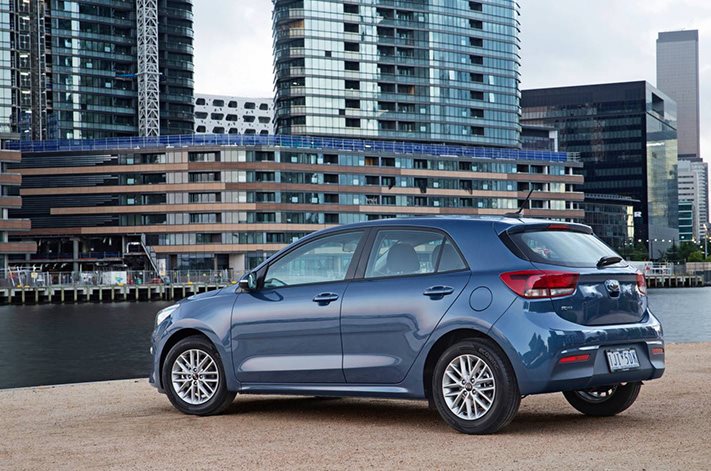 And the centrepiece of it all is this bright, clear 7-inch display, mounted high up on the dash to keep it in full view when you’re driving. Intuitive and easy to use, it’s arguably one of the better infotainment systems in a light car.

The only suggestions I’d make to Kia would be to dress up these featureless door cards, and maybe add some padding to the armrest. The centre console lid’s padded top also doesn’t feel as nice as the leather on the steering wheel, so there’s some inconsistency of finish there.

Cabin ergonomics are good. The buttons on the centre stack are well laid-out and easily navigated by feel, and the driving position has enough adjustment to accommodate a variety of body types.

A 10mm longer wheelbase on the new Rio also liberates more back seat space, and the rear bench in the Rio will comfortably take a couple of adults. Meanwhile, practical design features like the little shelf down here for your phone are definitely appreciated, as are the two door-mounted bottle holders in the back and a 12-volt outlet for your rear passengers. 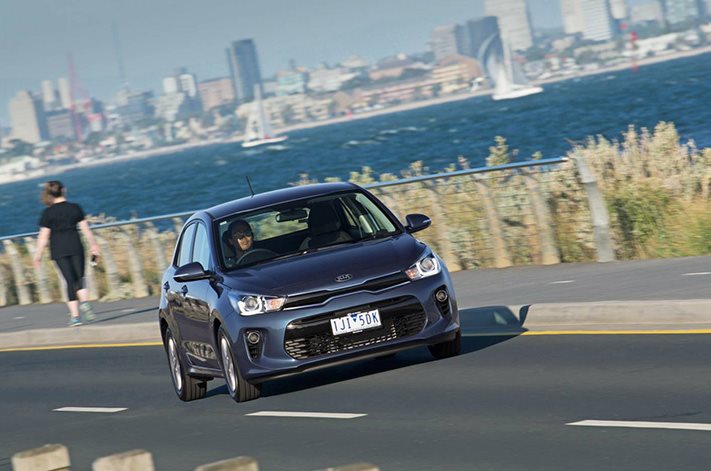 Around town, it drives well. The 1.4 is a modest performer, but copes fine with urban motoring. The four-speed automatic doesn’t hunt or misbehave and actually changes gear in a decisive fashion, but when faced with steep hills and a need to accelerate, its lack of ratios starts being a handicap. With an extra gear or two, the Rio would no doubt be greatly improved.

And while there’s plenty of equipment here to keep most motorists happy, there’s still some opportunity to improve. Autonomous emergency braking is slowly becoming a fixture in the light car segment, but it’s not yet available in the Rio. The Rio’s key rival, the Mazda 2, also comes with fancier gear like a head-up display, blind-spot monitoring and a more powerful 1.5-litre engine.

Ride and handling is at least above par. It’s comfortable and controllable on rough roads, while feeling buttoned-down and reasonably agile around corners. It’s no hot hatch, but it feels safe and secure on streets and highways.

Kia has succeeded in transforming the Rio from drab to fab, but the Korean automaker could still stand to strengthen the Rio offering. Autonomous emergency braking, a six-speed automatic and some cabin material improvements would be at the top of our wishlist. As it stands though, the mid-spec Rio Si is still a smart choice in a very competitive segment. 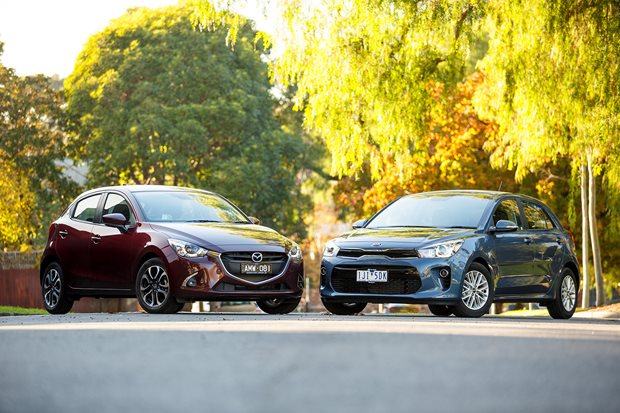 The all-new Kia Rio holds up well against most of its light-car competitors but how does it fare against the highly regarded Mazda 2? 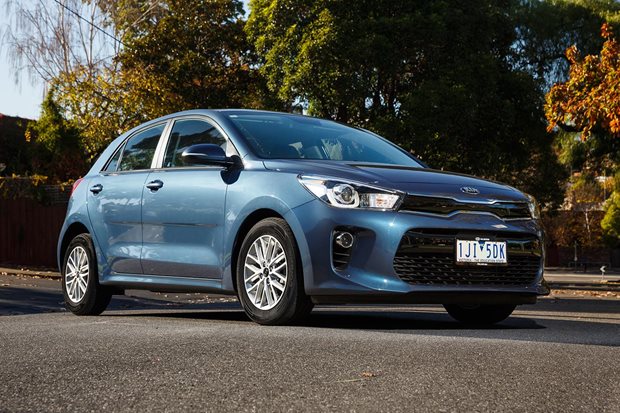 Kia introduced the fourth generation of its popular Rio light hatch earlier this year, bringing with it a European-inspired look and enhanced ride