Every brand needs a hero car. And Lexus has a new one.

EVERY brand needs a hero car. And Lexus has a new one.

WHAT IS IT?
The Lexus LC isn’t just an all-new coupe that sounds like it has stolen its engine noise from a race car and looks like its styling has been borrowed from a sci-fi flick. It’s the new halo vehicle for the whole brand, effectively taking the place of the LFA super car. Obviously it’s not quite as exciting, but it has taken some of the best bits of that much-missed limited-run adventure, although the 5.0-litre V8 isn’t nearly as exciting, or as fast, as the V10 was.

WHY WE’RE TESTING IT
This LC is not just a new Lexus, it’s the new Lexus, according to the senior people at the brand, who describe it as the start of a “brand revolution”. It’s a reimagining of the marque that will filter down through all of its new models, we’re told, including its “brave” design ethos and sporty steering and handling. So the LC is just as important for what it represents as what it is, which is why Lexus Australia says it won’t be measuring its success in terms of sales; it’s more about what it can do for the brand’s reputation as a whole. 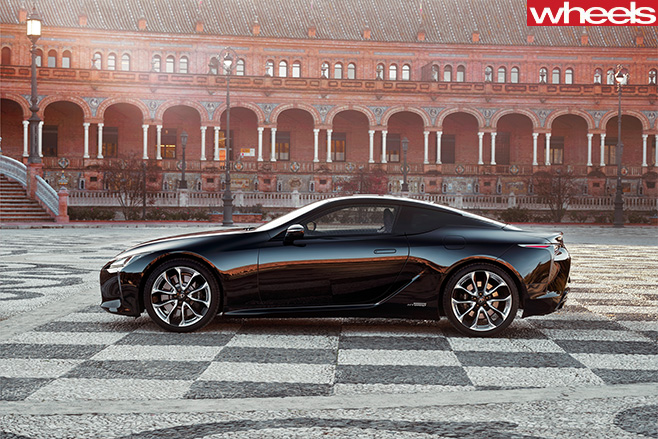 MAIN RIVALS
BMW 6 Series, Jaguar F-Type (they said it, not me)

THE WHEELS VERDICT
If it wasn’t for the limited existence of the LFA it would be fair to call this the best car Lexus has ever made - fast, fun, involving, stylish inside and out and with proper steering to boot. Even the hybrid could be described as excellent, if wasn’t a pointless choice that no sane person would make. If it was 500kg lighter, and maybe a touch more powerful, the V8 could be a great car, but it’s still a surprisingly good one.
PLUS: Design, inside and out; quality and solidity; steering; exciting V8 engine noise; ride and NVH
MINUS: Vast weight; pointless hybrid option; could be a bit quicker (if it was lighter)

THE WHEELS REVIEW
IT’S not often that you’ll find a group of blokes responding to the words “Right, let’s get out on the track then” by suddenly finding something fascinating under their fingernails, sidling off to the toilets to hide, or just whimpering “but I don’t wanna”. 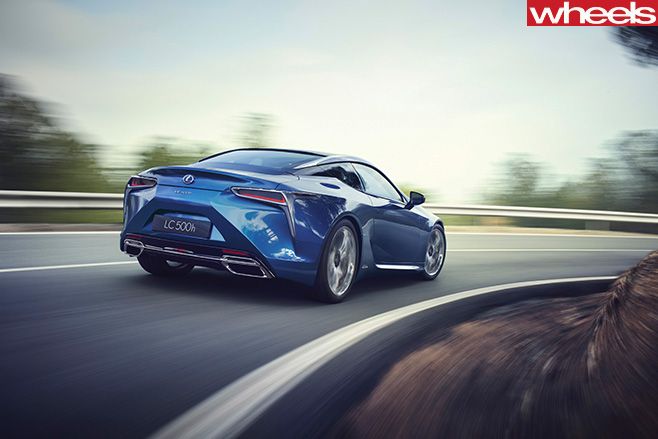 Yet when it’s lashing down in a way that would make even Noah think twice about buoyancy, and the car you’re being asked to swash around a Spanish race track in is the new yet old-school V8-powered, rear-drive Lexus LC 500, it’s natural to display a certain un-manly reticence.

With its concept-car-like futurismo exterior (it really is a heartfelt rendition of the LF-LC concept car we doubted they were serious about building in 2012), the new LC may look more fashionable than frightening, but its intimidation factor hits you from the very first moment you stab the engine’s lovely, metallic start button.

The glorious noise of the naturally aspirated and highly strung 5.0-litre V8 is poured into the cabin through a specially shaped “sound generator” tube, which apparently only enhances the barping bellows rather than artificially creating them.

It’s a system the LC’s chief engineer, Koji Sato, copied from the Lexus LFA (the supercar’s creator, Haruhiko Tanahashi, shares an office with him and was happy to help) and it sounds reminiscent of that wondrous V10 monster. Sato describes it as “a brass instrument tuned to make the engine sound just right” and says it has the same “harmony” as the LFA. 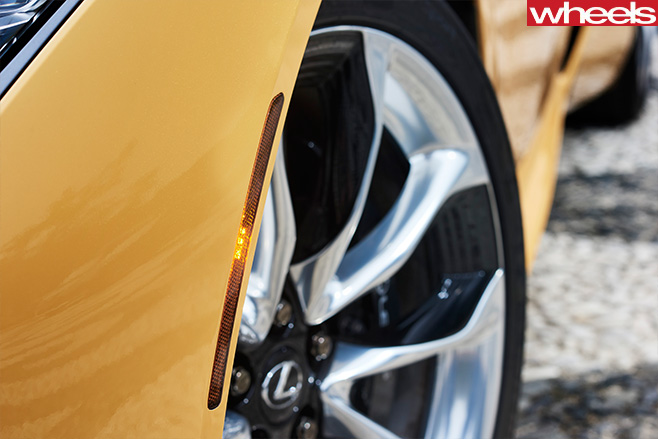 Hearing it tear down the lake-like front straight with a crazy-brave racing driver at the wheel as we splashed into pit lane, it genuinely reminded me of a race car.

Earlier in the day we’d also come to appreciate how cleverly Lexus silences the shouting of the V8 – and all other external noises – when you slip into cruising mode on a freeway. The luxuriant ride in the Comfort setting and the low NVH really reflect the duality Sato has attempted to achieve with the LC – high-end luxury and sportiness in one car.

Happily, the howling noises aren’t the only thing that’s been carried over from the limited-run LFA that won over anyone who drove it to the idea that Lexus could make serious and fun cars.

The steering of the LC also has the kind of forceful feedback and muscularity of its fantastic forebear, and is so much better than every other Lexus to come before it that it’s hard to believe they belong to the same marque. 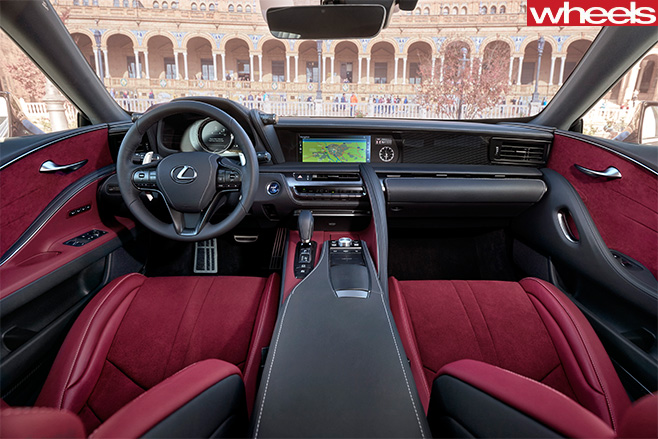 Sato confirms that what he calls the “steering taste” comes from the LFA and that part of the “brand revolution” the LC represents will be the application of that feeling through all future Lexus models.

“The elevated handling of this car will filter through every Lexus we see from now on,” Sato confirmed.

“Obviously, front-engined, rear-drive cars have different behaviour to small cars with front-wheel drive, but the quality of the steering behaviour will be consistent.”

This, along with the commitment to “brave” design the LC shows off, is very good news.

The other area Sato says he borrowed heavily from the LFA in is carbon-fibre technology. There’s plenty of it splashed around the LC – even the door linings area made of CFRP – but the carbon roof and door sills will only be available to Australian buyers who opt for the Enhancement Package (no cost yet, just as there’ll be no speculation about sale price until it arrives Down Under in May 2017), which also includes a pop-up rear spoiler. Obviously not a very necessary bit of aero, that, if it’s optional. 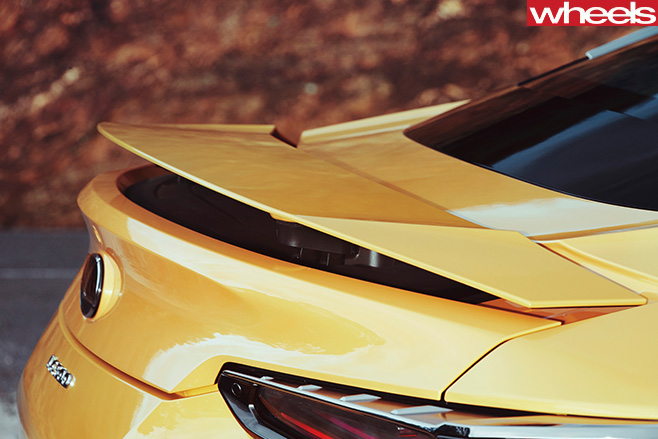 Sato’s talking up of carbonfibre technology rings a little hollow, though, when you discover that the LC 500 weighs a whopping 1970kg (or 2020kg for the why-would-you hybrid LC 500h).

Yes, it’s got an aluminium bonnet and doors to save weight, but the structure of the all-new GA L platform – it will underpin all new front-engined, rear-drive Lexus product – is largely high-tensile steel, and that, combined with lashings of luxury gear inside, adds up to one heavy coupe.

It’s a factor that slightly blunts the car’s performance, particularly when compared to turbo-tweaked offerings from the Germans, and one that you’re always aware of when throwing it around, or standing on the brakes.

That was certainly something we got plenty of practice at, after breasting 220km/h at the end of the straight – it really can get up and go, with its 351kW natmo V8 good for 0-100km/h in 4.7 seconds – and entering the braking zone like a bellowing hippo being cannon-fired into a waterhole. 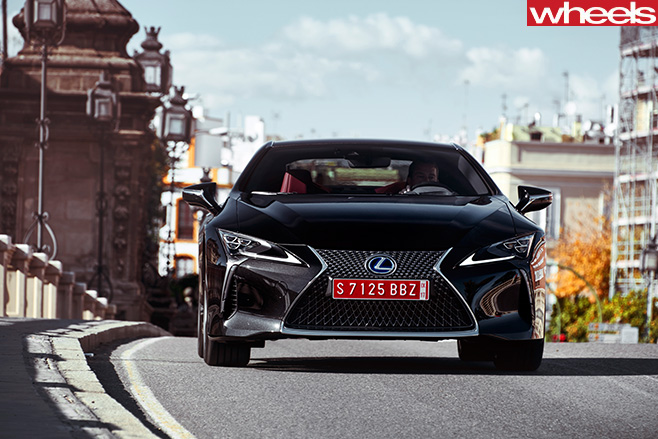 There’s certainly nothing wrong with the brakes, and the sounds the engine makes under frantic downshifting are superb, but what was most impressive was how muscularly communicative the steering was; much like I’m sure a fist pump from Donald Trump would be. Only pleasant.

No matter what the driving conditions, it’s great to be given such direct, linear feedback through the wheel, but on an ice rink track it’s particularly helpful, because you know exactly when the aquaplane understeer is coming, and just how far the rear is stepping out in the Sport+ scary-lairy mode they insisted we use.

Of course, attempting to get 550Nm to the wet ground through the rear tyres alone was always going to be colourful, but what I didn’t expect it to be, particularly in such a heavy and presumably ponderous vehicle, was fun. Yet I honestly couldn’t get enough of it, particularly as the track started drying out.

On public roads, the LC is really quite impressive, and sits nicely flat with its rigid chassis communicated through a perfect driving position. It’s actually easy to believe Sato’s surprising claim that he benchmarked this car against one of his personal favourites, the Porsche 911.

In much the same way that I benchmark my writing success against that of Bill Bryson.

The one part of the LC that’s slightly questionable is the new, world-first 10-speed torque-converter automatic gearbox. Lexus tells us that it needed 10 gears to give the car a “rhythmic” acceleration, that it’s an “elegant” solution to the fact that dual-clutch gearboxes are too jerky off the line (news to me), and yet it’s just as quick to shift (0.2 of a second, apparently), and best of all that we’ll never feel like it’s too many cogs to choose from.

We’re not so sure about that, because it only takes a few minutes of playing with the genuine titanium paddles to become overwhelmed, and then bored, by the choice of 10 gears. Sure, on the race track you’re mainly using two to five, and yes, the paddle-downshift noise in the V8 is superb, but it’s still just easier to leave it in Drive. 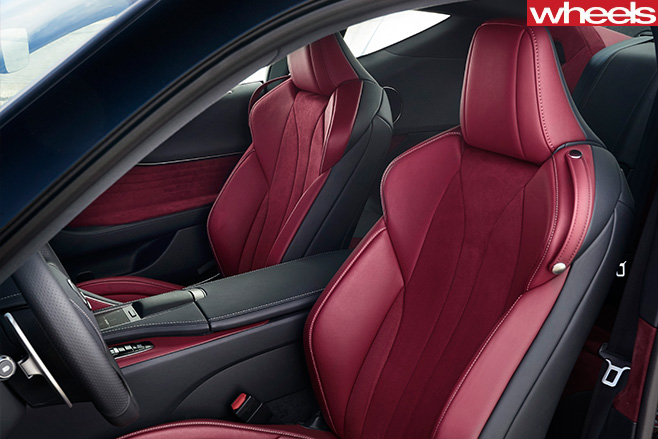 What’s more concerning is that, out on the open road, we occasionally found the software seemingly struggling to decide which of its many cogs to choose, and reacting with noisy and noticeable shunt when asked to accelerate quickly from a trailing throttle. Very non-Lexus behaviour.

When we pointed this out there was much talk of fine-tuning and a sudden revelation that the cars we were driving might be pre-production. Kind of. Let’s hope it’s an issue that’s fixed before the car goes on sale, because it’s one blemish on an otherwise much-improved, and more involving, Lexus experience.

Yes, the new look will be a bit too modern for some of the brand’s more sedate customers, but if Lexus wants to grow it has to stretch itself beyond the golf club car park, and this car will do it. The design grew on me the more I looked at it.

Pricing will be an interesting challenge, of course, with a starting mark of anywhere from $175,000 to just under $200,000 plausible. Once again, it’s not really about selling lots of them, it’s about the very existence of the LC, and trickle-down engineering.

You’ve got to give it to them for having the balls to reinvent themselves, frankly. 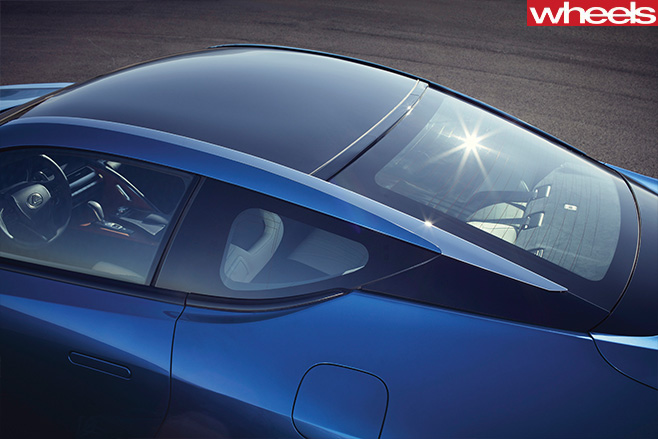 FAST FACTS
Yes, the LC 500h probably is the sportiest and best hybrid the world has ever seen, but that’s like saying you’ve just bought Justin Bieber’s best-ever song, or that Pauline Hanson had just had her best ever idea.

Hanson would tell you that no one needs to buy hybrids anymore, because Trump rules the world, and thus climate change is no longer an issue.

What I’d tell you is that if you drive the 500h back to back with the V8 version and still want the hybrid, you’re a very confused human being. If you’re that worried about petrol prices, how can you afford a car that will hover around $200,000?

And if Lexus thinks it can get away with charging more for the more complex, less quick and comparatively awful sounding version than the LC500, it has gone bonkers as well.

Yes, at 5.0 seconds to 100km/h, it’s quick. Yes, its new shifting device is so clever it can now offer maximum power right up to 130km/h, where before it was only available at 50km/h, and yes the awful rubber-band feeling of old has been banished (and the lighter, better lithium-ion batteries are a step forward too).

Lexus Australia estimates it might make up one quarter of LC sales. I estimate they’ve got to be joking. 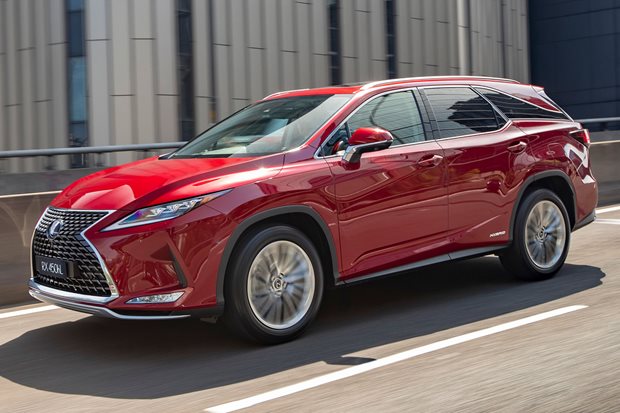