Every car ever made has been built around core pillars of one kind or another. For the E63 AMG, there have been three: a brutal engine note that shook windows, straight-line speed and interior luxury.

A single kilometer always told you the E63 had prioritized the ability to sit comfortably on its 250km/h speed limiter on an autobahn above any other ride or handling measure. And you respected that, even if it made it a bit limited as an all-rounder.

They were competent handlers rather than interesting ones, its German owners more cheered by the ability to not lift off the loud pedal for a 250km/h bend than harassing proper sports cars over mountain passes. 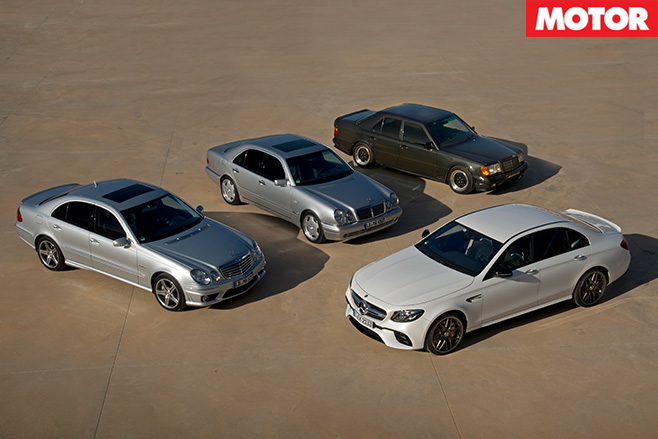 Times have changed. The E63 S has grown up, and fast. It’s now the most rounded sports sedan AMG has ever made, and that reckons with the fabulous Mercedes-AMG C63 it also turned out this year.

The thing is that it handles properly now. It can slide, it can chomp down on its brakes and remain in a straight line, no matter how ridiculously late the self-preservation impulse strikes its driver.

It can then drive through the corner like an adult, push through like the near two-tonne beastie it is, whip through in delightful four-wheel drifts or in lurid, back boot-burning powerslides. 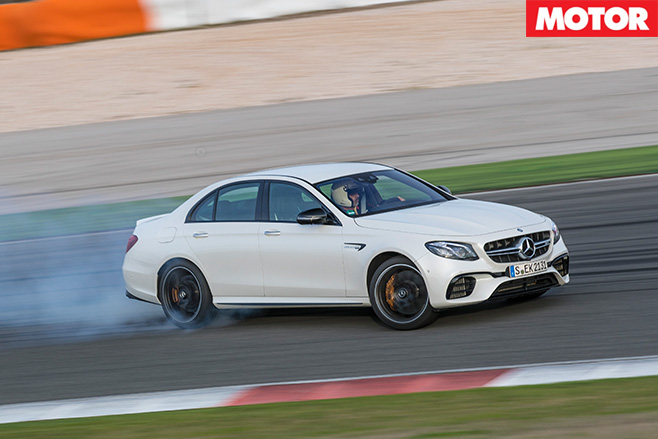 There are a couple of reasons for this. The first is that Benz and AMG have finally figured out how to deliver all-wheel drive and right-hand drive at the same time. I know, right? The best or nothing indeed.

That isn’t just good for grip, it’s good for fun times, because it’s an active centre diff and, in E63 S form, combines with an electronically controlled rear diff, both of which work off the same computer map that runs the engine and gearbox.

Then there’s the suspension. The hardware is a bit like the E-Class, but more betterer. It’s 17mm wider at both ends, with AMG-specific stuff like aluminium uprights for the five-link rear end and an upgrade of the C63’s four-link front suspension. 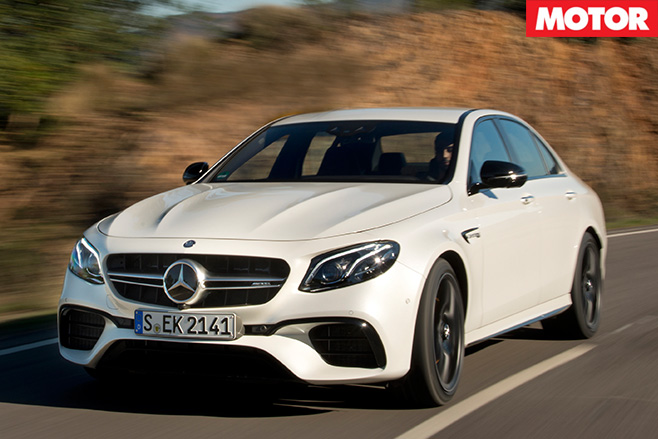 And the key upgrade in all of that is the adoption of the three-chamber active air suspension that lets the whole thing sit flat and change on demand via the mode button. Or you can be lazy and let it do its own thing, stiffening the nose under brakes or the tail under acceleration.

It will still officially top out at 250km/h, though that can also be embiggened with the right box ticked until it whips along at 300km/h, but it’s clear that this is now a full-sized five seater than harries supercars in a straight line. 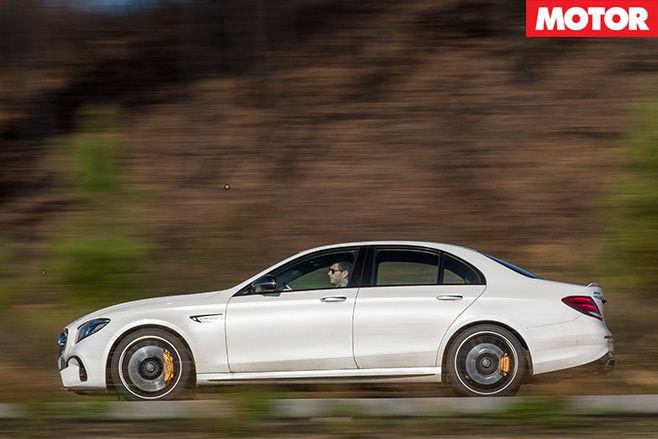 If you really want to put it into perspective, the current M5 takes a third longer to reach 100km/h.

That’s despite the E63 S’s engine shrinking again, down from 6.2 litres to 5.5 in the last generation and now it’s on the modular Benz model of 500cc per pot.

That shouldn’t be a concern, though. Even the girly E63 has 420kW of power and 750Nm (good enough for 3.5 seconds, though it’s an unlikely starter here), but the E63 S crunches out 450kW and 850Nm and it’s never had this much fast-twitch muscle fibre before.

The 3982cc V8 uses a pair of twin-scroll turbochargers, mounted inside the hot vee, to shove in up to 1.5 bar of air pressure that helps deliver the torque peak from only 2500rpm. 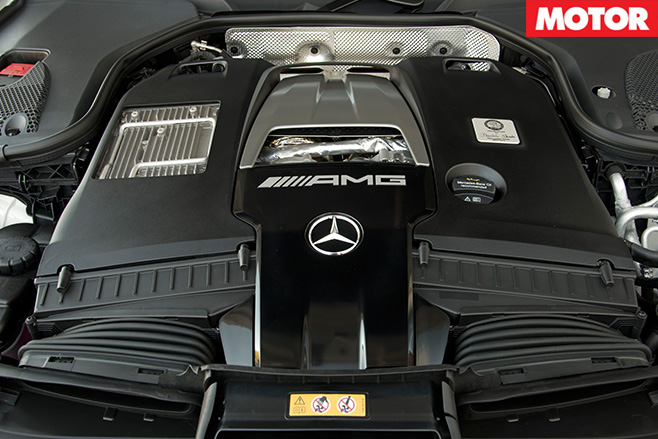 While it uses spray-guided direct fuel injection and other goodies like an aluminium crankcase, it also has cylinder deactivation to turn it into a V4 when it’s cruising. Then the whole thing rests on active engine mounts to arrest the inertia of the biggest chunk of mass whenever it’s cornering.

AMG has done to Benz’s nine-speed auto what it did to the old seven-speeder. It toughened it up, gave it different ratios and then chucked out the chunky torque converter and replaced it with a bunch of wet clutches. It’s now lighter and changes gear quicker, too.

It’s got stopping power, too, though we can’t vouch for the stock 390mm x 36mm front discs, because the only anchors we could use were the optional 402mm x 39mm carbon-ceramics (which use a 360mm x 32mm disc at the back), clamped by a six-piston fixed caliper.

That’s all riding on Michelin’s finest 265/40 R19 front tyres and 295/35 R19 rears, which seem to be fusible links for the rest of the cleverness at the actual road interface. 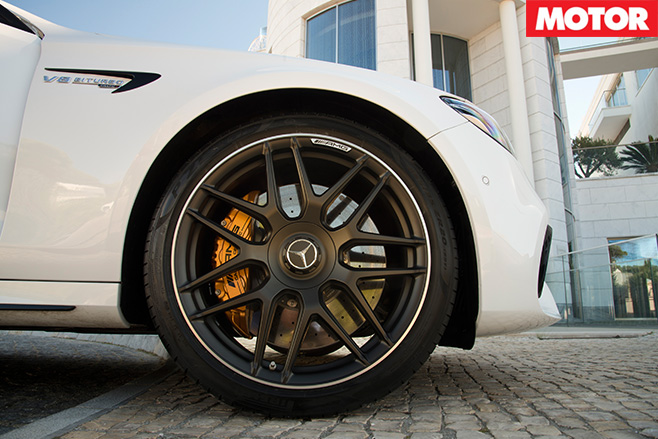 Sure, most people will spend most of their time in Comfort mode, which isn’t actually all that comfortable. It’s firm, to the point where you begin to wonder whether it’s too firm, but it’s beautifully controlled with it. You see cars in front of you crunch over big hits that you brace for, only for the E63 to walk over them with disdain. It’s only the little stuff that seems to nibble, then.

It comes into its own in Sport and Sport+ modes, where the suspension switches things up and the big car corners so flat and steady that you just don’t get tossed around like any other sports sedan.

And that’s the secret to the rest of it. You can pick up the E63 S and fling it at the scenery like it’s a smaller, cheaper EVO and it will all just work. Except louder and faster and, if you push the special Loudenator button on the gearbox console, louder again. 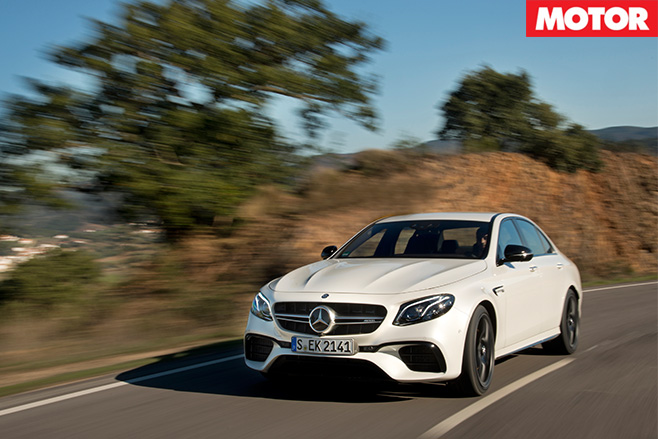 Oh, it’s fast. Brutally fast. Eye-wateringly quick. It’s at the point now that the unconfident won’t bring themselves to give it full throttle for any more than a second or two now, and neither will law enforcement.

And it’s not just loud. It’s furiously loud, like a bottle of concentrated rage has been shaken up and had the cork popped out of it. It’s like a giant is ripping sheets of metal bare handed inside a kettle drum. It’s not a gentle sound.

And then you come off the throttle or change down a gear and the pops and cracks seem like you’re listening an entire sprintcar field, combined with artillery practice, from inside a cosseted leather box. And AMG suggests you don’t crank up the Loudenator button in built-up areas... 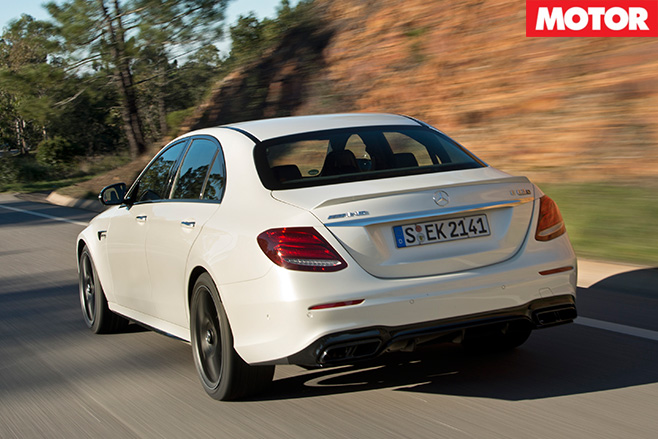 A simple brush on the throttle in either of these modes is enough to scorch the sedan up the road, while stomping on it brings out the beast and the E63 bellows forward, chasing the horizon like it stole its wallet.

The gearshift is beautiful, too. It’s slick and comfortable in Comfort and fast in the middle modes and brutal in Race. It can get a bit jerky on throttle response if you try to be gentle in Race mode, but that’s more operator fault than the car’s problem. 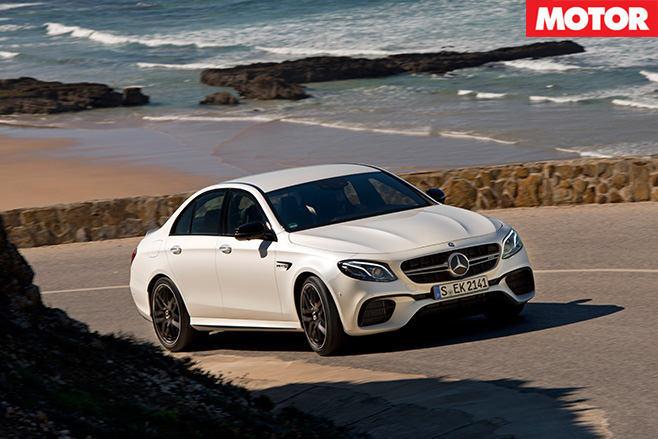 What’s new is a genuine love of being hurled at the scenery and the way it makes light and fun of situations that would have had previous E63 generations flaring the ESP in damage control.

The front end is reliable and accurate, and though the steering doesn’t give much feel it counters with a nice heft. The whole car feels like it’s incredibly accurate to your steering and weight-transfer touches.

The centre and rear diffs are so sharp now that you can use the back end to help rotate into a corner and then hook it up with brutal acceleration on the way out again, even in the wet.

Get it right, which is most of the time, and the whole thing feels like it has a two-metre wheelbase on turn-in and a five-metre wheelbase whenever it starts to slide. It’s just so controllable, all the time, and so enjoyable to push to and beyond its limits that it’s actually difficult to reconcile with the badge. 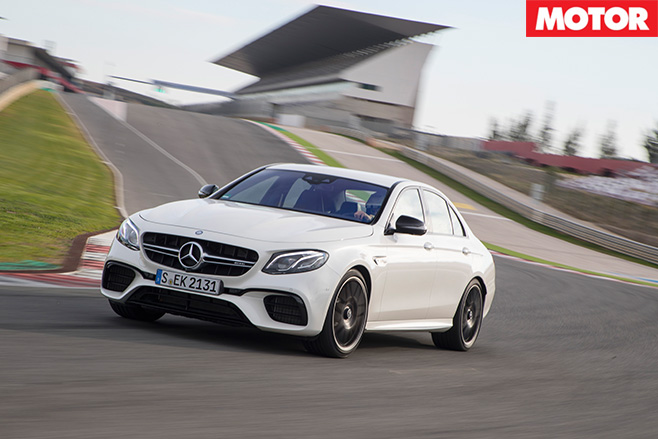 Snap the throttle open coming out of a corner and it will sometimes fall into understeer. Open it more gently, with more discipline, and you move into a special zone; a place where you can deliver the most gorgeous, absolutely controlled, wickedly fast four-wheel drifts on the way out.

It’s so reliable, fun and predictable that the ESP button almost becomes redundant, except as a thing to keep guest drivers in line when you’re not around.

There are times when it can feel all of its 1880kg, especially if you’ve not managed the turn in correctly on a tight corner, but mostly it feels lithe and far lighter, and it helps, too, that the brakes are phenomenally strong. 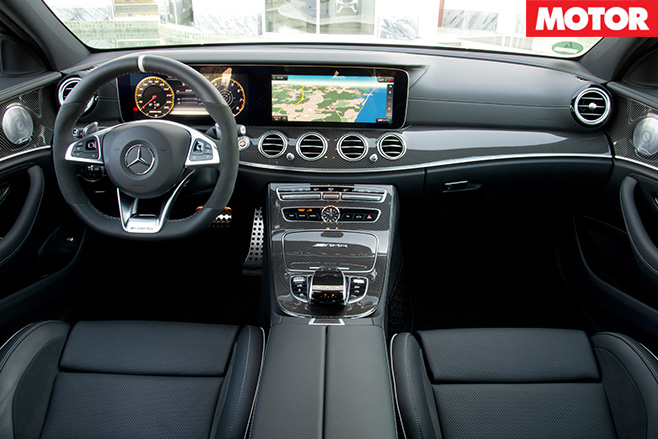 Its interior benefits from the E-Class’s massive leap forward, and AMG gives it a few luxury tickles and some software ones.

The best of them is a new connected app that lets you transfer stuff to and from your smartphone, though the annoying one is that it drops out the navigation the instant you put your phone on a cable into the USB port. That’s a bit annoying and they’re working on it.

You can switch between displays on the enormous dash screen, but the best of them is in Race mode, when you ratchet up the good stuff. 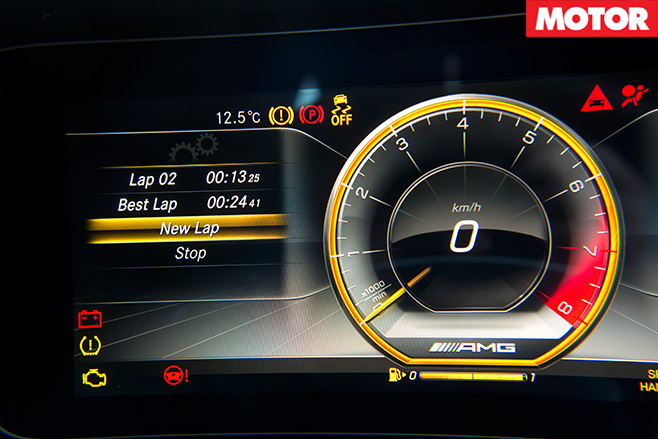 Besides a lap timer, there car gives you sector times, the ability to record your 0-100km/h times, plus speed, longitudinal and lateral acceleration, braking and even steering angle data.

The leather, powered seats are comfortable on long highway drives and just as comfortable slicing through mountains, and the steering wheel seems nicely sized as well as being nicely weighted.

There’s an odd point at night where the start button doesn’t dim, but reflects off the windscreen like some moon you are always chasing. The ABS also does a bit of old-school springback if you hit a sharp bump under brakes and takes far too long to deliver full braking power again.

And the PreSafe braking system slices you in half with the seat belt every time you attack a corner, too. But that’s it for genuine gripes. 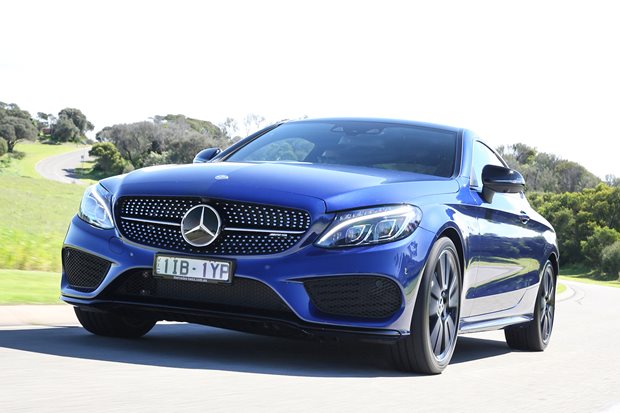 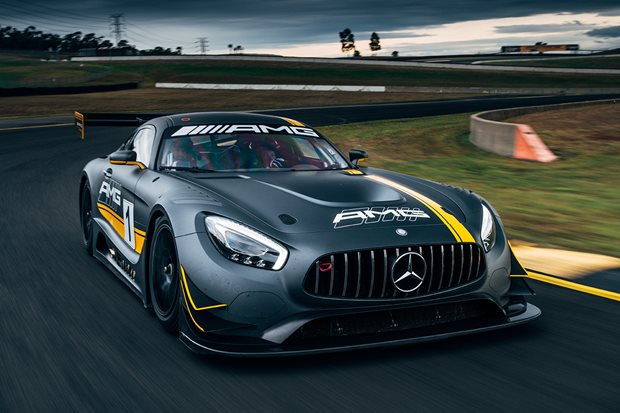 Fancy yourself for the Bathurst 12 Hour? Prove it 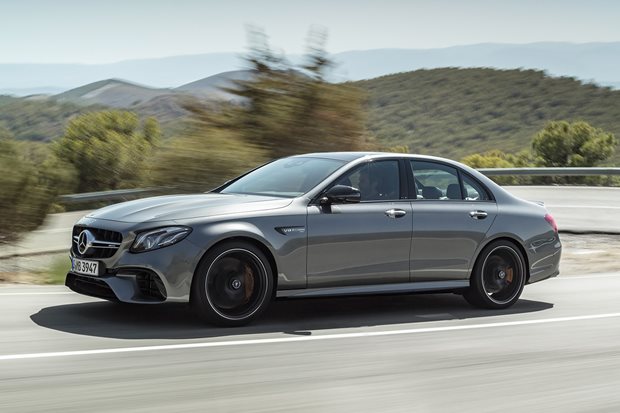 Mercedes-AMG has lifted the lid on its newest and most powerful E-Class models ever, the E63 and E63 S. 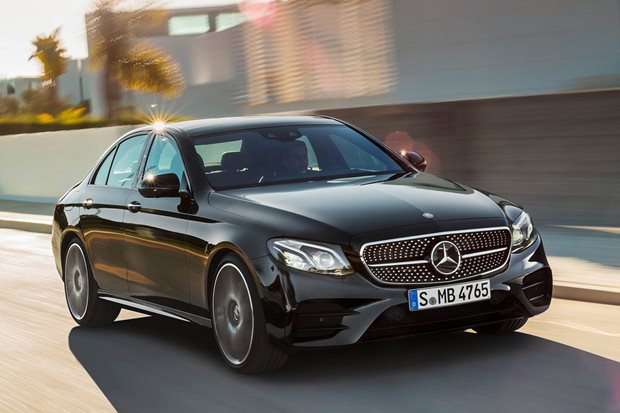 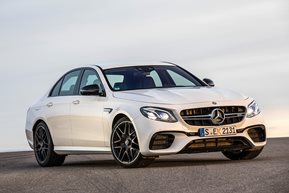