THE Mini name is something of a misnomer in the case of the Countryman, which swells in size with this second-generation model to become the biggest ever vehicle to wear a Mini badge on its snout. Mini by name but definitely not mini in nature, the new Countryman actually shapes up as one of the brand's better products in its present-day showroom.

WHAT IS IT?
Mini’s second-generation Countryman ditches the “overgrown hatch” packaging of its predecessor for more sensible SUV proportions, stretching and morphing into the biggest Mini model yet in the process. Priced from $39,900 it ain’t cheap as far as midsize SUVs go, but Mini has high hopes for its biggest model ever.

WHY WE'RE DRIVING IT
Luxury SUVs are steadily growing their slice of the overall SUV market, and Mini is keep to capitalise on that with the new Countryman. Though it’s “mini” in name only, the new F60-generation Countryman is actually a pretty compelling option now that Mini has refined its soft-roader formula.

MAIN RIVALS
Mini lists a fairly broad spectrum of rivals for its all-new Countryman, from the thoroughly mainstream Nissan Qashqai to the Mercedes-Benz GLA. Realistically though, we’d expect punters to line it up against the likes of the just-launched Audi Q2 and higher-spec variants of the Volkswagen Tiguan.

THE WHEELS VERDICT
The Countryman, originally derided as the least "on brand" Mini model, is actually a pretty decent rig. In fact, out of the modern Mini stable it’s probably the most well-rounded offering – and arguably the most relevant to today’s new-car buyer.

The value equation has been nudged in the right direction and the 2017 Countryman is particularly keen buying at the lower end of the model range, but the further up you go the less compelling it becomes. Don’t worry, though – just stick to the base model and you’ll find much to love.

THE WHEELS REVIEW
PINNING a “Most Improved” ribbon upon anything (or anyone) is something of a back-handed compliment, isn’t it. It is simultaneously an acknowledgement of growth, excellence and improvement, while also being an admission that the ribbon-bearer was previously, well, a little bit shit.

And that’s the situation we have here with the Countryman. The outgoing model was far from segment-leading thanks to nonsensical packaging that put an emphasis on style and little else, but its box-fresh replacement lands so close to the bullseye that Mini deserves praise.

For starters, it now represents a great deal more value when you balance its retail price against its spec sheet. Mini Australia says there’s now $6500 worth of extra equipment in the entry-level Cooper Countryman, which is handy, given it’s $3400 dearer than the outgoing auto base model. Key additions to the standard specification include a hands-free power tailgate, autonomous emergency braking, and keyless entry and active cruise control, so we’re not just talking about free floormats here.

But the bigger news is the packaging. Thanks to a 75mm wheelbase stretch, a 33mm width increase and 11mm taller roofline, those in the back now enjoy plenty of sprawling space. The rear bench slides fore and aft as well, while the backrest reclines for extra long-distance comfort. The rear doors open wider as well, easing entry and egress. And remember that silly rail that extended behind the centre console in the first-gen model (and was quietly nixed from the spec sheet afterward)? It’s gone. Mini has learned that being unique and individual isn’t necessarily a blessing in the car game, especially when it comes to utility-driven SUVs.

Front seaters aren’t ignored either, with even the base Cooper scoring a pair of well-bolstered and supportive seats clad in an appealing corduroy-esque fabric. The front hip point is also 90mm higher than the Clubman, which is nice if you like to perch over your fellow motorists.

Compared to other SUVs though, it’s still comparatively low-slung. 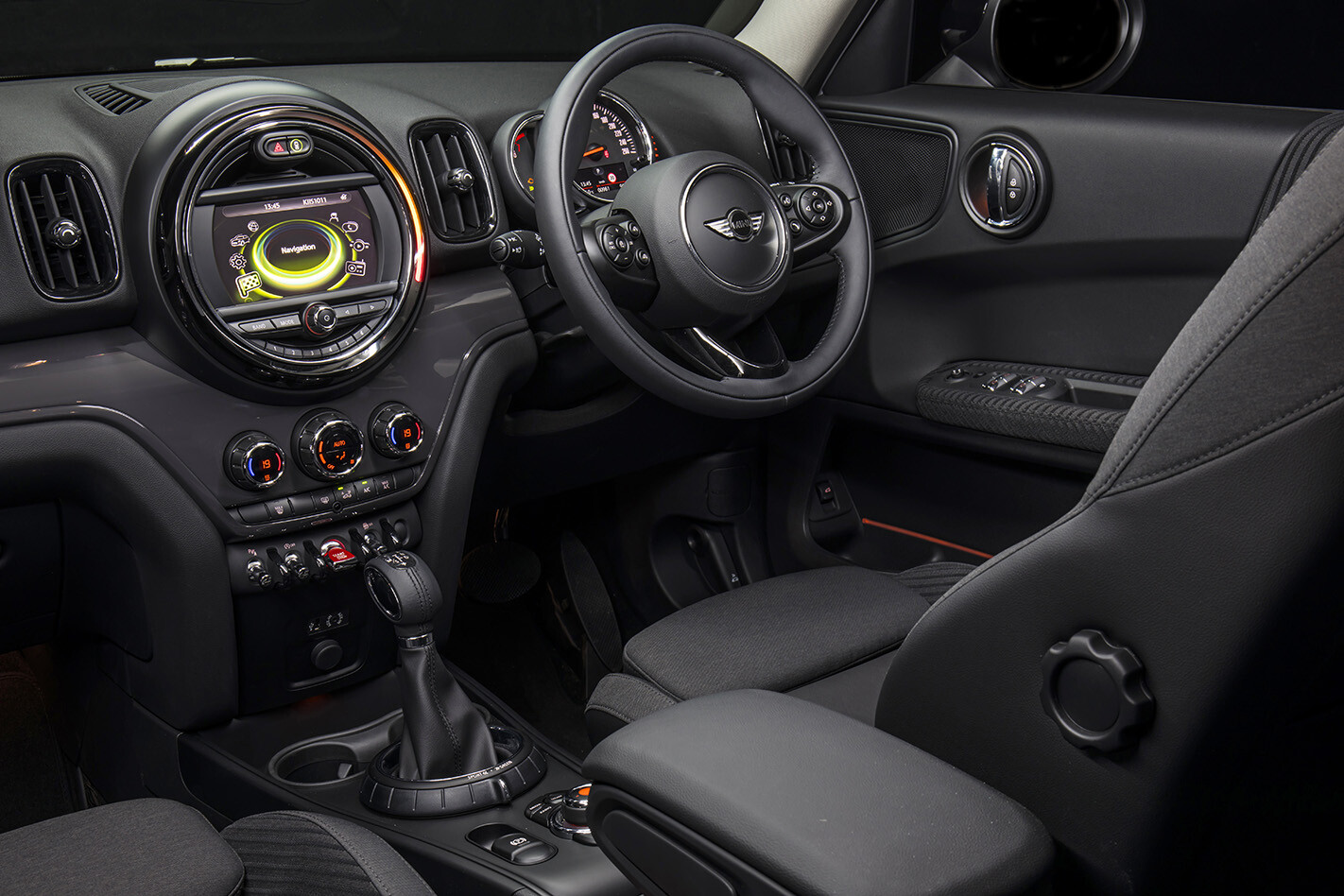 The absence of power front seats on top-end Cooper S and Cooper SD may raise your eyebrows considering the $45k-plus pricetags, but they’re not such glaring omissions for the base Cooper.

Venture inside, and the interior takes on a newer, more modern aesthetic than the self-consciously retro design of the outgoing model. There are more horizontal design elements, while the circular central infotainment housing still pays tribute to the Mini brand's origins while the execution and material selection is more contemporary and high-end.

It’s a more mature look, and a nicer place to be. It’s lost the toy-like feel of the old Countryman. Driveability is another area where Countryman improves on prior form. The previous base model’s 1.6-litre atmo petrol is retired in favour of BMW’s now-familiar 1.5-litre turbo triple, with 100kW and 220Nm proving sufficient for a Corolla-esque 9.6-second 0-100km/h sprint.

A six-speed auto is the standard shifter rather than an unpopular manual, and it works well with the three-pot.

Other models get an equally well-sorted eight-speeder, and your choice of a 110kW/330Nm 2.0-litre diesel, a gruntier 140kW/400Nm version of that same engine or a zingy 141kW/280Nm 2.0-litre turbo petrol. Only the high-output diesel of the Cooper SD Countryman gets all-wheel drive; the rest are bum-draggers. 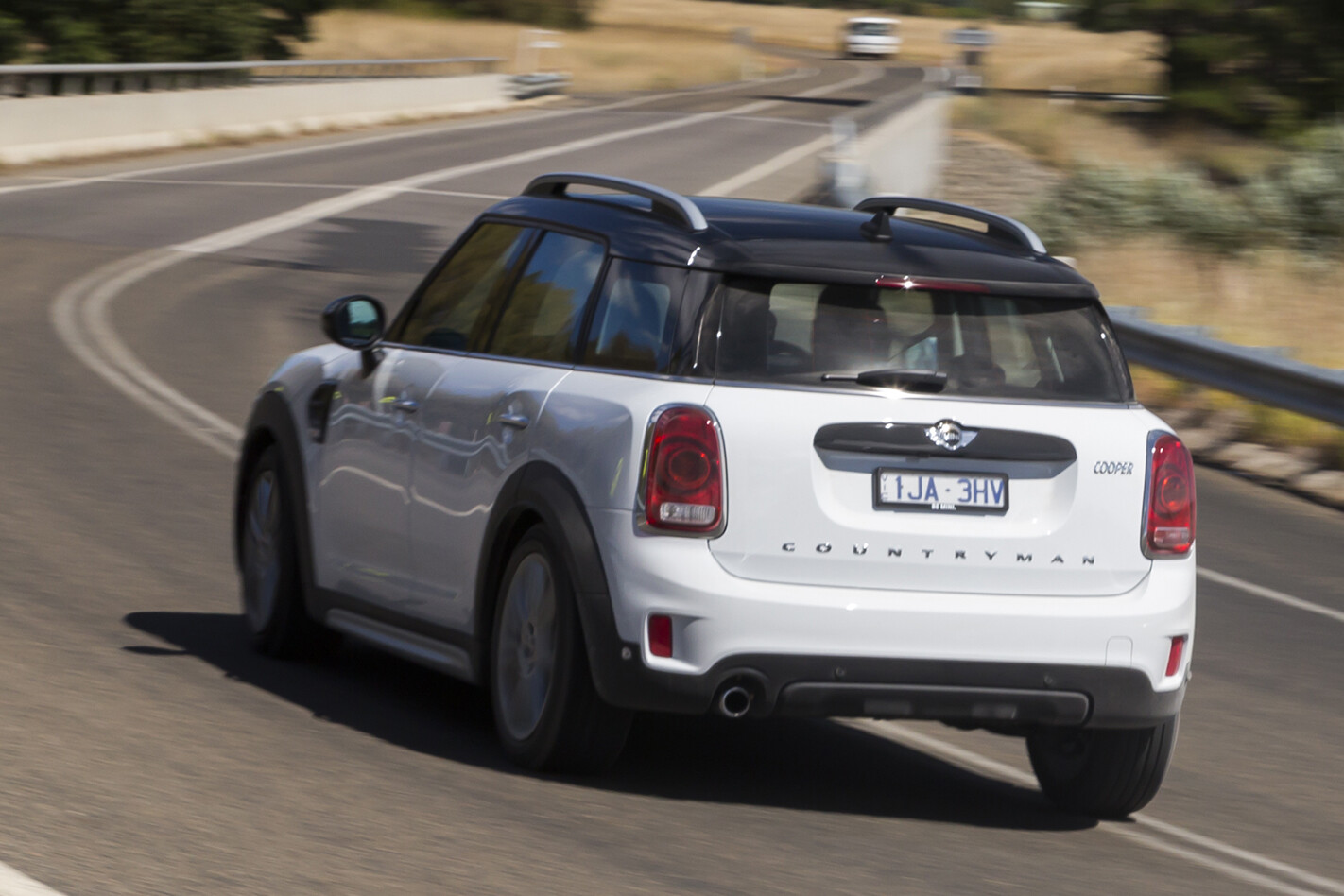 Out on country roads, the Countryman proves more compliant than its platform-sharing corporate cousin, the BMW X1. Steering feel is better than the Bimmer too, though optioning 19-inch alloys imparts a sharp ride and plenty of road noise. Mini continues to insist on equipping its models with run-flats, and harshness is the inevitable result.

But the foibles are few, and the Countryman has, in its second generation, given Mini its best chance at shrugging off the "niche" stigma and becoming a brand with true mass market appeal. We’d take one over an X1, and that’s not a conclusion we were expecting to come to.