NISSAN’S large seven-seat SUV option is the Pathfinder, and the top-shelf Ti grade, reviewed here, is the most well-equipped, most luxurious and most expensive Pathfinder on sale.

However the Pathfinder hasn’t had the greatest standing with Australia’s motoring media since the current-generation arrived Down Under, with ride and handling being at the top of the list of complaints. 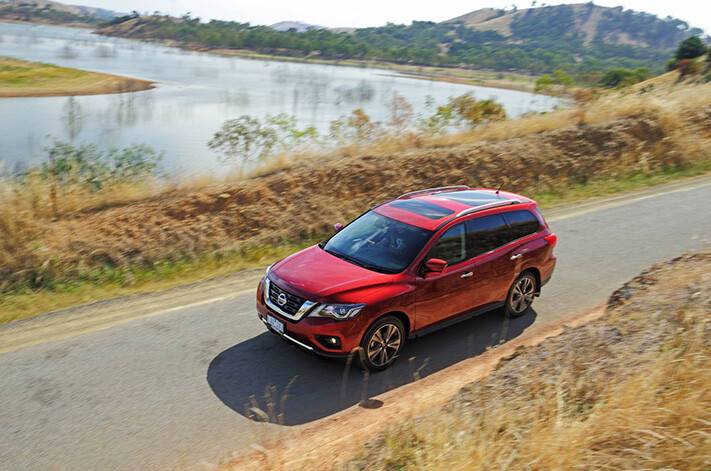 Nissan listened, and the 2017 update features changes designed to address those concerns.

On top of that, there’s also a fresh new face and more safety and infotainment equipment than before. So, how does it stack up now?

Measuring just over five metres in length, the Pathfinder is massive. Bigger than a Toyota Kluger in every dimension and only a smidge smaller than the Mazda CX-9, the Pathfinder’s greatest strength is the sheer amount of space it offers. With three rows of seats – all of which can be occupied by adult passengers – the Pathfinder is built for families. With a beefy 190kW and 325Nm 3.5-litre petrol V6 under the bonnet, it definitely has the muscle to move your clan too.

And retailing at $66,190 for the top-range Pathfinder Ti all-wheel-drive tested here, the top-grade Pathfinder has a strong price advantage over comparably-equipped rivals like the Toyota Kluger Grande and the Mazda CX-9 Azami.

For Aussie families with two or more children, large three-row SUVs have long been the vehicle of choice thanks to their comfort, size and seating flexibility.

The Pathfinder has been around in its present form since 2013, when it switched from being a utilitarian 4x4 based on the Navara ute to a more car-like wagon. However, slightly soggy on-road dynamics and less-than-competitive equipment levels hurt its sales prospects in Australia. 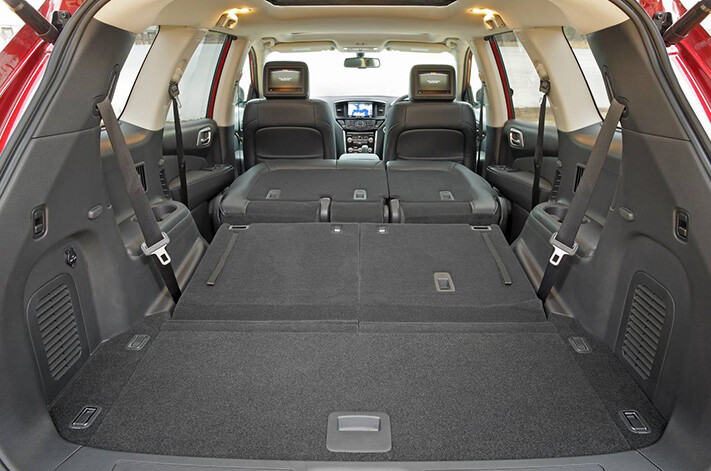 This 2017 update aims to rectify that, with suspension tweaks and more gear now applied to Nissan’s sizable family hauler.

From the commodious and power-adjustable front seats the Pathfinder gives you a commanding view of the road ahead, while the big Nissan’s high hip-point elevates your eyeline well above traffic.

Concerned about managing all that bulk? Thankfully, a top-down 360-degree camera view helps take most of the guesswork out of parking Nissan’s big bus. Technology-wise, it’s a mixed report card. On the one hand the Pathfinder doesn’t really push the envelope in terms of sophistication, with dated satellite navigation graphics and a clunky infotainment interface, but in the Ti model you do get rear entertainment screens to keep your passengers occupied on long journeys as well as tri-zone climate control and cooled and heated front seats.

Those rear screens, by the way, can each play a different video simultaneously – just the thing for keeping siblings from squabbling. The third row is fairly accommodating for teenagers and smaller adults and also features face-level air vents, while there’s a whopping ten cupholders and six bottle holders spread throughout the cabin.

A space-saver spare wheel is a definite downer though – bear that in mind if you’re planning on any long-distance touring.

First things first – Nissan has rectified most of the pre-update Pathfinder’s problems with the 2017 model’s rejigged suspension.

No longer does it feel marshmallow-soft and loosely connected to the road, and the ride shouldn’t induce sea-sickness in your passengers anymore. It’s not the dynamic leader of its segment – the CX-9 scores more points there – but it’s definitely a nicer car to drive now. The engine is slightly stronger as well, but to be honest the Pathfinder’s V6 never really struggled to lug family-sized loads before and the big 3.5-litre motor was already one of the Pathfinder’s best attributes, fuel consumption aside.

We welcome the extra muscle, but as before the petrol-only Pathfinder remains a thirsty machine.

The Pathfinder is a little more toned now that Nissan has had a second crack at its suspension, the result being a car that’s easier to live with, safer and better equipped.

However, it doesn’t go quite far enough. It can’t touch the COTY-winning Mazda CX-9 for overall polish and the Hyundai Santa Fe and Kia Sorento ride better and have more fuel-efficient diesel options, so for now the big Nissan remains a middle-of-the-pack option.