Audi updates its luxury large sedan, focusing on tech and improved dynamics to take on its established German rivals

AUDI has worked on the aesthetics, brain, brawn, and athleticism of its A6 sedan to bring it closer to its natural rivals. 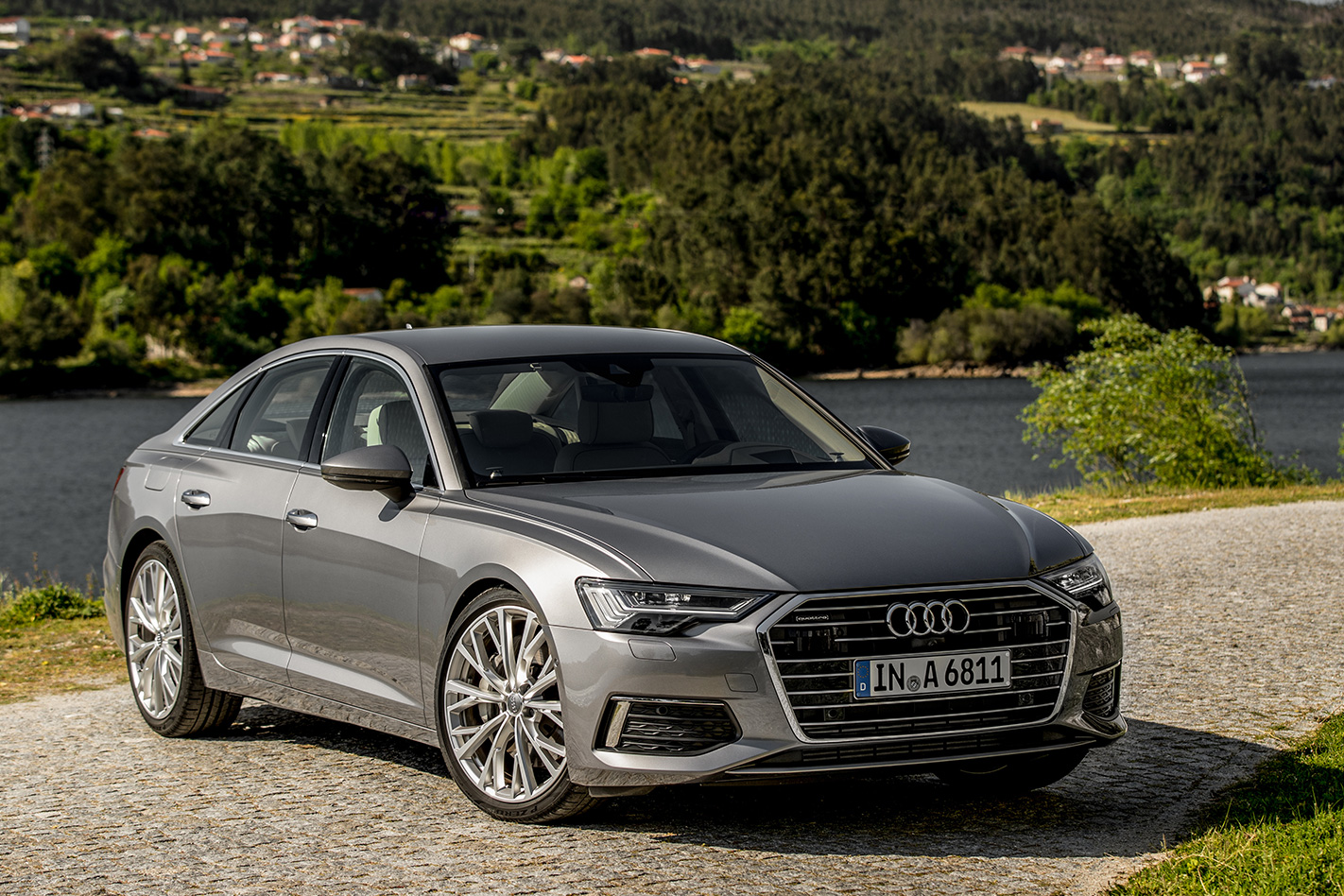 The first new Audi A6 since 2011, this fifth-generation model brings greater cabin space and a diesel-heavy engine line-up. Audi’s attempting to stand out from the crowd with the A6 by adding a mild hybrid system across the range and an all-wheel steering to the equation.

Wheels took the opportunity for a first taste of the C8 generation Audi A6 at its international launch in Portugal. Audi has been playing catch-up with its German rivals, BMW and Mercedes-Benz, and holds hopes the new A6 will be the ace up its sleeve in the large luxury sedan segment. 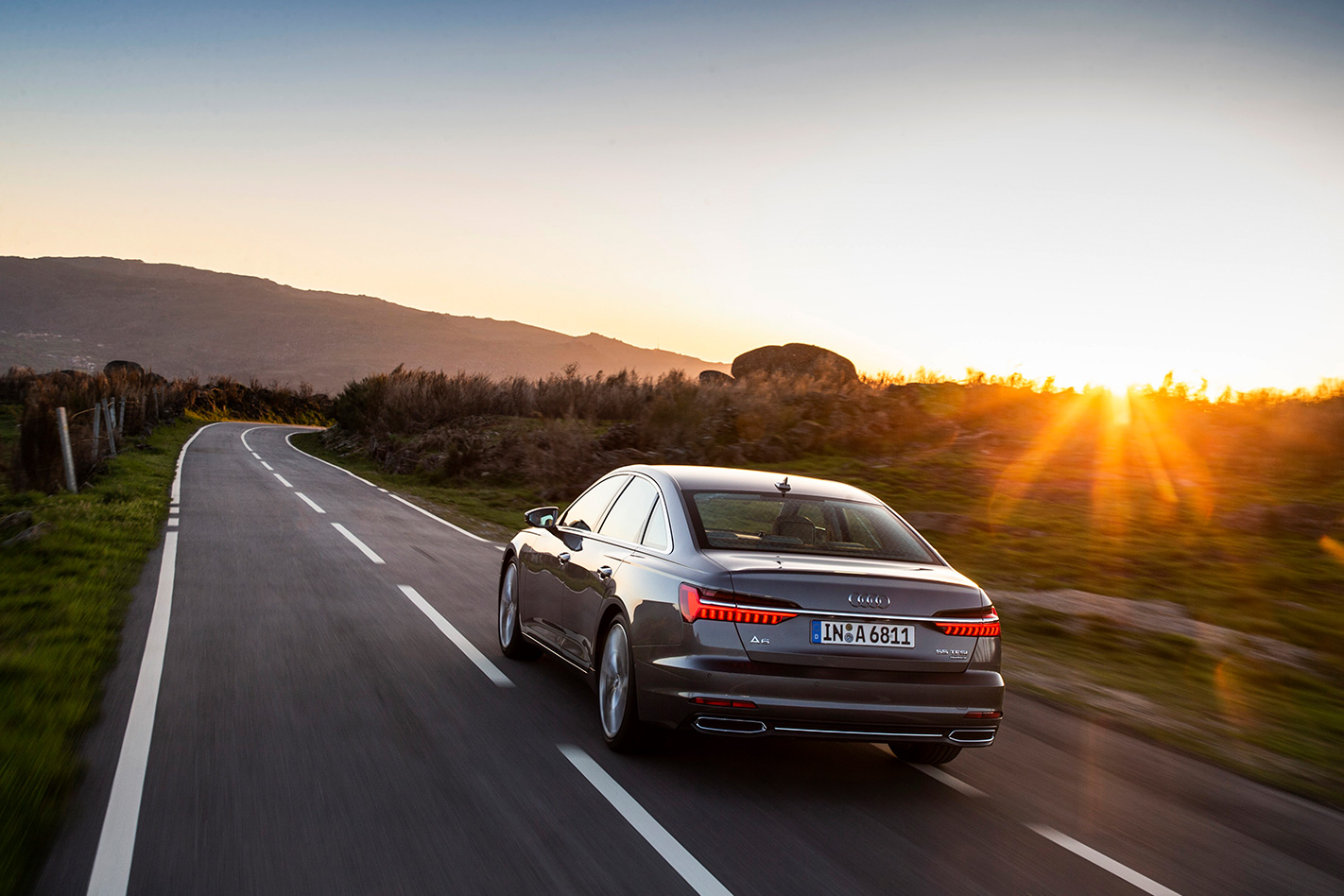 The BMW 5 Series and Mercedes-Benz E-Class are the A6’s core competitors. Euro luxe offerings such as the Jaguar XF and Volvo S90 are in the frame too.

Audi has built an A6 that is just as comfortable crushing kilometres as it is carving mountain roads. Gone is the old A6 quattro’s front-drive-esque experience, replaced with an athleticism that belies the car’s almost five-metre length. The addition of all-wheel steering adds depth to the A6’s dynamic character. The engine line-up isn’t particularly headline-grabbing, but for the most part the turbo petrol and diesel units are capable and refined, leaving headroom for performance halo versions.

TECHNOLOGY has advanced more rapidly over the last five years than in any previous five-year period in the history of the car, so the fact Audi’s C8-generation A6 represents what is arguably the model’s biggest advance yet is no surprise. 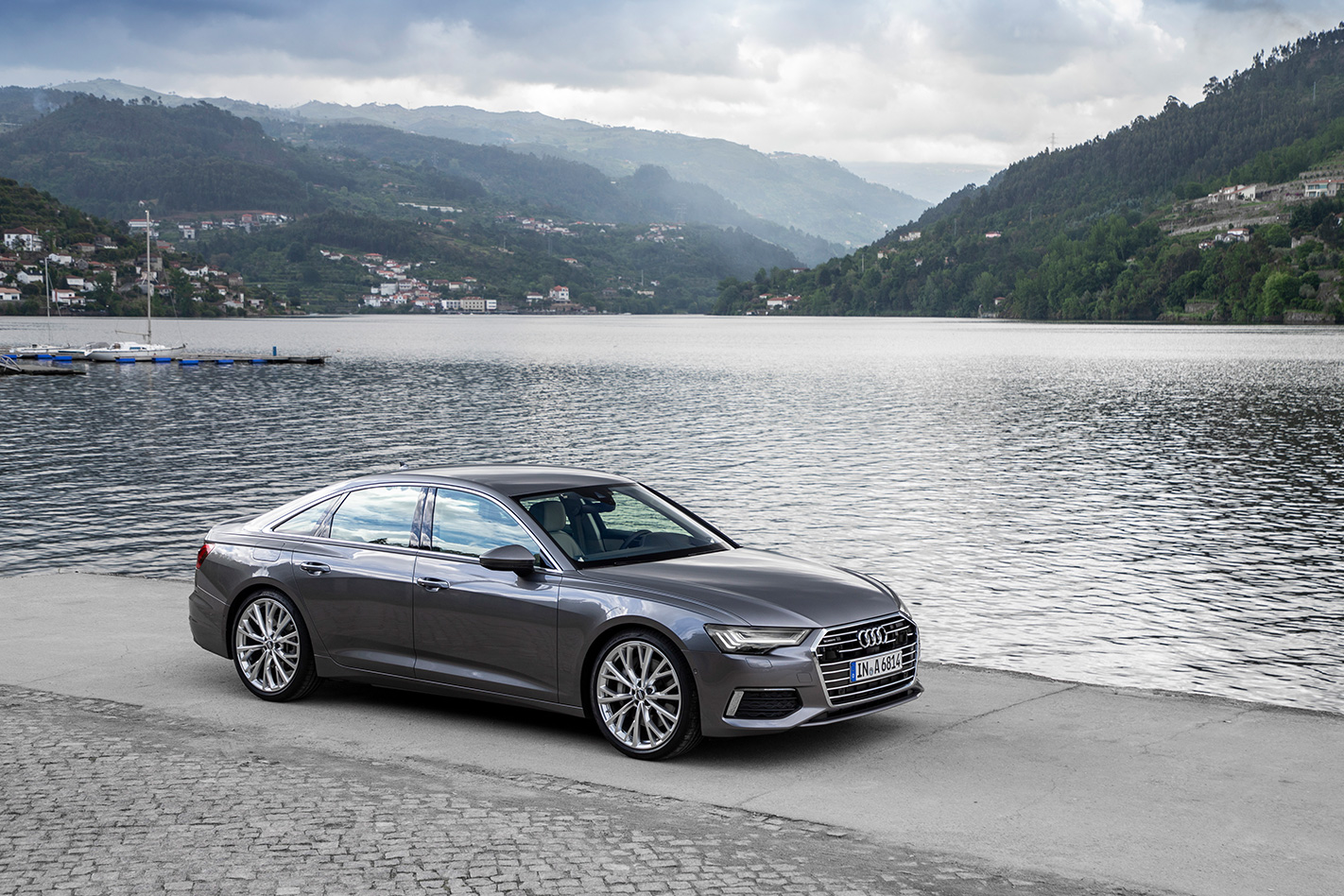 Now, it seems the A6 has caught up and is ready to play ball with traditional rivals, the BMW 5 Series and Mercedes-Benz E-Class, which both underwent generational leaps in the past two years.

Read next: 2019 Audi A6 breaks cover ahead of Geneva

Underpinning the A6 is a revised version of the previous chassis, built using the same MLB Evo modular matrix. Growth was kept to a minimum, with the 2018 A6 measuring just 7mm longer (4939mm), 12mm wider (1886mm), and 2mm taller (1457mm) than the previous generation. There is a more significant expansion inside, with 21mm added to the overall cabin length, 12mm of which is added to rear legroom. Head and shoulder room increase for all occupants.

As well as significantly improved dynamics, an influx of new infotainment and safety technologies catapult the new A6 up to date.

In Europe and North America, where BMW offers its xDrive all-wheel-drive system in mainstream 5 Series, and Mercedes its 4Matic system in the E-Class, Audi’s quattro no longer gives it a USP. Yet in Australia the availability of all-paw mid-range versions should still give Audi an ace.

The A6 introduces "Dynamic All-Wheel Steering", a four-wheel steer system similar to that offered by BMW in the 5 Series. 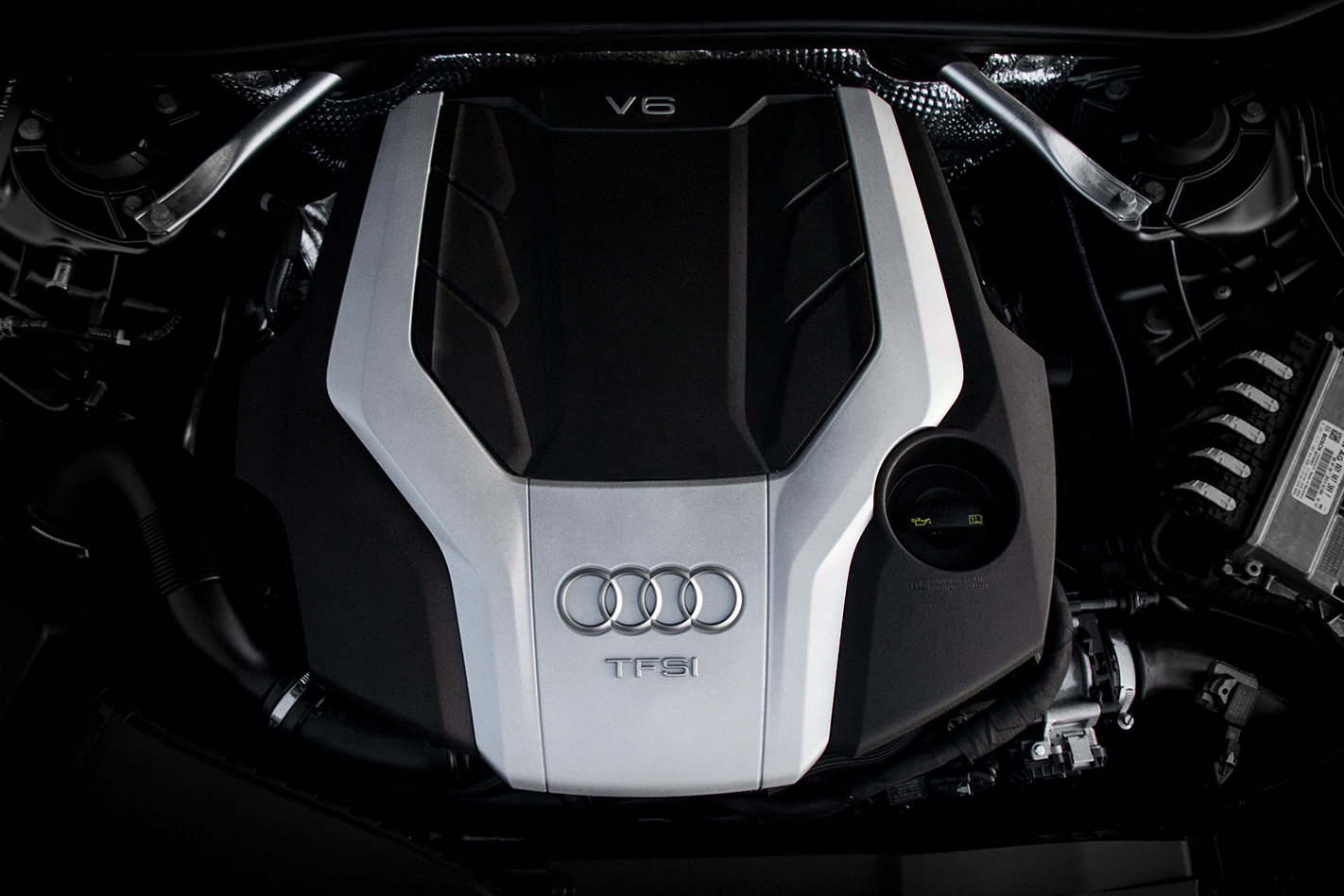 Even without the all-wheel-steer system, the A6 is a dynamically engaging car that rewards drivers prepared to hustle the big sedan. And while the Audi may continue to struggle to match the rear-drive dynamic flavour of its rivals, it’s a much closer fight now, with the front-drive-esque feel of previous A6 quattros banished. The car feels taut and eager to turn in.

A6s without the all-wheel steering get a direct-ratio electric rack, which is smooth and well-weighted, providing a good sense of how the front tyres are behaving while keeping kickback at arm's length. Tick the all-wheel-steer box, and you get variable ratio steering that attempts to optimise weight and response based on speed and steering angle.

The driving position is surprisingly low and sporty, with front passengers seemingly pushed outboard in the cabin. It’s easy to establish a real sense of connection with the A6. There’s a sensation that the chassis is pivoting somewhere under your knees, so quick and keen is the turn-in. A bonnet that slopes out of sight from the driver provides the uninterrupted view needed to get into maximum attack mode, despite the car’s substantial proportions and the very narrow Portuguese roads on the launch. 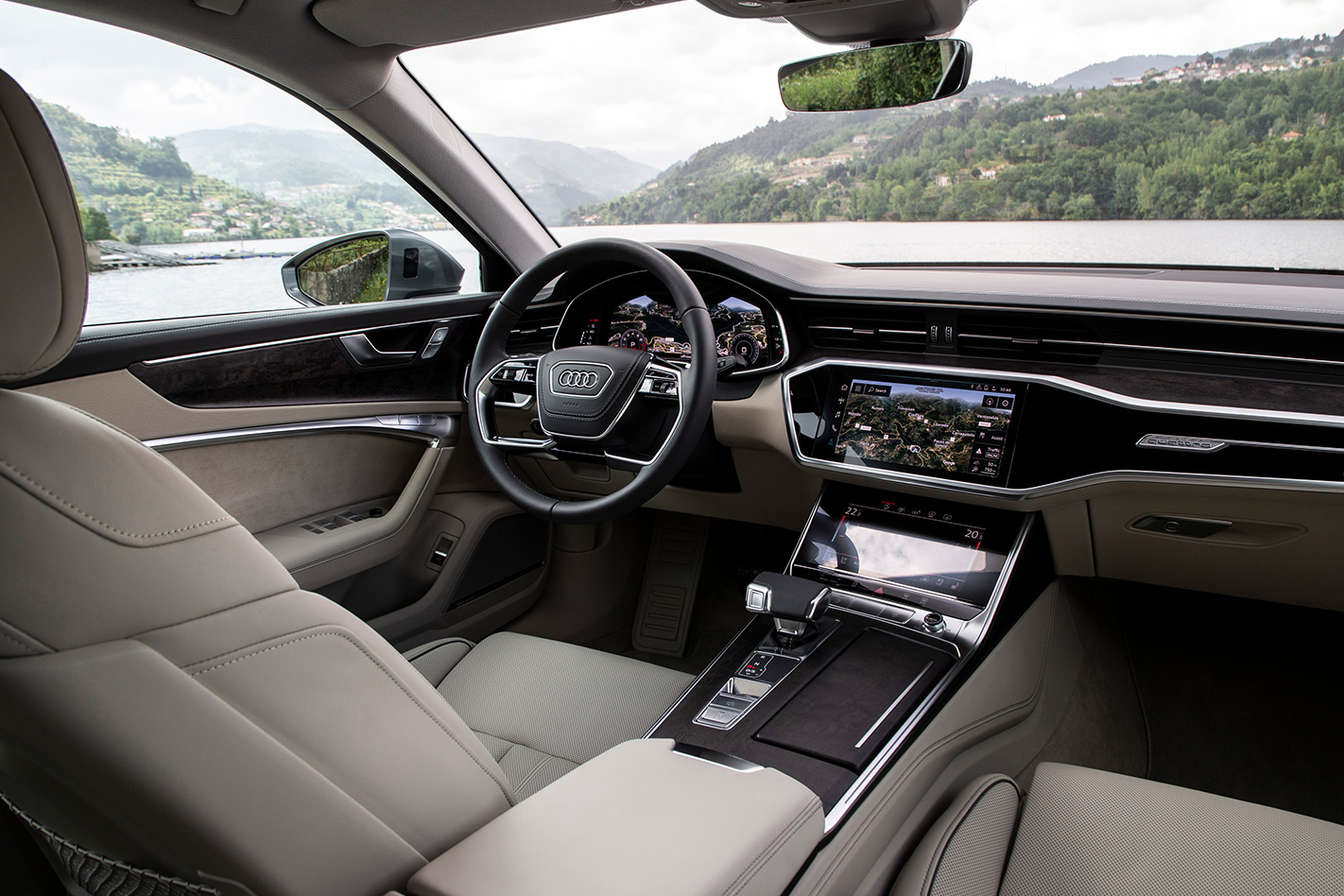 Riding on 19-inch rims, the steel-sprung A6 delivers ride suppleness, yet without the lateral lean you would associate with a soft suspension calibration. However, increasing the rim diameter on this suspension eats away at the A6’s ability to iron out a bumpy surface.

With the air suspension, even on 20s, the ride was at its most impressive. The level of absorbency felt similar in comfort and dynamic modes, the difference being a reduction in body roll in the sportier setting. However, on the largest 21-inch wheels, in dynamic mode, the air suspension can’t entirely mitigate the slim sidewalls.

The most powerful engine at launch is the 55 TFSI 3.0-litre turbo petrol V6, with 250kW and 500Nm, mated to a seven-speed dual-clutch transmission. 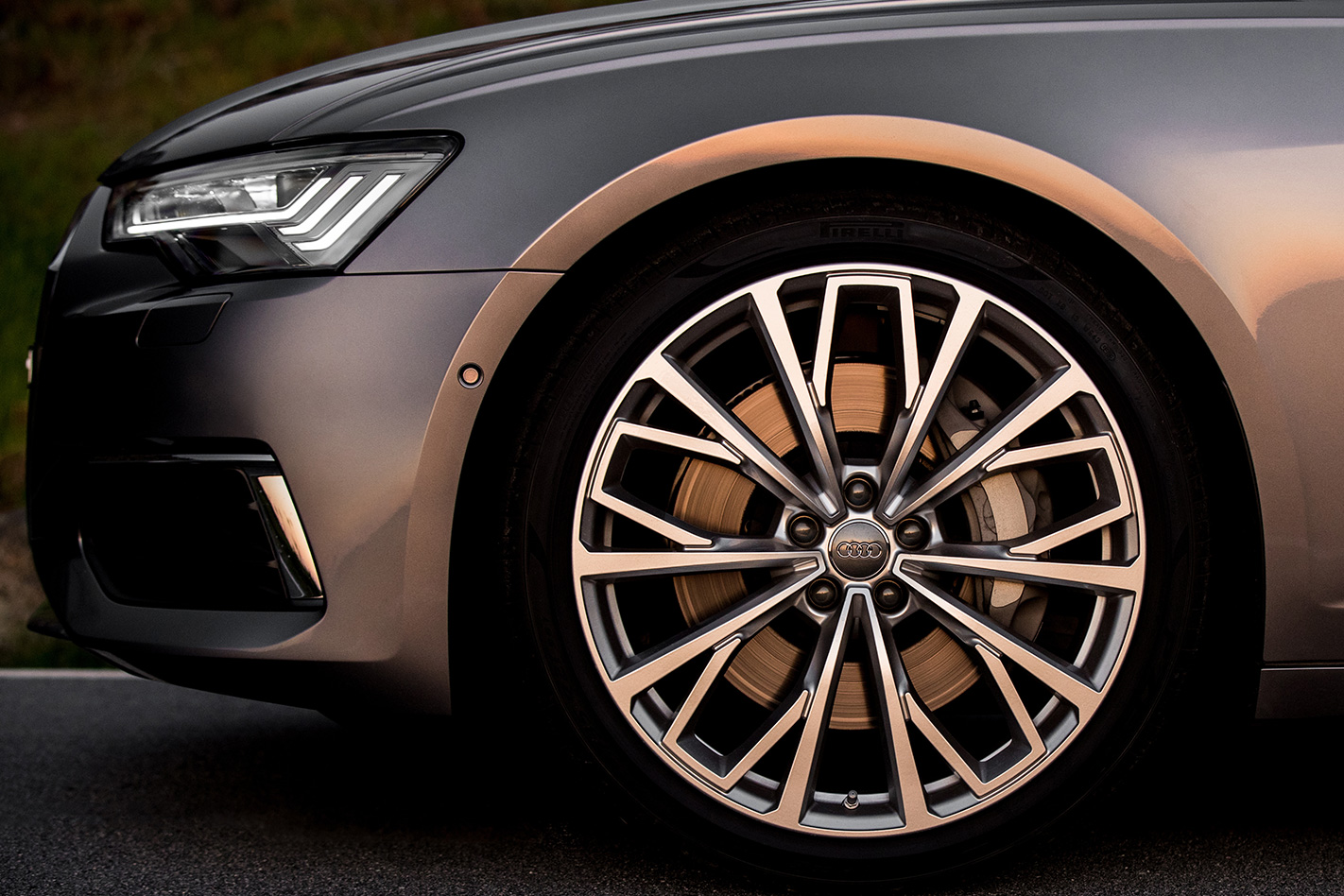 Sitting at the entry level is the 2.0-litre turbo-diesel 40 TDI four, with 150kW/400Nm, paired with a seven-speed dual-clutch.

Read next: Top five exciting cars still to come in 2016

Audi Australian has not yet confirmed the local engine line-up, though it has said the diesel engines are a high priority, and that the 55 TFSI petrol may not make our shores. If that is the case, anticipation will be high for the eventual arrival of a (likely twin-turbo) S6. (Audi employees stubbornly refused to confirm or entertain the notion of such a variant, despite its two decade-plus history.)

Of the engines at launch, the 50 TDI was the sweet spot. While the 55 TFSI makes 40kW more than the diesel, that advantage isn’t as noticeable as the extra 120Nm in the oil-burner’s pocket. Both V6 engines are refined, their synthesised throaty note surprisingly pleasing.

Despite Audi saying the 2.0-litre’s aluminium crankcase helps minimise the engine’s noise (and saves 20kg in the process), the smallest capacity engine is the most intrusive. The turbocharger is rather vocal throughout most of the rev range, and the classic diesel rattle is more prominent compared with the V6 units.

Audi Australia is still working on local specification for the A6, with Australian A6s likely to be generously specified compared with Euro-market cars. Likewise, it wouldn’t be drawn on local pricing but did confirm that the A6, originally expected in Q4, won’t be arriving until 2019. 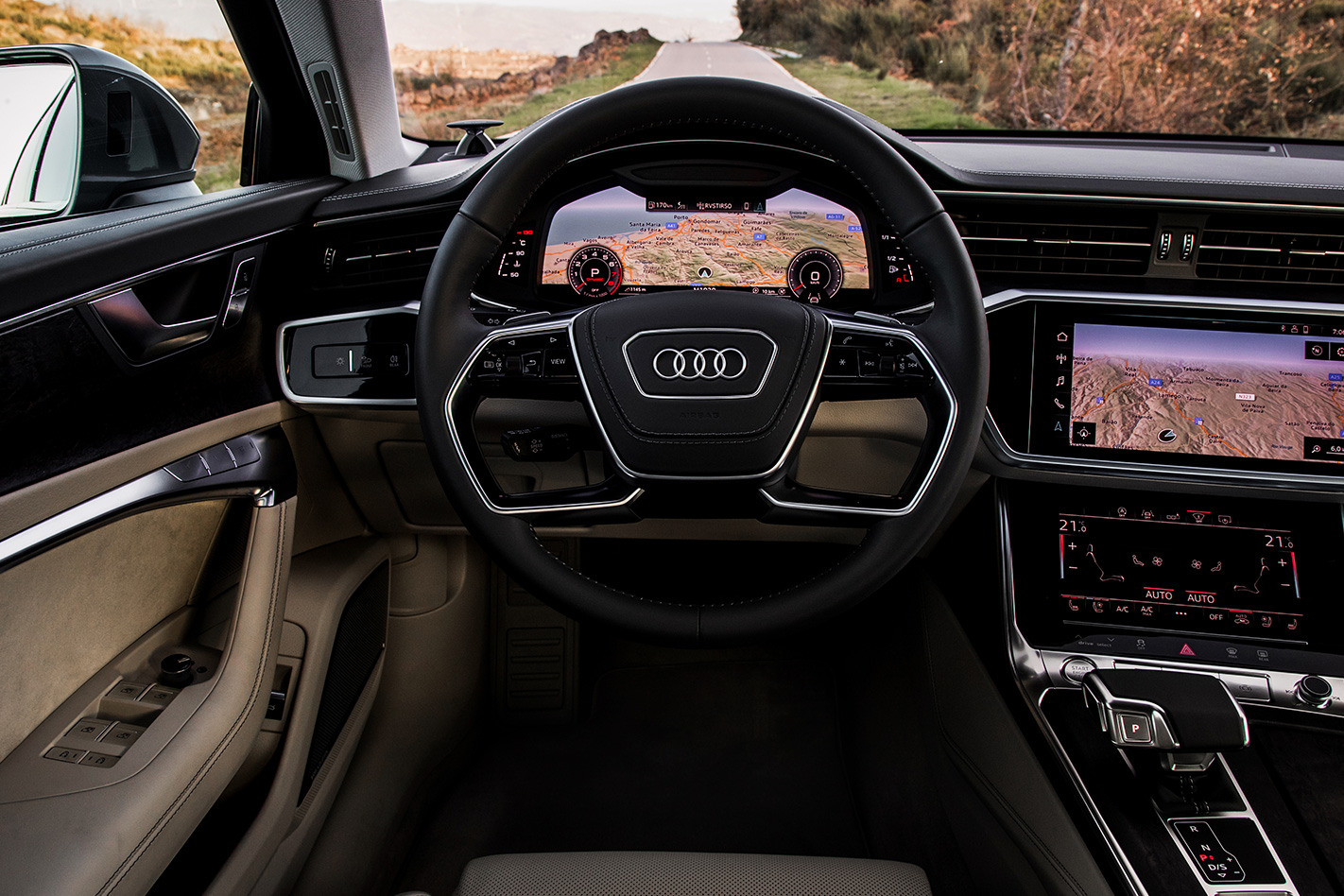 Every car at launch had Audi’s quattro all-wheel-drive system, with an electronic centre diff. Christian König, project manager for the A6, told Australian media the lower-spec 2.0-litre four-cylinder would be available in front-drive form in certain markets, just as the current A6 is on the local market.

Inside, the cabin is generously trimmed in leather and suede and finished with brushed metal. But the real centrepieces are the digital touchscreen displays – the two centrally mounted screens are a tech delight. Up top is a 10.1-inch unit for all your infotainment, navigation and phone-pairing needs, while the main duties of the 8.6-inch unit in the lower console are climate control adjustment and providing a keyboard for text inputs. A 12.3-inch LCD display with an updated version of Audi’s virtual cockpit system replaces analogue instruments.

Audiophiles will be pleased to hear that Bang & Olufsen has continued its partnership with Audi, fitting the A6 with a chest-thumping 1820-watt, 19-speaker sound system.

Every variant supplements its internal combustion engine with a mild hybrid system. On the four-cylinder this is a 12-volt system, and for the diesel and petrol V6s a 48-volt system. 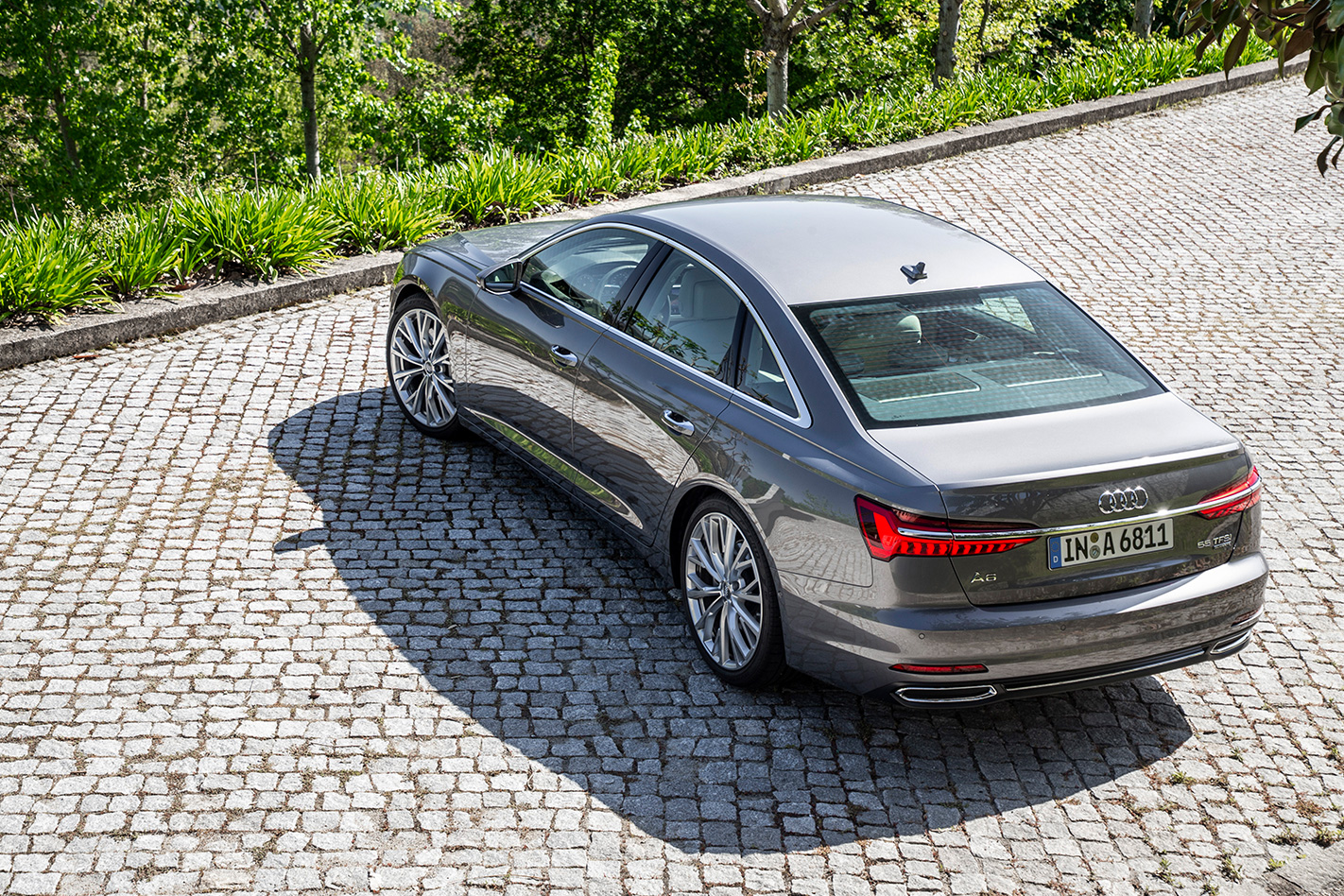 The mild-hybrid is essentially a heavy-duty stop-start system that can supplement engine torque to propel the car (above 22km/h), and the A6 also gains the ability to coast off-throttle for up to 40 seconds between 55km/h and 160km/h. Audi claims that combined, this can improve fuel economy by as much as 0.7L/100km.

With advances in efficiency, technology and dynamics, garnished with Ingolstadt’s signature interior class, this new model represents a significant step, positioning the A6 to properly turn the heat up on its rivals. 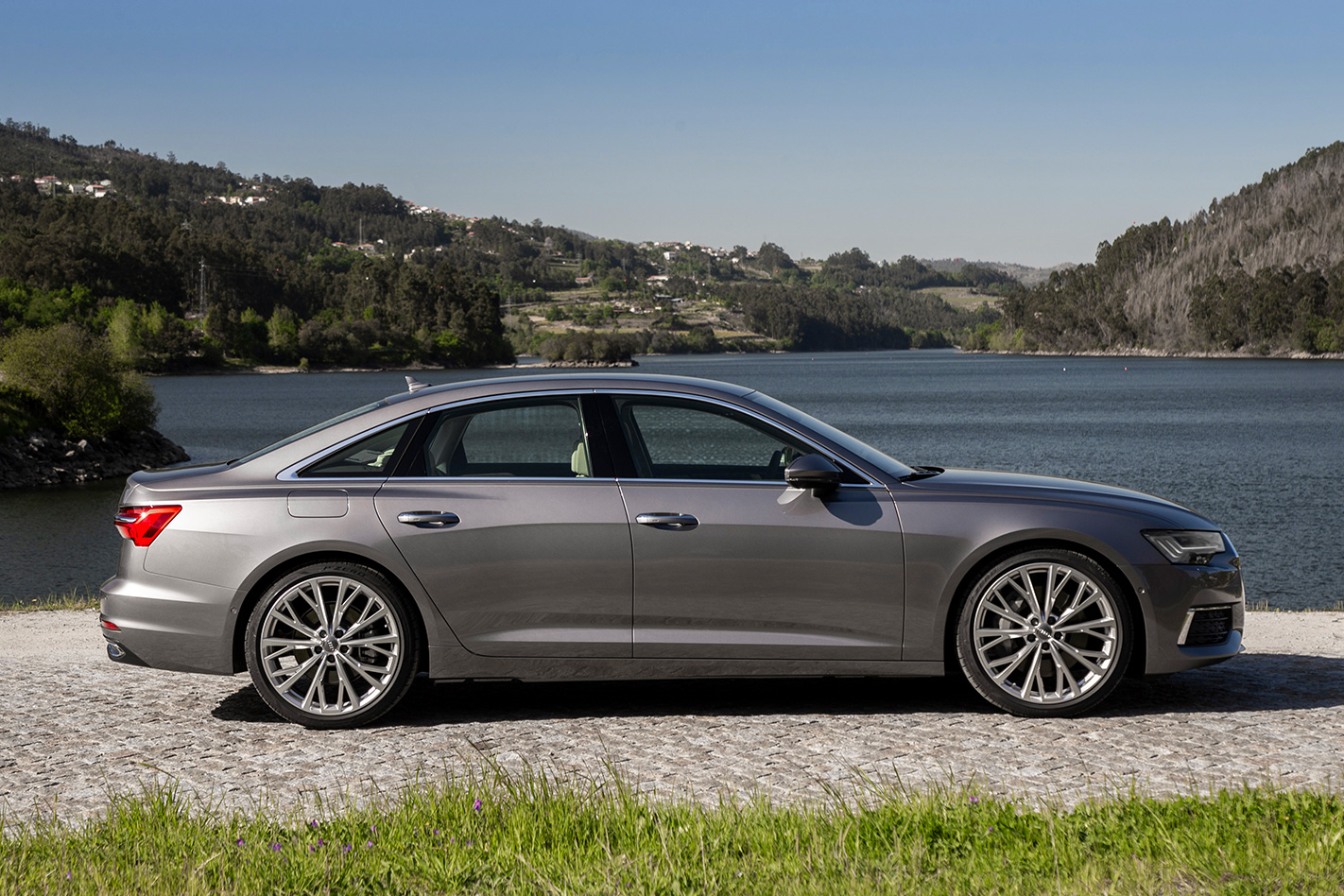 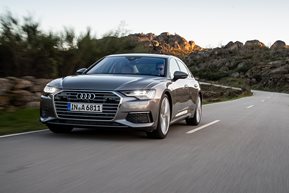 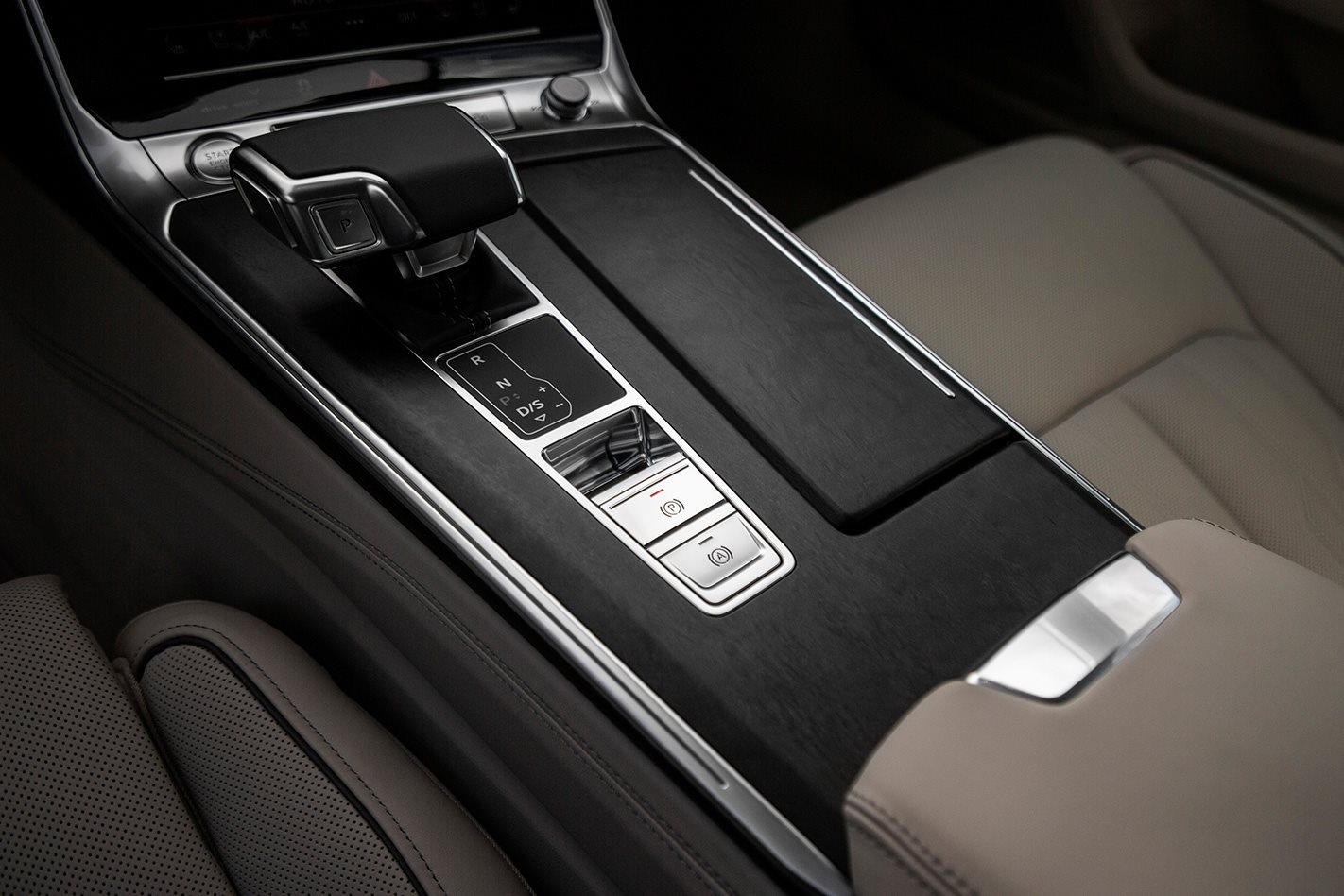 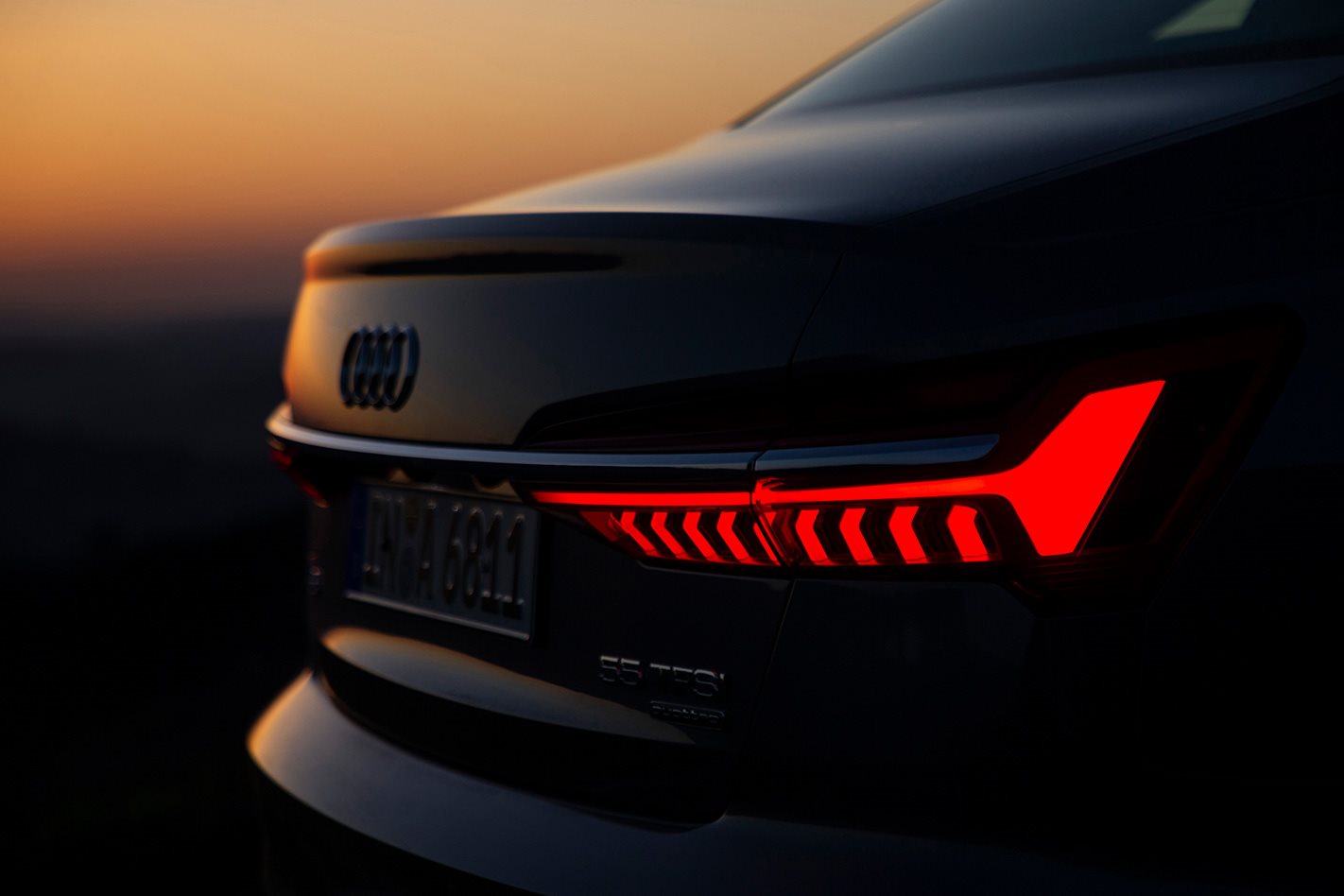 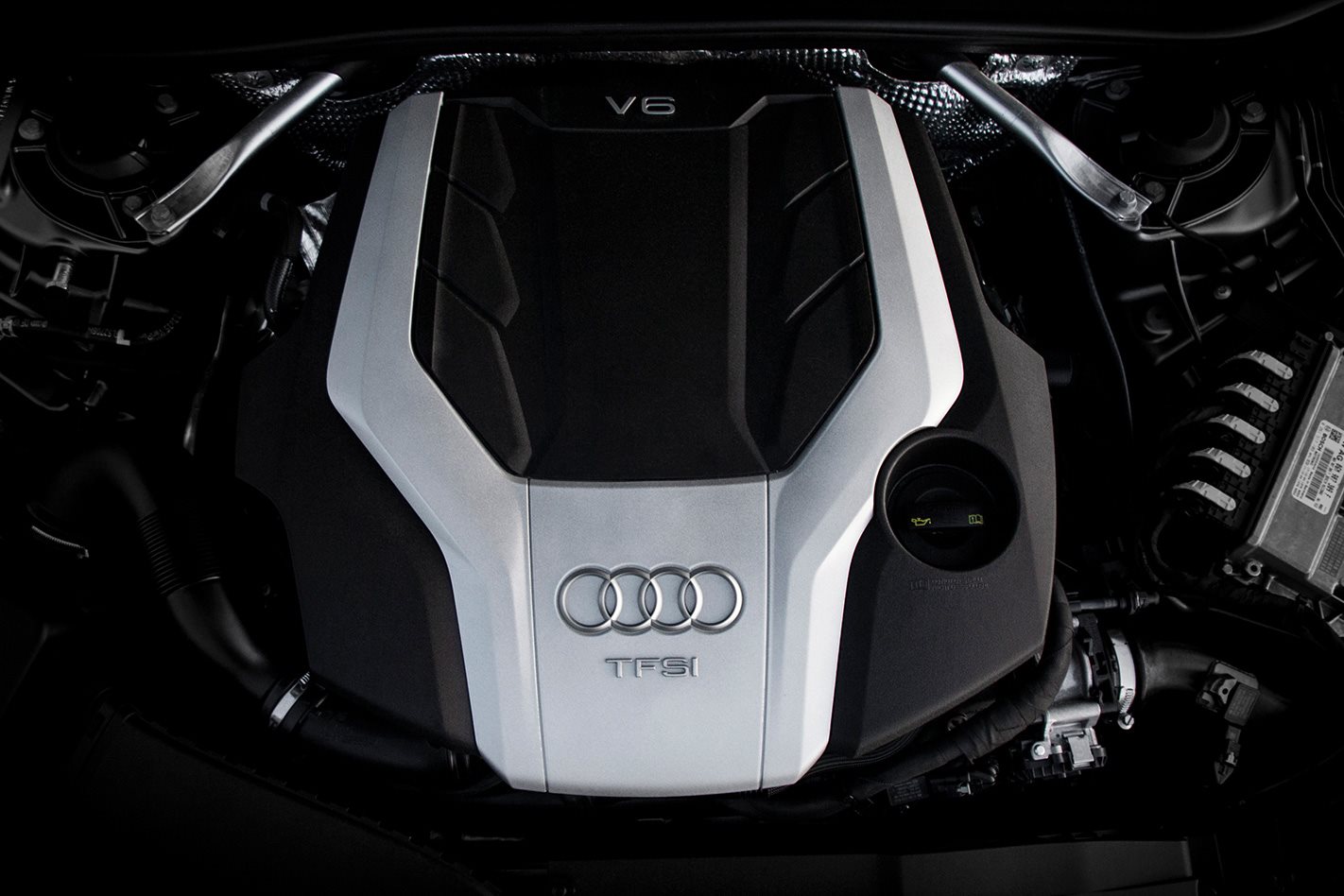 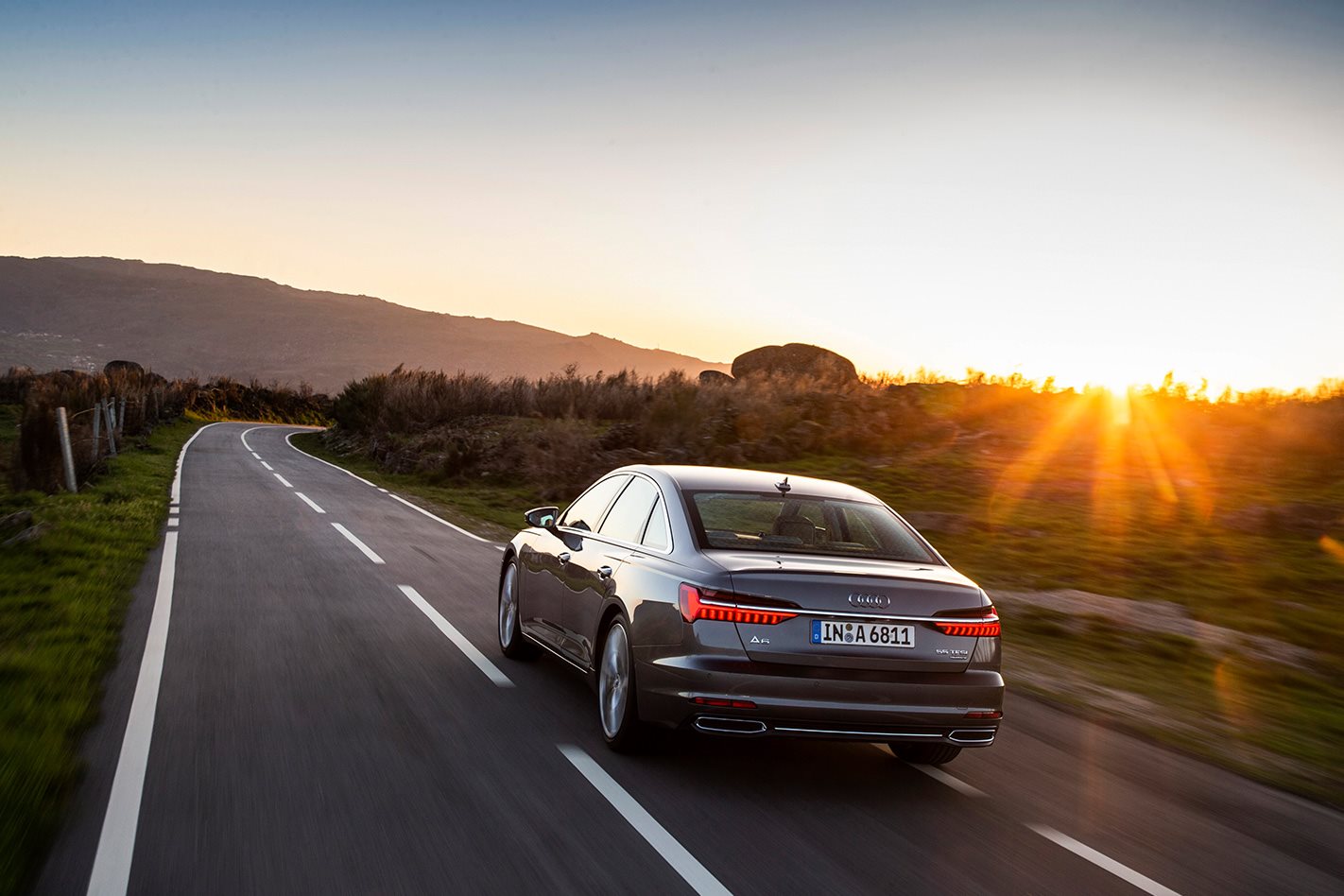 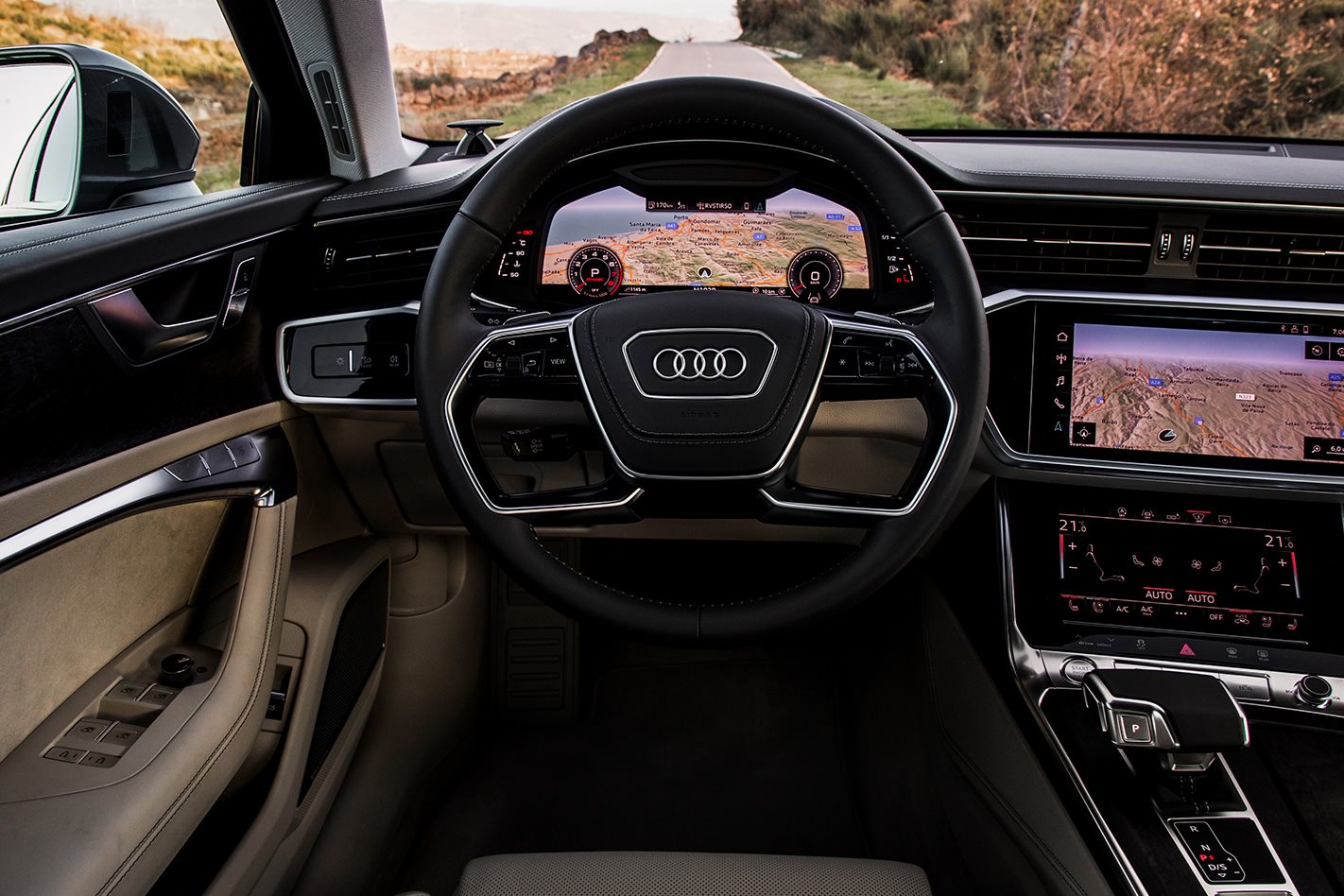 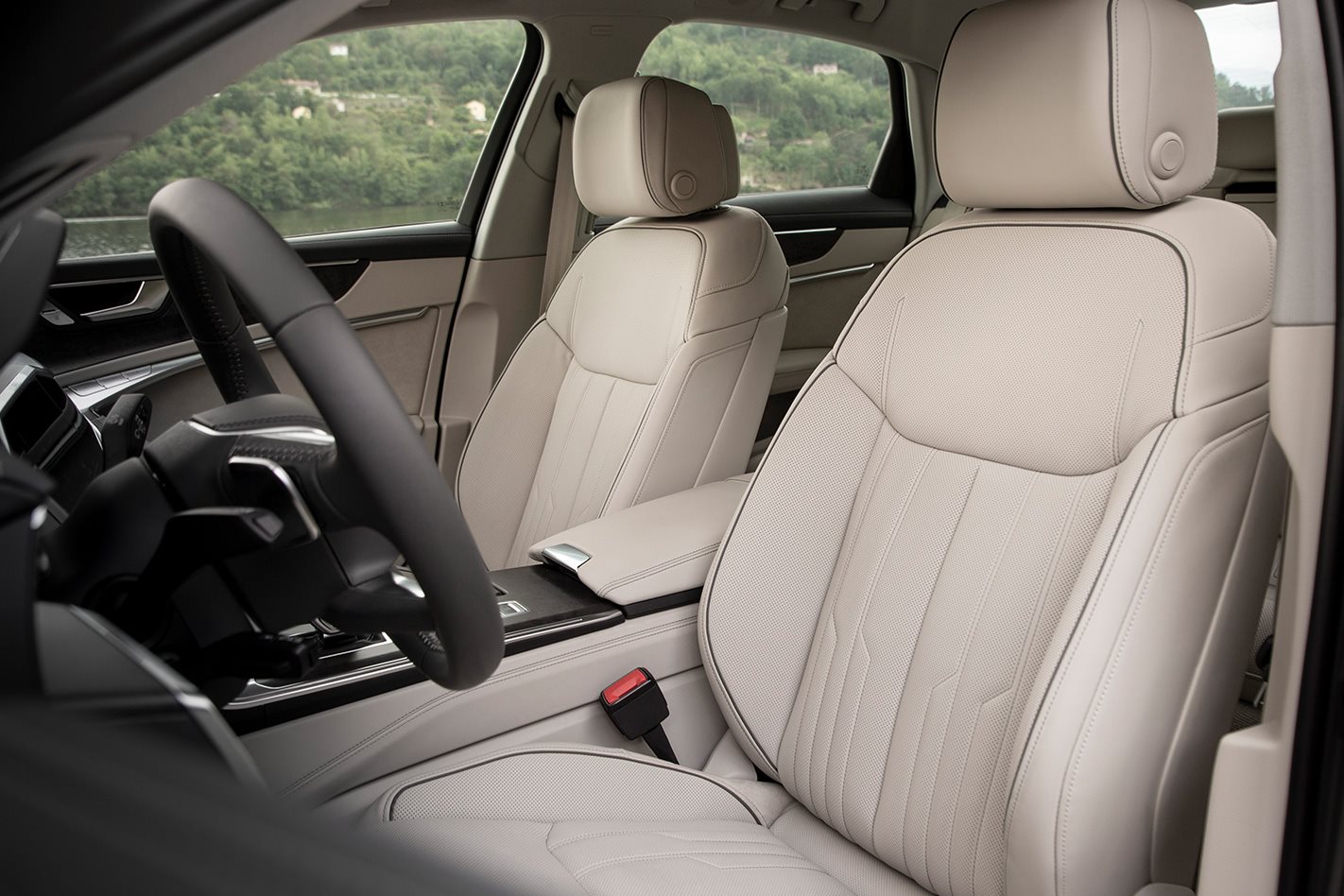 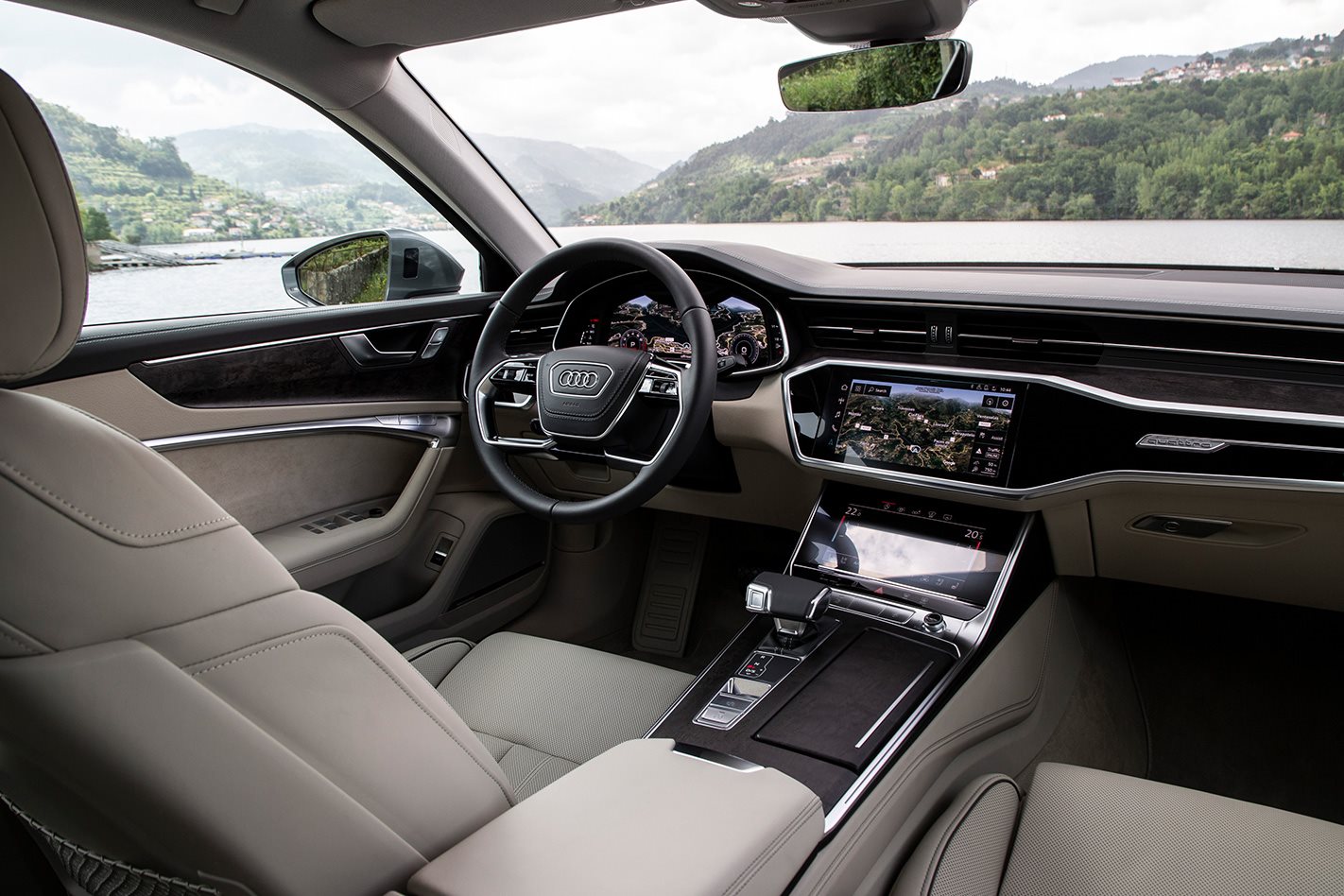 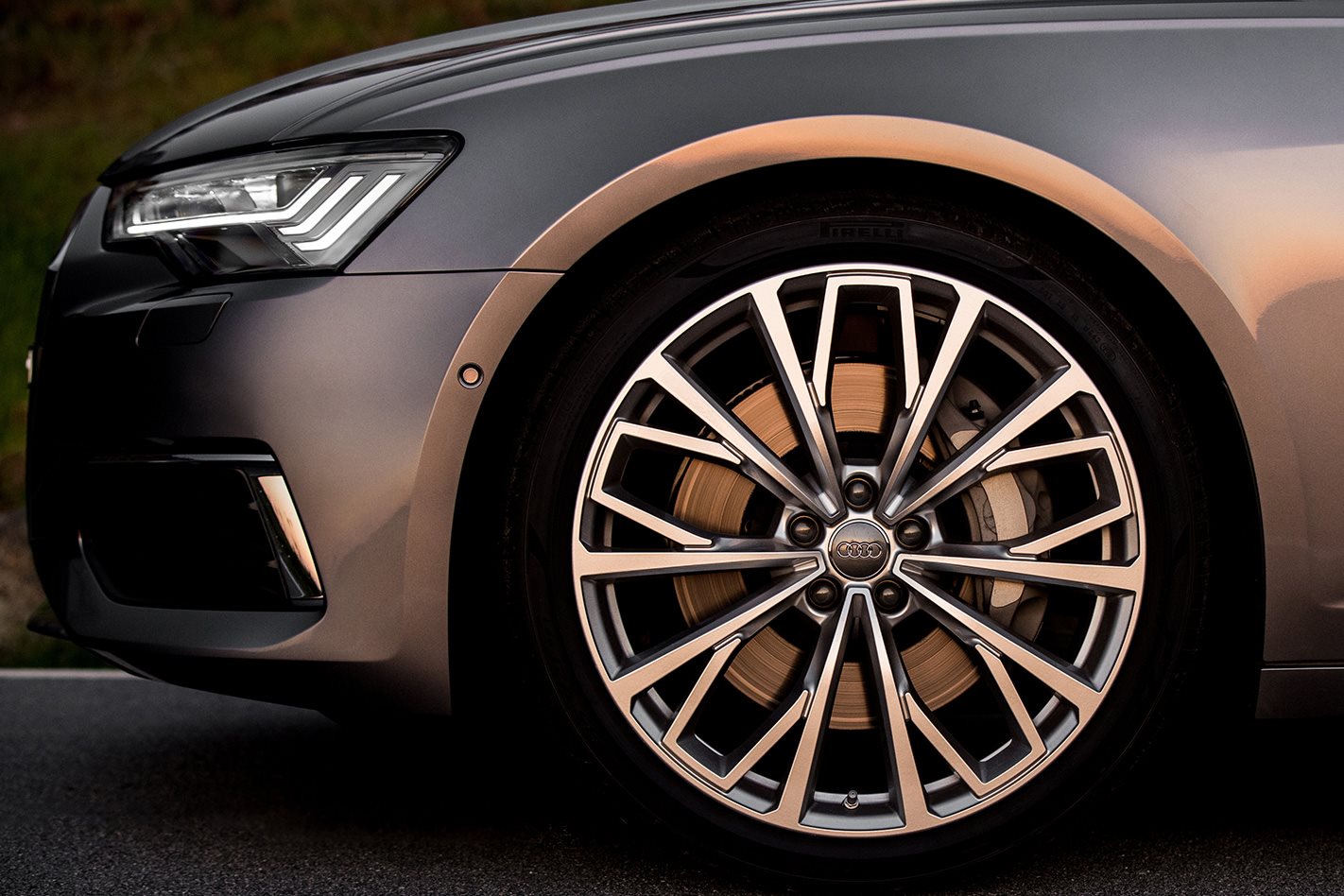 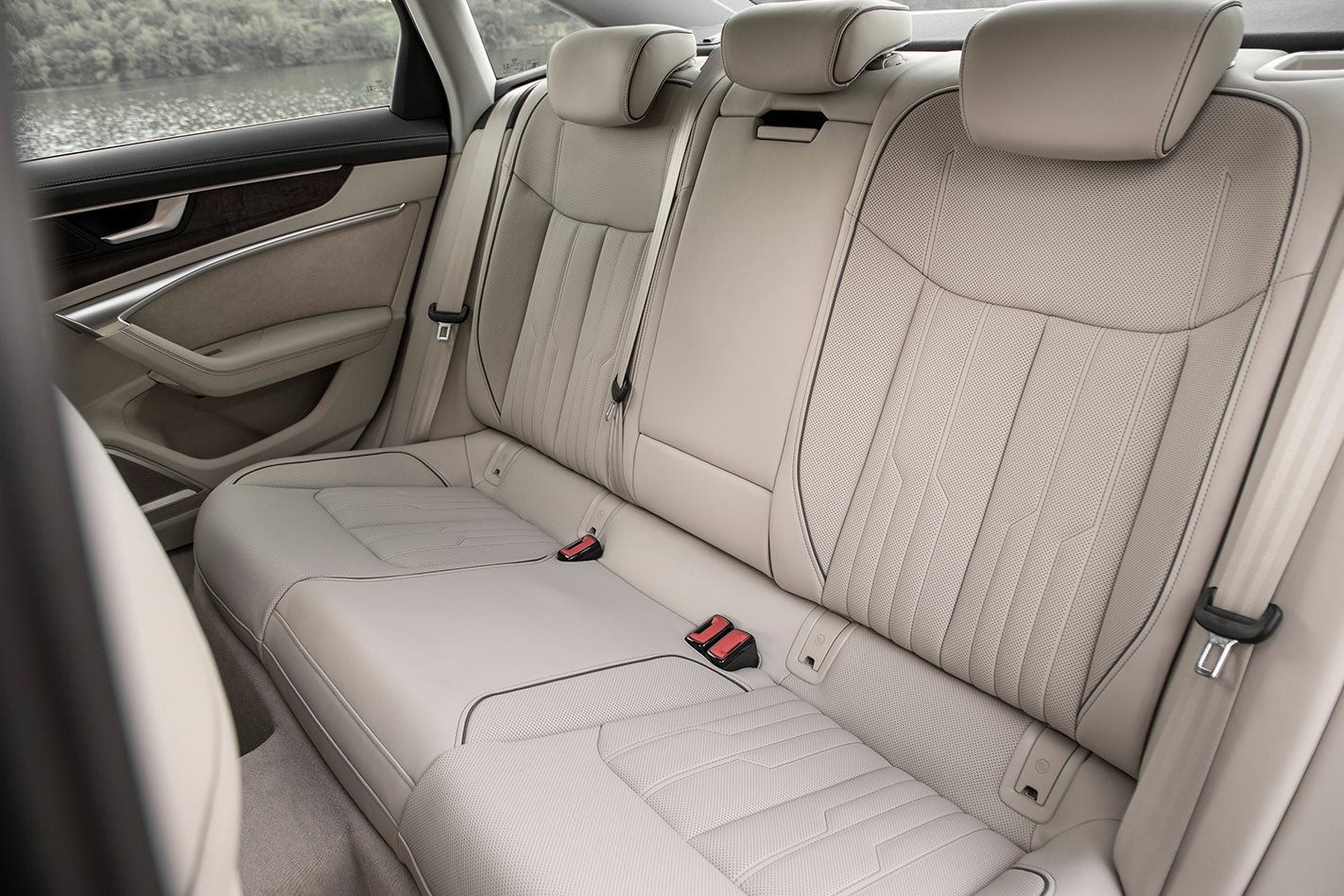 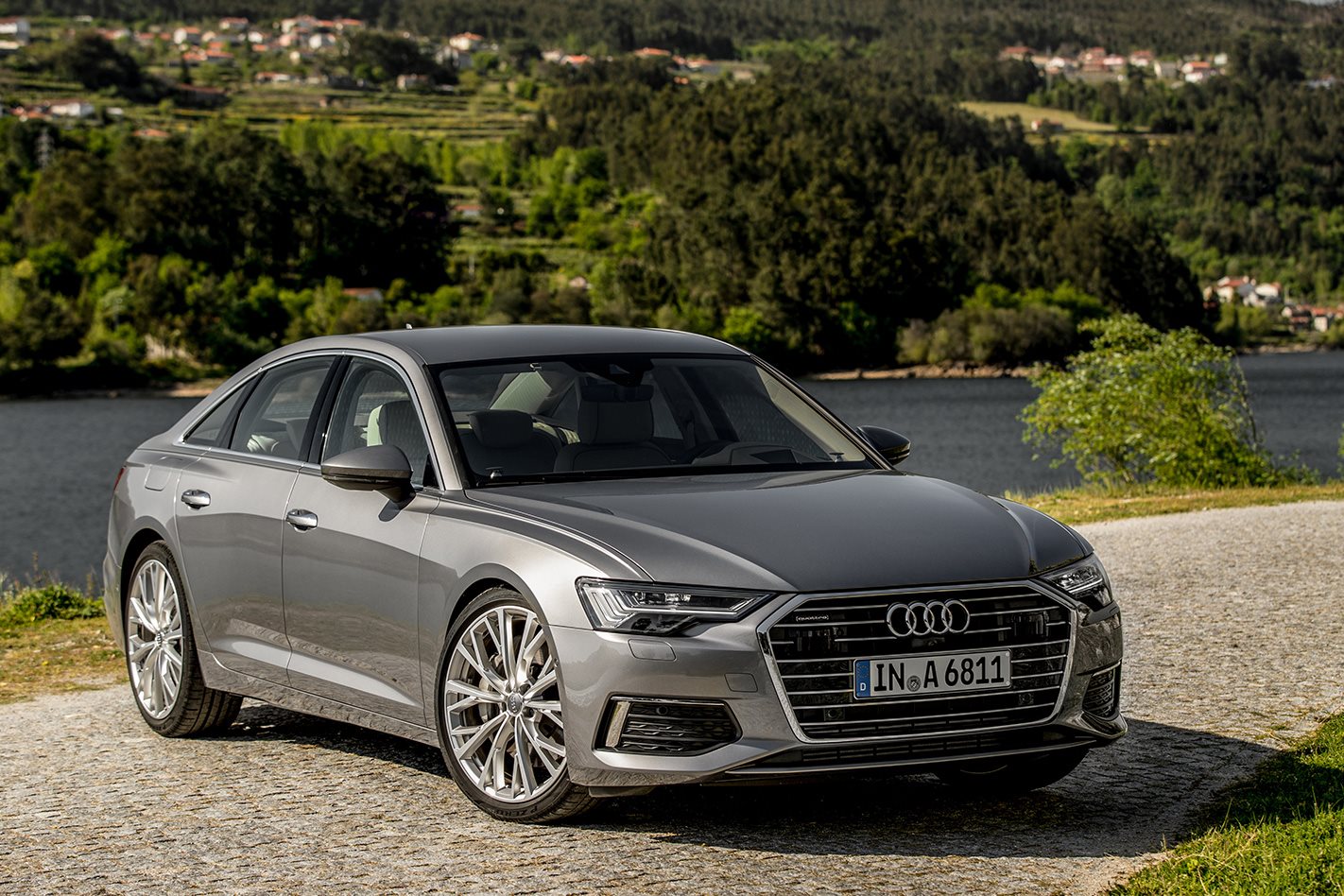 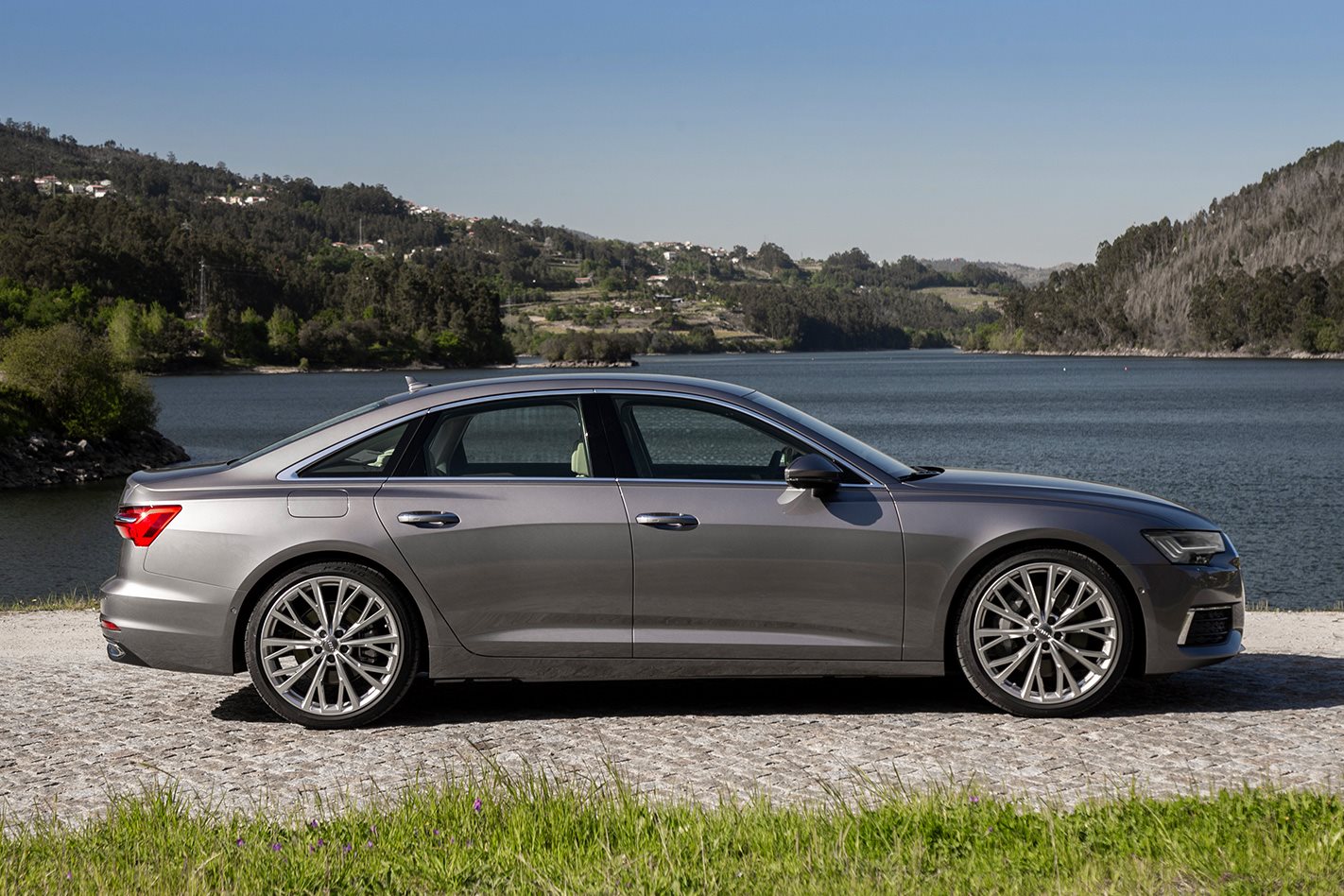 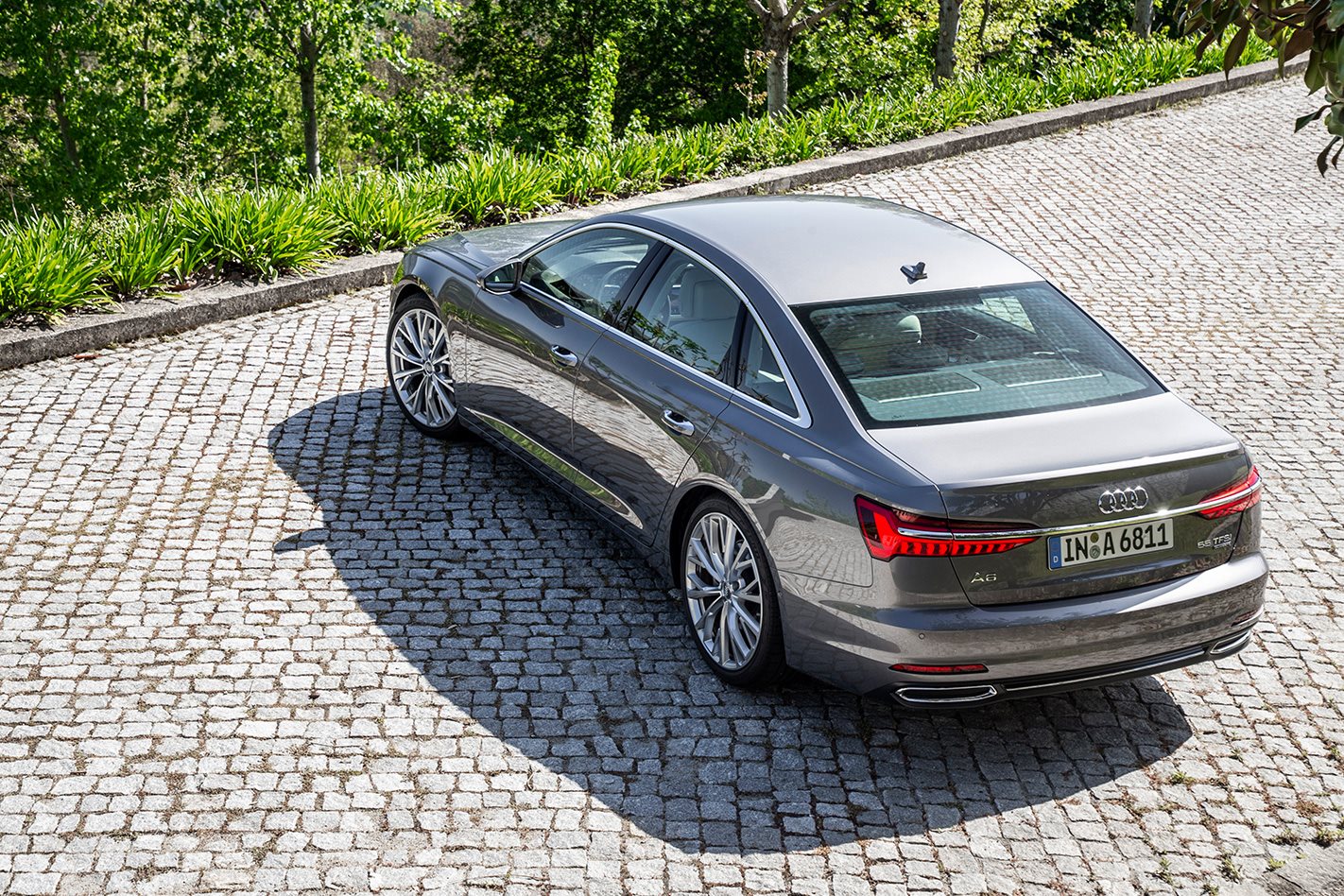 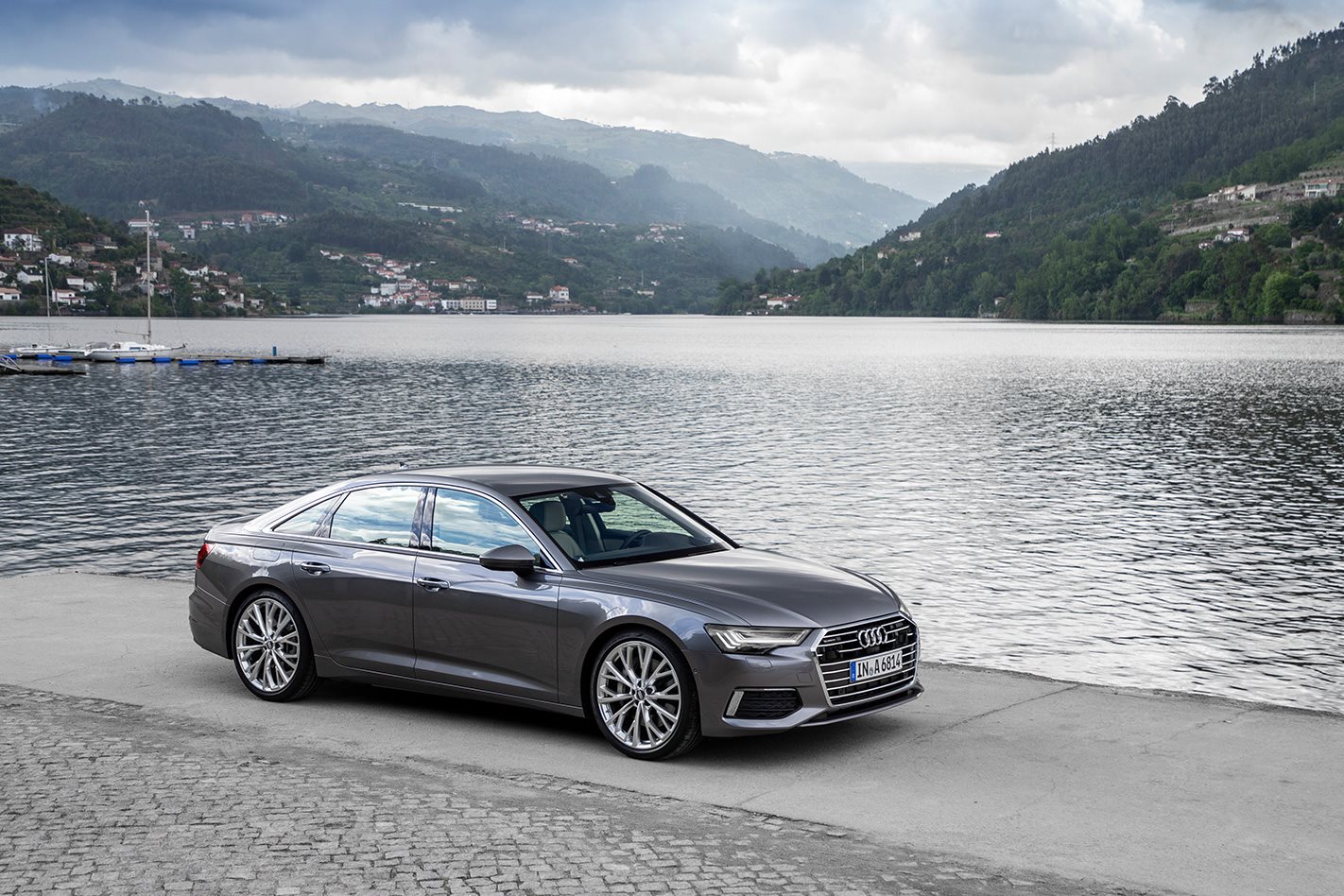