Almost a mirror image of its 39-year-old block-of-flats predecessor, this doppelganger G-Class is 99.999 percent new

An all-new generation of the iconic circa-1979 ‘G-wagen’ – Mercedes-Benz’s belated response to the game-changing 1970 Range Rover – still with separate-chassis construction but rejecting live-axle front suspension and arm-twirling recirculating-ball steering for a dramatically new design, now with a double-wishbone front end and, wait for it, rack and pinion steering! Not to mention a searing G63 AMG range-topper with arguably more bandwidth than any car on earth.

Piggy-backing off the new A-Class launch, life was never going to be easy for the doppelganger G-Class. But this SUV’s superficially wilful rejection of technology and progress disguises a towering achievement of marrying the past with the present, with more character than it’s ever had. 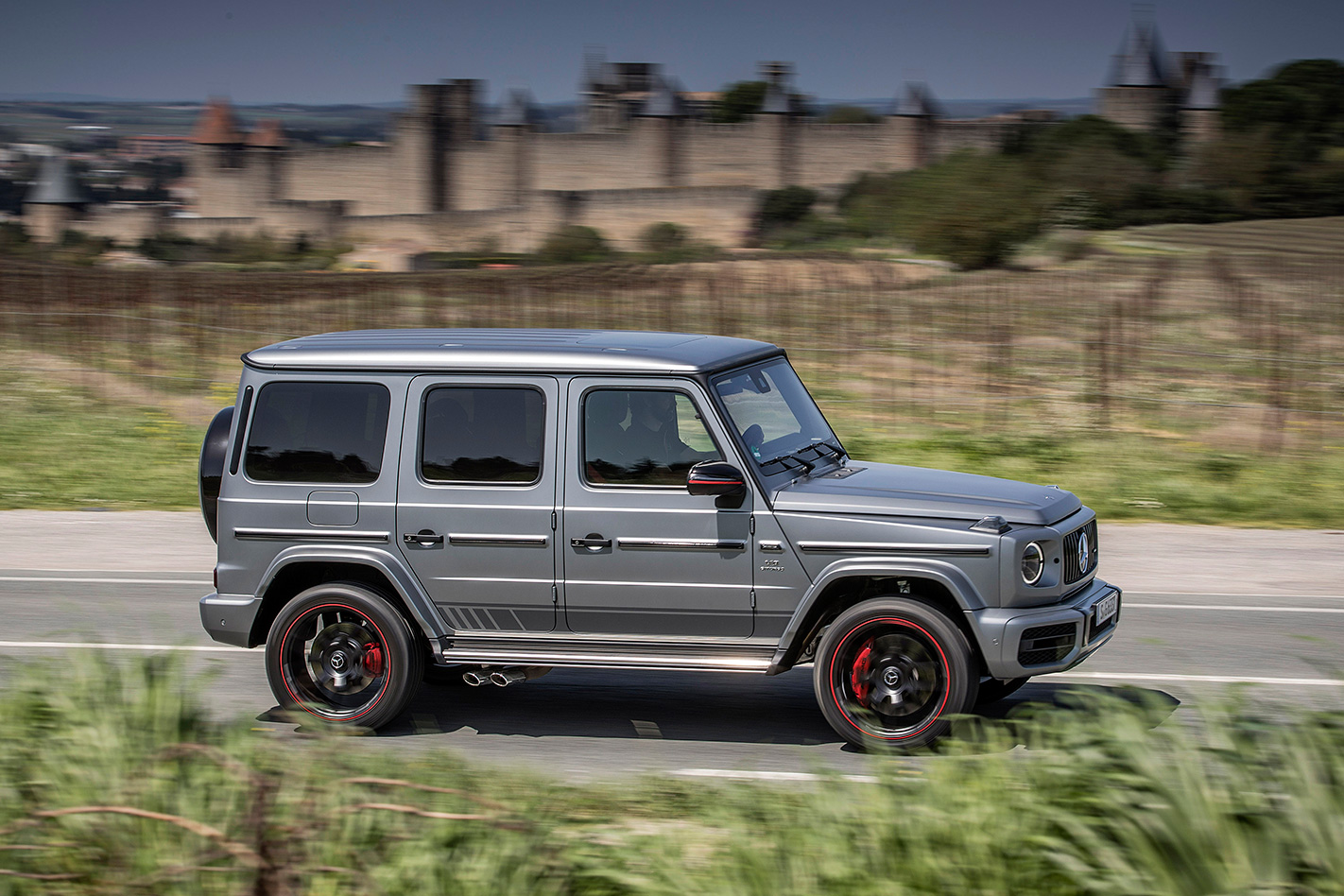 Feeling like it’s been engineered with the money-no-object ethos of Mercedes-Benz’s past, the new-gen G-Class – in particular, the wonderfully insane G63 AMG, which is the only variant coming to Oz – is one great big, flat-windowed surprise. It may appear antiquated – and, in terms of wind noise, sound antiquated – but underneath that brick-on-wheels body hides a hugely talented and lovable SUV, with so much character you could almost measure it in kilos. Even at $250K, this is dream-garage stuff – flawed yet fabulous.

IT BEGINS with a press of a button. Old-school metal door handles with the sort of push-button release most manufacturers relegated to history many decades ago.

And if you do it with your eyes closed, you can literally feel 1979 at your fingertips. Despite appearances, this new-generation G-Class is box-fresh from top to toe, yet its gloriously retro door handles are a direct DNA link to its 39-year-old predecessor. They’re exactly the same.

So, too, is the metallic clack of its doors as they close, and the startling cocked-rifle crack as its central locking auto-arms just above walking pace, which is exactly what G-Class buyers love. Again, with your eyes closed, you could easily believe you’ve just been imprisoned, panic-room-style, inside the decrepit confines of the old ‘G-wagen’. But those auditory nods to the past conceal a doppelganger SUV whose abilities have grown stratospherically.

That the new-gen G-Class looks so much like the fossil it replaces says volumes about what people loved about Mercedes-Benz’s brick-tastic icon. All the cues are still there – flat windows, exposed hinges, frog-eye indicators, external spare wheel, and barely a curved edge in sight. And some of them are even direct carry-overs, including the front headlight washers, spare-wheel cover, internal sunvisors and the dashboard’s metallic diff-lock switches, as well as those aforementioned door handles. But all the stuff that matters has been transformed. 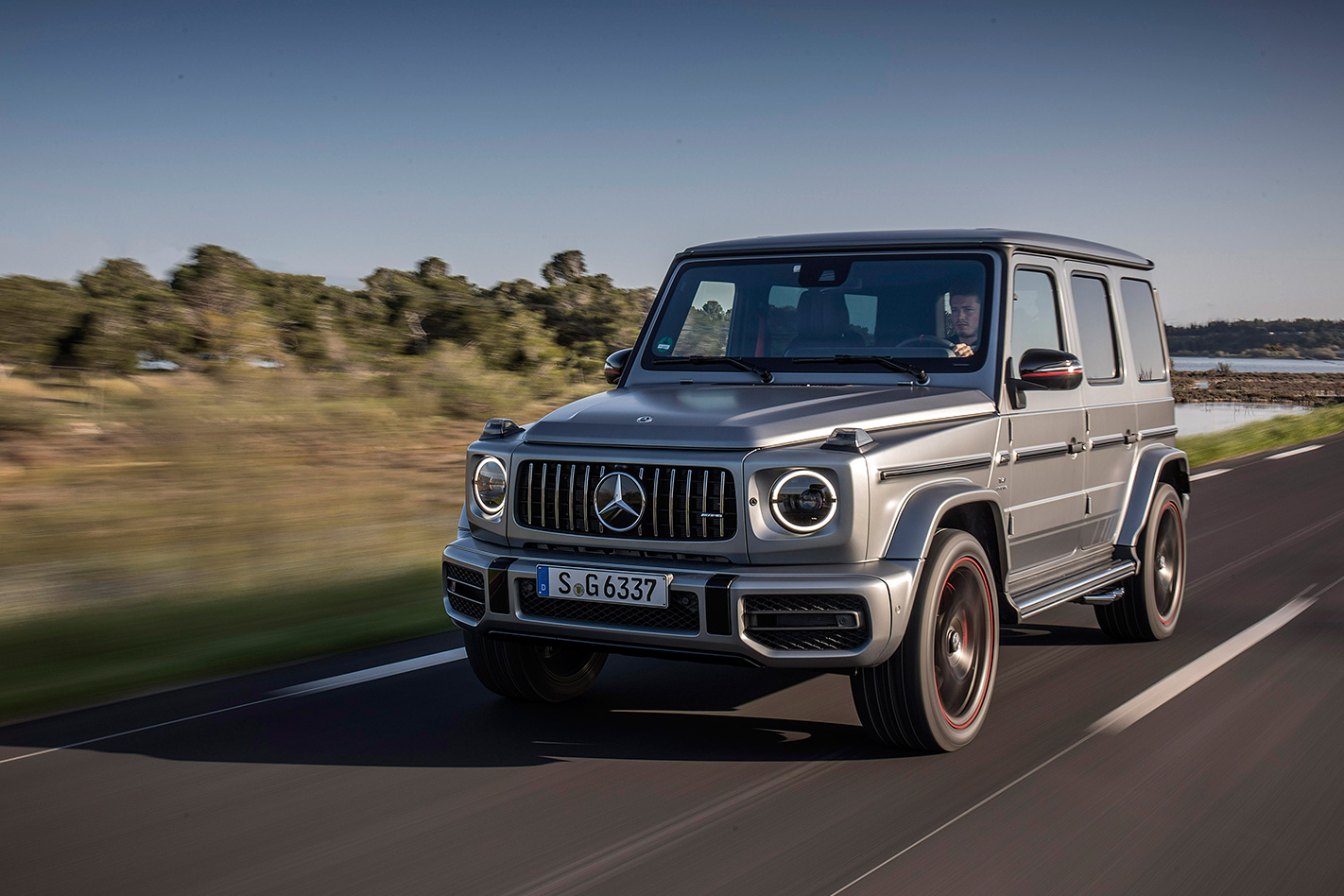 There’s still a ladder-frame chassis lurking underneath but it’s all-new, bolted to a body structure with an aluminium bonnet, front guards, doors and tailgate, for a total weight loss of 170kg, and a 55-percent increase in torsional rigidity. Neither of those improved numbers are particularly flattering, mind – in G63 guise, the G-banger still weighs 2485kg and its rigidity figure of 10,162 Nm/degree is well below what a modern monocoque can manage – but the new G feels mega-strong and virtually shock-proof.

There’s some ironic heritage at play too. Benz’s bluff bus might be 2018 in vintage, but its drag coefficient remains as old-world as polio. Simple physics dictate that an SUV that is taller than it is wide, despite having grown 64mm broader during its generational change, will struggle to better the old truck’s horrendous 0.54Cd. And so it proves with the new G63 AMG – a 0.532 drag coefficient, multiplied by an enormous frontal area of 3.217 square metres. No wonder there’s so much wind noise, another ironic nod to the past. Even Mercedes-Benz’s G-Class head of marketing, Ian Hadley-James, had a smirk on his face when he described the new G’s wind noise as “improved”.

It’s the componentry, however, that’s key to making the new G drive like something from this century. Hustling the previous G55/G63 AMG quickly was like going 10-pin bowling with a pumpkin – aimless, frustrating and, at times, potentially quite scary, as well as embarrassingly cumbersome at direction changes. Constant ESC intrusion was the only way to contain the waywardness of its non-independent suspension (yes folks, a live front axle) and recirculating-ball steering.

But this time around, we have an aluminium double-wishbone front end, rack-and-pinion steering with rack-mounted electro-mechanical assistance, and a brand new four-link live rear axle with a Panhard rod for lateral location. Not to mention anti-roll bars and adaptive dampers at both ends, three 100-percent locking diffs (just like before, and still the only series-production vehicle to do so) and an on-the-fly ability to switch between high- and low-range at speeds up to 40km/h. 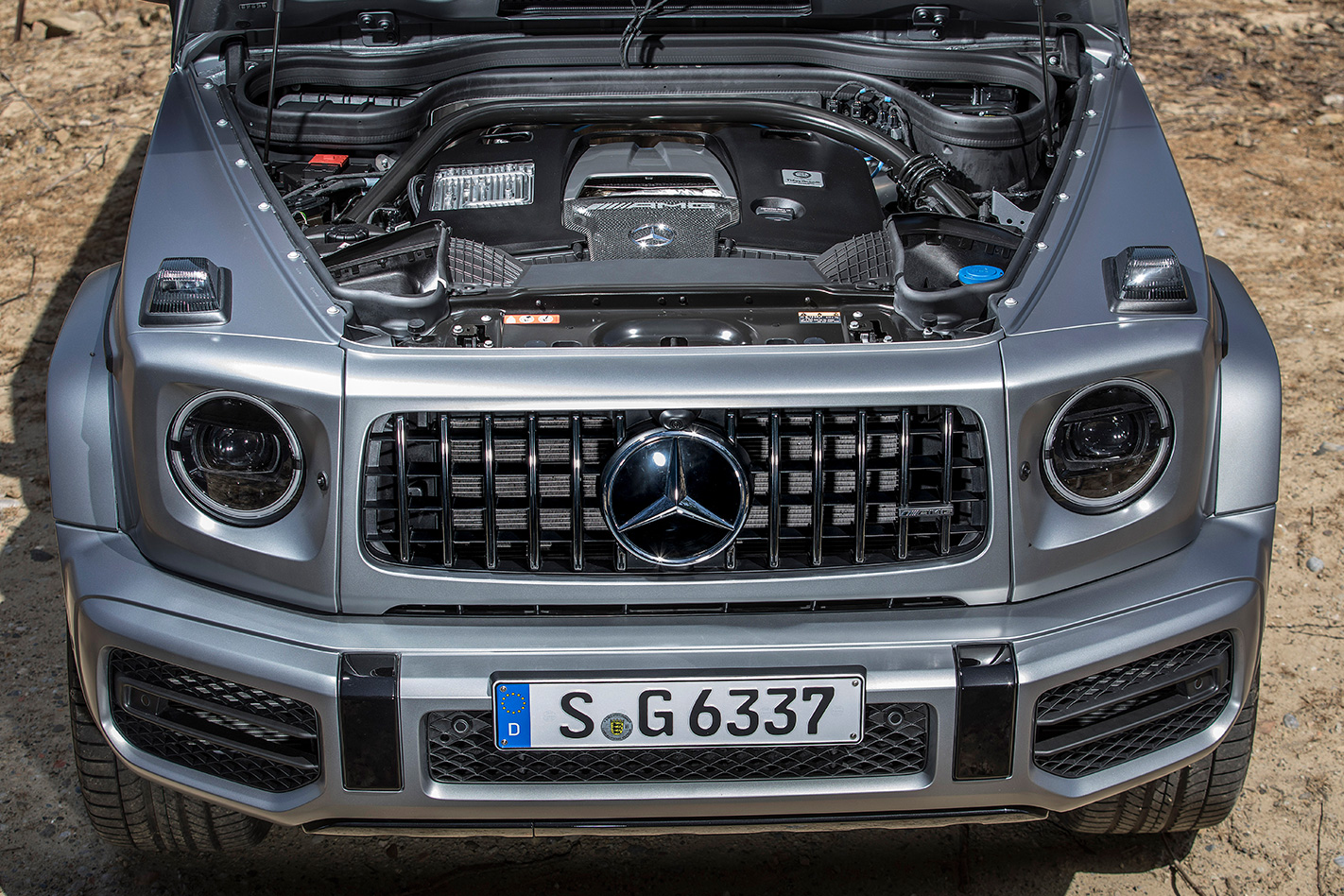 The new front suspension is mounted directly to the frame, gifting the new-gen G-Class 270mm of ground clearance at the front axle, in combination with improved fording depth (up 100mm to 700mm), improved approach, departure and break-over angles (by one degree each), and a far-superior 35-degree tilt angle (seven degrees better).

Which is all good to know when you’re burbling along in traffic at 10km/h. But, given the opportunity, even the G63 version (Australia isn’t getting the G500) has some serious off-road savvy, as our rock-strewn thrash in Trail mode (which disables ESC) in a 20-inch-wheeled example proved.

With loads of suspension travel and a loping, almost luxurious ride, the G63 is breathtakingly accomplished. And when the bends get tighter, there’s proper balance and steering precision to nail your line of attack, combined with the rear-biased delights of the G63’s all-wheel-drive system and ginormous 850Nm torque reserve.

Almost unbelievably, the same applies out on tarmac roads. Our Edition 1 test trucks (wearing huge Goodyear Eagle F1 295/40R22 tyres) defied any pre-conceived, unguided-missile fears by demonstrating a love of corners – both fast and slow – and a level of accuracy that’s in a different solar system to the old turd-burger. Likewise the comparative lack of ESC intrusion.

With nine ratios channelling its loin-stirring 430kW/850Nm 4.0-litre twin-turbo V8, the G63 is laugh-out-loud quick. Nailing the throttle from a standing start sees it squirm and shift around like a pissed-off rodeo bull, lifting its nose as it charges ahead and barking its fury through four gloriously non-PC side pipes. This hair-raising theatre is so goddamn addictive on so many levels that I doubt anyone will ever get close to AMG’s 13.1L/100km combined fuel-economy claim. 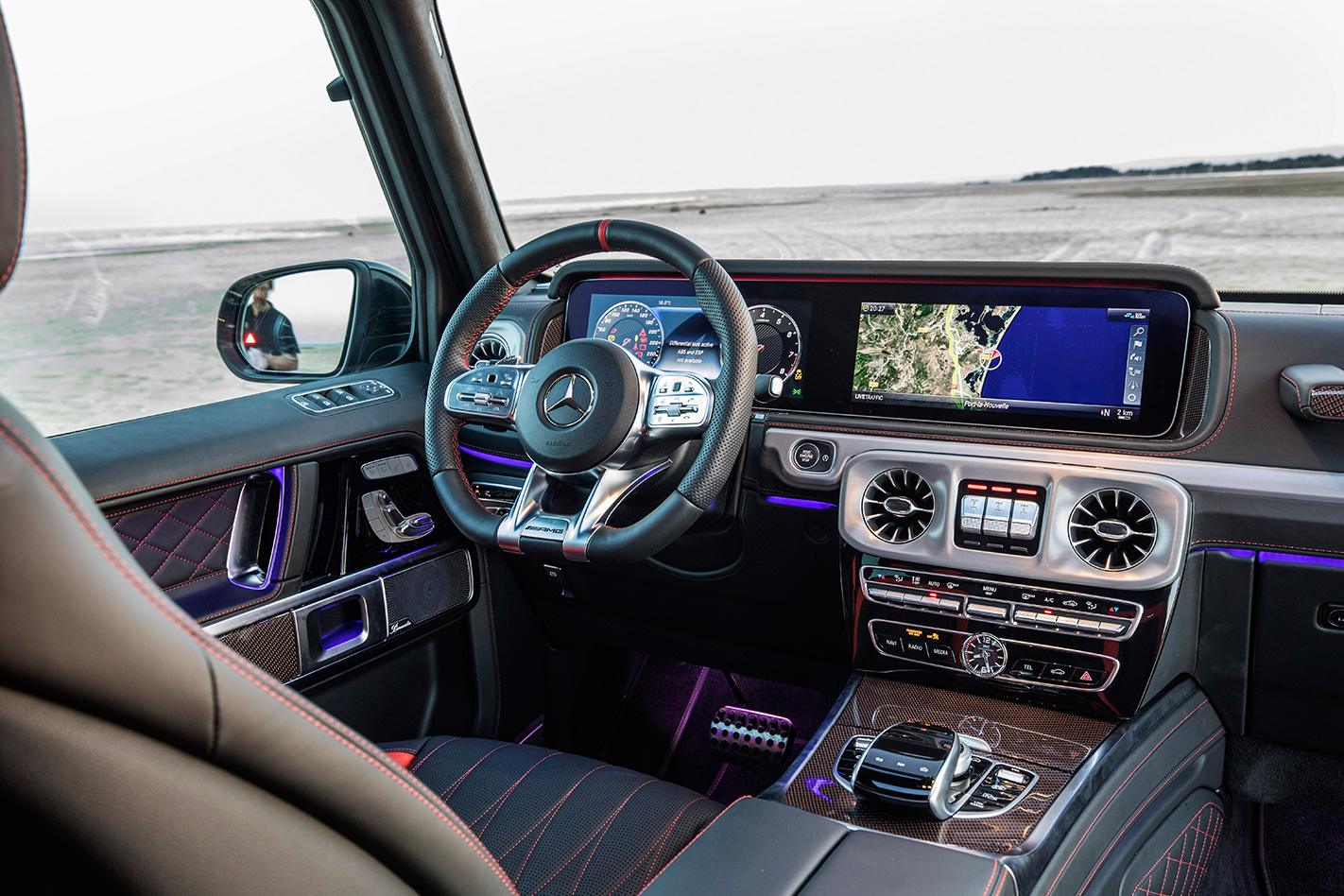 But it’s the cornering talent of this 2.5-tonne Tessie that garnishes the straight-line experience. With 2.7 turns lock-to-lock (spanning a rather quaint 13.6-metre turning circle) via Mercedes-Benz’s delightful new-gen three-spoke wheel, the G63 essentially goes where you point it. And if you drive it the way it desires – with a dose of patience in tight corners, trailing brakes in to pin the nose before squeezing copious amounts of 98RON juice into its combustion chambers and feeling the poised delights of 60-percent rear drive-bias – it’s not only quick but also fun. Even with Dynamic Select in Comfort mode, especially if you enjoy body roll.

Sport mode is the go, however, as it combines a still-supple ride with greater cornering poise and sharper transmission response. But there’s something deeply satisfying in belting down straight-ish back roads in Comfort, sports-exhaust button illuminated to unleash some backing-track thunder, marvelling at just how plush a G63’s ride is, even on 22-inch wheels. Even at 30km/h. It’s remarkable.

Want more? Porsche once shoehorned one of its engines into a Mercedes-Benz G-Wagen

Sport+ brings the most intuitive mix of drivetrain smarts and stability-control freedom, but you can play with all that in Individual mode, amping up the engine, tranny and exhaust while relaxing the suspension firmness and ESC reins. At least with the exhausts bellowing and the 15-speaker Burmester stereo cranking Rammstein, you don’t notice the wind noise so much.

Despite all the wonders of modern sound deadening and noise cancelling, this thing has more front than a cyclone, and on a gusty day, the wind rush can be remarkably voluminous. Yet the G63 powers ahead, rock-steady and rock-star ready, with the pick-power to pull up forcefully if a star-struck fan happens to throw him/herself into its path. Vented and drilled 400mm front discs with six-piston calipers, matched to 370mm rears, will do that to a car… I mean truck. 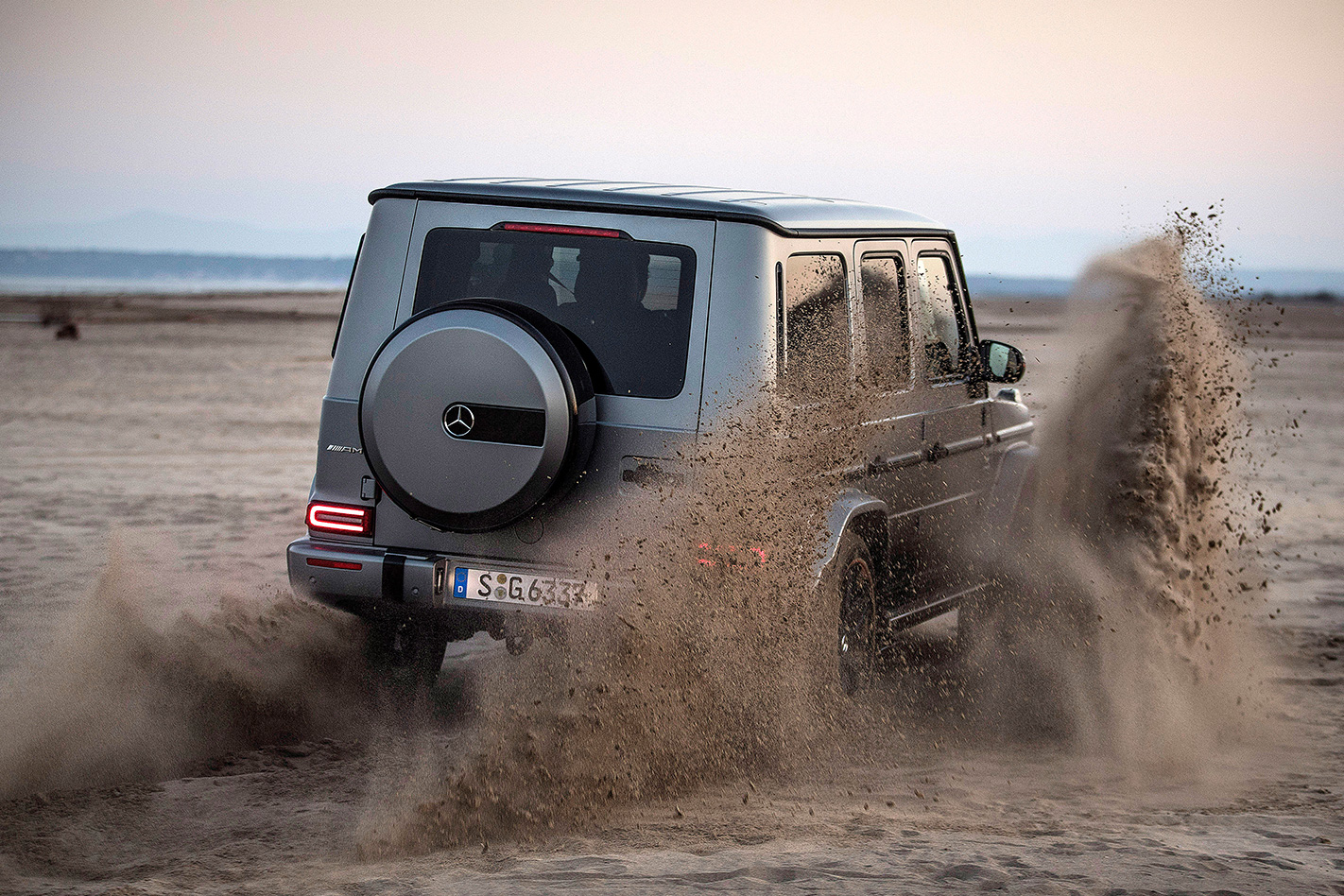 There’s far less pay-off than there used to be in the G63’s body-on-frame interior. Sizeable improvements in cabin space – especially the 150mm expansion in rear legroom – make this mother trucker an eminently liveable and likeable place to spend time. You can’t discount the vision-enhancing benefits of those flat windows and all that seating height, though the posh new G-Class does cede some modernity to the everyman’s new-gen A-Class. You won’t see any MBUX theatrics in this SUV’s Widescreen Cockpit display – merely the same stuff you get in an E- and S-Class – and now that we’ve sampled the sleek, stylish minimalism of the new A’s new-gen column stalk and gear-selector wand, the older gear in the G feels slightly parts-bin. Which is all an illusion, of course, because this beast is no Frankenstein.

Instead, it’s a spectacular achievement. I personally detested the old heap, yet feel blown away by the bandwidth of the new-gen G63, and the immensity of its character. There are few vehicles on earth that could achieve as much as this one can, with all the menacing, yet cuddly feels that a Grisly Bear gives you before it rips your face off.

The steadfast determination of the engineers in Graz, Austria (where the G is predominantly hand-built) to keep the G-Class true to its heritage, and the input from AMG into making this truck not drive like one, has produced a mega-fast SUV that feels wonderfully old-school Benz. It’s as if money was no object, just like it never used to be, when developing the new-gen G-wagen. In much the same fashion that money has never been a hurdle for those who aspire to G-Class ownership. Only this time, it’s actually worth the coin. 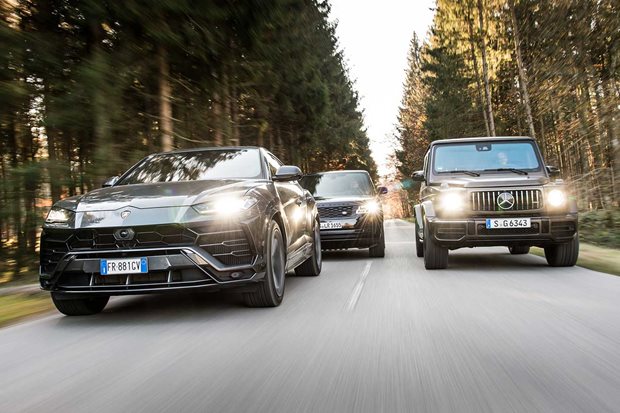 Mega mumbo and physics-defying dynamics cloaked in a popular, luxe SUV body. Is this the future of ‘daily’ performance? 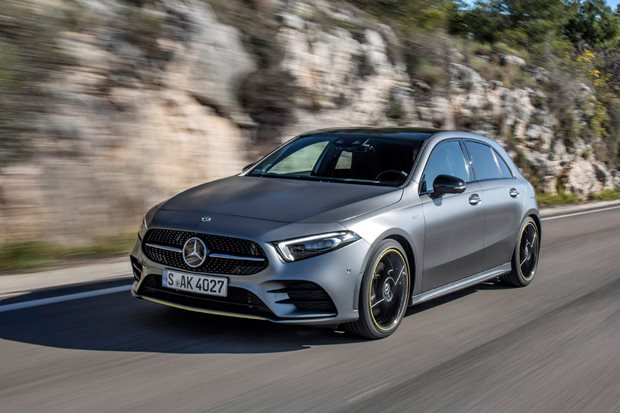 With S-Class safety and greater connectivity than any of its stablemates, the new-gen A-Class aims for the stars 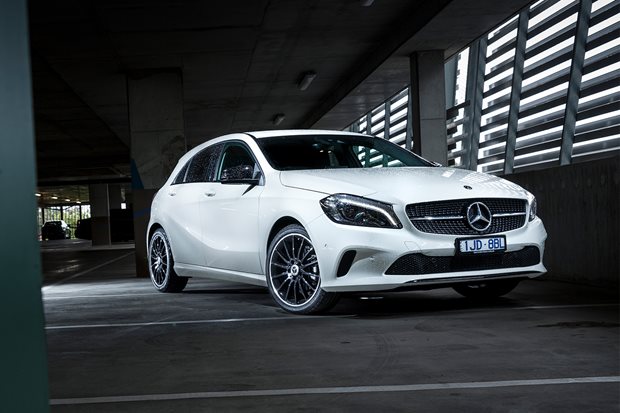 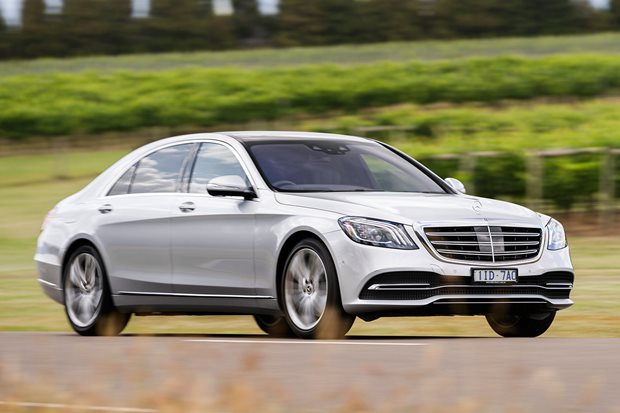 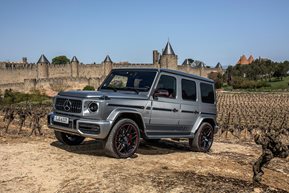 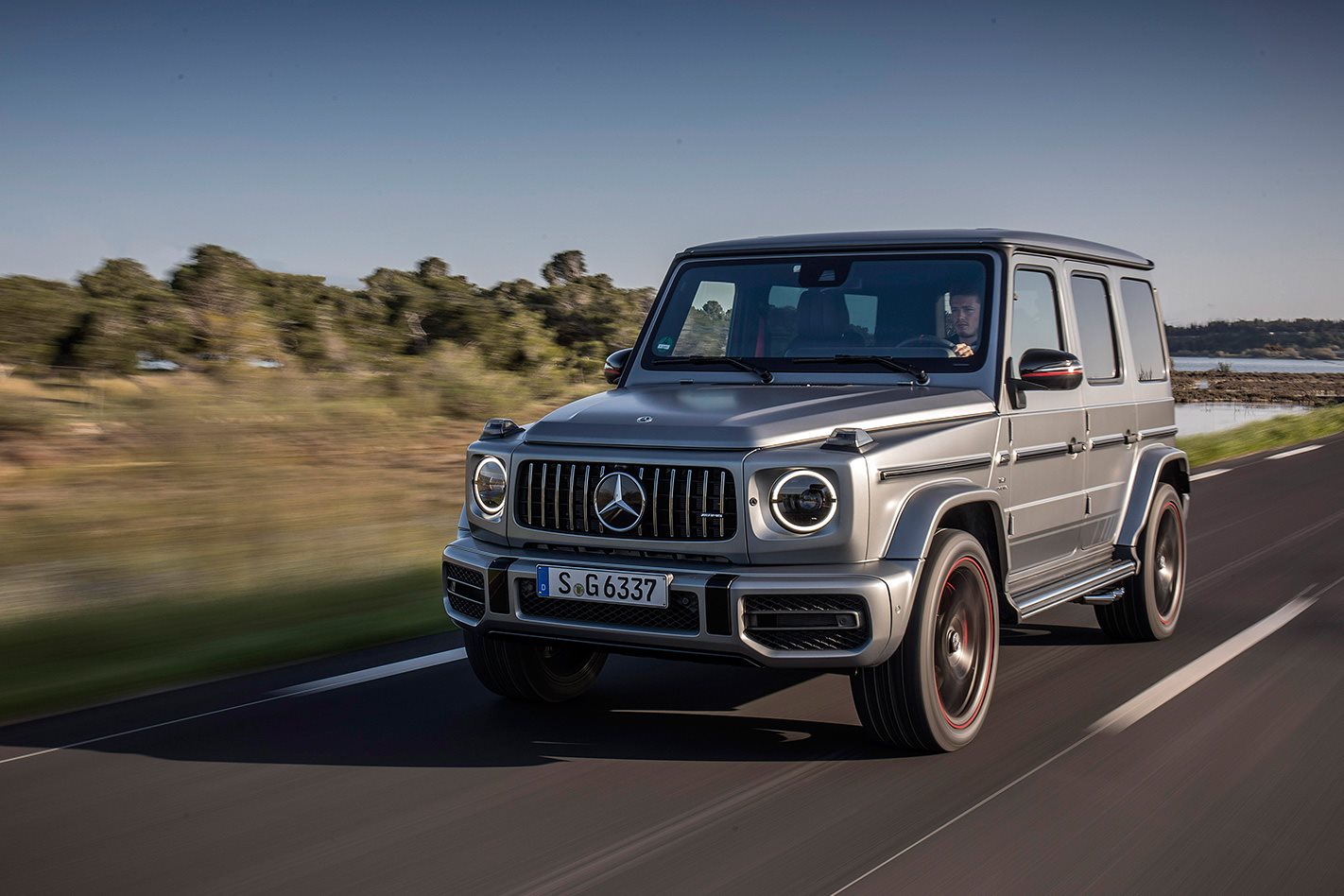 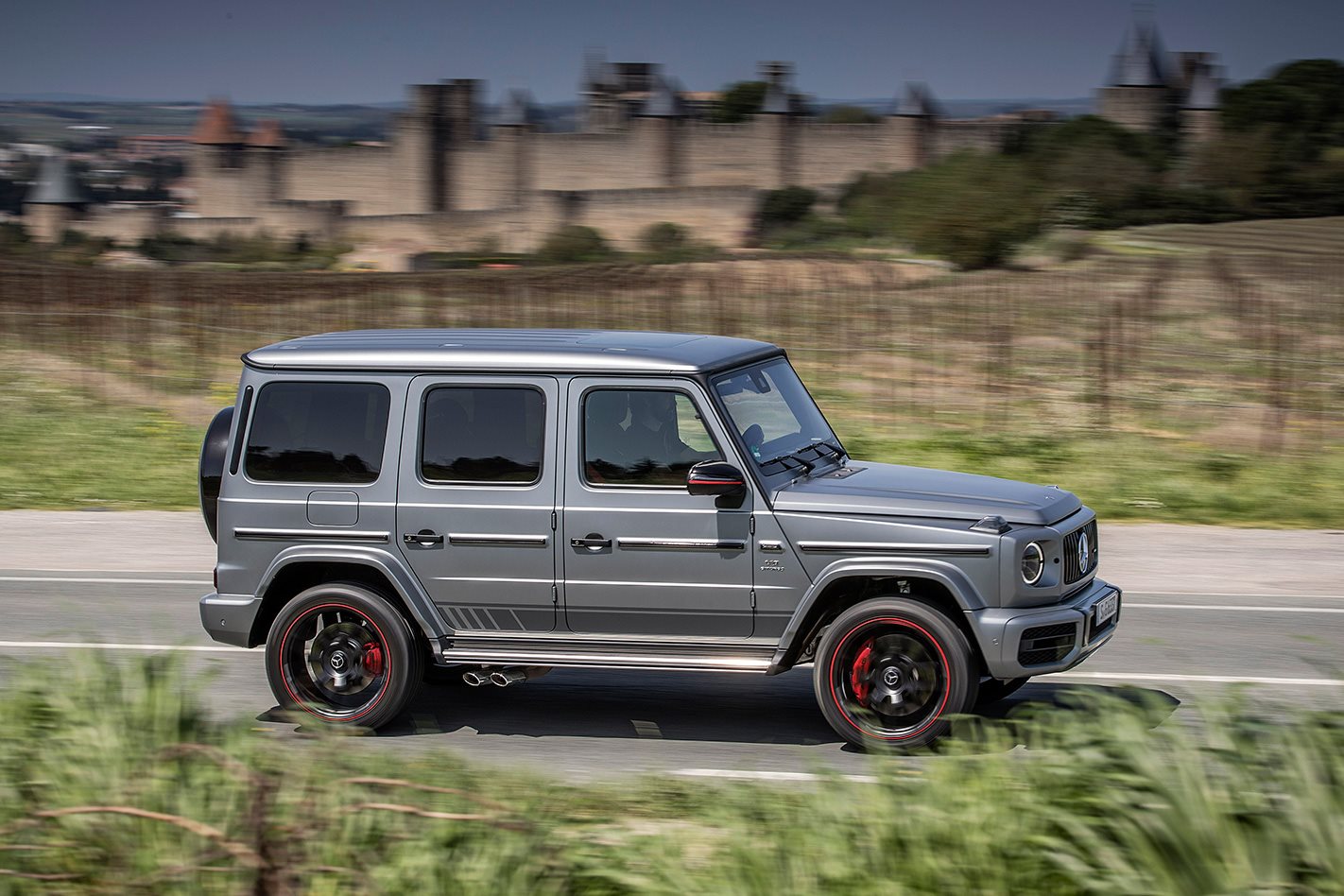 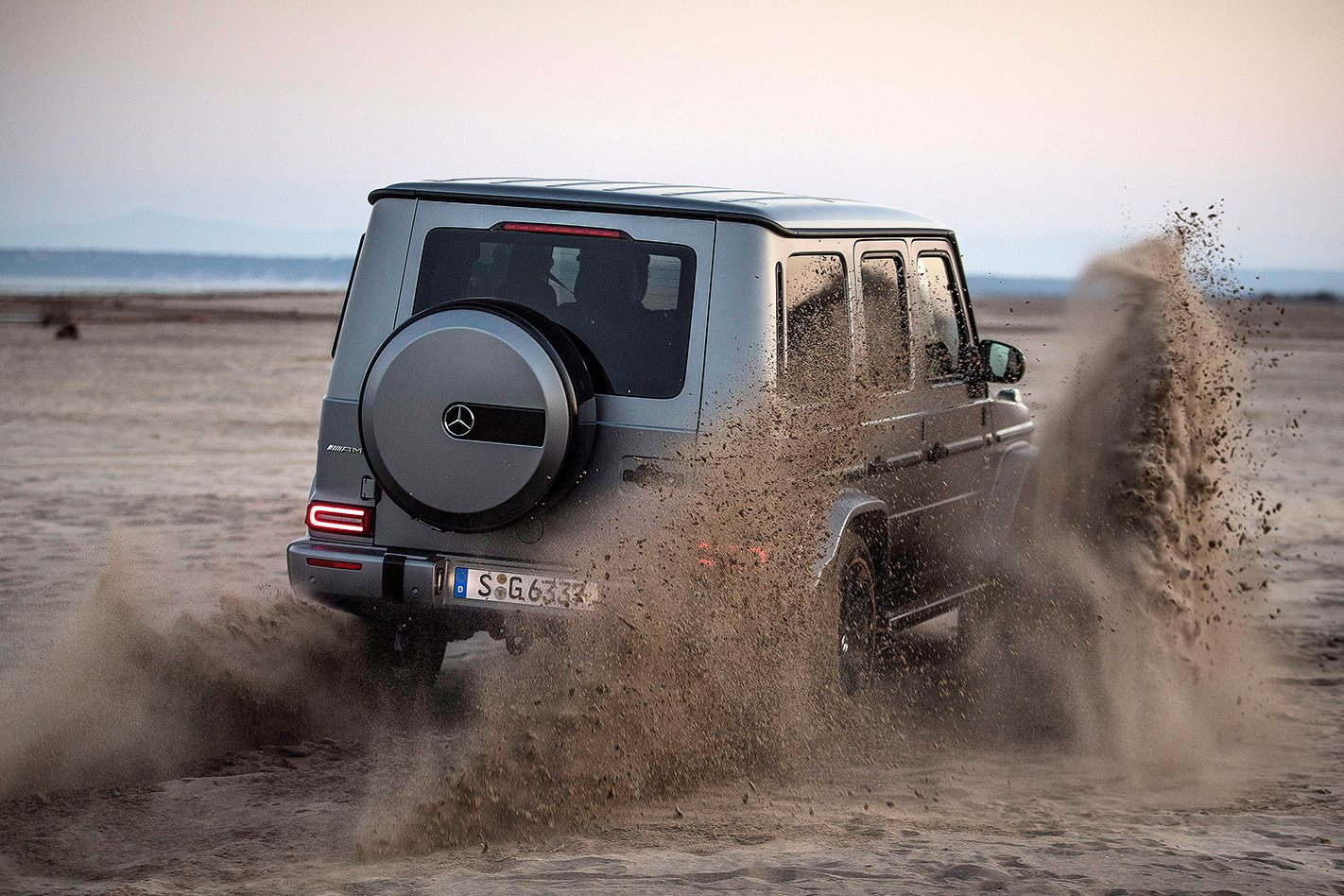 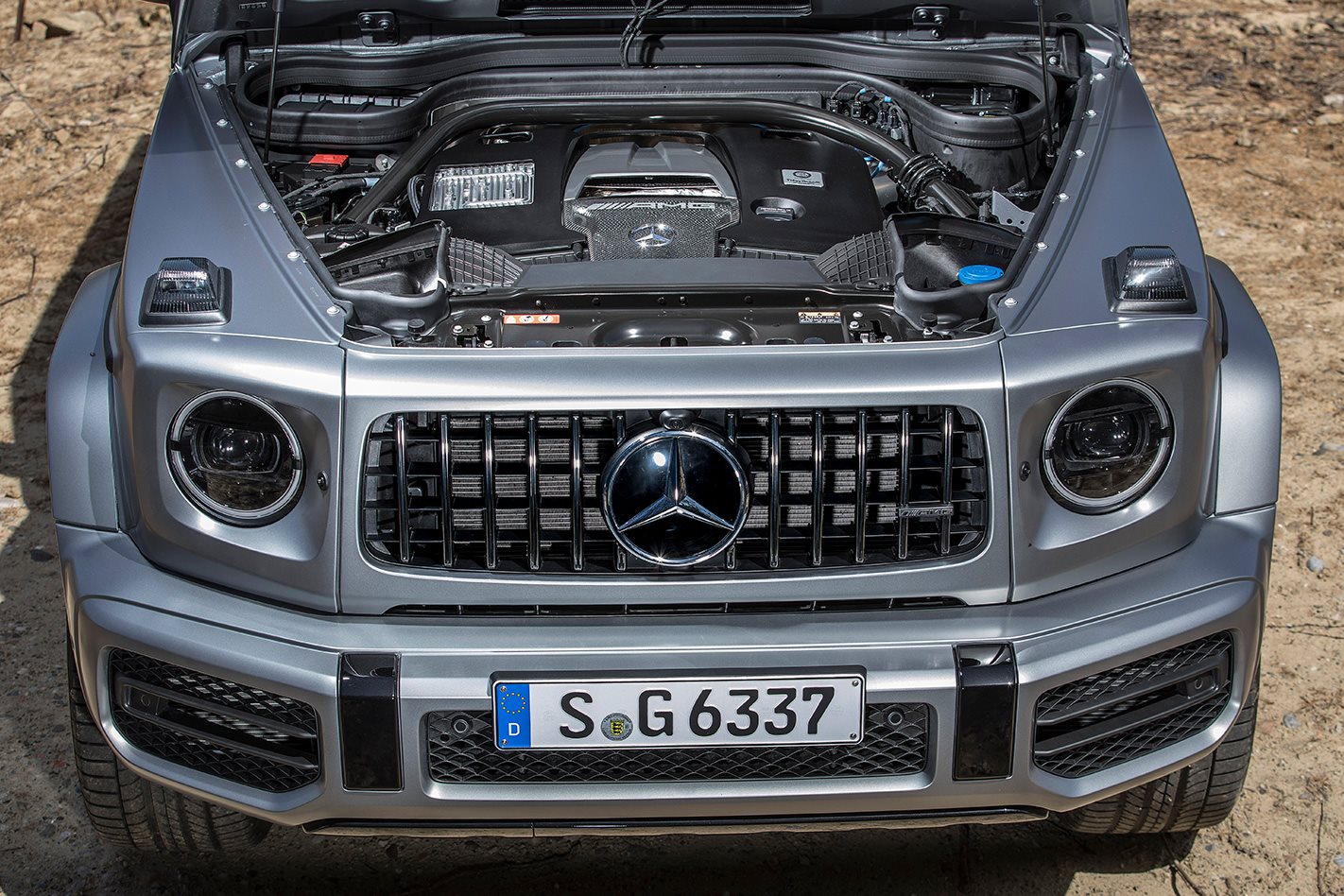 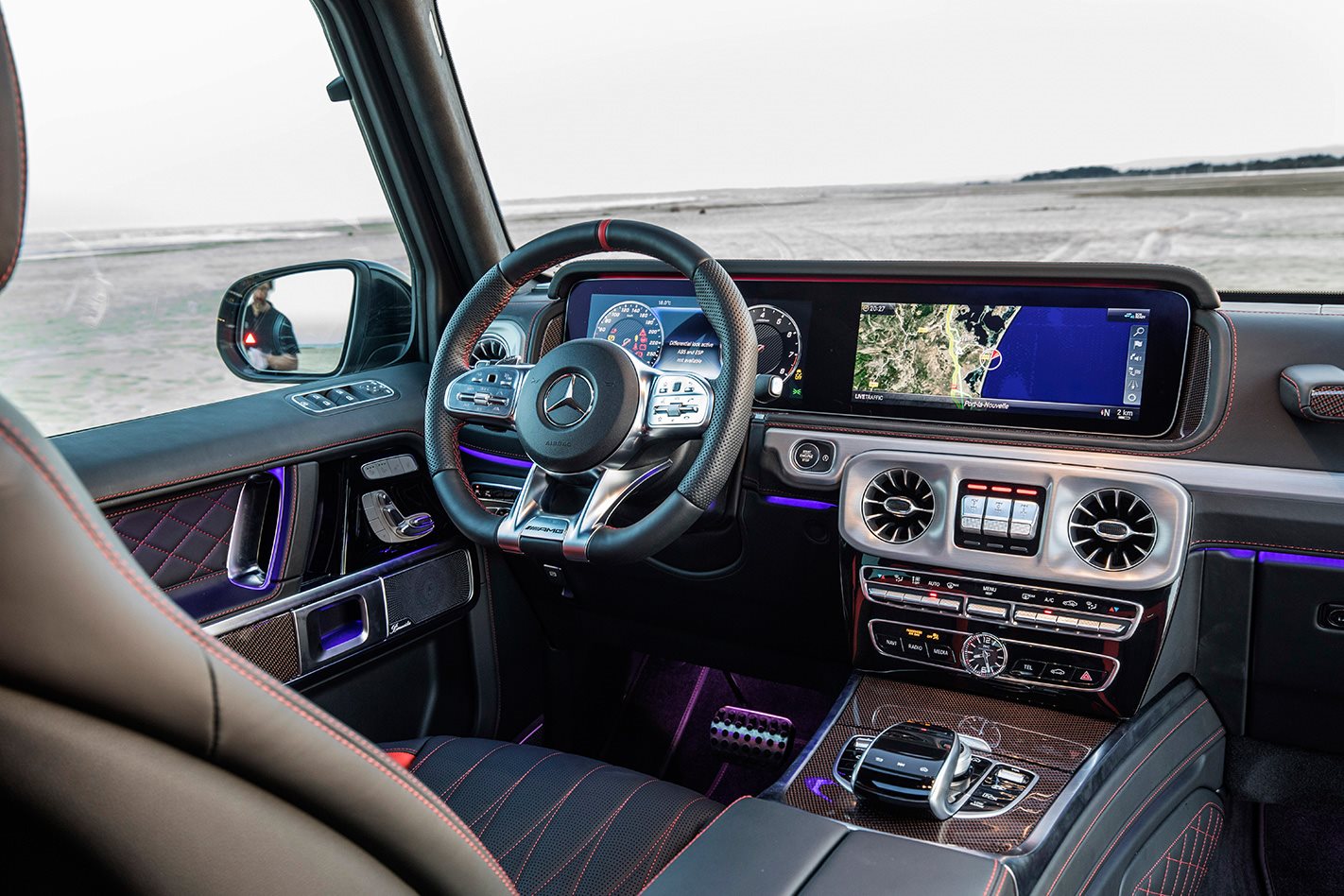 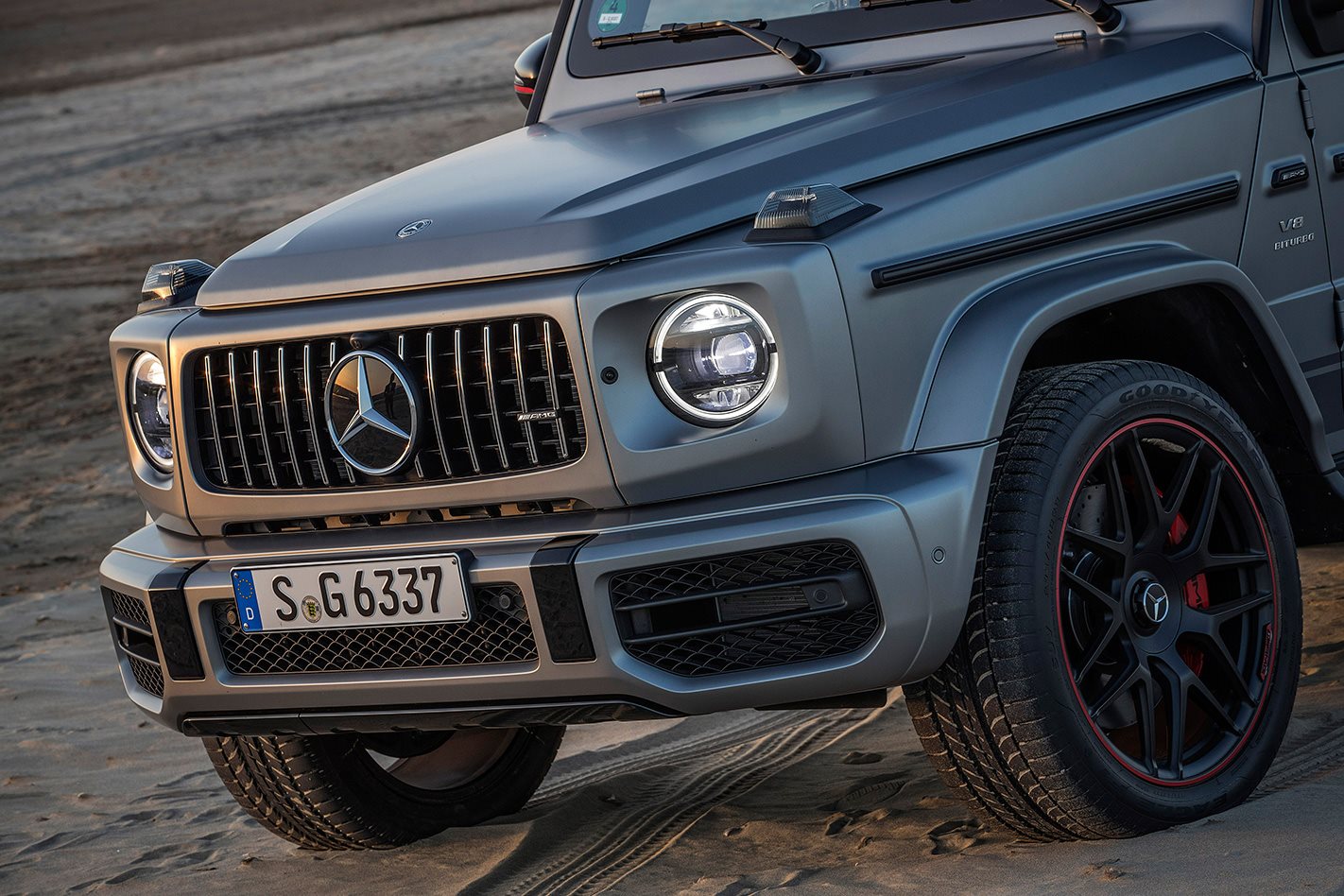 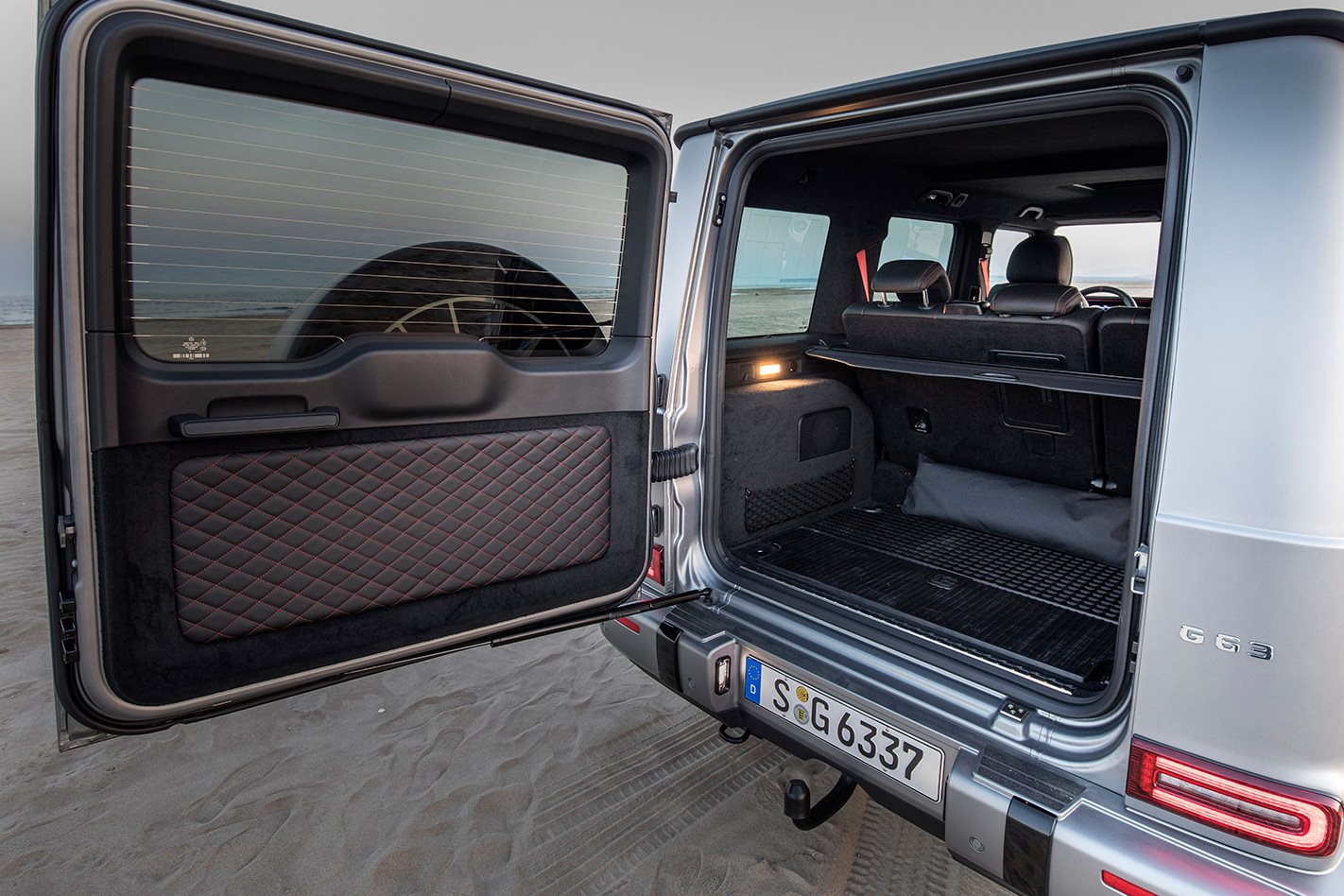 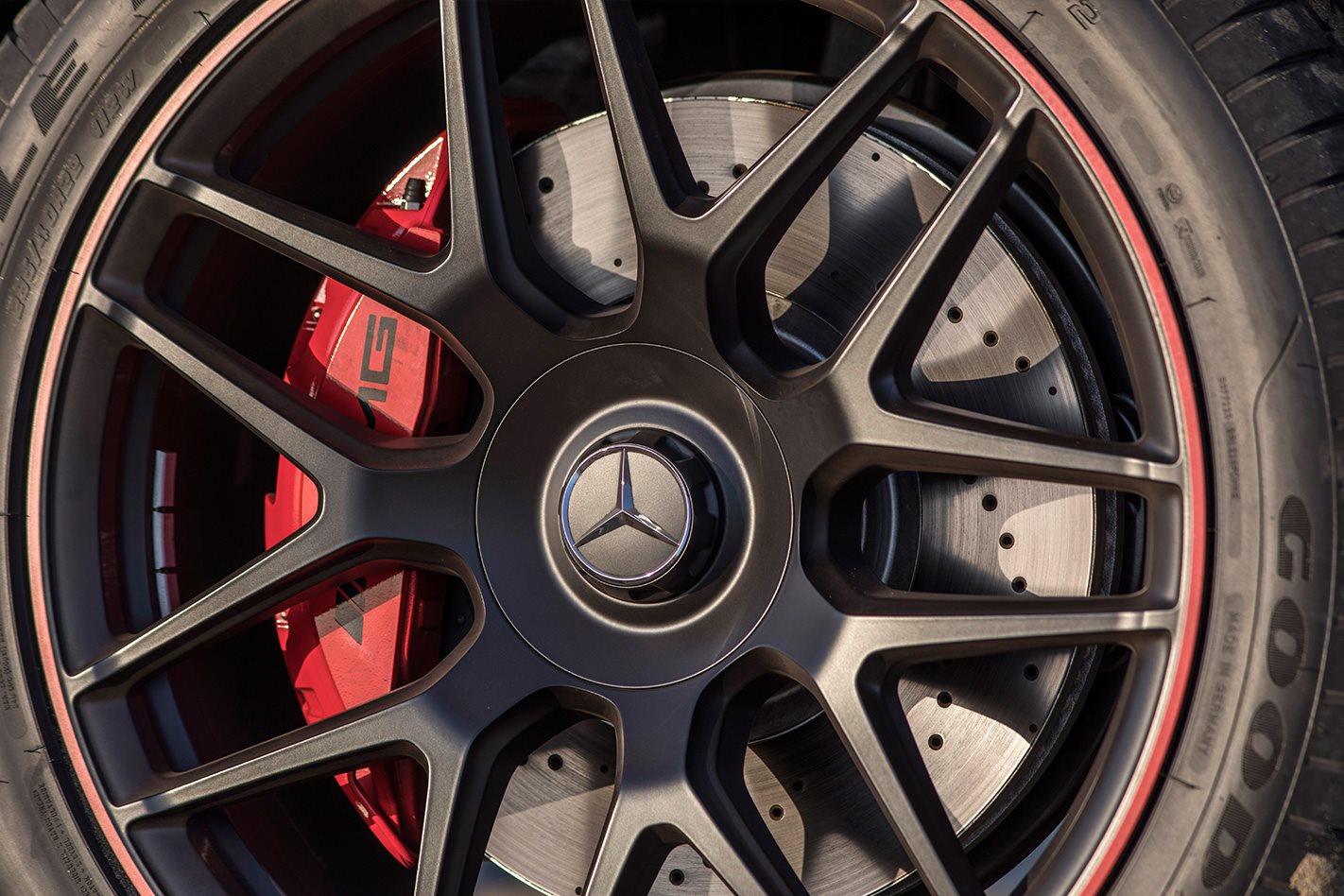